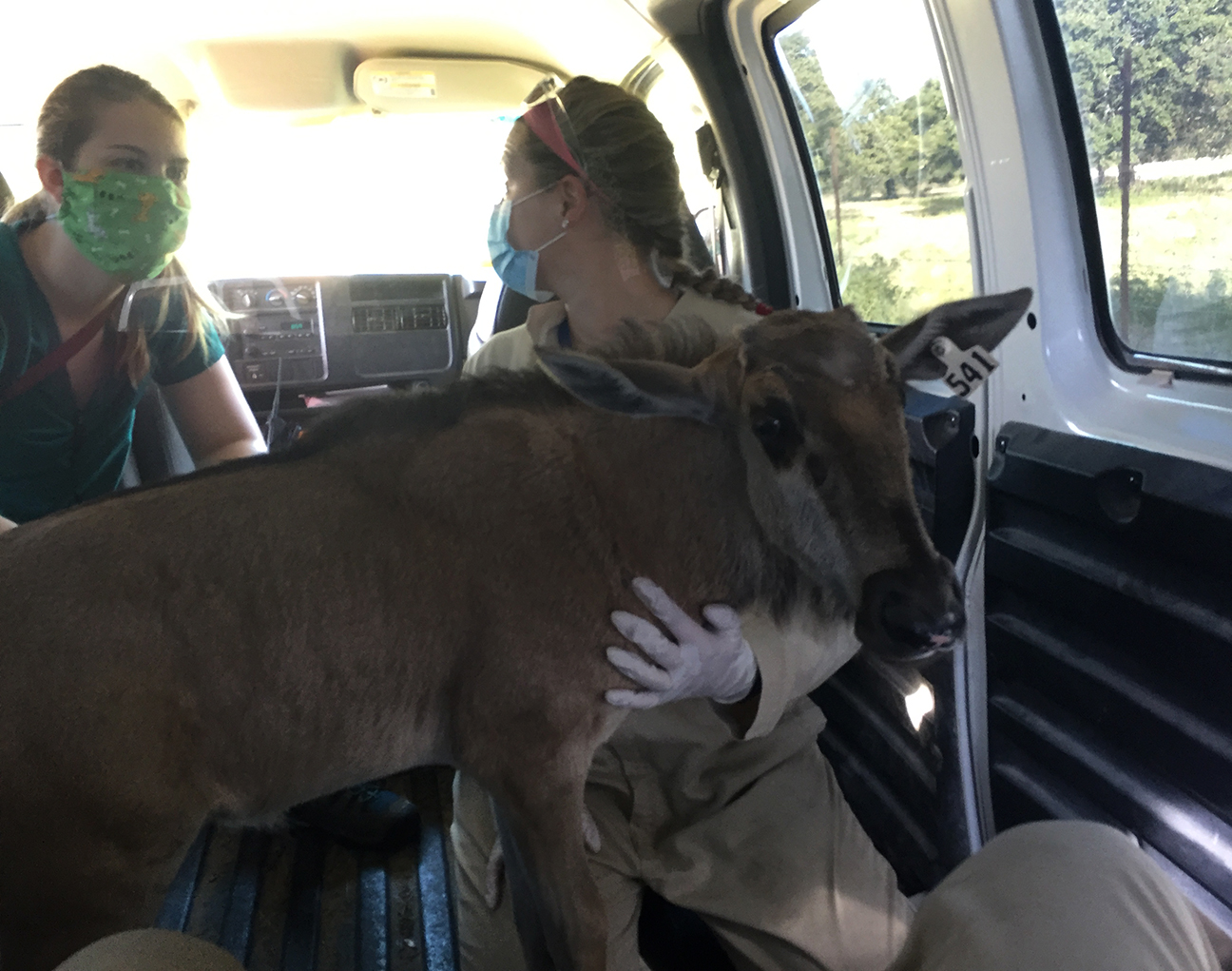 It may seem like a fairy tale existence for the animals that live at Fossil Rim, but they are not immune to hardship.

Look no further than a wildebeest calf that found itself without a mother earlier this year.

“We have not hand-reared many wildebeest; we’d previously done so for one since I started working here,” said Director of Animal Health Dr. Holly Haefele. “They are notoriously challenging neonates. They really bond with their mothers quickly and are standing and by mom’s side within minutes of birth, plus they are a very herd-oriented species. 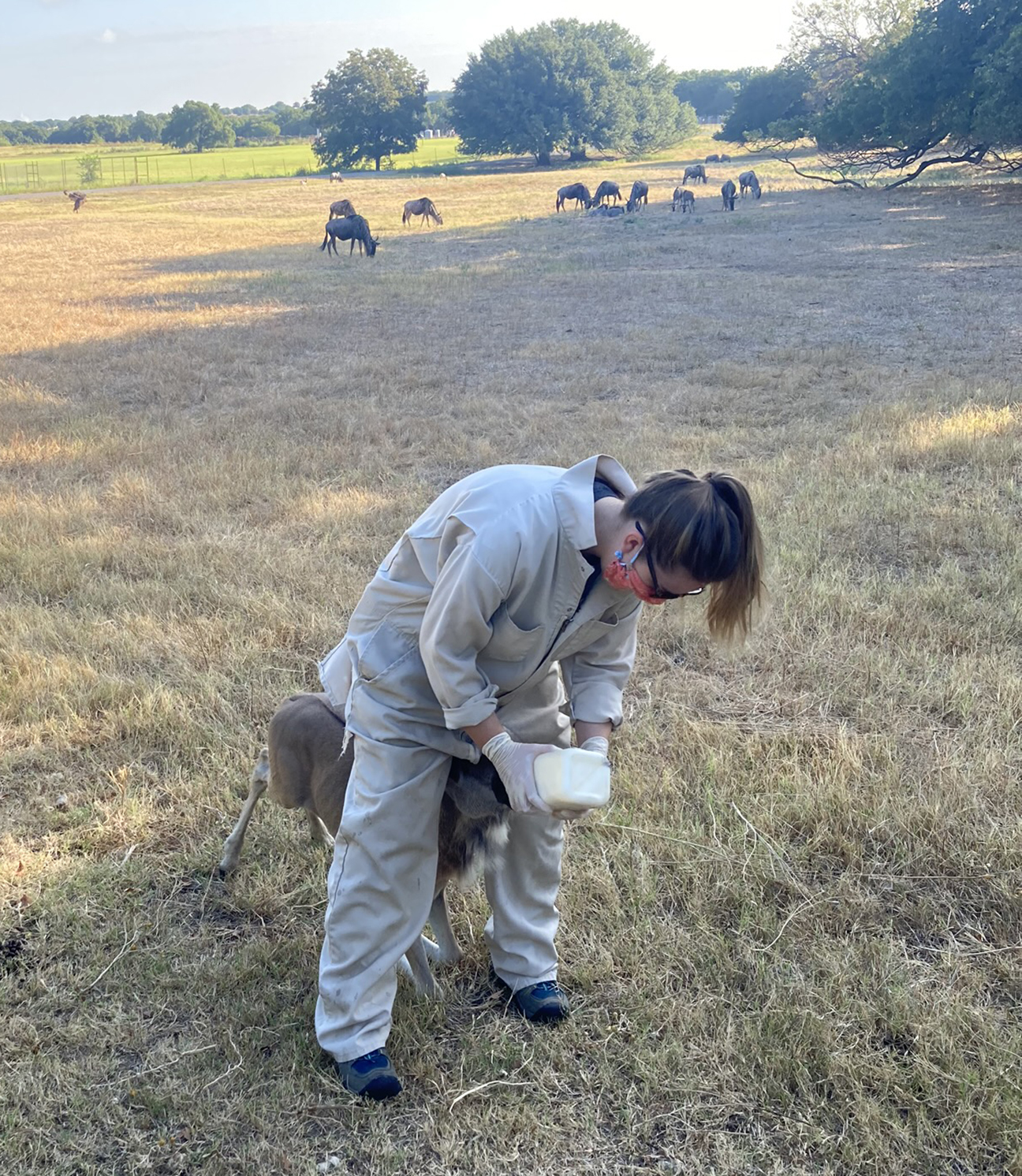 “Some institutions don’t even try to hand-raise them. Even when a facility does so successfully, it is oftentimes difficult to integrate those post-weaned animals back into the herd, which can be unaccepting of them.”

The calf in question was just two days old when her mother died.

“We had to immobilize the mother because she was having severe paralysis in her hind end as a result of damage to the obturator nerve and her muscles during the calf’s birth,” she said.

The calf was very nervous and did not want to be near the staff, so providing care for the animal was understandably a struggle for the first week.

“She quickly developed bloody diarrhea and wasn’t a great eater,” Haefele said. “We used some pain medications, some antidiarrheal meds, and some calming meds. After about 10 days, she started to turn around. Another week after that, she was taking the bottle consistently. In comparison, it might take us four days to get a difficult giraffe calf on the bottle.

“The previous hand-raised wildebeest calf never knew her mom, which made it easier to get her on a bottle. Even so, it took that past calf seven days before she realized what the rubber nipple was for.”

After this recent calf’s gastrointestinal issues cleared up, she recognized that the veterinary team was her food source. From there, she was gaining weight and eating consistently.

“We started calling this animal ‘Ethan,’ because our vet student at the time was Ethan Bloomer and he spent a lot of time with this calf,” Haefele said. “Sometimes, he’d just sit with her to help her get used to people taking care of her, but he also spent a lot of time trying to get her to take the bottle. In honor of all his hard work, the calf was named Ethan even though it’s a girl.”

The calf’s very brief time with its mother was not a total loss.

“Our first challenge was to determine whether the neonatal ruminant got any colostrum,” she said. “If the animal is born and doesn’t get that special milk from mom in the first 24 hours, it is set up for problems. That’s where they get all the important proteins and immunoglobulins used to fight off disease before their own immune system starts working.

“Actually with this girl, we were pretty confident she got colostrum before the mother’s death. Had she not, we might have been looking at a plasma transfer.”

With the calf doing well under veterinary care, it was time to take the next step.

“We didn’t want integration into the herd to become a problem, so we couldn’t keep the calf separated for too long,” Haefele said. “This is something we think about anytime we have a hand-raised animal. When we hand-raised a giraffe calf years ago, as soon as it was stable and eating well, we moved it out to the herd. Then, we fed it via a bottle out the window of the vet van.

“We wondered if that approach would work with this calf. Nobody who we knew had really tried that before with wildebeest.”

When the calf reached six weeks of age, the animal health and animal care teams decided to move forward with integration.

“We packed her up in the van, found the herd, and let her out,” she said. “She was confused at first, obviously. But, she approached the herd faster than we expected and followed them around, while they saw her as another baby.

“There was one cow that was mildly aggressive toward her, but also a young cow that took interest in her right away. We wondered if she would come back to us to get a bottle, because she wasn’t ready to be weaned.”

That afternoon, the team returned with a bottle to see if the calf would come over to the van.

“She looked at us as if to say, ‘I don’t think so,’” Haefele said. “The next morning, we drove the van near the herd, but not close enough to make them nervous. We’d consistently been wearing this tan set of coveralls when feeding her, plus we stayed consistent in how we called to her. With one of us wearing the coveralls, she hesitated slightly, but from that morning on she would come running over.

“It was adorable, because she’d see us, make baby wildebeest noises, raise her tail up, and head toward us enthusiastically. The one downside is that, until the day we weaned her, she was so excited that she didn’t automatically take the nipple in her mouth. There would be 1-3 minutes of desperate searching and trying to find it.

“Her first go-to spot was your crotch, so she’d come over and hit you really hard. If you guarded yourself, she’d hit you in the stomach. I really feel bad for those wildebeest moms getting brutalized by their hungry kids!”

For the first week, the calf would even chase the van as it drove by attending to other business.

“She did really well in getting two feedings per day,” Haefele said. “The amounts we offered her decreased as we dropped her to one feeding per day and eventually almost nothing by the time she was three months and six days old for her last bottle.”

“She’s been a rock star and stays with the herd,” she said. “She knows she’s a wildebeest, and we are super excited about how she ended up through this ordeal.”

Was there any other way?

“We had to do all of this for her to survive,” Haefele said. “Maybe we could’ve tried to put her with a surrogate mother, such as a goat with a big udder, but it’s a hand-rearing plan when the mother dies, typically without a lot of other options.”

There would normally have been more staff members involved in the feeding than just the veterinary team.

“Typically, when we hand-raise an animal, both animal care and animal health are involved with the feedings,” she said. “But, we restricted it to animal health this time with a higher level of biosecurity, because young wildebeest typically carry and can shed a virus that could be problematic for other antelope species. We didn’t want our hoofstock staff potentially picking up that virus and bringing it to other parts of the park. The chances aren’t too high that would happen, but we needed to be careful about it.

“Ethan had a salmonella infection in her gut early on, which caused the bloody diarrhea. That was a challenge, because salmonella is a zoonotic pathogen. We had to be particularly careful about that.

“Once that was resolved, we remained careful because of the wildebeest virus. It’s a herpes virus, so it would naturally shed more when an animal is stressed, even an adult wildebeest. Fortunately, we think the other species generally keep enough space away from the wildebeest in their pasture.”

When animals like cheetahs need to be hand-reared, sometimes their ability to breed successfully can be greatly reduced.

“It’s typically not a worry for female antelope; I think Ethan will be totally normal,” Haefele said. “However, we do worry about intact male antelope becoming dangerous after being hand-reared. If they don’t have a fear of humans, they could get up in your face and be dangerous to people.”

What does Ethan’s future hold at Fossil Rim?

“We hope she’ll be an ambassador for us,” Haefele said. “Because that herd is fairly skittish of us and she isn’t, maybe she’ll convince the others not to be so afraid. We’ll have to see. They did get a bit more used to us since we were approaching twice a day to feed her.

“Prior to Ethan, this herd was as skittish around us as any species. They are very herd-oriented and basically have one overall herd brain, which makes them flighty.”

When guests visit Fossil Rim and enter the Front Pasture, Haefele hopes they will take the time to observe an animal that may be awkwardly built but is one of the three fastest-running species at Fossil Rim along with cheetah and blackbuck.

“The wildebeest are one of my favorite species that we have here,” she said. “They are so beautiful, they make wonderful noises, and they really are a representation of a species that still exists in huge numbers in Africa, which will hopefully continue.

“Their migration across Kenya and Tanzania is iconic among African wildlife. I think it’s cool that you can come here and see a little bit of that on a smaller scale.”

To learn more about wildebeest, check out this August blog with Ben Jernigan from our hoofstock department: https://tinyurl.com/y5gdkkqc.