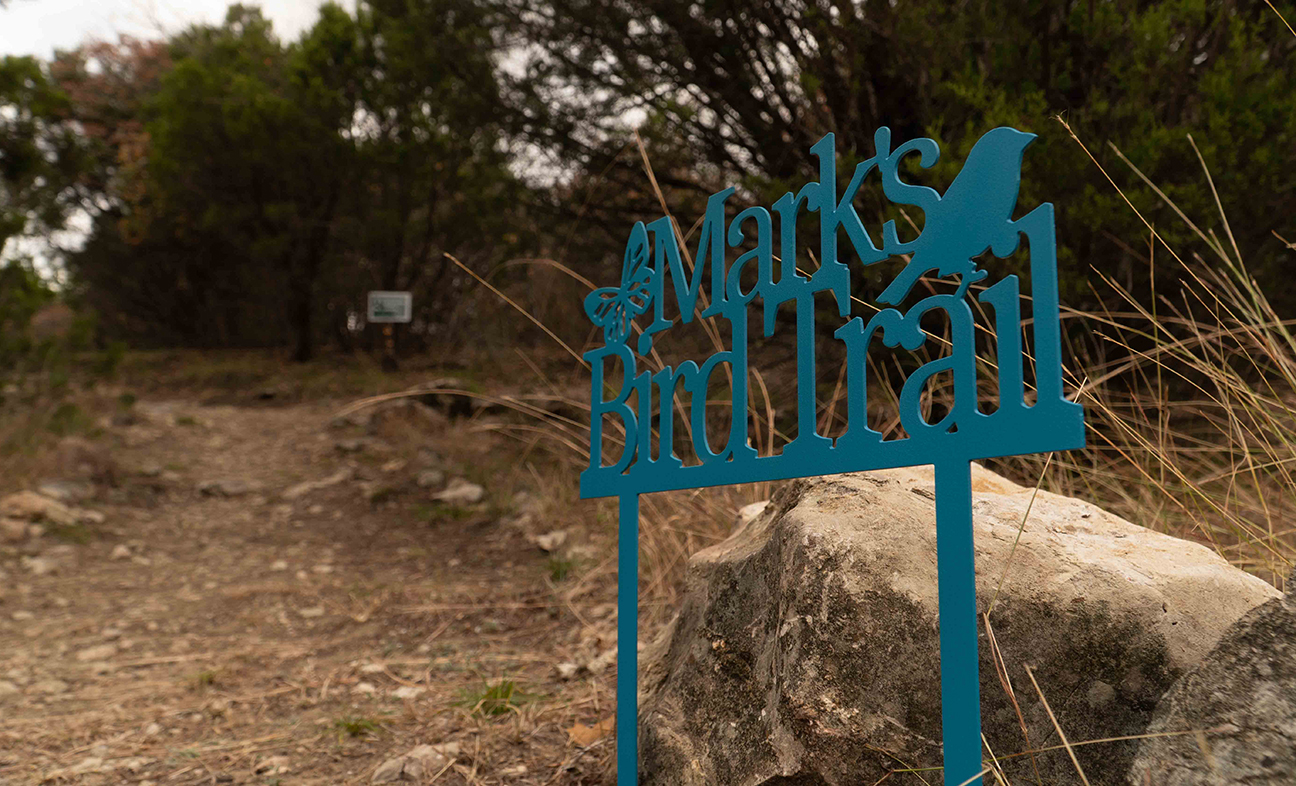 Fossil Rim has completed the first phase of planned renovations and expansions of its Overlook trail system. The Overlook is home to not only the Overlook Cafe, Nature Store, and Children’s Animal Center, but also has two trails to explore! The half-mile Wolf Trail and quarter-mile Bird Trail are great opportunities for guests to stretch their legs halfway through their Fossil Rim adventure.

On Saturday, November 21, the Fossil Rim Education Department officially dedicated the newly-renovated Bird Trail in honor of coworker Mark Phillips, who passed away in June of this year.

“Mark and I began this project, revamping our trail system, earlier this year,” said Visitor Programs Supervisor Will Baker. “This is something that he and I planned to be working on this fall, so to finish this leg and have it dedicated to Mark is really special. So many parts of this trail embody who Mark was as a person.”

The Bird Trail (formerly known as the Birding Trail) was an eighth-mile path that previously led from the back of the Children’s Animal Center to the Overlook parking lot entrance.

“The old iteration just kind of spat you into no-man’s land,” admitted Baker. “It was nice for education to use, since we knew where we were going, but guests got to the end and had to decide: maybe turn around or maybe walk along the road. It wasn’t very user friendly.”

As an educator and naturalist, Phillips was one of the most frequent users of the Bird Trail in its old form. Last fall, he and Baker found the Bird Trail had a preexisting route that could be used to make the trail into a loop. They set out to revamp the old leg along with the existing route.

“We were excited from day one!” recalled Baker. “We would walk through the woods on that old trail instead of on the road to get to the Overlook. What started as a preference for us became our next project. That was our next way to get people out and connected with nature.”

Phillips was as easygoing a person as you could find. The Bird Trail in its new form is similarly approachable. The trailhead is located just beyond the Children’s Animal Center path, considering from the corner you can see the sign for Mark’s Bird Trail.

Once on the trail, any way is the right way to go: it’s a loop! While the trail path does have a small incline to start and a few protruding rocks, the trail is more akin to a walking trail than a strenuous hike.

The Bird Trail loop is on a hill that sits atop the Overlook plateau, making it one of the highest points on Fossil Rim property. Interestingly enough, even at an altitude estimated between 1,100-1,200 feet, one can still find the sea-life fossils that gave Fossil Rim its name.

One of Phillip’s favorite pastimes was discovering nature, through birding or hiking. Animal evidence can be found on the trail like dens, nests, and tracks of all types. In his time working on the trail, Baker sighted deer, armadillo, and many different birds.

“As soon as we started our work, we had signs of animal activity everywhere,” remarked Baker. “The deer may be our most frequent trail travelers right now.”

If you don’t spot a critter, the Bird Trail does offer some close-up views on some sedentary Texas natives. The hilltop trail is heavily bordered by Ashe Juniper trees, which is the evergreen seen all over the park in large numbers, but also houses oak trees and prickly pear cacti. These native species may not have the exotic spots of a cheetah or the flair of yearly antlers, but they are a critical part of the Texas ecosystem.

While traveling along the trail, you can find Forget-Me-Not Nook. This area is designed to celebrate Phillips as an educator and naturalist at Fossil Rim by providing guests an opportunity to acquire knowledge or be at peace with nature. The seating area incorporates benches, a little library stocked with nature books, and a beautiful natural setting, all of which Baker looks forward to sharing with the public.

“With the sunlight coming down through the canopy and the breeze that comes across the top of the hill, this is the perfect place to take a moment in nature,” he said. “The nook’s name, Forget-Me-Not, comes from a few threads. First and foremost, we will always have Mark in our hearts. Secondly, it speaks to Mark’s role as a naturalist, since he was usually the one to point out our annual wildflower blooms. And then there was the fact that Mark himself was quite forgetful, almost comically so.”

As part of the dedication ceremony, his family and friends were asked to place painted Forget-Me-Not stones along the trail route.

Phillips’ penchant for sharing and educating lives on through the Bird Trail. If you can’t figure out what you’re looking at, the trail is furnished with nature identification guides found at the trailhead.

Simply grab one, explore the trail, and return the ID guide before leaving the trail. The nature books found at the Forget-Me-Not Nook’s little library are chock-full of info, too!

As the newly looping trail returns you toward the Overlook, trail users will pass through the amphitheater. This structure has provided a sheltered setting for education programs since the early 1990s and is the perfect spot to unpack a lunch and enjoy views of our Game Preserve pasture.

As all good educators tend to be, Phillips was endlessly resourceful. As tribute to him, the education department was proud to reuse and repurpose many elements of the Bird Trail. The space for the Nook previously housed a bird blind, materials from which will go towards the animal care department’s fencing needs.

The little library itself is a refurbished newspaper stand, now ready for families of all ages to read the good news on conservation. The beautifully hand-painted signage previously found at the bird blind has been reincorporated as part of the trail welcome sign and as part of signage elsewhere at education facilities. Even the trail itself has gone through stages from human use, to deer only, and now onto use and reuse by visiting schools, groups, and families alike!

As Baker explained, this is only the start in the revitalization of Fossil Rim’s trail system.

“This is the first step: get the trail accessible, make it inviting,” he said. “We plan to do the same next with Wolf Trail. We intend to have activities and elements incorporated along both trails that help folks better connect with the nature that they’re walking through. This is just the beginning.” 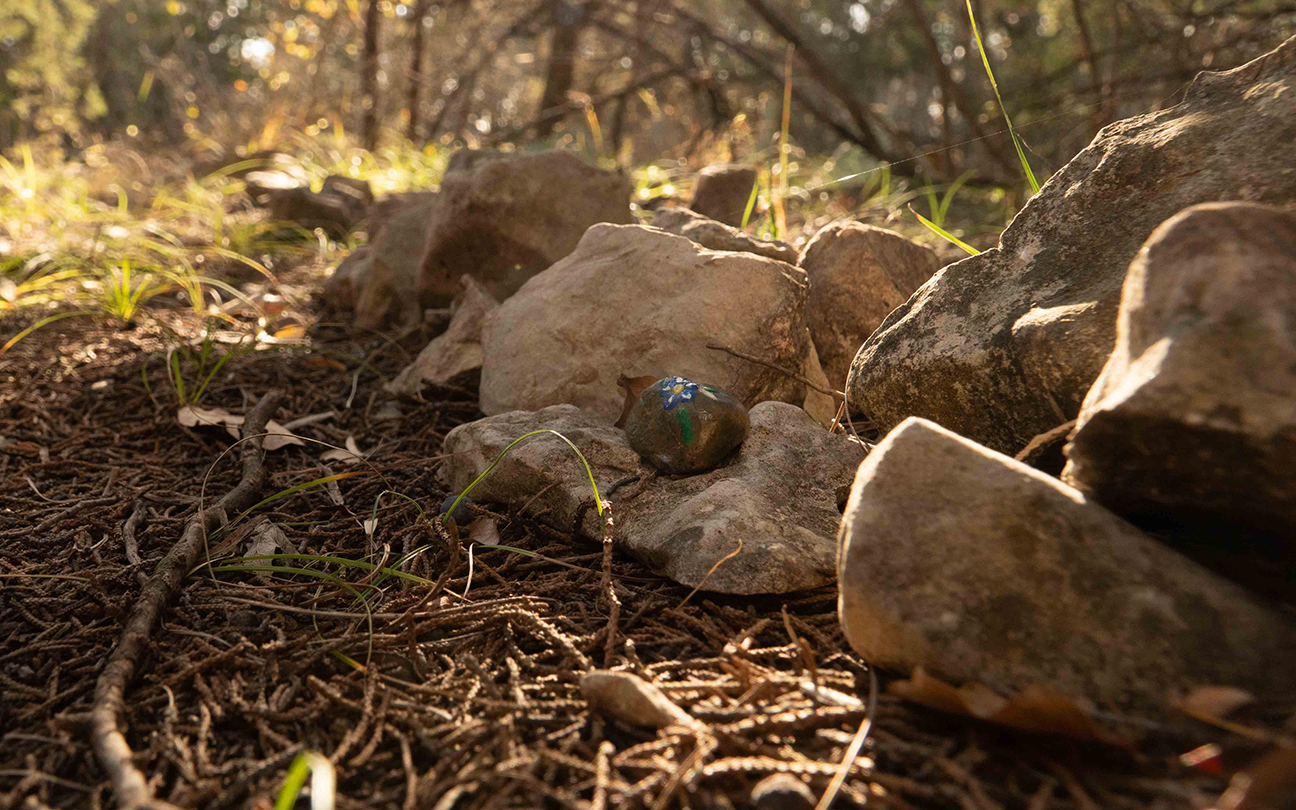 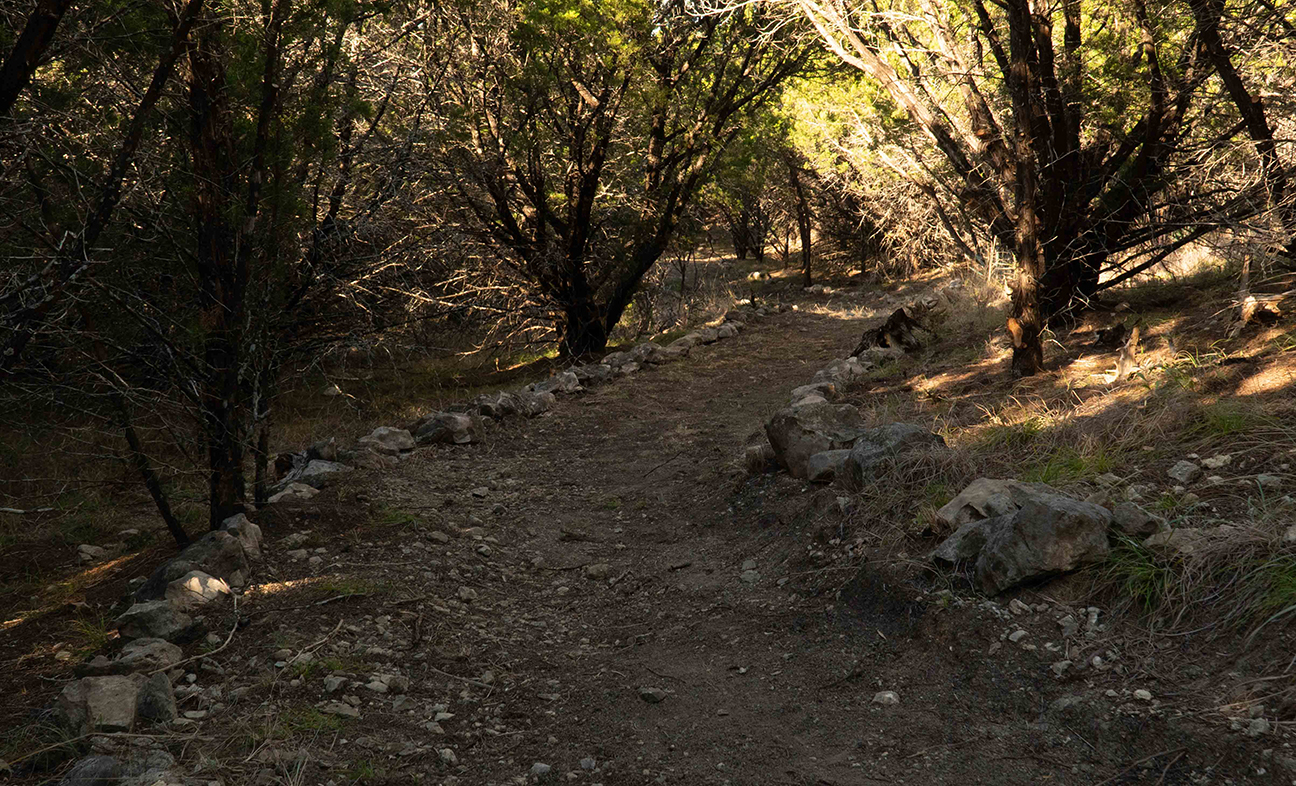 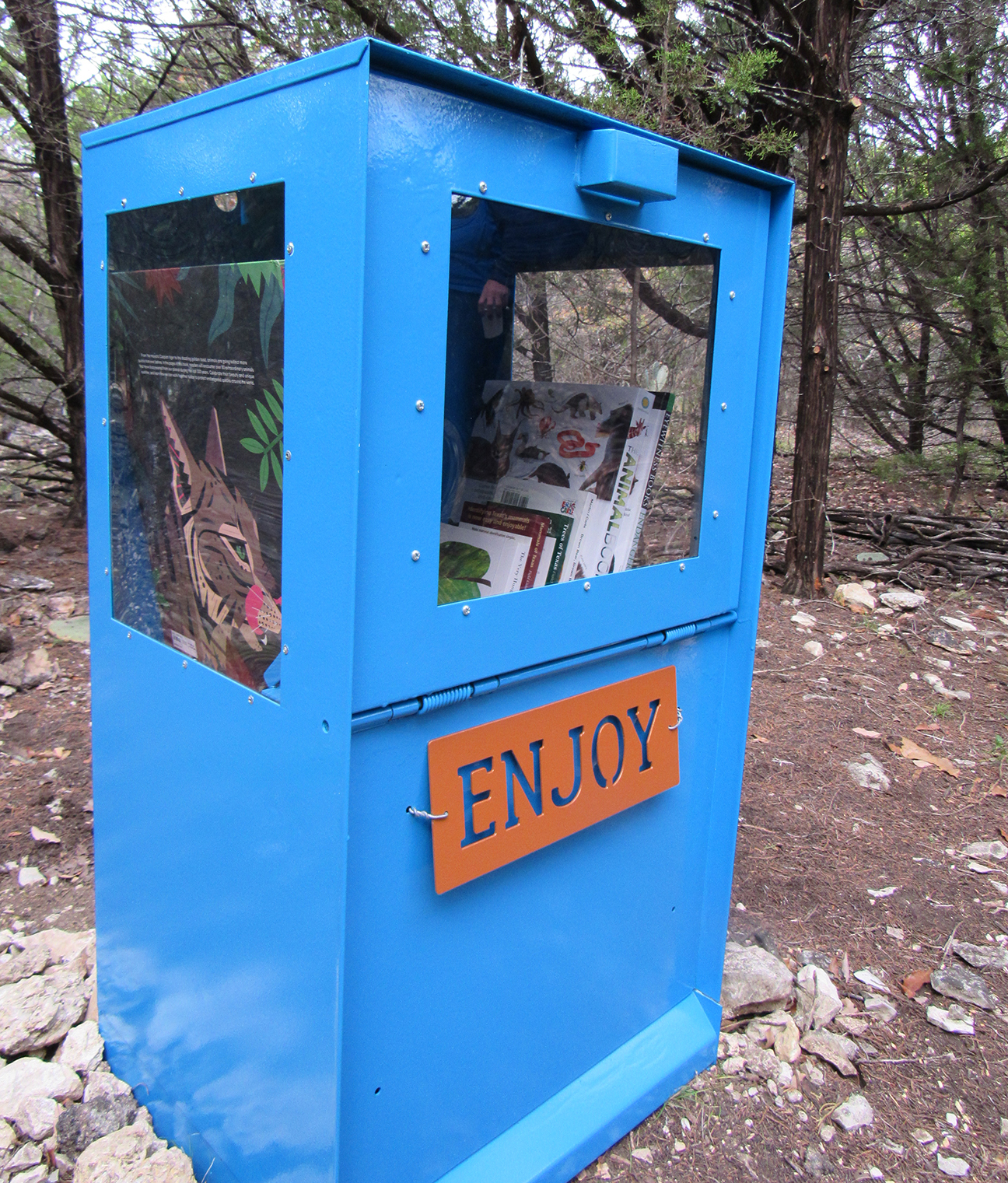 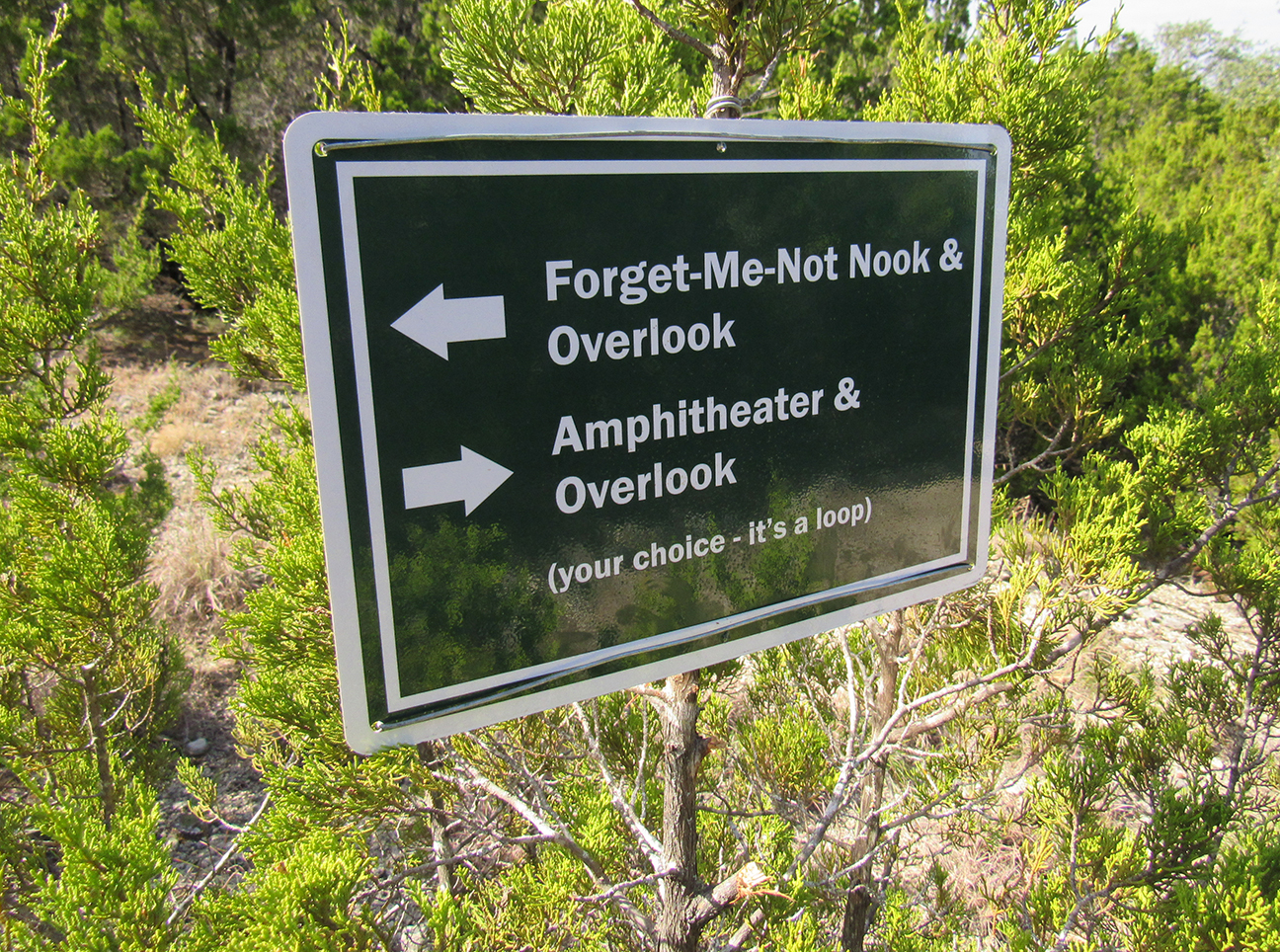 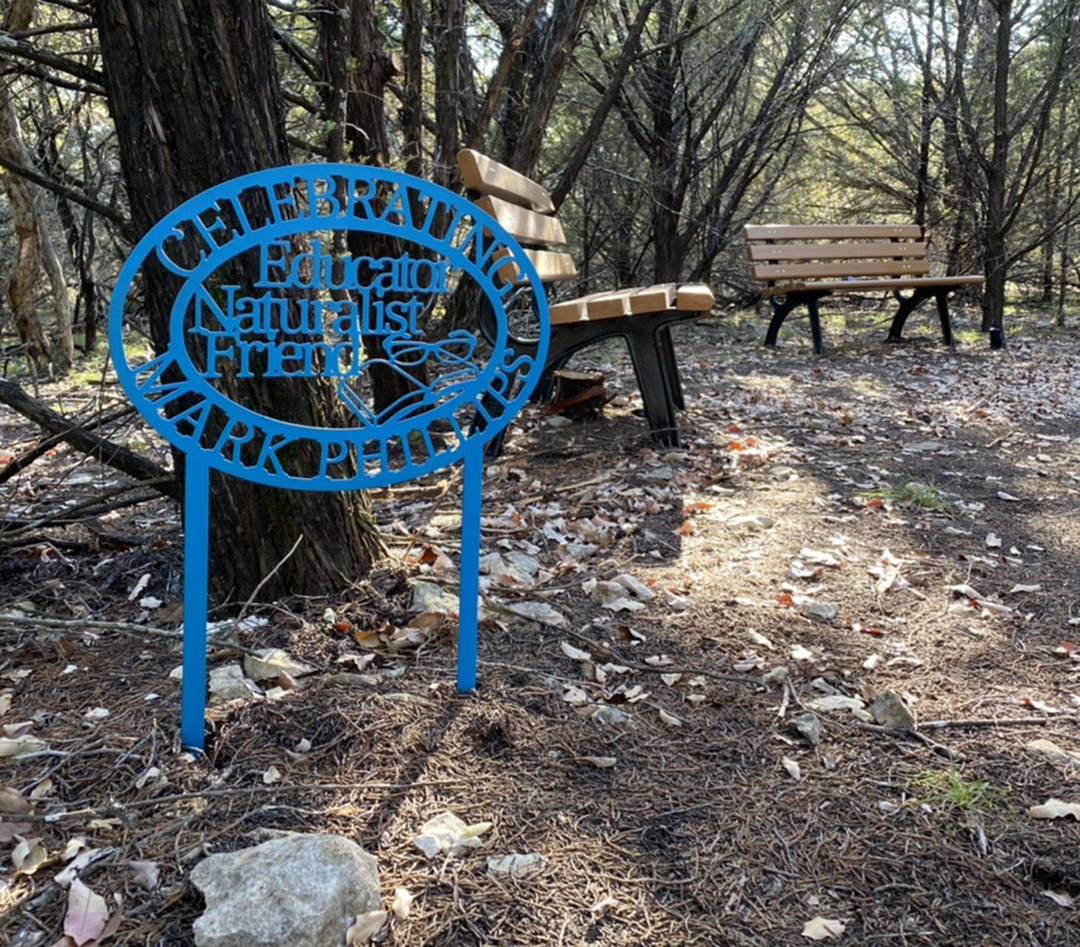 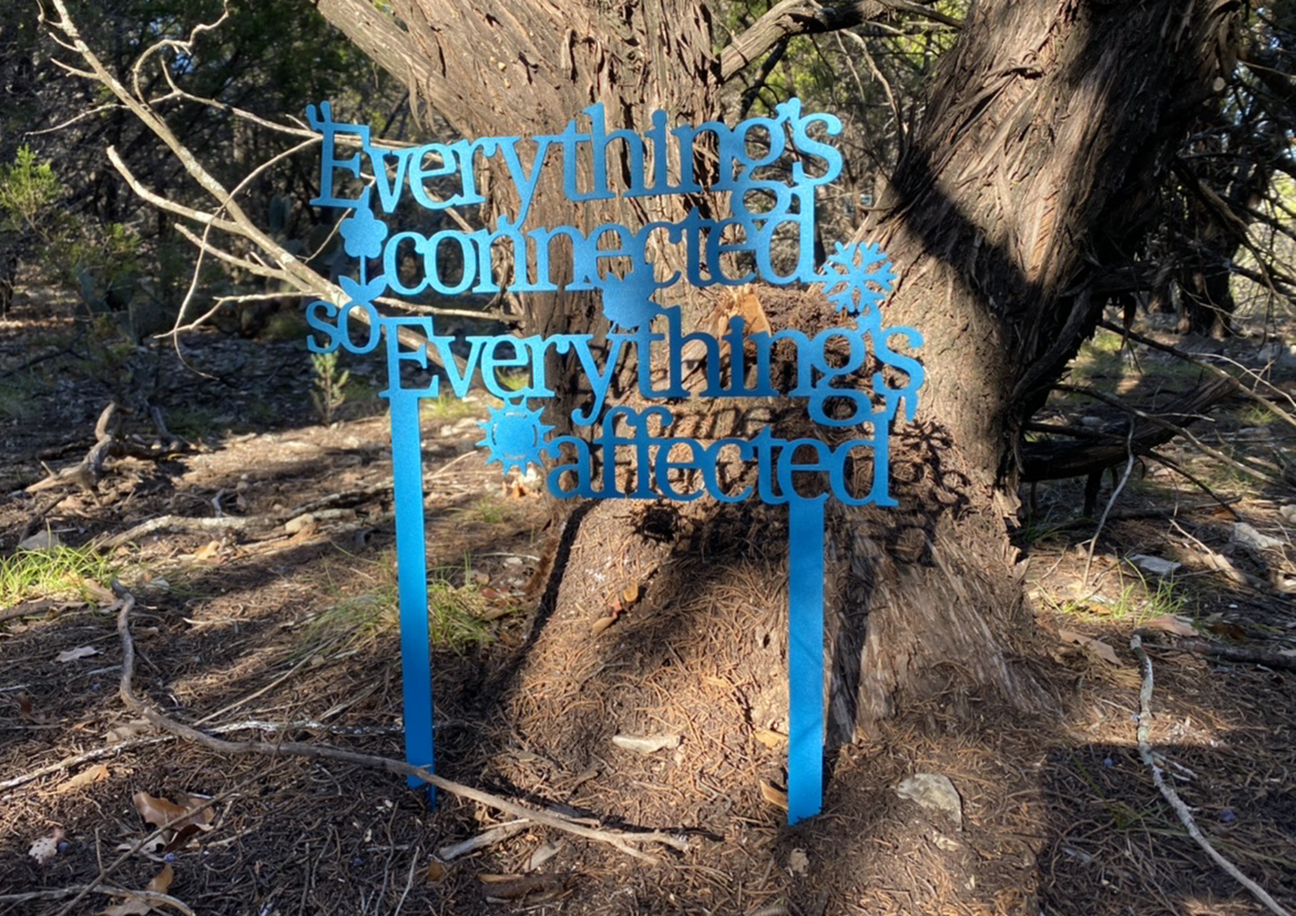 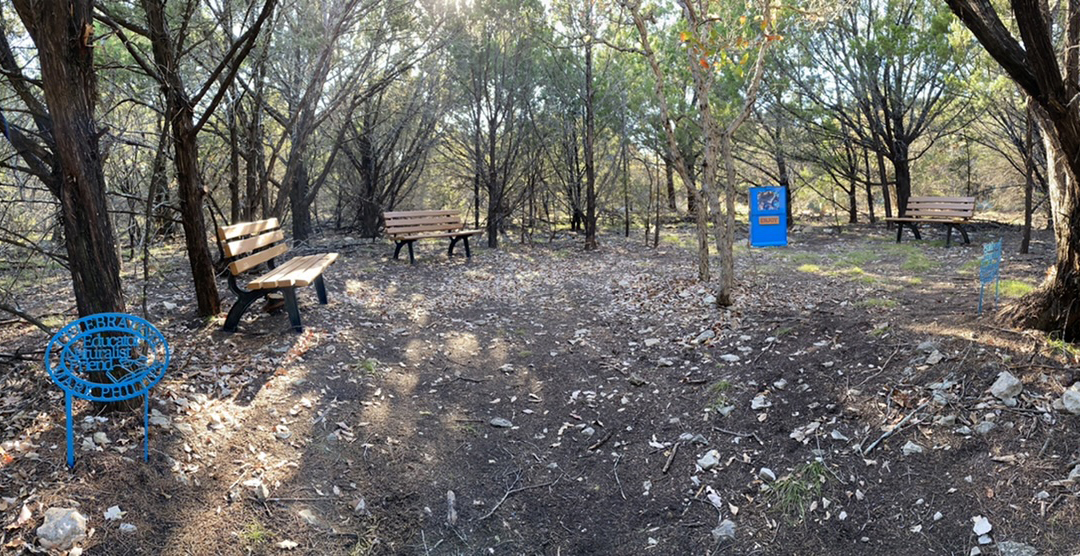 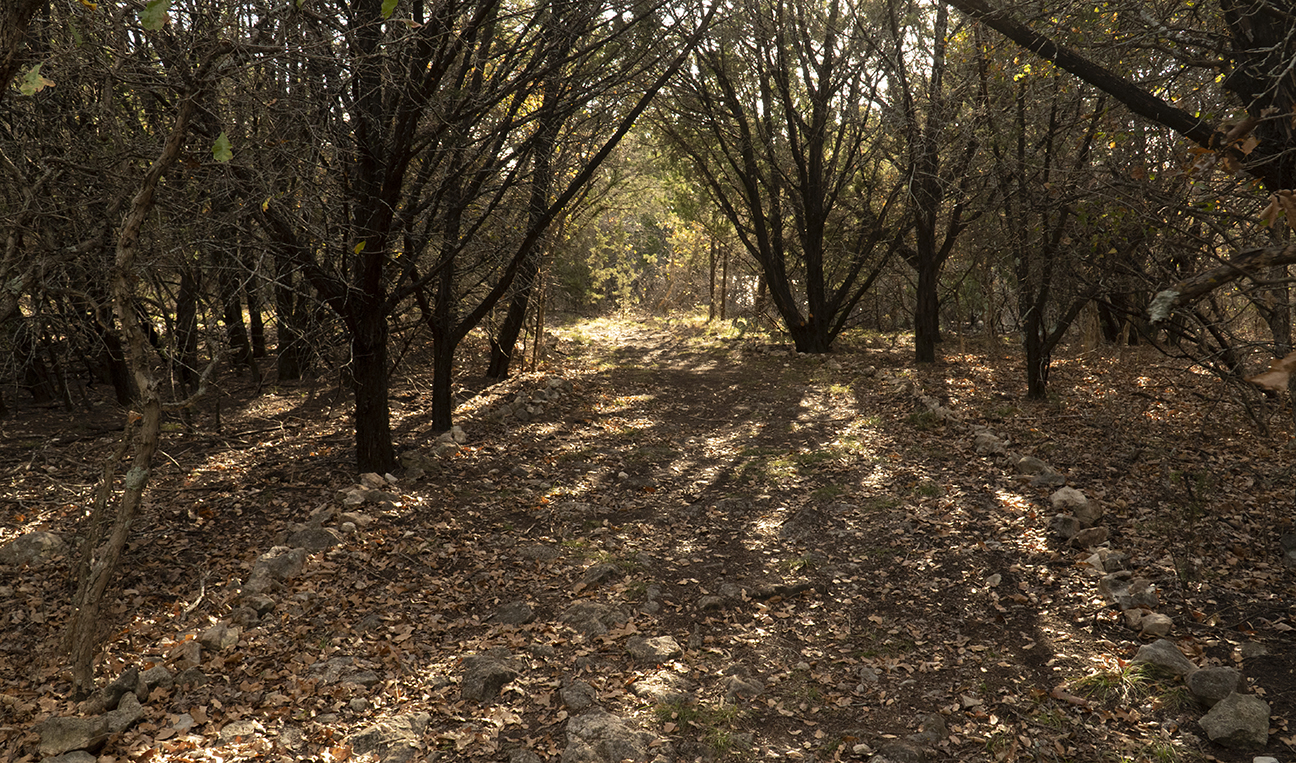 8 thoughts on “Walking Trail Renovated In Honor Of Late Educator”