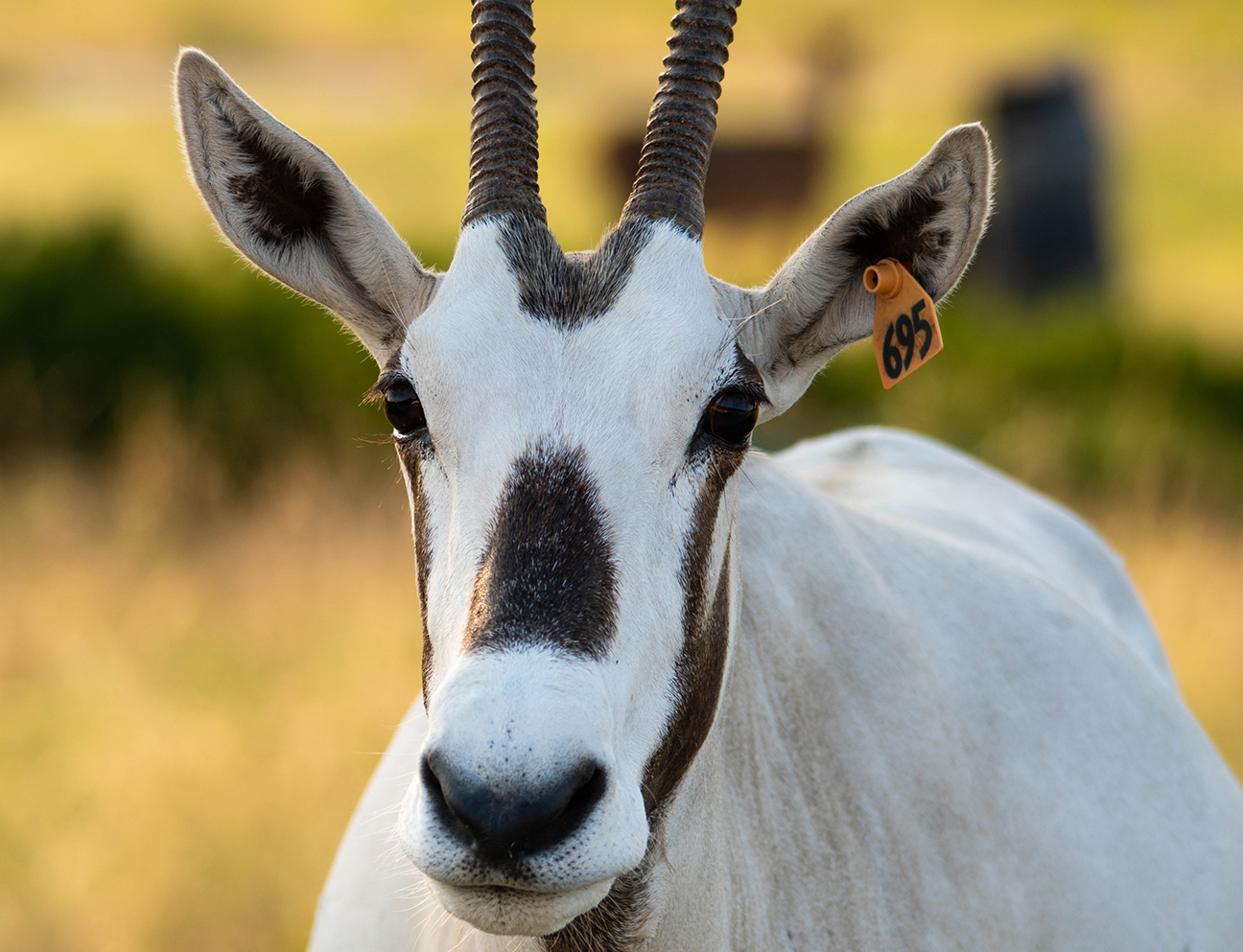 Fossil Rim Wildlife Center is mainly comprised of African and North American species, but there are a number of other animals from across the world that boost the facility’s diversity.

A perfect example is the Arabian oryx, which is Fossil Rim’s lone representative from the Arabian Peninsula. Guests may be more familiar with the wildlife center’s African oryx: scimitar-horned oryx and gemsbok.

“I like that a person can come to Fossil Rim and see a bit of the whole world, from the standpoint of all the different places our animals are native to,” said Molly Shea, senior animal care specialist – hoofstock. “We are known for our African animals, but species like the Arabian oryx help widen our scope. I think the scimitar-horned oryx get more attention because there is an active conservation program for them, while the Arabian oryx have undergone a successful captive breeding program. Naturally, scimitar are in the news more often, but Arabians deserve attention, too.”

Arabian oryx became classified as “Extinct In The Wild” in 1972 and were first reintroduced in Oman with 10 animals in 1982, followed by reintroductions in Saudi Arabia, Israel, United Arab Emirates (UAE), and Jordan. In 1986, they were upgraded to “Endangered.”

While there are approximately 1,220 wild oryx across the Arabian Peninsula, the population is considered stable, hence the International Union for the Conservation of Nature (IUCN) status designation of “Vulnerable” as of 2020. In fact, it is close to being upgraded to “Near Threatened.”

In 2011, the IUCN reclassified the Arabian oryx to “Vulnerable” from Endangered, marking the first time an animal species that was once Extinct In The Wild improved in status by three-full categories out of six on its Red List of Threatened Species. However, this species remains under threat from poaching, overgrazing, and droughts.

“Seeing how humans helped the Arabian oryx population recover – that’s the goal for us in this field,” Shea said. “It’s why conservation and breeding programs exist. With these other recovery species (like scimitar-horned oryx), we want the end result to be similar to what happened with the Arabian oryx – a stable and possibly increasing population in the wild. A lot of the work was done in Saudi Arabia, as far as breeding the oryx.

“Phoenix Zoo was a major contributor to help the Arabian oryx recovery. Arabian oryx live in protected lands in their native range, but just the fact they aren’t in need of more reintroductions is impressive considering where their population used to be.”

As one might expect of a desert species, Arabian oryx are very hardy and have adapted well to their pasture in Central Texas.

“Obviously the desert where they originated can be very harsh for animals living there, and so Arabian oryx can get by on a lower-nutrient diet than many animals,” she said. “They can handle the intense heat, and they are white to help deflect the sun rays. Their hooves are adapted to navigate softer sands, although not quite as wide as addax hooves.

“Interestingly, Arabian oryx are able to detect where rainfall is going to be and will travel long distances to pursue it. This species does not have any trouble dealing with Texas winters.”

“Arabians are grazers primarily, so you don’t see much browsing from them,” she said. “They’ll eat poor-quality hay that we’d actually put down to encourage grass growth. Occasionally, I’ve seen them chew on rocks. I would just say they are some of our least picky eaters.

“If they are in a holding pen, it’s not going to be a case of you needing to encourage them to eat. I believe that instinctually they are driven to eat anything that might have nutrients, because in their native range they can’t be sure when the next meal will come.”

Since there are several white animal species at Fossil Rim, how can you be sure you are looking at an Arabian oryx if you do not happen to have a species ID guide handy? For one, they live in the Game Preserve – the fourth pasture you enter.

“Sometimes I can’t find the Arabian herd, so I’ll go up to the Overlook and look down for the stark-white animals,” she said. “Nothing is quite as brightly white as they are, and the contrast with the black facial marking enhances that. Their horns are almost perfectly straight and come off of their heads to form a V-shape. In terms of very straight horns, they are probably our best example.”

Why do the Arabian oryx have to live in a different pasture than the scimitar-horned oryx and gemsbok, which have to live separate from each other, as well?

“Most oryx can hybridize with each other, so we have them separated by pasture – Arabians in Game Preserve, gemsbok in Main Pasture, and scimitar in Front Pasture,” Shea said. “As a conservation breeding facility, hybridized animals are never a goal here and actually something we try to avoid at all costs through management tactics.”

For the same reason, Nile lechwe are kept in a separate pasture from waterbuck. On that note, lechwe are the only other antelope species in the Game Preserve with the Arabian oryx. The two other large pastures at Fossil Rim have much more antelope diversity.

“The Arabians were definitely put into Game Preserve because they would be the only oryx species in here,” Shea said. “They are one of the species that use almost all of that (266-acre) pasture; I have seen them on just about every acre of it.”

Besides enjoying roaming their pasture, what are some other insights on Arabian oryx behavior?

“They are much smaller than scimitar, but have a similar attitude,” Shea said. “Despite their size, the Arabians definitely have a large presence; not many animals mess with them. In fact, that pasture overall has very little conflict among species.

“They function as a herd and have a hierarchy, plus they are very protective of their calves. If a calf is crying, they will all run over to it – not just the mother.”

The giraffe “Nyla” has a history with the Arabian oryx from her younger days. 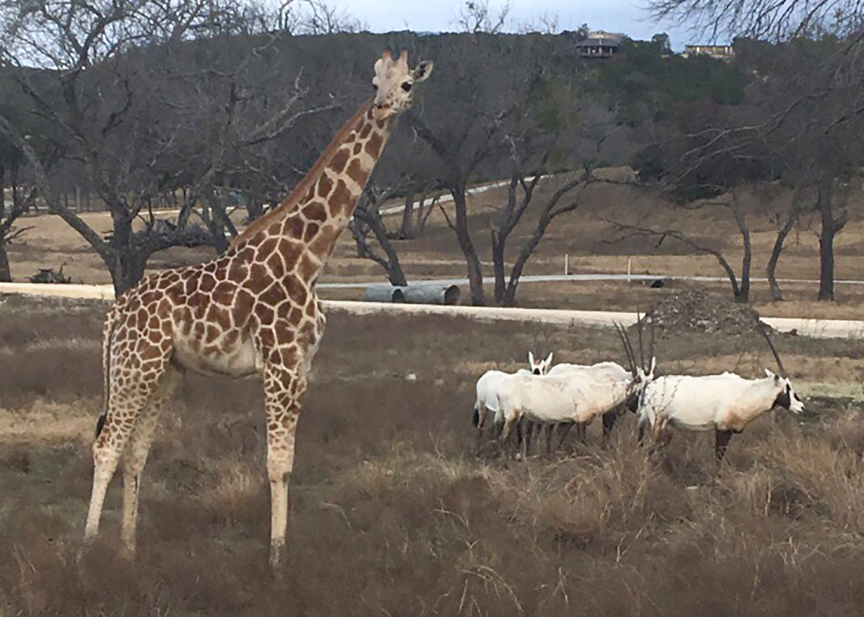 “Nyla was a weird case,” Shea said. “I think she just didn’t have any other animals her size as a young giraffe at the time. Whether it was for entertainment or some sort of companionship, she was drawn to them for a while.

“They didn’t care for her, but they tolerated her because she was larger. Nyla has mostly grown out of that, but as a calf when I couldn’t find her, I’d go look for the Arabian herd.”

Although Arabian oryx do not require a lot of attention from the veterinary team, Shea did reference neonate exams for the species as an “adventure” more often than not.

“Their neonate exams are always more challenging than most species,” she said. “They don’t have their calves in a place we can drive within a few steps of. We have to carry a shield up the hill and hope we find mom and calf.

“The entire exam is typically done with someone holding the calf for the vet while others are shielding them from the mother. As small as Arabian oryx are, they make me more nervous than our larger antelope because they are fearless.”

Shea is hopeful that visitors will take some time to observe the Arabian oryx on their future Fossil Rim trips.

“A lot of animals in the Game Preserve get overshadowed by the giraffes because they are so gregarious and a lot of people come mainly for them, but you can’t forget about the other species that are also battling to overcome huge challenges in the wild,” she said. “The Arabian oryx are an example of a successful reintroduction program, which is something many of these other species may need or currently require and that’s to be appreciated I think.”