Whether they are greeting guests in the Main Pasture or enjoying a hay buffet, addax antelope are a significant species at Fossil Rim and have been since the 1970s.

These critically endangered creatures comprise one of the largest herds at the wildlife center.

“At Fossil Rim, addax definitely do well,” said Ben Jernigan, animal care specialist – hoofstock. “I think it’s because they are so well-adapted to a drier, desert environment. While Fossil Rim isn’t a desert climate, for the majority of the year we tend to be on the drier, hotter side. I think the addax are set up well (in that regard), plus the pasture layout seems to suit them.

“The rainfall topic is a good time to mention how different antelope species can be. Our waterbuck and lechwe thrive in the wet, spring season. Meanwhile, the wetter conditions do not suit the addax as well. If it is too wet (long term), some of our desert antelope can begin to encounter hoof problems.”

More than 700 addax have been born at Fossil Rim.

“Addax are the second-largest antelope herd at Fossil Rim after blackbuck,” Jernigan said. “They do pretty well in terms of caring for their calves. As far as I’m concerned, they are a very productive antelope species here.”

Before we go any farther, what if this is the first time you’ve ever heard of this animal? How will you know for sure when you see one at Fossil Rim?

“I think the first thing you can do is look at what we describe as a toupee on their heads,” Jernigan said. “Then, they almost have what looks like a white X across their noses and on both sides of their eyes. They do share spiraling horns with our greater kudu, but addax horns have a tighter spiral and are ribbed throughout.

“Besides being in different pastures, kudu are much larger and grayish while addax are white, so no one should mix them up. An addax’s winter coat is thicker and they do get a bit darker, but looking for a white antelope with a toupee and spiraling horns is the right approach when visiting.”

Unfortunately for the species, the Fossil Rim population is not currently too far behind the worldwide wild population.

“During the last survey that I’m aware of, the wild addax population was believed to be just under 100 animals,” he said. “The reintroduction process for the species has really started to pick up, piggybacking off the success of the scimitar-horned oryx reintroduction led by Environment Agency – Abu Dhabi and Sahara Conservation Fund. In mid-January, 15 addax were released in Africa. The foundation was set by that scimitar release, observing how they acted and figuring out how we can help addax replicate the positive results for the released oryx.

“That reintroduction showed that this is an option for endangered antelope, and everyone involved in the addax release can refer to exactly what steps were taken with the scimitar and hopefully even improve on that blueprint. As an animal care specialist, it means a lot to see successes like that, because it is difficult to accomplish and requires a lot of cooperation from different organizations.

“It’s even harder when transport of animals to different continents is involved. But when you see a reintroduction succeed, you think about the possibilities of helping another species. It’s something you want to be a part of in any way possible.”

How did wild addax get into their critically endangered situation? Poaching drastically reduced numbers over time, plus prolonged droughts, regional wars, and, more recently, disturbances due to oil exploration.

“Another issue for wild addax is livestock in that region,” Jernigan said. “Pastoralists lead their animals to grazing and drinking opportunities, which is competition for the addax, plus ranching can reduce the available resources. Even for a hardy desert species, there is an extreme tipping point with drought.

“Even so, most problems for wild addax are a result of some form of human encroachment. Poaching them is easy with modern techniques, so the deck has been stacked against them.”

Along with scimitar-horned oryx and gemsbok, addax are at the top regarding Fossil Rim species that can thrive in a harsh desert environment.

“Their hooves are designed for stability in the sand,” Jernigan said. “They process water efficiently; their feces are very dry, and their urine is very concentrated. Their white coats reflect the sun’s heat, and their winter coats are a bit darker to soak up the sun’s rays. Plus, a lot of the moisture they need is gained through the plants they eat.”

Addax are able to tolerate a rise of body temperature by as much as 11 degrees Fahrenheit before resorting to nasal panting to cool down.

“All of it combined makes them well-suited for desert life,” he said.

This translates to the Fossil Rim visitor experience. Even on a 100-degree August afternoon, multiple addax sightings would still be probable.

“I definitely think that if you visit during extremely hot summer weather, one of the species you are still most likely to see is addax,” Jernigan said. “They are one of our largest herds and they are built to have more tolerance of heat. You might see the fallow deer out there, too, but if you watch long enough, you’ll notice that the fallow deer are going back and forth from the trees, retreating to the shade at times. The addax will stay out under that sun consistently.

“Just because the addax can handle a hot, summer afternoon visit, it does not mean it is a recommended time for you to visit. Most of our animals are more like a human in that they do not want to be out there under that (Texas) sun. I don’t blame any of the animals for heading off to find shade, because I know I would.”

When you see a Fossil Rim addax at close range, it will likely be doing what it does best – begging for feed pellets.

“The addax know how to get people to toss them feed,” Jernigan said. “They will stand in front of cars so that you throw feed off to the side to be able to pass. It’s a well-practiced behavior that they have down. A couple of other species will do that, too, but when you factor in how many addax there are here, they do a good job of getting the pellets they want.”

When you arrive at the pasture where addax live – the third pasture, Jernigan is hopeful you will help keep these antelope safe.

Especially on busy days, Jernigan said that cattle guard area is the most likely place to see the addax.

“Also, the (paved) loop will usually be pretty loaded with addax on the first half,” he said. “They may also be in the pasture beside the vet clinic sometimes. As we’ve talked about, addax are not one of the species you are going to have difficulty spotting.”

Besides pellets, Fossil Rim addax also eat round bales of coastal hay, capitalize on grazing opportunities, and perhaps occasionally do some light browsing, according to Jernigan.

“In that pasture, I definitely think addax and sable, followed by gemsbok, are the most consistently interested in eating the hay we provide,” he said.

Jernigan does not only see addax regularly, he hears them, too.

“Addax are definitely one of our more vocal species,” he said. “They will grunt or moan at you – usually food related but maybe just ‘What are you doing?’”

It is usually food that compels them to interact with other species.

“Addax are third in the hierarchy at feeding time in that pasture after sable and gemsbok, plus you’ll see them push the fallow deer off at times,” Jernigan said. “Overall, they get along with other species. The clear majority of interaction between species is during feeding time. After that, each group goes into its own zone.

“The zones are pretty consistent, although you will see some changes during calving season. The sable and gemsbok are consistent about where they like to hang out, and then the addax will fill in where they please elsewhere in the pasture.”

As with nearly all Fossil Rim antelope species, being able to examine newborn calves is crucial.

“Neonate exams are serious business,” Jernigan said. “Similar to an Arabian oryx calf exam, you usually can’t drive right up to the calf. Normally, you need two people with a shield to keep the mother at bay while a third person secures the calf and gets it back to the truck.

“The mother can be aggressive and you know going in the danger involved with a neonate exam, which is why we have a set procedure. It is very important for the vets to be able to examine a new calf.” 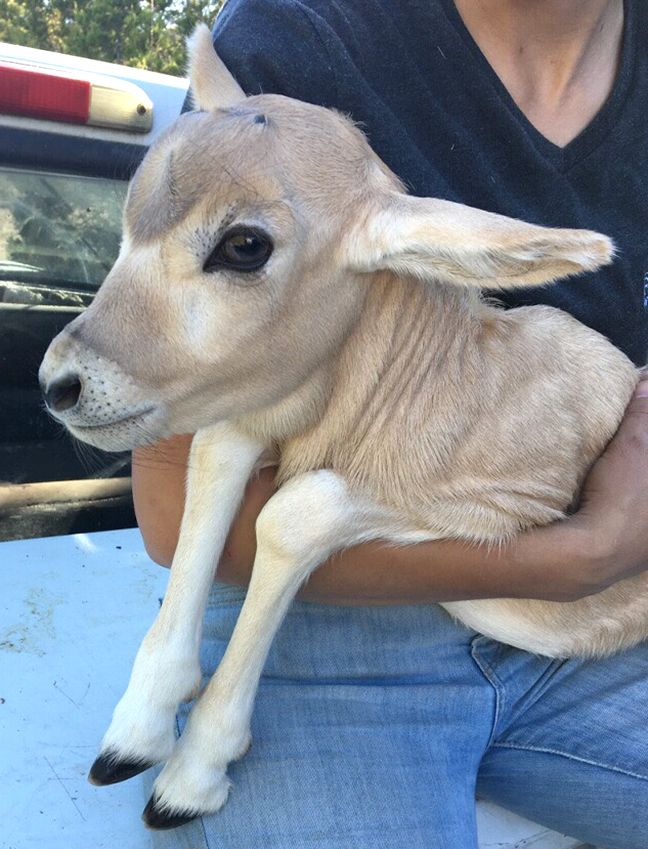 Whether it is how large the herd is, how many addax have been born at Fossil Rim, or how prominently the species plays a part in the experience of guests, addax are a key part of Fossil Rim Wildlife Center.

“Addax have been a stable, thriving herd at Fossil Rim for a long time,” he said. “We do our best to take care of them and they do well on this land. It also gives us a chance to do valuable research with them. Addax are a staple in Fossil Rim’s history and its future.

“Of course, giraffes and rhinos are some of our flagship species, but the addax and other antelope are just as important. Once you can identify them without an ID guide, you’ll see the significant presence they have here.”

Addax are one of several endangered species Jernigan looks after, and he appreciates the opportunity to do so.

“As far as taking care of endangered animals, every animal counts,” Jernigan said. “I wake up and do my small part for each species every day, but it’s part of a bigger picture. It’s great to be doing it for animals that really need the help and that’s my motivation every morning.

“I’m excited about the first addax release as I mentioned and especially the thought of many more to come. Once that (wild) group seems like they are thriving, the people leading the release efforts will try to build on that success.”

1 thought on “Addax Found In Abundance At Fossil Rim”