The Buffer Pasture offers a lot of interesting animals per acre, and the presence of greater kudu is a key part of its appeal.

The 20-acre pasture is the second one you enter, but you can start looking for kudu even before you reach the cattle guard. 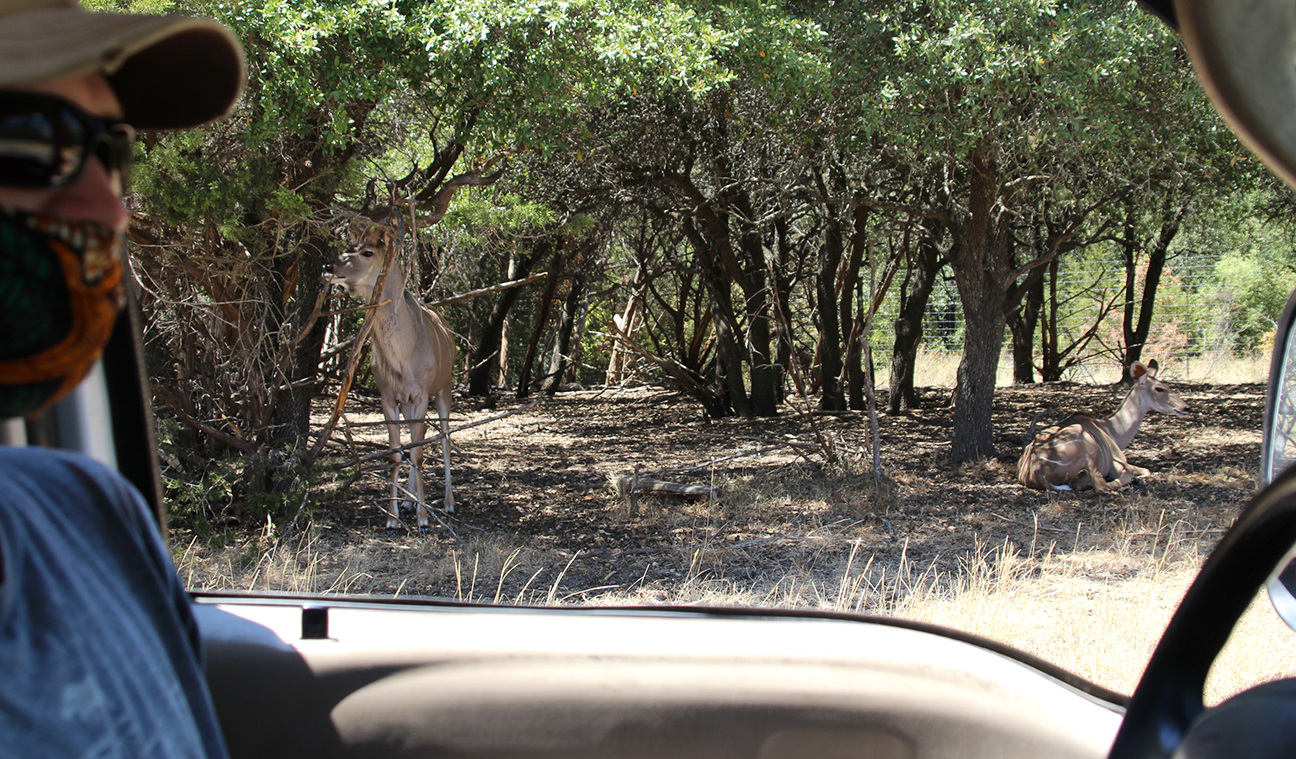 “Some of the female kudu have had their calves in the woods beside the bongo, but generally they will choose to give birth on the downhill section of the pasture by the (pond) along the Front Pasture fence line,” said Ben Jernigan, animal care specialist – hoofstock. “When you go through the first pasture, keep a lookout to your right and you will be able to see the Buffer Pasture well before you drive into it.”

For a species that would prefer to stay concealed, Jernigan talked more about kudu location in the pasture.

“The relocation of the paved route a few years ago relieved some of the pressure the kudu may have felt and created more of a buffer between the woods and guests,” Jernigan said. “Feeling concealed makes them more comfortable. With that being said, I think the kudu will come out into the open a little more than what you can expect from the bongo. Especially in the late afternoon and early evening, the kudu are likely to be wandering between the two wooded areas.

“Like other species here, generally the morning is still the best time to see them. None of the antelope usually go to the opposite end of this pasture during the day, but they wander over there at night. There is a shed immediately off to the right as you drive into the Buffer Pasture, and it’s a good idea to look and see if any of the kudu are hanging out near or inside it.”

As a forest antelope, it is genetically ingrained in kudu to not be inclined to roam across open pasture all day long.

“They typically like to stay in the tree line because that is the instinct of their species, and they get most of their nutrition from browsing,” Jernigan said. “Other antelope species might go in (among the trees) for a few minutes to cool down, but the kudu like to stay in there as much as they can. In the late afternoons when the temperature starts to drop, they’ll usually creep out into open pasture.

“If they were in one of our bigger pastures, it would be even more difficult to see them. I don’t think they would be getting into conflicts with the other antelope; they would rather avoid that.”

It is interesting that kudu have a shy nature, since the males in particular look more imposing than most Fossil Rim antelope.

“Their general disposition is less aggressive than you would probably assume without knowing better,” he said. “They aren’t as pushy as the other antelope. I think their horns are for display and only used when the male kudu feels like he has to.”

In fact, not only do the male kudu not try to capitalize on their large, eye-catching horns, the pasture they live in is known for its general politeness among species.

“I wouldn’t describe the kudu and bongo interactions as intermingling, but they generally get along well,” Jernigan said. “The dama (gazelle) coexist well with the other species and sometimes lay with the bongo in the wooded area. The only time you ever see an animal get pushed off is around the feed troughs, but that is infrequent.”

A tall antelope with the aforementioned majestic horns, when kudu are seen at Fossil Rim it is often a memorable experience.

“The kudu are the tallest antelope here, especially when the horns are considered,” Jernigan said. “In terms of having a large frame, maybe only the roan are ahead of them among Fossil Rim antelope. Their horns are large with the noticeable twists; they are awesome.

“One of the great things about being an animal care specialist is working around kudu on foot, and you get a real sense of their impressive size. When we talk Buffer Pasture, I always want to suggest bringing binoculars, even though it is a good idea in general to have them when visiting here.”

In addition to horns differentiating them from females, males also have long beards. Males are significantly bigger and females appear leaner.

Greater kudu have some unusual behaviors. They engage in social licking, which is rare in antelope. Mothers summon their calves with a strange smacking sound, nurse them, and hide them again until they are strong enough to join the herd.

Jernigan has sometimes heard what is known as a “gruff bark.” This loud, sharp alarm bark is made by an adult when it senses danger.

“Our older female is a little more skittish and flighty than the rest of the herd,” Jernigan said. “If I’m out there too close, she’ll definitely let a bark out. Or if I’m in their spot in the woods and she doesn’t like me out there, she’ll bark. It’s pretty loud – right up there with the loud chirps you hear from the roan calves.”

There is not much reason to move fast within the safe confines of Fossil Rim, but kudu are athletic and possess considerable leaping ability.

“If we have to push them out of the woods to check the fence line, or maybe they just get spooked, they do have fluid, long strides,” Jernigan said. “Even on their trot to the feed troughs in the morning, they have the look of an athletic animal.”

As a woodland antelope, kudu certainly need to drink water more often than desert antelope like addax, but they also are not nearly as water dependent as some Fossil Rim antelope like the Nile lechwe.

“I see the kudu and bongo make a trip to the water trough usually once a day in the afternoon,” Jernigan said. “They may have done it more on these hot summer days. The bongo will usually go as a group, but the kudu are more likely to go individually or in a small group.

“Wild kudu will stay in the forest, where the vegetation probably has more moisture in it.  That would reduce their need to make trips to a watering hole.”

While they could still spar on occasion, yet another unusual aspect about kudu among antelope is that multiple adult males can live together without constant conflict.

“The two bulls we have now – the one with the wider horns is more food-motivated,” Jernigan said. “The other one seems to be the breeder, so he is more interested in the females. They generally do pretty well together. Maybe one will push off the other at the feed troughs occasionally.”

“In previous years, we’ve usually averaged one kudu calf,” he said. “This year, we’ve had two so far. Since I’ve been here, that’s the closest we’ve had kudu calves born together at just a couple of weeks apart.” 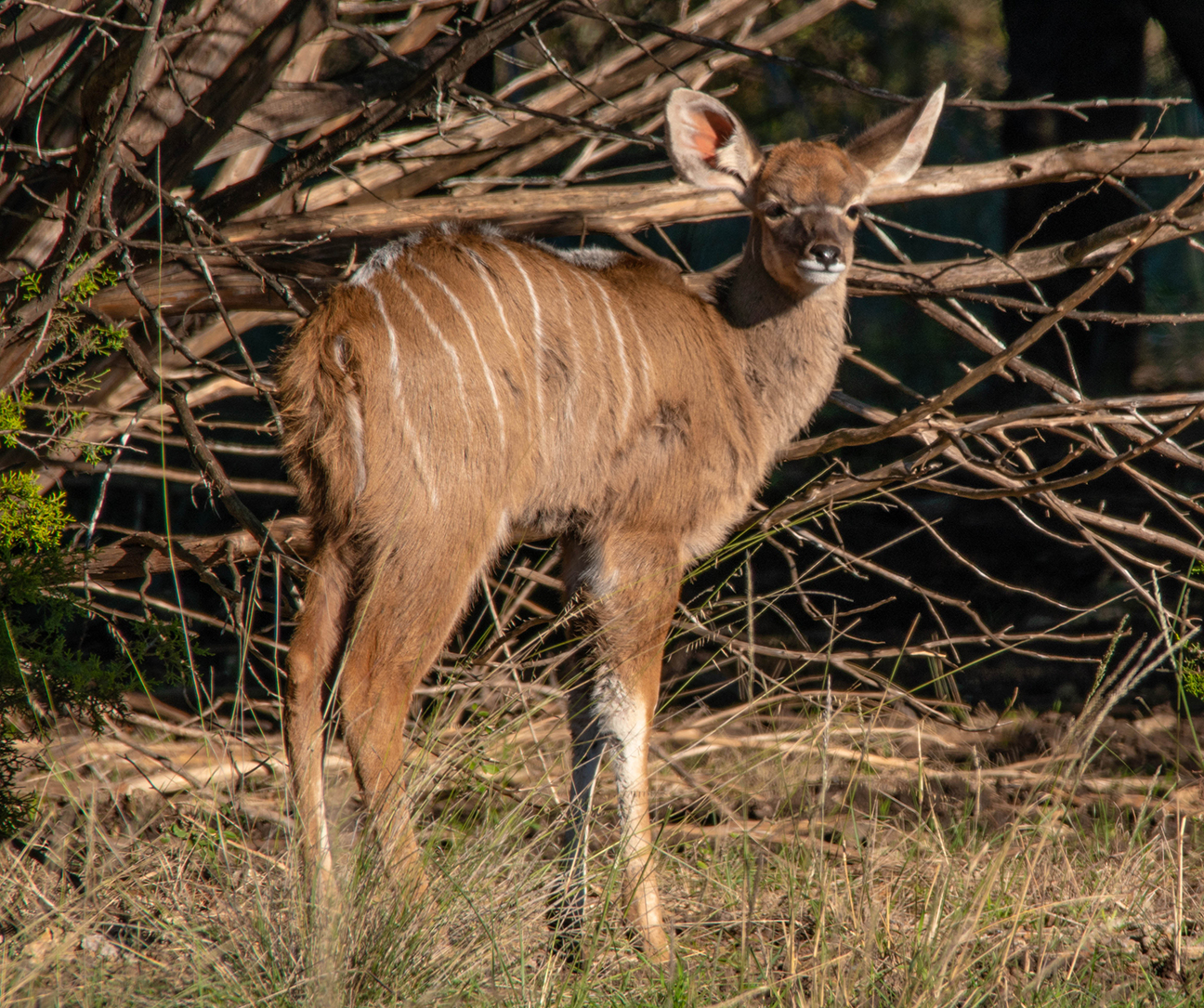 At Fossil Rim, kudu eat feed pellets with 14 percent protein, as well as alfalfa and browse.

“As far as browse, they will pick some of the lower branches off of the oak trees,” Jernigan said. “They also like hackberry. Ashe juniper isn’t great browsing, but I occasionally see them munching on it. The 14 percent pellets are better during the summer when more quality grass is out there, and then in the winter we bump up to pellets with higher protein.”

Fortunately, greater kudu have a population classification of “Least Concern” with a stable population trend.

“They have a healthy population in Africa right now with more than 400,000,” Jernigan said. “Kudu are actually one of the most commonly hunted African species because of their amazing horns. A significant percentage of their population lives on private ranches and in protected areas. Their shy disposition likely helps them in terms of avoiding some hunters.

“Similar to the situation with common wildebeest, the greater kudu is doing okay in the wild, but it’s a situation to keep an eye on. What we don’t want to do is think ‘they’re all right’ and forget about their conservation. That leads to trouble in the future.”