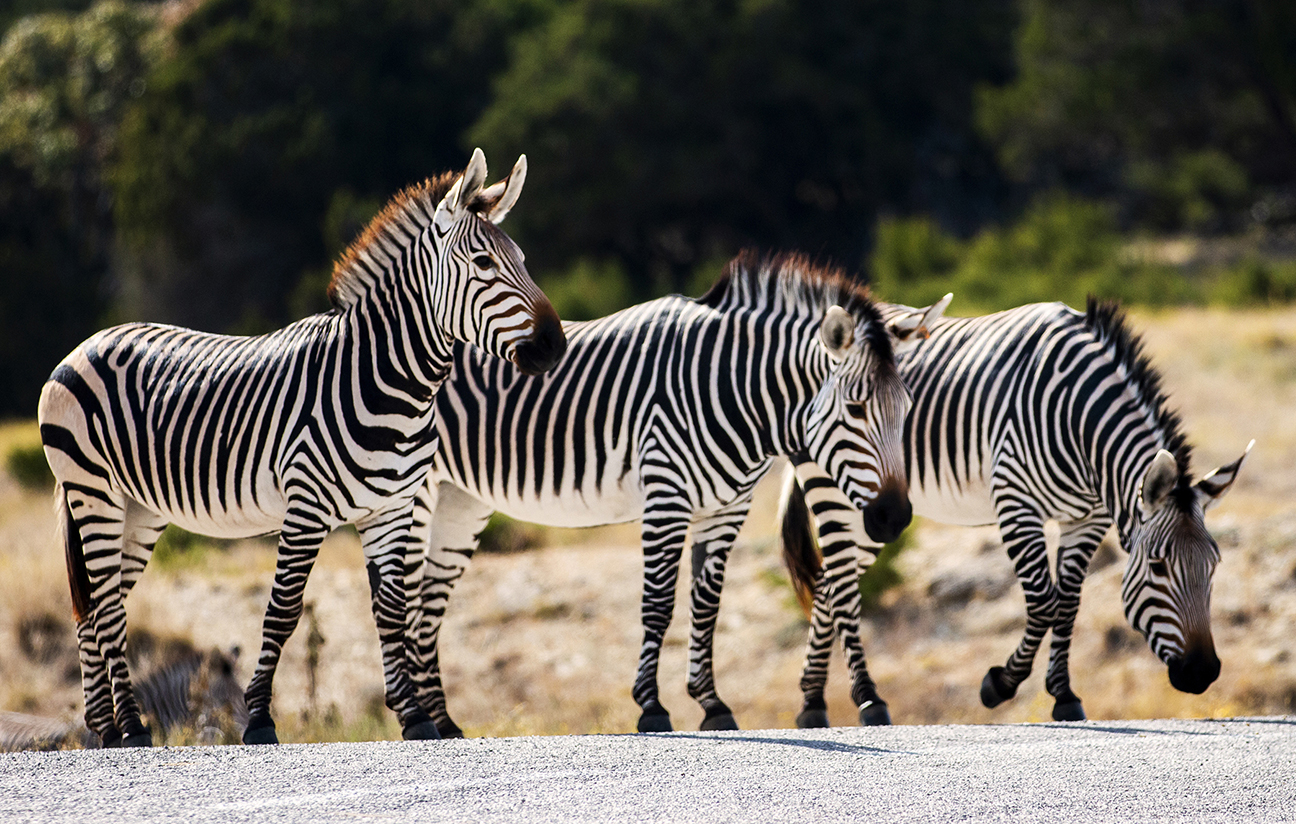 There are three types of equids, or mammals of the horse family, at Fossil Rim, but you are most likely to encounter the Hartmann’s mountain zebras.

“I have only worked with the Hartmann’s often, but I’ve always heard they are relatively good-natured compared to our other equid species,” said Molly Shea, Senior Animal Care Specialist – Hoofstock. “The Grevy’s are more temperamental, and I think the P-horses need to be more closely monitored, as opposed to being out in a large pasture.”

Certainly these three equid species are quite different from the antelope and deer species that live at Fossil Rim.

“Equids have different needs; their hooves wear differently and they require higher-quality grasses,” she said. “On the other hand, Arabian oryx can eat virtually anything they find in the Game Preserve. It is very important for equids to have water regularly, whereas the desert species can go much longer without drinking water.”

In the wild, Hartmann’s mountain zebras will dig for subsurface water when needed, which creates a water source for other animals, as well.

You will never see Hartmann’s alongside Grevy’s at Fossil Rim, but what if you did?

“Their striping is different,” she said. “Grevy’s have fine, thin stripes, while Hartmann’s have thicker stripes. If you ever saw them side-by-side, Hartmann’s are clearly smaller and more horse-like. To me, the Grevy’s look more like donkeys.”

While the Hartmann’s mountain zebra is one of the more dominant species in the Game Preserve, those zebras are not particularly social with other animals.

“They really mind their own business; you don’t see them pushing off other animals (from the feed line) much,” said Shea. “But, other animals will give them the respect and space they need. Occasionally, if the red deer are in hard antler they will push the female zebras off of the feed, but it’s really a case of minimal contact with other species.”

“We don’t feed hay as often in this pasture because it doesn’t have as many animals,” she said. “There are good grazing opportunities here.”

On that note, sometimes the Hartmann’s do not even come up in the morning when feed pellets are distributed on the road.

“If they don’t come up to the feed line, they’ll be fine,” Shea said. “The Hartmann’s are in really good body condition. It’s their choice – they know where feed is every morning; they can always feed on the pellets from cars later in the day. On the other hand, we will spot feed a female animal that is off by herself foaling or calving or we might spot feed the waterbuck herd, which spends a lot of time back by The Lodge.”

In the wild, Hartmann’s are located almost entirely in Namibia with numerous small pockets of the zebras in South Africa. While Hartmann’s habitat is generally described as grassland, they actually live on the edge of the Namib Desert where surface water can be lacking, so the herds must wander between the mountains and sand flats in order to find patches of grass. Despite having “mountain” in their name, Hartmann’s live at an elevation range of 0-3,000 feet.

“The Hartmann’s thrive in this pasture,” Shea said of the Game Preserve. “It’s drier, hillier, and a better match for their hooves than the other pastures. It is easier to keep track of them here than in the larger Main Pasture, plus they have more shade here and it is less populated by other animals.”

Hartmann’s mountain zebras have a population classification of “Vulnerable” with an increasing population trend. It has been a few years since the last birth, but there have been more than 20 Hartmann’s foals born at Fossil Rim.

“When we got our stallion, he was not yet an adult and he is still growing into his role,” Shea said. “His name is ‘Rico,’ and we look forward to him helping increase our Hartmann’s population.”

While a group of zebras can be called a “herd,” there are a couple of stranger terms that are also valid – “dazzle” or “zeal.” A herd may stay together for 15 years in the wild if a particular stallion remains dominant.

What sorts of sounds do the Hartmann’s make?

“The sound of a Hartmann’s is what you’d probably expect,” said Shea. “A lot of horse-like whinnying and squealing; you usually only hear it when they are pretty worked up and playing with each other.

“People tend to think zebras are really nice, but they are a lot more aggressive than given credit for. When they are playing with each other, it’s very rough with kicking and biting. It can look really bad, but it’s normal.” 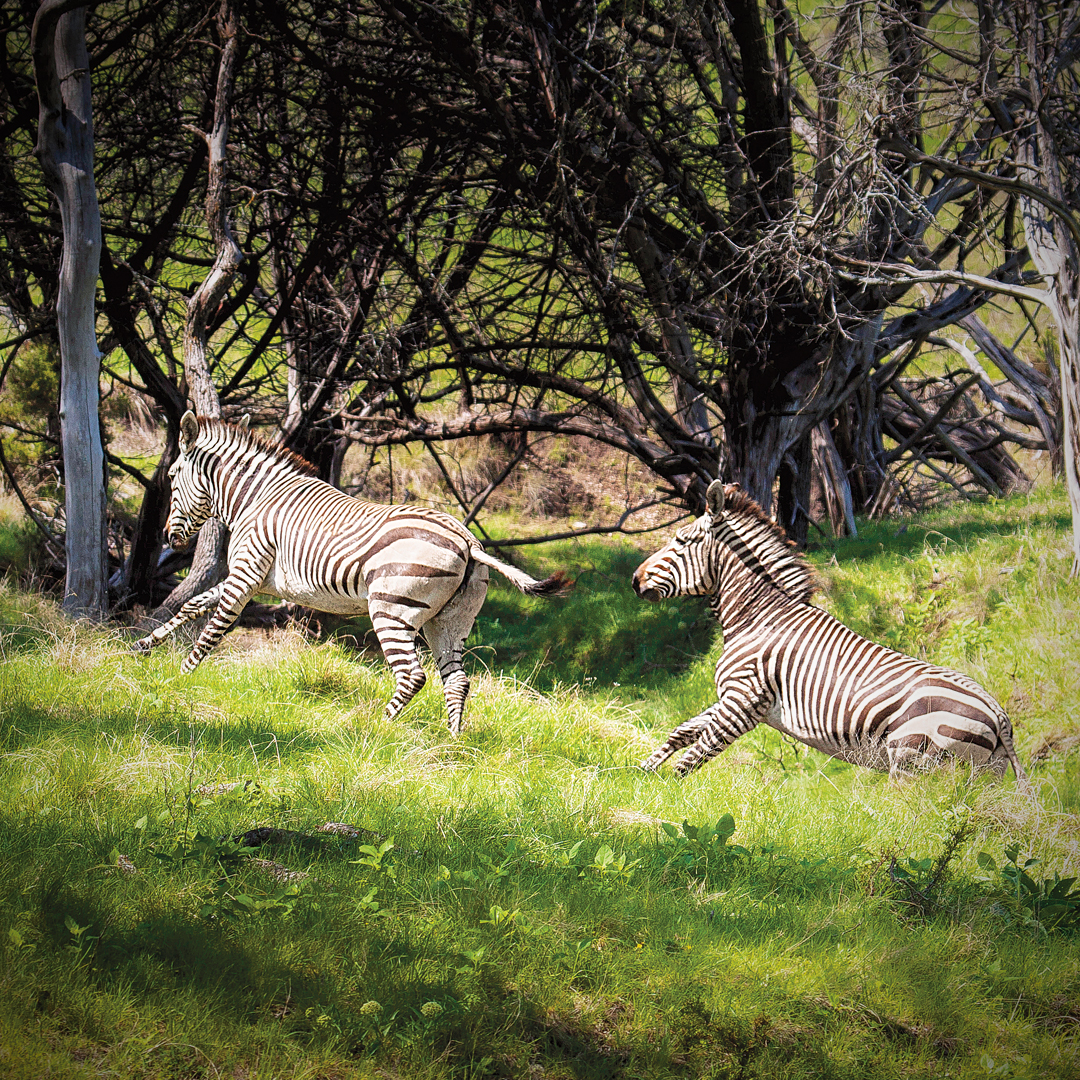 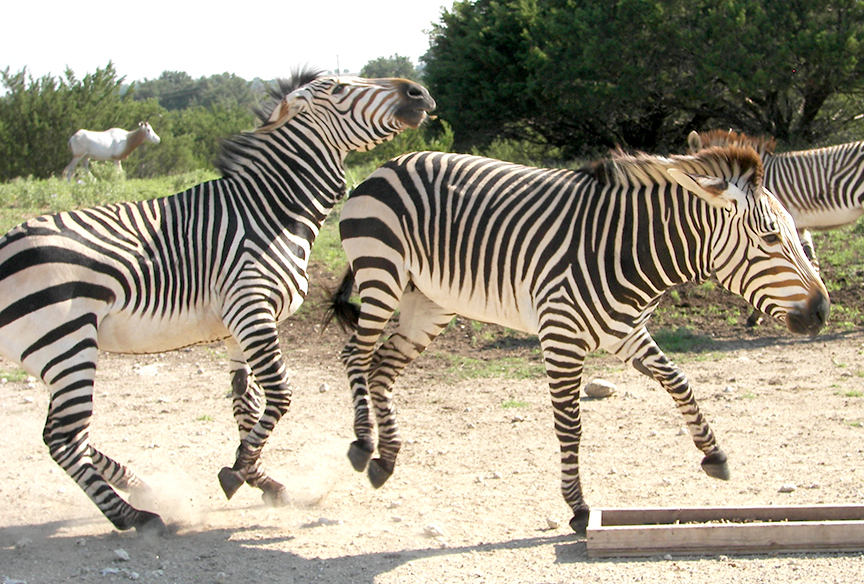 The Hartmann’s are a great example of why Fossil Rim rules only allow for hand feeding giraffes.

“As a staff member, you respect their space just like with our other equids,” she said. “They can kick or rear up. You walk around them and pay attention to their behavior.

“That’s why we ask you to throw the pellets on the ground. Hartmann’s are the most dangerous animal to hand feed, especially in terms of being bitten.”

Perhaps evidence of the Game Preserve being a good fit for the species, the Hartmann’s at Fossil Rim are not a group that often requires veterinary care.

“Our Hartmann’s are pretty hardy, so we don’t have to do a lot medically for them,” Shea said. “We recently did a knockdown to remove an ear growth and also did a hoof trim on her at that point. Ideally, they’ll wear their hooves pretty well naturally on this terrain. They do get annual vaccinations for rabies.”

Dr. Holly Haefele did mention some significant medical treatments for the species over the years, as well as the recent ear procedure.

“Hartmann’s have interesting feet; they have no frog like domestic horses and other equids do,” Haefele said. “It is a strange foot for farriers to work on. We have treated some severe injuries in Hartmann’s over the years, including a three-day-old foal with a severely infected leg wound. She and her dam were moved to the clinic and over about five months we were able to get the wound to heal; it was very intensive treatment.

“We also treated a mare with a severe wound infection on her hind end. We were able to treat it with hydrotherapy; we hosed it every other day to flush it and promote healing, which is often employed with domestic horses. She got used to it pretty quickly and we were amazed at how fast her wound healed.

“Just like domestic horses, zebras can grow sarcoid tumors. We recently had to resect a portion of a mare’s ear to completely remove a growth. If you don’t get all of the tumor, it can come back.”

The Hartmann’s mountain zebras can be a tough species to spot sometimes. 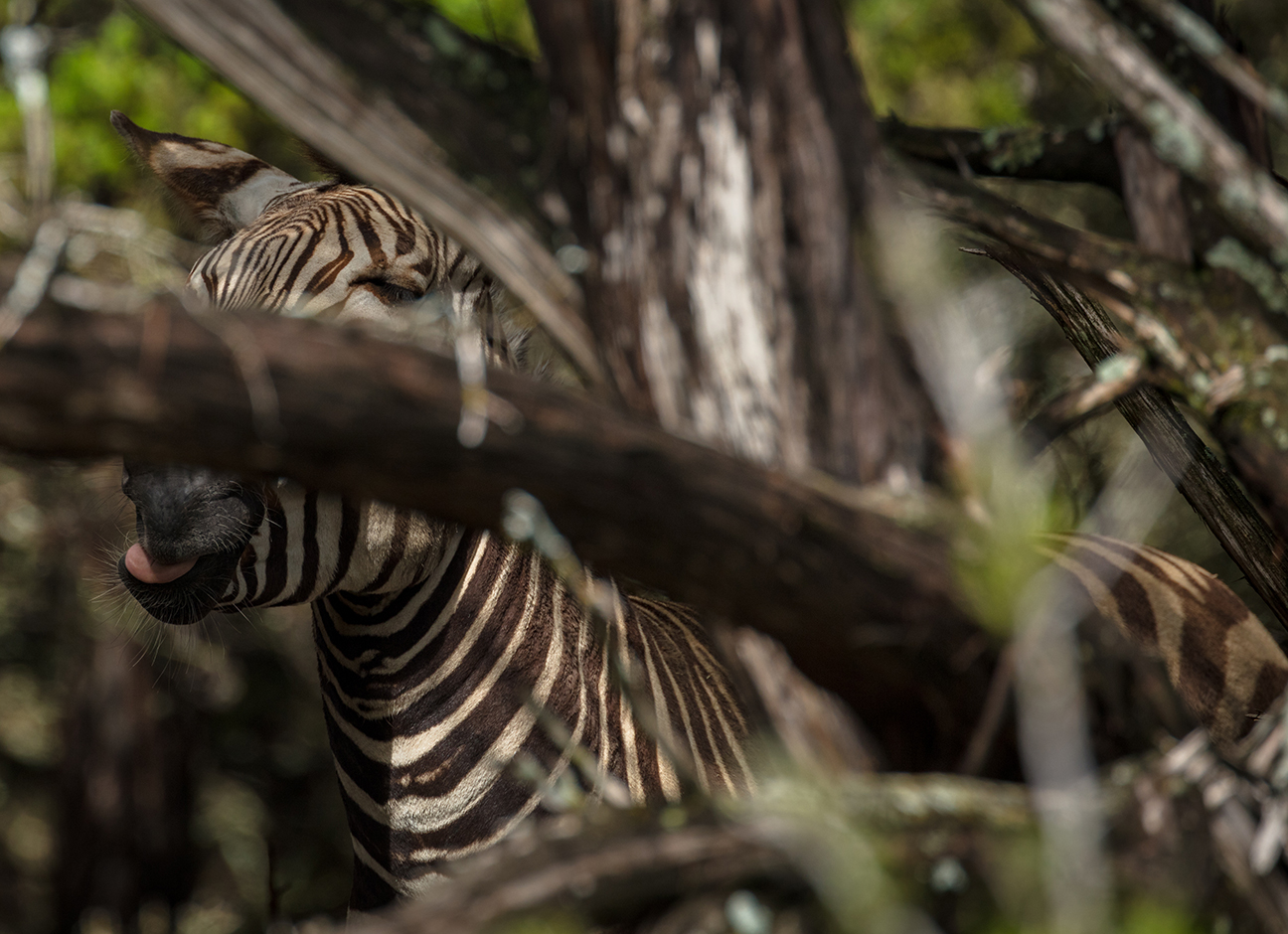 “We get a lot of people asking where the Hartmann’s are if they didn’t see them,” Shea said. “It’s hard to say, because they have access to 266 acres, so you never really know where they are going to be. More than most other species, they will really utilize all of this pasture – maybe up on Cheetah Hill, near the Overlook, or in either of the two corners. If you missed them, they were probably in the tree line blending into the darkness of the shade.”

Being observant is a key component of a great Fossil Rim visit, and keeping your eyes peeled for the zebras of the Game Preserve might help you spot some other elusive species, as well.