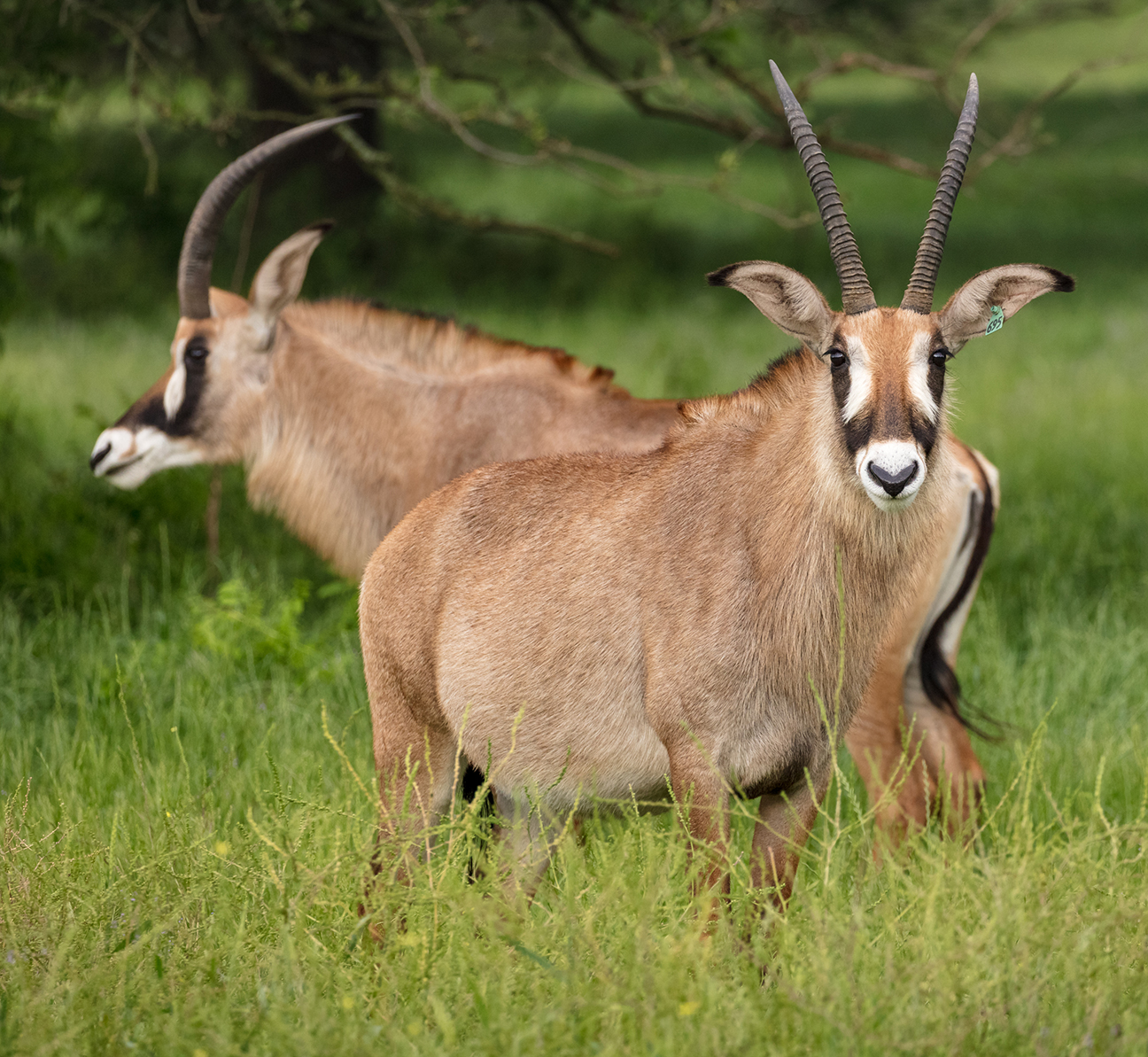 Roan antelope have arguably the most memorable ears at Fossil Rim, but there is much more to this large African native species.

For one, forming strong bonds is a characteristic of roan, which live in the Front Pasture – the first one you enter in your own vehicle.

“They have really strong family groups,” said Becca McLachlan, Animal Care Specialist – Hoofstock. “We introduced two new roan females last year from San Diego (Zoo Safari Park) because we wanted to (diversify) the genetics of the herd. With sable or roan, it is hard for adults to be accepted into a preexisting group. We have a family group with females born here and calves that have grown up here.

“The new females were seen as a threat and they had a rough couple of months, getting chased off by ‘11 Green,’ the dominant female. I don’t know if most people realize that, but it is always the females that try to push out the new females.

“Little by little, they’d get closer on the outskirts of the herd and were finally accepted. Kudu, for example, will accept new animals much sooner.”

On a related note, roan herd sizes are smaller than those of similar antelope and each roan maintains a greater distance apart from one another.

It is no surprise she mentioned sable, because that is the most closely related Fossil Rim species to roan. If a new guest were to incorrectly identify a roan, he or she would be most likely looking at a sable instead.

“One thing that’s going to be really helpful as you drive through is they are in different pastures – roan in Front Pasture, sable in Main Pasture,” McLachlan said. “Then, as you look at them up close to see characteristics, you can be sure what species you are looking at. They are similar in body size, shape, and horn structure as closely related animals. Roan are often a bit bigger and one of the largest Fossil Rim antelope, plus their horns are shorter and more sharply curved.

“Among males, sable turn black with giant horns, whereas roan bulls look very similar to females outside of slightly thicker horns and faces than can be darker. Even sable females are dark brown, while roan are a lighter shade with a mix of white and colored hairs.”

Not only do those two species need to live in different pastures, they require a pasture in between them – the Buffer Pasture.

“The two main reasons they are not in the same pasture are, first of all, because they are similar enough genetically for there to be a hybridization risk (if they mated),” she said. “Second, because they are related, the bulls will fight – so we don’t even let them have a common fence line. This is a great example of why the Buffer Pasture exists.”

“In the wild, they are much more spread out and the chances of hybridization or fighting are lessened,” McLachlan said.

There is a genus of antelope, Hippotragus, which includes three species – roan, sable, and bluebuck. Believed to have gone extinct in 1800, the bluebuck is the first historically recorded large African mammal to become extinct.

Renowned for their strength and aggressive defense of their herds and calves, roan in the wild will even take on lions. They are atop the dominance hierarchy in the Front Pasture.

“I don’t see the roan seeking conflict with other species,” McLachlan said. “If a feed line has been poured and roan want to eat there, they definitely will. Other animals give them space. They make a snorting noise that is a warning, which we sometimes get as animal care specialists when we have poured out the feed. I have never been charged, but I’ve been stalked and it was clear I needed to move further away.

“All hoofstock can be aggressive if you get too close to them or especially their calf. If you are feeding an animal right by your car, you may not know that its calf is a few feet away. It’s always important to be observant about how these animals are behaving.

“When I feed roan, I like to make sure I have plenty of space to walk back to my truck. I don’t walk next to them, plus I’m always thinking about an escape plan if I was ever charged for any reason.”

“Roan breed year-round in the wild,” McLachlan said. “When we do get a new bull, we put him out in the summer in an effort to target spring births.”

When calves of roan or any Fossil Rim antelope other than wildebeest and blackbuck are born, the animal care and animal health staff will perform a neonate exam in the first 24 hours if possible.

“You usually have to find a roan calf when it is with the mother,” she said. “Trying to find the calf when she has it tucked away – you’re not going to. You watch the mother nursing and grooming the calf until she tucks it, usually out in the tall grass of the Office Pasture, which is located right past that barn on the right after you first enter the Front Pasture. She leaves to return to the herd, and then we know we can drive out to that particular spot in the grass and do a neonate exam.

“On the other hand, if you try to do an addax neonate exam, the mother is usually close by and running over to protect her calf. Even though the roan mother will go further away, if the calf vocalizes you need to expect that the mother will come running. Roan calves look like they are on stilts because their legs are very long.”

Speaking of a roan vocalizing, it is apparently a memorable experience to hear.

“Roan have a very high-pitched vocalization, even as adults,” said Dr. Holly Haefele. “It is more high-pitched than sable and is weird to hear from such a large animal. I practically went deaf for a bit once when a neonate screamed in my ear.”

McLachlan noted that the “high-pitched squeal” used by mother and calf is the most frequent sound she hears from the species.

“In an aggressive roan-to-roan interaction, I’ve heard what I would describe as a low, growling noise,” she added.

It seems roan do not require a lot of attention from the Fossil Rim veterinarians.

“They rarely need medical procedures,” McLachlan said. “Mainly parasite control through darting with dewormer, and occasionally they require anesthesia for dewormer to be administered.”

What do roan eat at Fossil Rim?

“Mainly feed pellets, grass, and hay,” McLachlan said. “They are primarily grazers here, but they also browse on live oak leaves that they can reach, for example. They like the round (hay) bales a lot that we put out in the winter.

“In the holding pens, they get coastal hay, alfalfa, pellets, and browse. Sable may eat the browse, but they aren’t as interested in it.”

Roan have a population classification of “Least Concern” with a decreasing population trend.

“Obviously we want to help all of the critically endangered species we have like addax, scimitar (horned oryx), and dama (gazelle) since they have a clear need for our help,” McLachlan said. “But, we don’t want these other species to get to that point. As soon as you see a population decreasing, you want to stabilize it or increase it instead of seeing that species get into the situation those desert antelope face.

“(The critically endangered species) require so many resources and the genetics are depleted with such small populations that it is a massive undertaking. I think it’s really important to be proactive in conservation.”

If guests do not see the roan herd on their Fossil Rim visit, McLachlan has an idea about where they may have gone.

“They are probably relaxing up under the trees, especially in the summer in order to get some shade,” she said. “The roan herd is definitely one of our most mobile (groups); I’ve seen them all over the Front Pasture. Meanwhile, the wildebeest, for example, will stay closer to the front of the pasture.

“Also, the roan could have gone into the Office Pasture that we have open occasionally. That’s usually where the roan prefer to calve and then tuck their calves.”