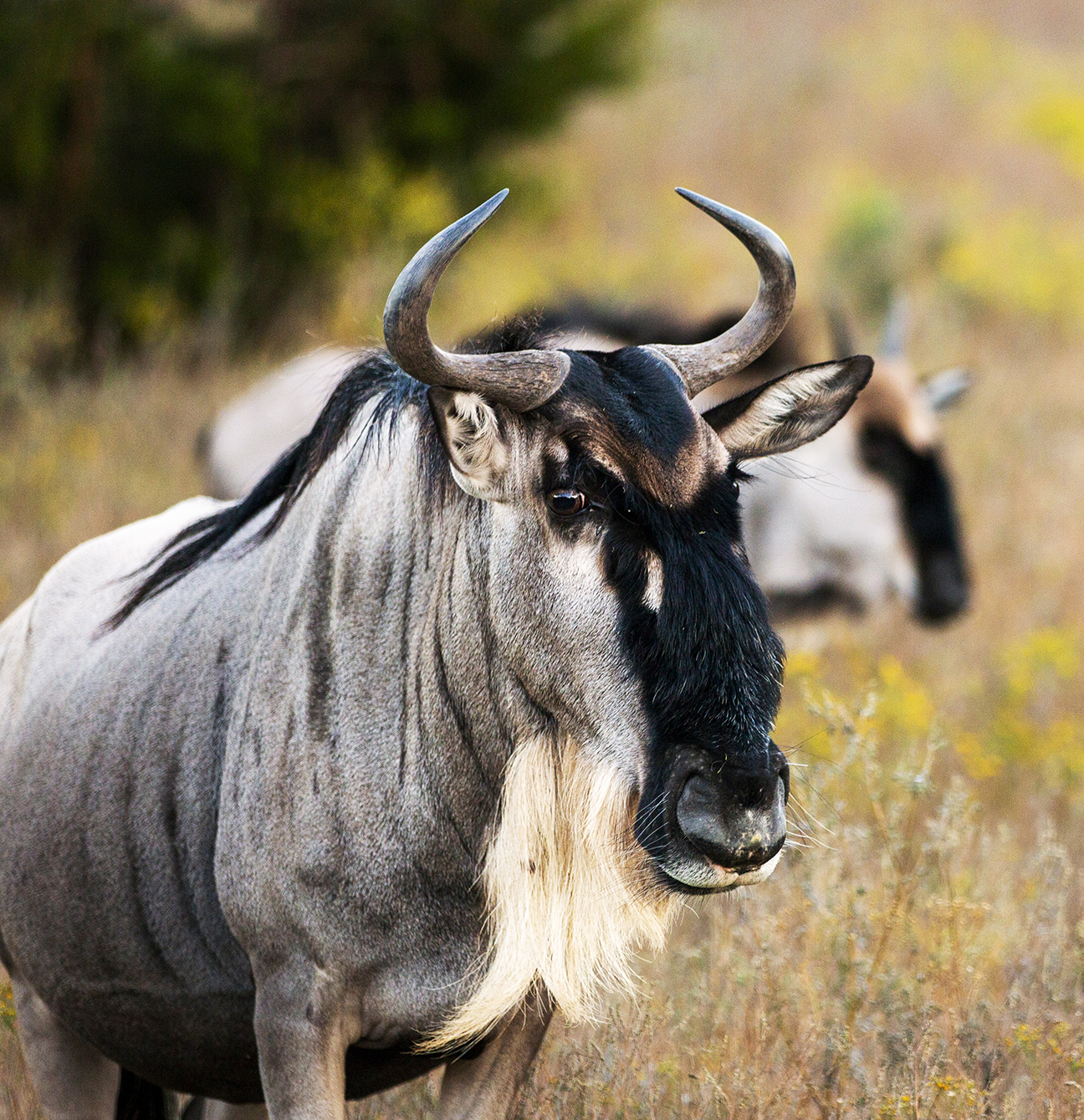 Common wildebeest reside in the Front Pasture at Fossil Rim, but you may also see them referred to as blue wildebeest, white-bearded wildebeest, or even brindled gnu.

“If you see them in the right light, their coats almost look blue and that’s why you hear ‘blue wildebeest’ sometimes,” said Ben Jernigan, Animal Care Specialist – Hoofstock.

Larger than black wildebeest, which are a different species, common wildebeest can exceed 48 inches tall at the shoulder and weigh up to 650 pounds.

With many natural predators in their native habitat – grassy plains and open woodlands of central, southern, and eastern Africa – it helps that wildebeest can run up to 50 mph. That puts them right up with blackbuck as the fastest animals at Fossil Rim other than cheetahs.

“When the wildebeest get wound up and hit their full stride, they definitely zoom around their pasture,” Jernigan said. “If they are chasing one another or there is really nice weather, they’ll do some energetic kicks and you can see their speed. Wildebeest are definitely more athletic than their normal stride and build leads you to think.”

With a heavy build and disproportionately large forequarters, wildebeest may look more bovine to some people, but they are actually an antelope. Males and females do not look significantly different.

“Until they reach adulthood, wildebeest are not an easy species to identify by gender,” Jernigan said. “When we do a necessary procedure on a wildebeest, we do give it an ear tag. Left ear is female and right ear is male.

“Generally, the males are larger, but that is only something to consider for adults. If you look closely at each individual wildebeest, you can see facial features and markings that differentiate them from each other.”

Wildebeest are one of the famous examples of migratory animals. Some of them travel up to 1,800 miles each year and as many as 1.5 million wildebeest take part in the migration. Animals like ostriches, zebras, and gazelle migrate right alongside them.

At Fossil Rim, the wildebeest tend to keep to themselves to a greater degree.

“Generally, each antelope species has its separate zones from the others,” Jernigan said. “The wildebeest and roan will share feed stations sometimes, if the roan don’t push them off. On occasion, you’ll see the wildebeest share an area of pasture with the roan or scimitar-horned oryx, but usually each species stays by itself. Roan and scimitar are more dominant species, which put them higher in the hierarchy of this pasture.”

The rapid calf development of wild wildebeest does carry over to the Fossil Rim population.

“Wildebeest naturally only breed once a year and we usually get calves from May to July,” he said. “The breeding bull lives with the herd all year; both he and the previous bull seem to prefer to split the herd into two groups. Currently, the smaller group is the older females who aren’t breeding and the bigger group is the reproductive females. He usually stays with the bigger group, but you can see him with the smaller one, as well.

“You will often see wildebeest calves start to get up shortly after their mother has cleaned them up from the birthing process. Within 30 minutes of birth, you might see them up and moving about. Once they start walking, they’ll stay up with the herd from then on.” 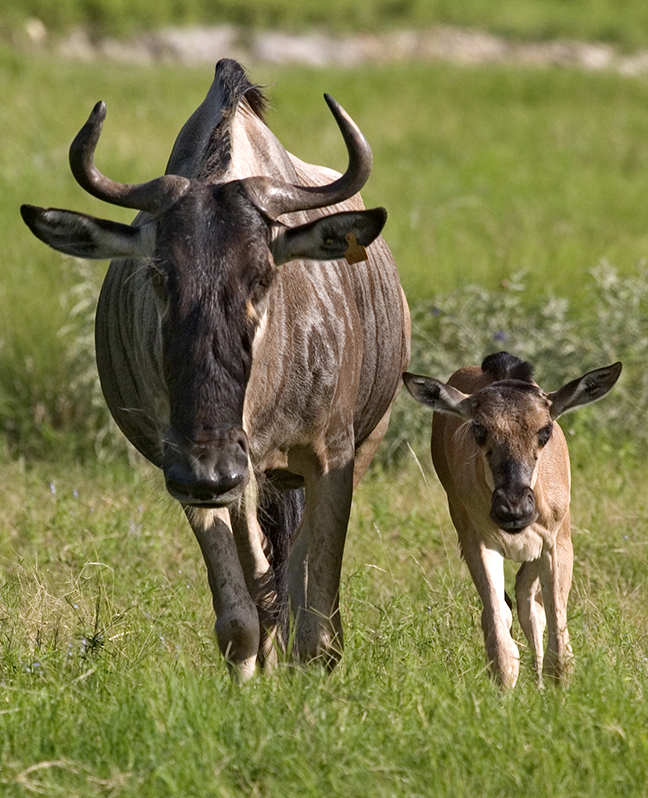 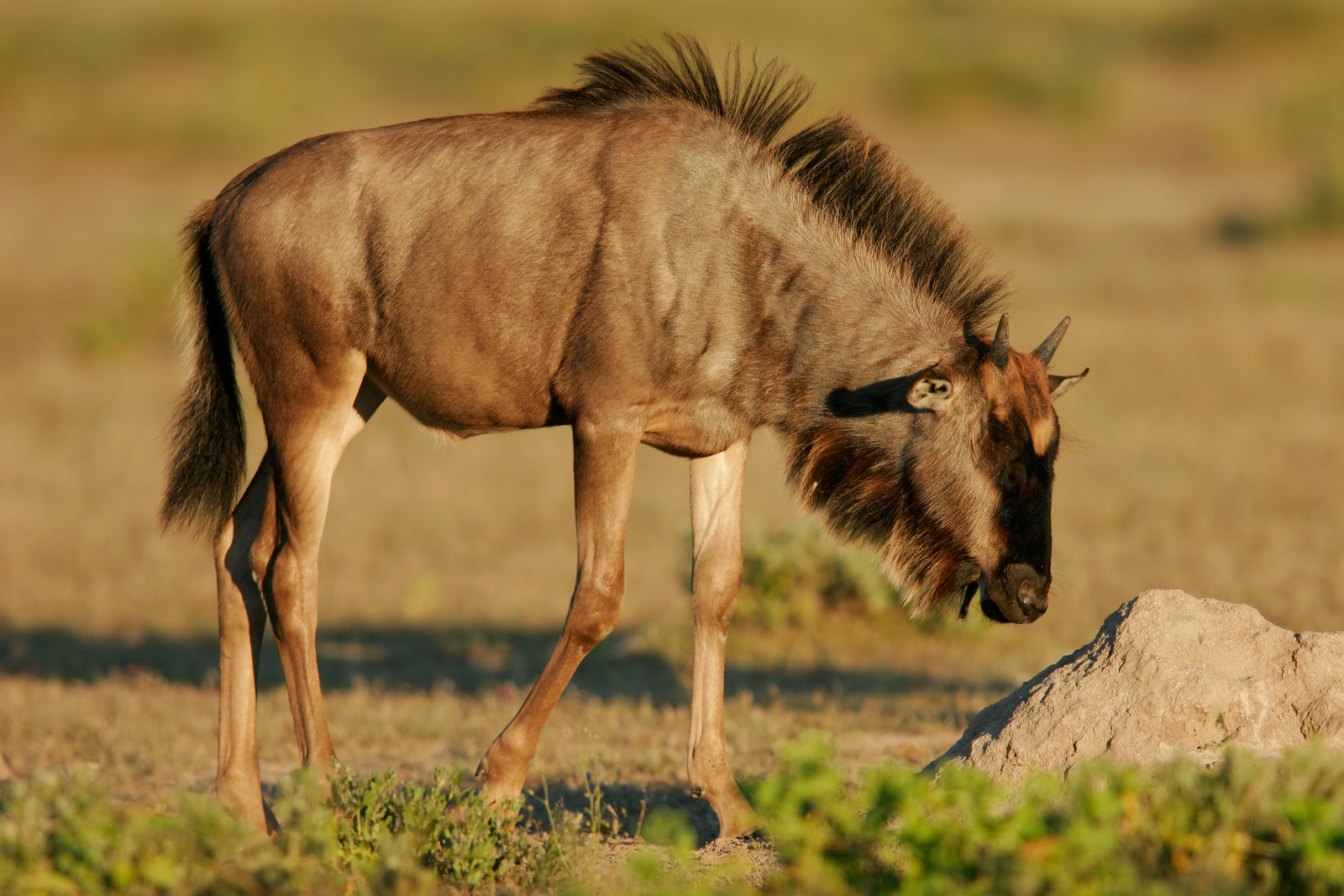 Migrating herds of wildebeest in Africa are active day and night as they graze constantly. This helps explain why a newborn wildebeest needs to be up and moving as soon as possible. All other antelope species other than blesbok hide their newborn calves for a period of days or weeks; in fact, wildebeest are believed to be the earliest-developing hooved mammals.

“Especially with our other antelope species, they tuck their calves away (in the woods) for a while and that’s not what you see from wildebeest,” Jernigan said.

“They aren’t a particularly vocal species here,” he said. “You’ll hear some soft moaning from calves, and sometimes an irritated snort from the adults if I’m too close.”

Interestingly, a field experiment a few years ago regarding Serengeti wildebeest showed that females exposed to playback of male rutting vocalizations are over three times more synchronous in their expected time to mate than a control group isolated from all male stimuli. So, their estrus is synchronized by male vocalization and that is why so many wildebeest calves are born together in a small time window in the wild.

Besides feed pellets and hay, the wildebeest at Fossil Rim can be seen grazing short grasses. Jernigan knows what to expect when it is time to feed the wildebeest each morning. 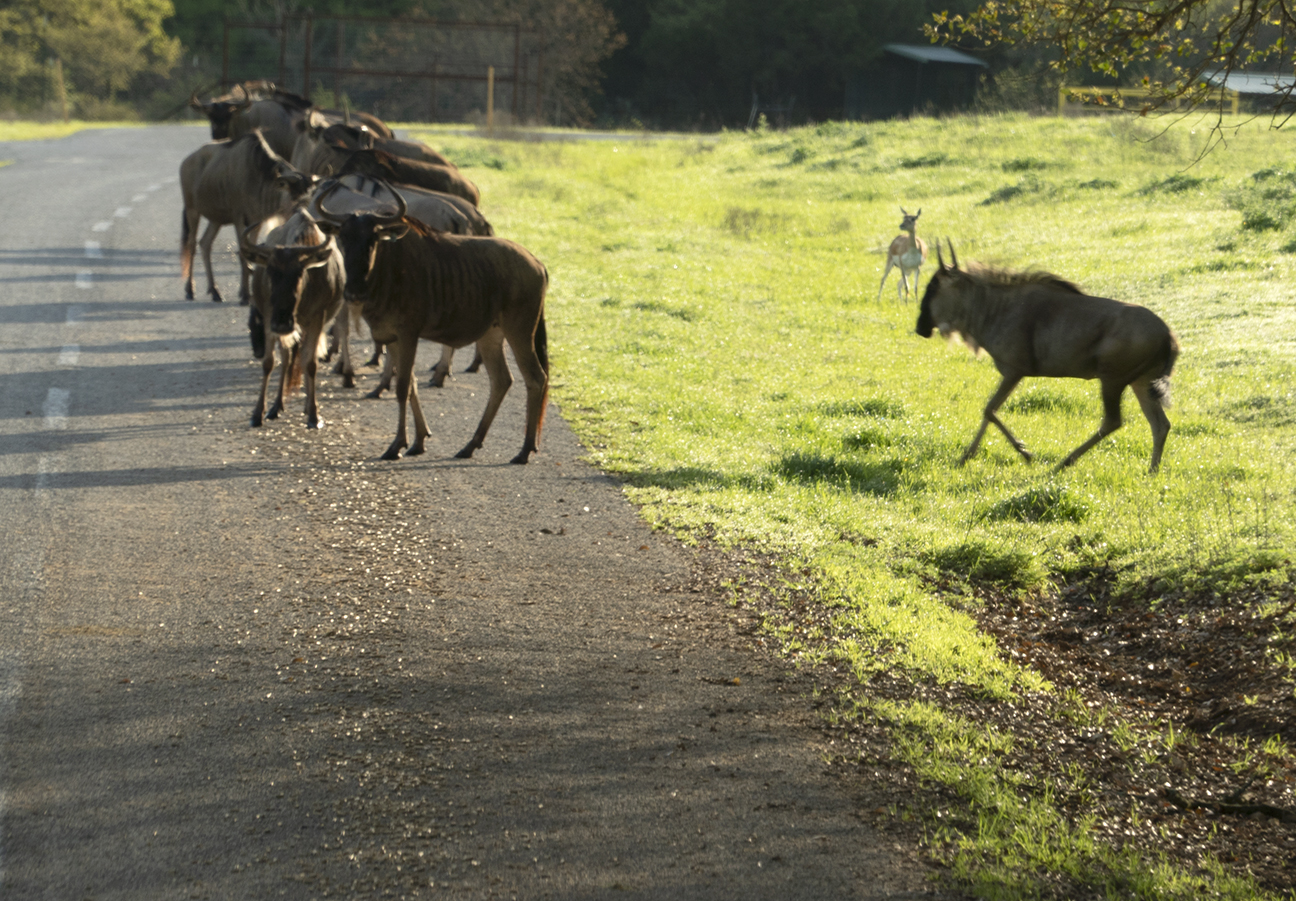 “The wildebeest are generally sitting in the middle woods of this pasture,” he said. “I’m basically feeding a triangle of spots around them in the morning. If the roan push them off the first station, they’ll go to the second or the third.

“Usually, the smaller group goes to the second feed station, while the bigger group will bounce to the different stations if they get pushed off by other species. The wildebeest don’t seem as comfortable around me and the other animal care specialists as the roan or the scimitar, so I think that’s why they don’t wait at a station to be fed like those others.”

Speaking of the scimitar-horned oryx, guests are definitely more likely to see the wildebeest drinking from a pond.

“Certainly more than a desert species like the scimitar, and a bit more than the roan, I’ll see the wildebeest on the move to go drink some water each day,” Jernigan said.

On the other hand, sometimes the wildebeest may not be seen by passing visitors.

“If you aren’t seeing the wildebeest, they are probably in the woods on the (right) side of the pasture in the morning,” he said. “Later in the day, they are more likely to be over by the White Rhino Yard eating pellets off the road.”

This is not a species at Fossil Rim that the veterinarians need to spend a lot of time working on.

“They are easy to care for – nothing fancy for them,” said Dr. Holly Haefele. “They are challenging to dart (for anesthesia), however. We have to try lots of tricks, including darting from a tour van and our own vehicles. We have also hidden in the woods and in trees, which made it tough for them to catch on.

“They are a very herd-minded species. Wildebeest are pretty cool for sure.”

Common wildebeest have a population classification of “Least Concern” with a stable population trend. Even so, they have a Species Survival Plan (SSP) within the Association of Zoos & Aquariums (AZA).

“No matter what the conservation status of a species is, it’s important to have an SSP for them to maintain good genetic diversity within the population among AZA institutions,” Jernigan said. “Even ‘Least Concern’ is still a concern. Humans are encroaching more and more on animal populations every day. We can’t guarantee (the situation) won’t go downhill for (wildebeest) at some point, so you want to have a herd with established genetic diversity.”