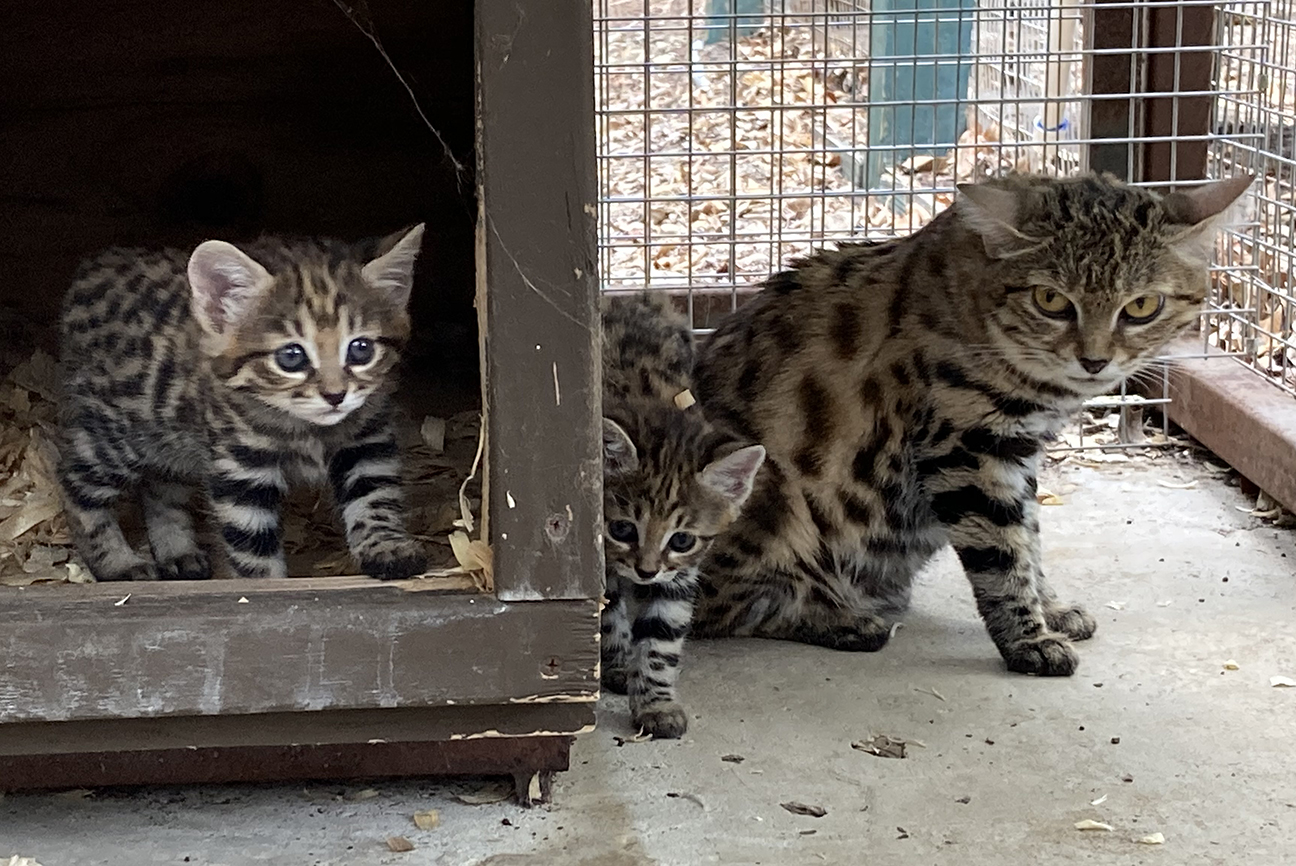 The black-footed cats (BFCs) “Huck” and “Afryea” are doing a great job for their program at Fossil Rim.

For the second-straight year, they have produced two kittens! After Afryea, also known as “Small Fry,” gave birth to two kittens on March 29, 2019, she had two more on June 30 of this year.

“We don’t know the genders of the kittens quite yet,” said Carnivore Specialist Tessa Townsend. “Due to their small body size, it is difficult to determine sex on kittens when they are very young and we have been very hands-off with this litter to give Afryea and the kittens more privacy. We will confirm the sex of the kittens during their upcoming six-week vaccinations. Black-footed cat kittens typically weigh 2-3 ounces at birth.

“We got our only weights on them so far when they were two weeks old, as each weighed about 200 grams. We are very hands off with our animals, especially when it involves managing litters, so we will wait until the vaccinations to weigh them again.”

Townsend said they have had their eyes open for a while now and have started to move around their yard and play with each other more often.

“For the first couple of weeks after they were born, we made sure to keep quiet when near the BFC area and spend a minimal amount of time in their yard for feeding and cleaning,” she said. “We didn’t want to stress out Afryea or disturb bonding time between her and the little ones. From the experience gained last year, we had a better idea of how quickly the kittens develop and how to best accommodate that.

“This time around, we know more precisely when to start offering them solid food, as well as when they would start using their yard more. Additionally, we had a better idea of what to expect from Afryea with her changes in behavior during pregnancy and afterwards.”

The kittens will nurse until they are weaned at 2-3 months old. After that, they will be eating what all of Fossil Rim’s other black-footed cats eat – commercially made ground lean meat and prey items like small chicks and mice.

Time will tell where these kittens end up as they grow older, but for now they get to spend each day with their mother in the Jim Jackson Intensive Management Area (IMA). 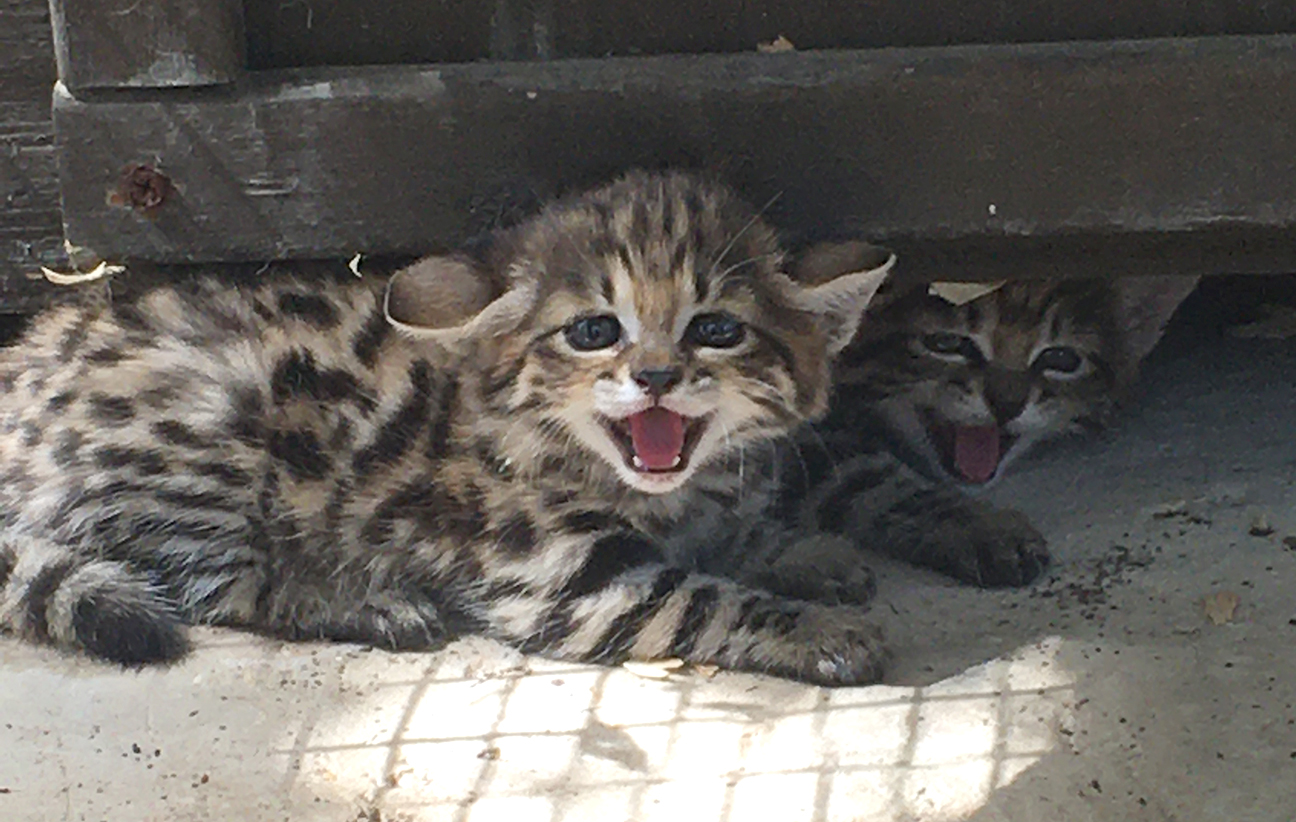 “It depends on the situation as to when we will transfer kittens, but black-footed cats are mostly independent at 3-4 months of age and we typically wait until they reach at least six months old before transferring them,” Townsend said. “If we have space and they are not recommended for breeding, we’ll keep them as long as needed. The kittens born here last year were transferred to different facilities on breeding recommendations when they were around 10-11 months old. ‘Arwen,’ the female we transferred to San Diego (Zoo Safari Park), successfully bred and had a litter already!”

“Huck and Afryea were introduced in July 2018,” she said. “They were both fairly young and had never been put in a breeding situation before, so it took a while for them to warm up to each other. Fortunately, they did eventually bond and produce their first litter of two kittens in March 2019.”

As compared to the 2019 litter, Townsend and Carnivore Curator Jason Ahistus were more certain of the window during which Afryea would give birth this year.

“Huck and Afryea displayed breeding behavior upon introduction in April this year and the trail cameras that we have placed around their yard picked up (evidence of) breeding during the night,” Townsend said. “From this, we were able to start a countdown for 63-68 days. Additionally, Afryea started gaining a significant amount of weight and we confirmed that she was pregnant with two kittens by radiographing her while she was in a crate. Huck was moved to a separate yard when we confirmed the pregnancy because males do not play a role in raising offspring.”

With this year’s litter coming three months later in the calendar than the 2019 kittens, Townsend explained that black-footed cats do not have a set breeding season. Females can go into estrus at any time during the year and can typically have up to two litters annually.

Townsend is the primary animal care specialist for BFCs, but Ahistus and Cheetah Specialist Jess Rector both know the routine, too. They collaborate on husbandry and procedures, plus Ahistus manages Fossil Rim’s black-footed cat program. The carnivore intern also takes part in caring for this species.

“Fossil Rim has been part of the Black-Footed Cat SSP (Species Survival Plan) since 2014, and I think we have made good progress since then,” Townsend said. “I believe with the past several years of learning these small cats’ behaviors and personalities, we’ve improved at managing them. Plus, we are applying what we learn from each litter to care for new kittens.

“It’s very rewarding to see animals you care for feel comfortable enough in a captive situation to exhibit natural behaviors, such as breeding and raising offspring. It helps let us know that we’re doing our jobs well.”

“In our experience, BFCs are secretive about everything they do, plus they are not on the scenic wildlife drive and encounter little interference from the public and staff here,” he said. “That allows them to go through a natural behavior pattern. It makes them difficult to see, and it’s harder for us to learn about them, but they are doing what they are supposed to be doing, and that’s the most important thing for a successful program. This is an example of what makes the IMA great for difficult-to-breed species.

“Our considerations for these kittens are very different than cheetah cubs. The BFCs in general don’t seem to be as high-stress of a species as cheetahs, so we can sit back and let nature take its course without having to worry about stepping in.”

For people not familiar with black-footed cats, it is always worth mentioning how fantastic they are as hunters in the wild. A BFC brings down more prey in a single night – 10-14 rodents or small birds – than a leopard does in six months, according to the PBS Nature miniseries “Super Cats.” With a 60 percent hunting success rate, they are about three times more successful than lions and are legitimately the deadliest cats on Earth.

Even with that prowling prosperity, black-footed cats are classified as “Vulnerable” with a decreasing population trend, so conservation efforts like the one underway at Fossil Rim are crucial.

“BFCs face several manmade threats,” Townsend said. “Overgrazing by livestock has led to a reduced prey base for them and they also fall victim to indirect poisoning. As a part of the Black-Footed Cat SSP, Fossil Rim is helping ensure a sustainable captive population, as well as educating people about this little-known species.”

The Children’s Animal Center and the IMA are currently closed to the public, but when they reopen, Townsend has some advice for visitors hoping to see the black-footed cats.

“Early in the morning is your best chance at viewing BFCs, since that is when they are most active,” she said.