Aoudad: Not An Antelope But Still Awesome 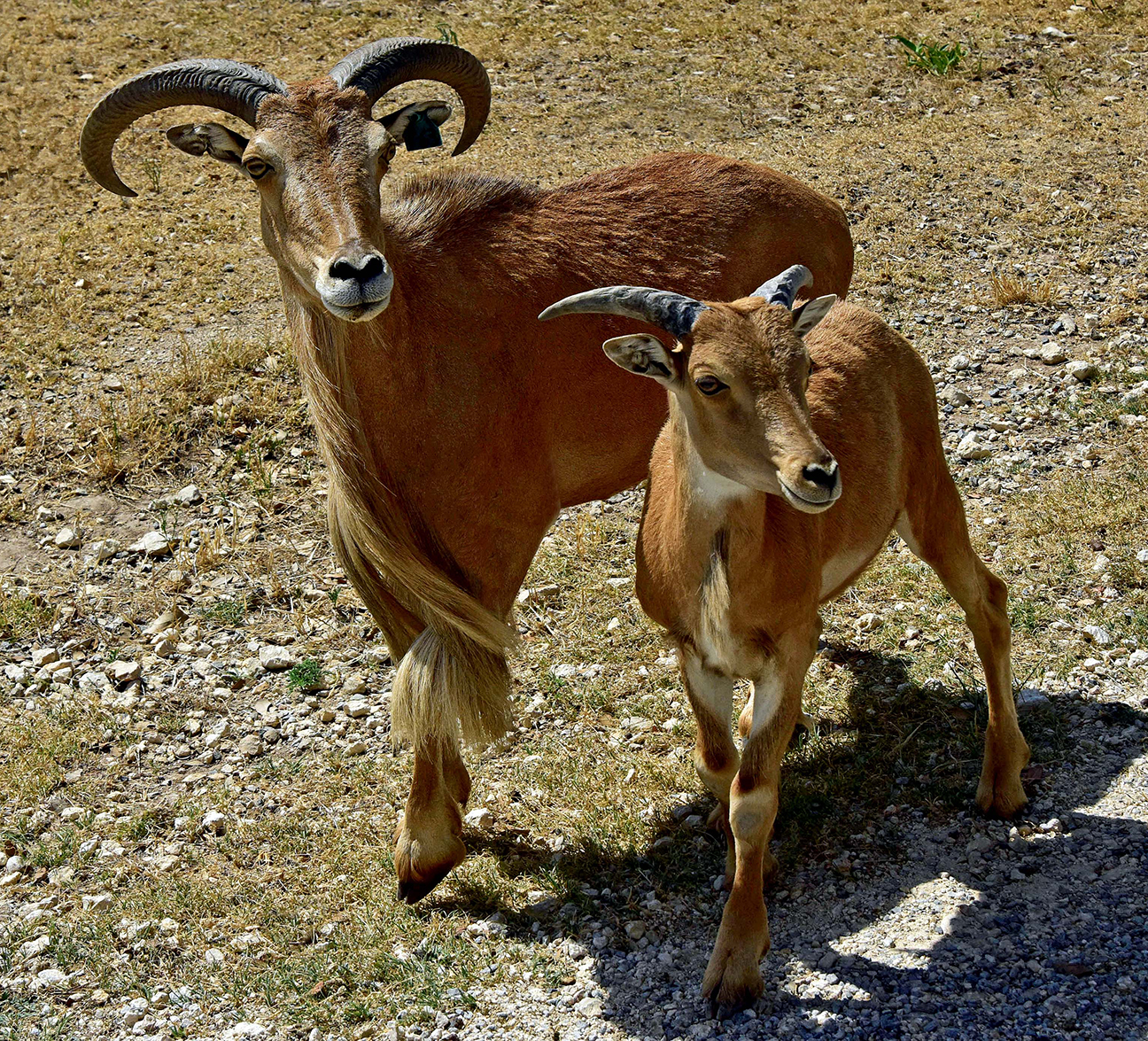 When you are traveling through Fossil Rim and enter the Game Preserve – the fourth pasture from the Admission Center, you may see an animal that looks far different from the antelope here.

Is it a sheep? Is it a goat? Well, how about both! You are looking at an aoudad.

“They stand out primarily because they aren’t a typical member of the Bovidae family,” said Molly Shea, Kordofan Aoudad Program leader for the Association of Zoos & Aquariums (AZA), as well as a Senior Animal Care Specialist at Fossil Rim in the hoofstock department. “They are not antelope. They are (in a subfamily called) caprids. Aoudad are technically wild sheep.

“But, caprid means relating to goats. Bighorn sheep are also caprids, so there are some similarities in appearance. If you compare aoudad to another animal, bighorn sheep and Dall sheep both make sense. Others that may come to mind include takin, ibex, and markhor.”

Dr. Julie Swenson, who is one of the most knowledgeable staff members at Fossil Rim about taxonomy, also discussed where the aoudad fits into the animal world.

“Antelope are in the same family – Bovidae – but are in different subfamilies from aoudad,” Swenson said. “Technically, domestic sheep and goats are more closely related to each other than either is to Ammotragus – the genus for aoudad. Conventionally, we call them Barbary sheep, not Barbary goats, so it gets a bit confusing. In an attempt to keep it simple, aoudad are a type of wild caprid and are related to domestic sheep.”

Speaking of appearance, as Shea began to discuss, let’s explore that further.

“They are shorter and stockier than the antelope here, plus they have thicker horns that are closer to their heads than antelope horns are,” Shea said. “Antelope horns are more for goring, while most caprids have horns built for ramming. Watching two male aoudad fight is pretty impressive. You can hear their horns clash from far away and the impact is so hard that they both come off the ground. You don’t want to get between an aoudad and something it wants to ram; you really don’t want to be its target.

“Aoudad eyes are similar to goats and sheep in that they have a rectangular pupil. They have a long beard; when they wallow in the mud I think it helps keep them cool. 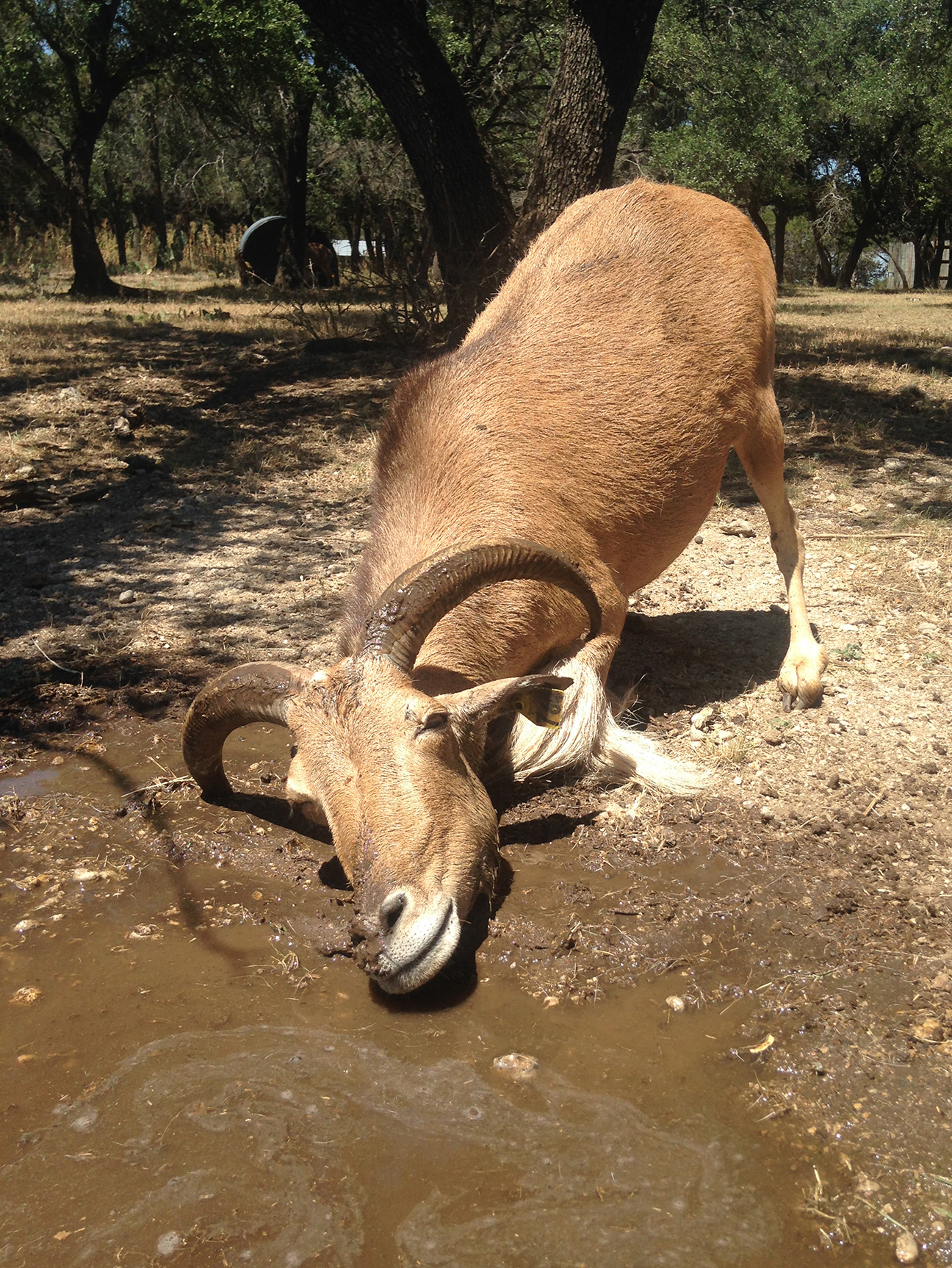 “Their hoof design helps them be more upright on their feet, similar to a human being on their tiptoes. This allows them to easily travel over rocky, steep surfaces that other animals would struggle with. Most other hoofstock are more flat-footed.”

As is the case with all of Fossil Rim’s pasture animals, animal care staff put a lot of thought into which pasture made the most sense for the aoudad.

“I think the setup of the (Game Preserve) pasture with the rockier cliff bases is a better fit for the aoudad,” she said. “They like to use those rocky areas to get away from the other animals or people. I think they would do well anywhere at Fossil Rim, but they seem to thrive here.”

In Africa, aoudad have a population classification of “Vulnerable” with a decreasing population trend. However, if the aoudad roaming wild in Texas and other parts of North America, as well as Spain, were considered, the population numbers skyrocket.

An abstract published in 2017 and found on bioone.org helps explain these transplants. It states that the aoudad in North America escaped captivity as game animals or park attractions, so that population does not count towards the “wild population.” Instead, they are known as “alien aoudad.”

“Those animals aren’t managed, so nobody knows if they are generic aoudad or otherwise,” Shea said. “When you look at the success of aoudad in Texas, they just seemed to fill a niche.”

The aoudad at Fossil Rim do not require much attention from the veterinary staff, which plays into the theme of the species being well-suited for a Texas environment.

“Aoudad are as low-maintenance as the rest of our hoofstock, which are pretty simple to care for in general,” Shea said. “Occasionally, they need parasite treatments and hoof trims. They are usually pretty hearty in cold weather.”

An aoudad is not a slow animal by any means, but its agility and strength are what make it more athletic than most Fossil Rim animals.

“An aoudad can definitely run up the side of a cliff face faster than any other animals we have, which I think is pretty impressive,” Shea said. “They are certainly athletic animals.”

Decades ago, Fossil Rim became home to what are known as generic aoudad. They still live here, and all of them are older males.

In 2015, Fossil Rim acquired Kordofan aoudad. There is a small herd of this subspecies, and several lambs have been born. All of the aoudad live in the 266-acre Game Preserve.

“The Kordofan here are slightly lighter in color, but being younger than the generic aoudad factors in,” Shea said. “Plus, all of our generic aoudad are males, so they are grungier animals that roll in the mud and will be rough with each other. The Kordofans don’t have that bachelor herd mentality, so they are simply going to be cleaner (and more photogenic) animals.

“Kordofan noses are slightly longer, their eyes are a little farther apart, and they have a blonder beard. Our Kordofan aoudad are younger than our generic aoudad males, so they may (exhibit) more agility. With all that being said, it’s not super obvious to pick up on the difference between generic and Kordofan.”

Shea talked about how the Kordofan herd is doing and why they came to Fossil Rim in the first place.

“I think our Kordofans have settled in,” she said. “It’s a smaller herd that will take time to build up, depending on the number of males and females, plus the ones we bring in from other facilities.

“So, we decided to castrate our generic males. We kept them here in hopes they would show the Kordofan the lay of the land. Obviously, they’ll be interested in similar terrain in the pasture.”

Even as they prefer the same rocky areas, the pasture is pretty large and so guests will probably see the generic aoudad in a separate location from the Kordofans on most visits.

“There is a big generic ram that hangs out with the Kordofan ram, but the Kordofan females and lambs keep to themselves,” Shea said. “The Kordofan ram will return to them periodically. From time to time, they’ll all come together.”

Becoming Kordofan Aoudad Program Leader for the AZA was a big step forward in Shea’s career.

“I liked aoudad prior to becoming program leader, but I didn’t know much about them back then,” Shea said. “You become more invested in something when it is required and the desire to learn more increases. I’d worked a lot with sheep and domestic goats, so it was cool to get this opportunity and see how some of the care for wild and domestic species carries over. I go to more meetings, I communicate with more people and network more as a program leader.

“It’s made me more involved with AZA. Now, I’m also on the Caprid TAG (Taxon Advisory Group) Steering Committee, so I help field questions on all caprids within AZA and all of us in the TAG share advice to make decisions on caprid management (under the organizational umbrella). These opportunities have helped me grow a lot in my career development.

“Similarly, I grew into my role as a senior animal care specialist over the years at Fossil Rim. I learned so much on the animal care team for five years, went to conferences, met more people, and wanted to become more involved, so all of this is a natural progression of pursuing goals I set.”

The next time you visit Fossil Rim and enter the Game Preserve, keep an eye out for these bearded creatures with thick horns and note how different they look from all other Fossil Rim animals.

“I just hope people who visit Fossil Rim appreciate that we only have two caprid subspecies here with the two varieties of aoudad,” Shea said. “They are different from the rest of our hoofstock with unique features. Also remember that there is a conservation need for the Kordofan aoudad and we are working to help their population.”