If you’ve ever driven your vehicle through Fossil Rim or taken a Safari Tour, odds are you saw some of our seven southern white rhinos.

You might not have realized that we also have four southern black rhinos, all of which live in the Jim Jackson Intensive Management Area (IMA) that can only be visited on a Behind-the-Scenes Tour.

Tim Lloyd and Justin Smith, who both carry the title of Animal Care Specialist – Hoofstock, took some time to discuss all sorts of matters related to Fossil Rim’s lesser-known, but equally awesome, rhinos.

“The IMA is a better fit for the black rhinos because they are naturally a more isolated, solitary animal that doesn’t seek out companionship as much,” Lloyd said. “You’ll find them in smaller groups than whites when they are actually together. There is less traffic back here in this part of the facility, which is good because it takes less to stress out a black rhino.”

Lloyd pointed out some other major differences between black and white rhinos.

“Black rhinos have a prehensile upper lip,” he said. “They are browsers, so the design of their lip is very helpful for grabbing leaves and branches. Their necks are not nearly as bulky because they need more range of movement to be able to grab food above their head level, as opposed to white rhinos that are grazing with a sweeping motion of their mouth at ground level.”

Smith mentioned that black rhinos are significantly smaller. A male white rhino can reach 6,000 pounds, while a male black rhino usually maxes out around 3,100 pounds.

What do the black rhinos at Fossil Rim eat?

“Taking into account all four of them over one week, they are getting 560 pounds of coastal hay, 322 pounds of pellets, 182 pounds of alfalfa, and 400 pounds of browse,” Lloyd said. “All four get a pretty similar amount. Trees we use for browse are mainly live oak, elbow bush, sumac, and mesquite. Usually, the leaves and small limbs have the most tannin potential, so those are the parts of the trees we target.”

Unlike white rhinos, black rhinos have an issue with storing too much iron that the staff must be mindful of. The tannins in browse play an important role in binding iron and decreasing absorption by rhinos.

“Most zoological facilities that have black rhinos do some sort of dietary restriction on iron intake,” Smith said. “A great example here is instead of giving them a trace mineral block with some iron, we only give them a salt block. Alfalfa tends to be higher in iron than grass hay, so we are careful not to give them too much. We also have a water filtration system that removes most of the iron from their well water.

“Overall, the key is good management of what they consume. Giving them plenty of browse is great for them and we are fortunate to have the trees to provide them the quantity that we do.

“Black rhinos never developed a proper mechanism to process excess iron. It’s not as much of an issue in the wild.”

Let’s learn more about each one of Fossil Rim’s black rhinos.

“Uhuru” the breeding bull is 19 years old. He was born at the Fort Worth Zoo and then lived at the Abilene Zoo before coming to Fossil Rim to take over breeding bull duties from “Kusamona.”

“Uhuru is one of our smaller black rhinos,” Lloyd said. “As far as body condition, he’s lean. He has scars on his forehead from when he got into a tussle with ‘Salsa’ the first time they were placed together for a breeding attempt. 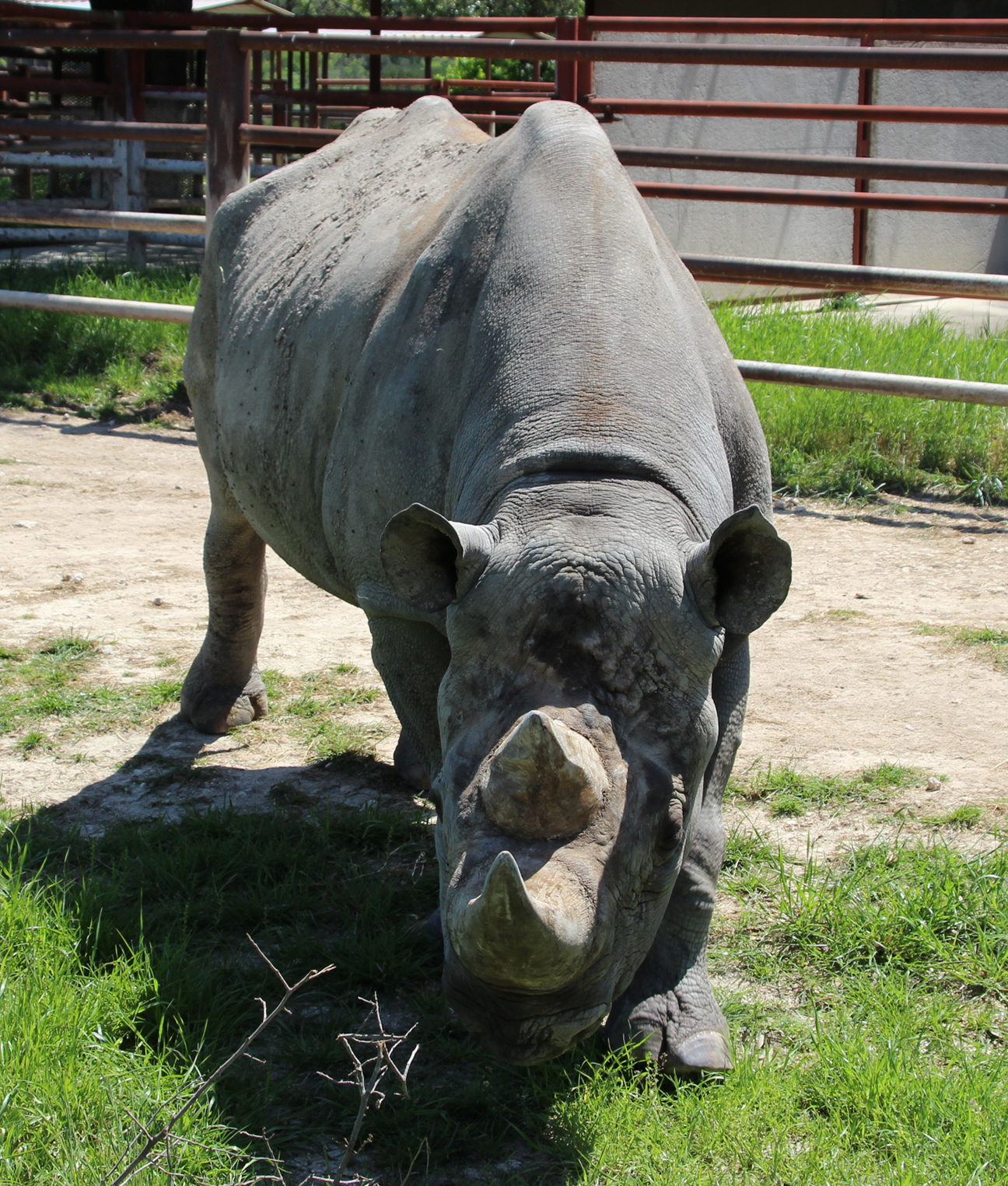 “He is generally laid-back, but has very good aim if he tries to spray you with urine. He was known for that at the Abilene Zoo.”

“Mupani” is 22 years old. She was born at Fossil Rim and is the daughter of “Coco.”

“Mupani is our largest black rhino and she’s well-conditioned,” Lloyd said. “Mupani is very food-motivated and loves attention. She can be a little aggressive at feeding time. 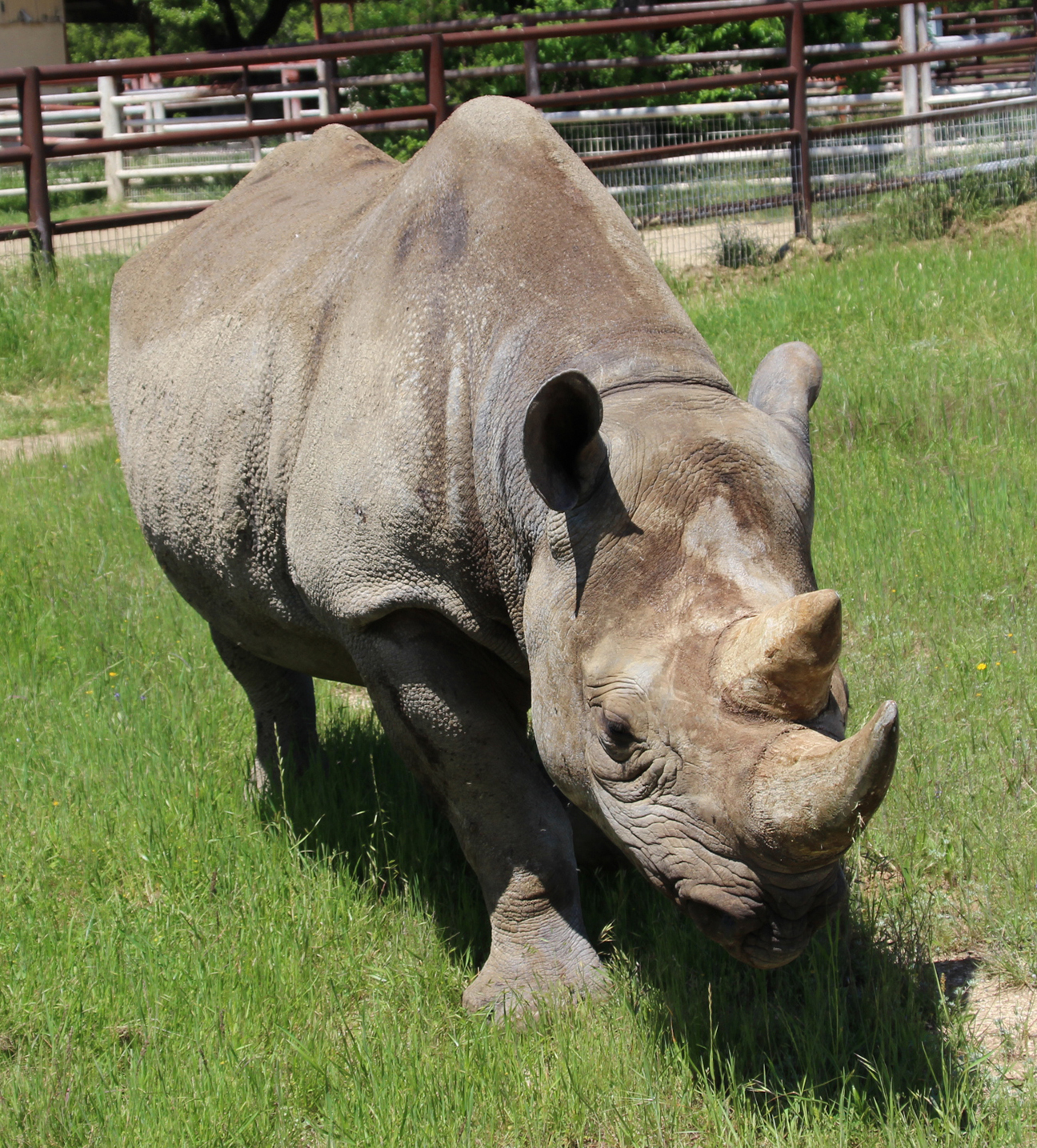 “Mupani has an odd growth at the bottom of her left ear that can be used as an identifier. She enjoys being in the barn more than the others. We have to encourage her go outside during the day, but we bring all the rhinos into the barn at night.”

“Salsa” is 25 years old. She was born at El Coyote Ranch.

“Her father ‘Gota Gota’ used to be the breeding bull here,” Smith said. “She went to the Fort Worth Zoo, but didn’t adjust well to living there and then came to Fossil Rim. She is a half-sister of Mupani.” 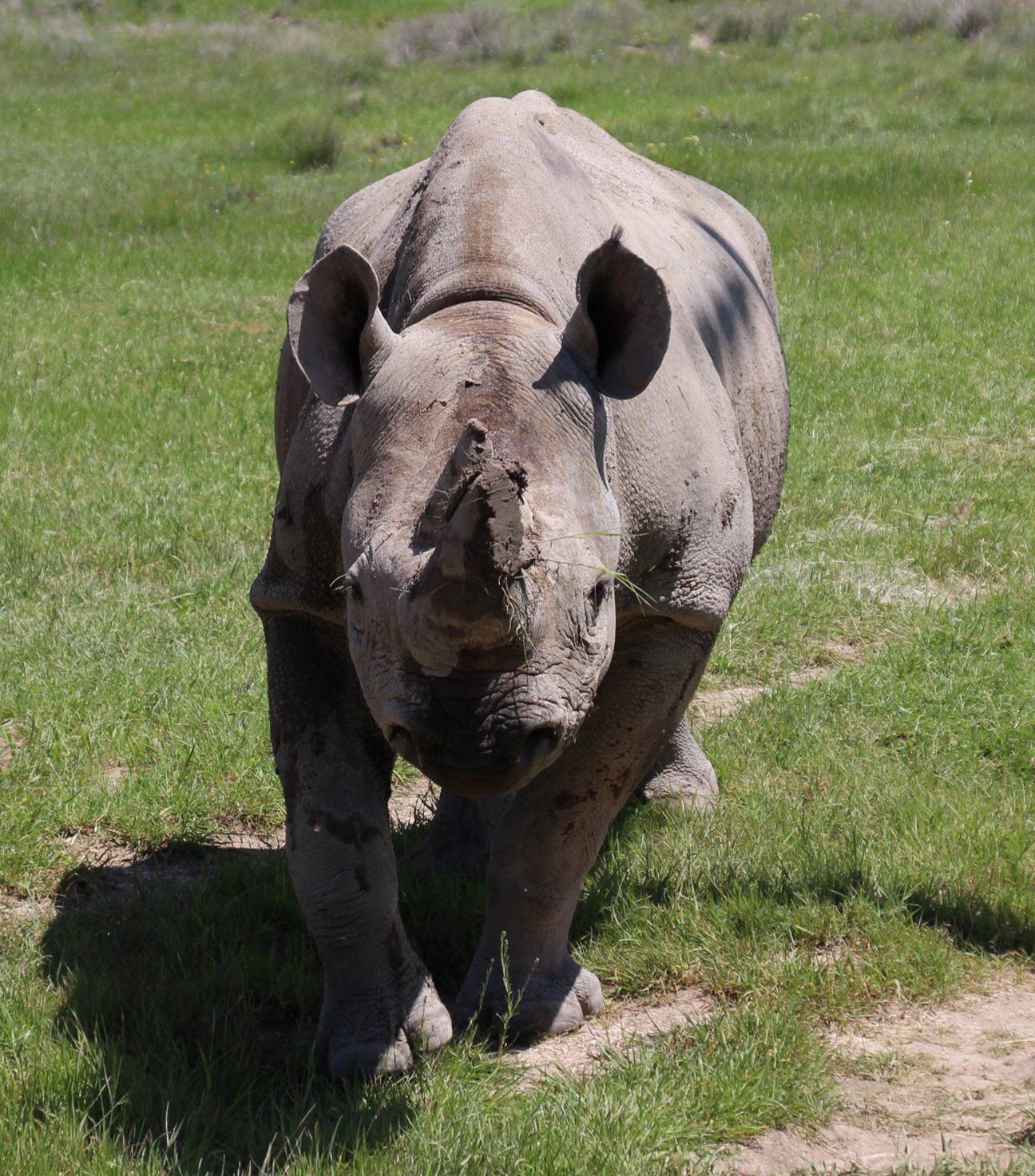 “Salsa is the smallest female and she has a lean build,” Lloyd said. “Salsa is relaxed, seems happy to be solitary, and is good at training. She will often go meet tour groups when they drive by the back of the fence line on Behind-the-Scenes Tours.”

“Coco” is 30 years old. She was born in Zimbabwe and came to El Coyote Ranch before arriving at Fossil Rim.

“Coco is shorter than the other rhinos due to her short legs,” Smith said. “The tip of her left ear folds over.” 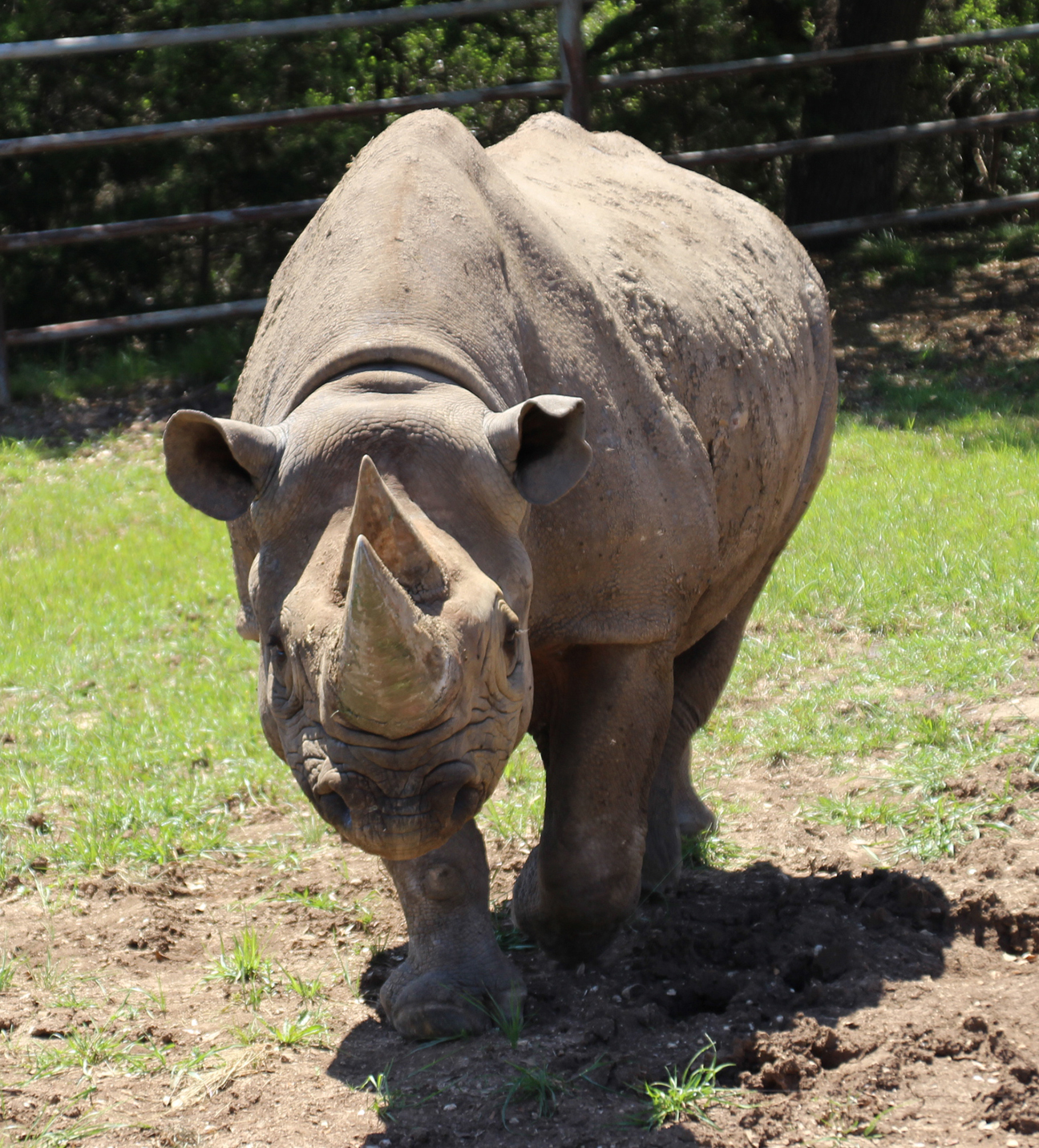 “Coco really enjoys her yard,” Lloyd added. “Some days she’s cautious about the staff approaching, but then the next day she wants your attention.”

While he can visually tell the black rhinos apart, there is an easier way.

“The easiest way to ID the black rhinos is based on what yard each one is in,” Lloyd said. “It’s not like the white rhinos where they are all together.”

Whereas two southern white rhinos were born at Fossil Rim in 2018 and another in 2016, the last black rhino was born in 2011. Coco has had four calves, but only one for Mupani and zero for Salsa.

“It is harder to breed black rhinos in captivity because they don’t hang out in groups,” Lloyd said. “You aren’t just going to put the bull out with all of the females at the same time to see if he breeds with one. We keep an eye on how the bull is reacting to the females, as well as what the females are doing. If we see identifiable breeding behavior or if a female is coming into heat, we’ll put the breeding bull with them.

“Uhuru is an unproven bull and Salsa is an unproven dam, while the other two females have calved before. It’s up to us to keep putting them in position to breed, and the black rhino intern is always watching them for any sign of breeding behavior. All of our females are now at least 20 years old, and their ability to conceive decreases with age.”

“Our black rhino intern does a lot of the daily primary work with them and checks on them throughout the day,” Lloyd said. “The intern is the person to get a look at them to begin the day. Then, when an animal care specialist gets here, we can get a preliminary report. If anything is out of the ordinary, we are notified immediately.

“The intern gives them browse and other feed. The animal care specialists help clean the barn and feed them, as well. I work with the intern on cleaning the middens (dung piles) once a week in their yards.”

There are six yards at the black rhino area to accommodate the four rhinos.

“Each of the yards is just under one acre,” Lloyd said. “Generally, they each share a fence line with at least one other rhino, especially when we are trying to see breeding behavior from the bull. They all know the others are there through smell and sound, plus they are all near each other when everyone goes in the barn. They are all used to each other.”

Returning to the theme of differences among rhino species, white rhinos have a population classification of “Near Threatened” while black rhinos are classified as “Critically Endangered.”

“Black rhinos face a lot of poaching threats in the wild, as other rhino species do,” Lloyd said. “They also face a decrease of inhabitable land in their native range. As browsers instead of grazers, they have a more specific diet they are targeting, which restricts the land suitable for them.

“Fragmentation of the population is an issue, since it is harder to get breeding rhinos around each other as solitary animals. With a 15-month gestation period, it is a very slow turnaround to produce new black rhinos.”

Keep a visit to the southern black rhinos in mind via a Behind-The-Scenes Tour.

“Especially during the summertime when the weather is nice (other than the midday heat), the black rhinos like being outside and a Behind-the-Scenes Tour is a good idea,” Lloyd said. “They are interesting to observe and sometimes they come up close to the fence.”