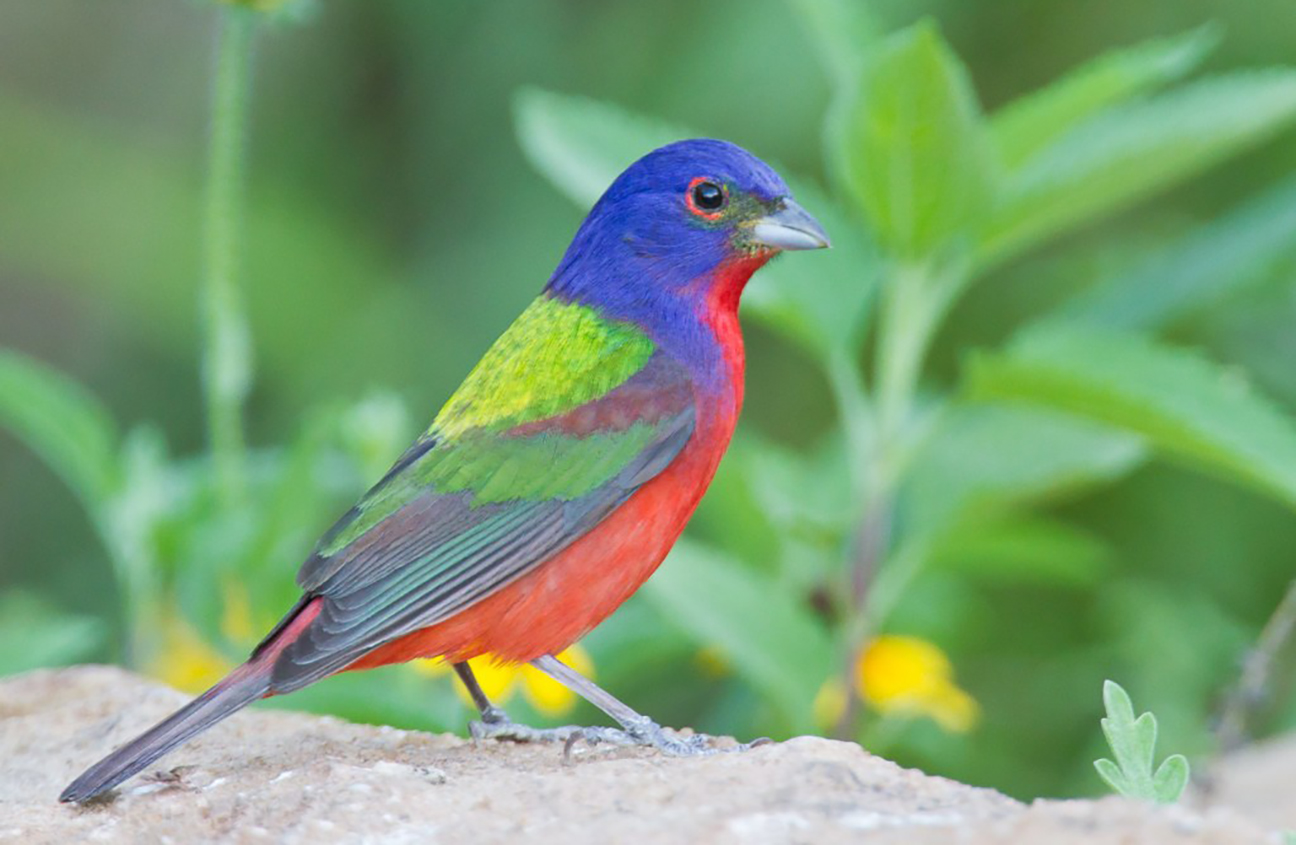 This occasion honors the birth of John James Audubon. He was a French-American ornithologist, naturalist, and painter noted for his extensive studies of American birds and his detailed illustrations of the birds in their natural habitats.

Audubon’s greatest work was The Birds of America, which is considered one of the finest ornithological works ever completed. His work in this book contains more than 700 North American bird species with 435 hand-colored, life-size prints of 497 bird species. In related news, the website https://www.audubon.org/ is a great destination for bird enthusiasts.

For this blog, we are going to take a look at five songbirds that can be found in the Fossil Rim area.

The golden-cheeked warbler, an endangered Texas native, nests in Central Texas Ashe juniper and oak woodlands, as well as streamside trees. They use long strips of juniper bark and spider webs to build their nests. The primary threats to this bird are loss of habitat and heavy parasitism of nests by cowbirds, which lay their own eggs in the nests.

The golden-cheeked warbler returns to this area each year in late March, as males can be found singing from the tops of junipers. Most commonly, they eat insects in juniper foliage, but will also go after caterpillars, moths, and cicadas, among other insects. In August, they usually head to the mountains of eastern Mexico.

The black-capped vireo is another bird in the area that has undergone adversity, and it often nests in the shin oaks at Fossil Rim. Currently with a conservation status of “Vulnerable,” it was an endangered species from 1987-2017. Its primary threats were also loss and degradation of habitat along with nest parasitism by cowbirds, but cooperative efforts by federal and state agencies and private landowners helped to reverse its decline.

The black-capped vireo usually returns to Texas each April, eating mostly insects and also some berries. In the summer, it focuses mostly on insects such as caterpillars, beetles, and grasshoppers. Males defend their territory by singing frequently through much of the breeding season. In September, it departs for the west coast of Mexico.

The northern mockingbird is the state bird of Texas. This species was often captured for sale as a pet in the 1800s, but it has a healthy population these days. This bird does not have as defined of a migration pattern as the previous species, and some do not migrate at all. Mockingbirds favor areas with dense, low shrubs and open ground, as well as woodland edges and farmland.

Northern mockingbirds mostly eat insects and berries. They focus heavily on insects in late spring and summer, but their overall diet for the year is about half berries and fruits, so they are more omnivorous than the previous species. The male sings to defend territory and attract a mate, often leaping a few feet in the air and flapping his wings while singing. The early stage of courtship involves the male and female chasing each other rapidly around his territory.

The male painted bunting is stunningly beautiful. This bird’s numbers have declined in recent decades, as it is another victim of nest parasitism by cowbirds, but it is also captured and kept as a cage bird on its wintering grounds in Mexico and Central America. The most herbivorous-leaning bird mentioned so far, it goes after seeds, berries, and fruits, but also eats a variety of insects – primarily in early summer – such as beetles, caterpillars, and grasshoppers.

To defend territory, the male sings from a raised perch, often partly hidden among foliage near the treetop. Males will also engage in serious physical fights, probably in disputes over territorial boundaries. One male may have more than one mate. Built by the female, the nest is an open cup woven of grass, weeds, and leaves lined with fine grass, rootlets, and animal hair.

Among all of the birds in this blog, the loggerhead shrike has the most direct ties to Fossil Rim. Fossil Rim is a member institution of Conservation Centers for Species Survival, which created its own Songbird Initiative in 2017. One of the seven species in its current songbird portfolio is the loggerhead shrike.

In 2017, “Shrike Force” founder and former Fossil Rim Director of Education Tessa Chenoa Ownbey was one of the presenters of the case for expanding the Shrike Force statewide at the Texas Master Naturalist Annual Meeting that October. Throughout most of Texas, the loggerhead shrike is present year-round.

The lone carnivorous bird in this blog, the shrike goes after large insects like grasshoppers and crickets, plus mice and other rodents, as well as small birds, spiders, snails, frogs, lizards, snakes, small fish, and more. Interestingly, the shrike often stores uneaten prey by impaling it on a thorn or barbed wire, returning to eat it later.

During courtship, the male performs short flight displays and feeds the female. These birds nest in a dense, often thorny, tree or shrub. The nest is a solidly constructed but bulky cup of twigs, grass, weeds, and strips of bark lined with softer materials such as rootlets, animal hear, feathers, and plant down.

When you visit Fossil Rim, keep your eyes peeled for these awesome bird species. They will almost certainly be harder to spot than a giraffe or rhino, but for an animal lover the search can be the best part.