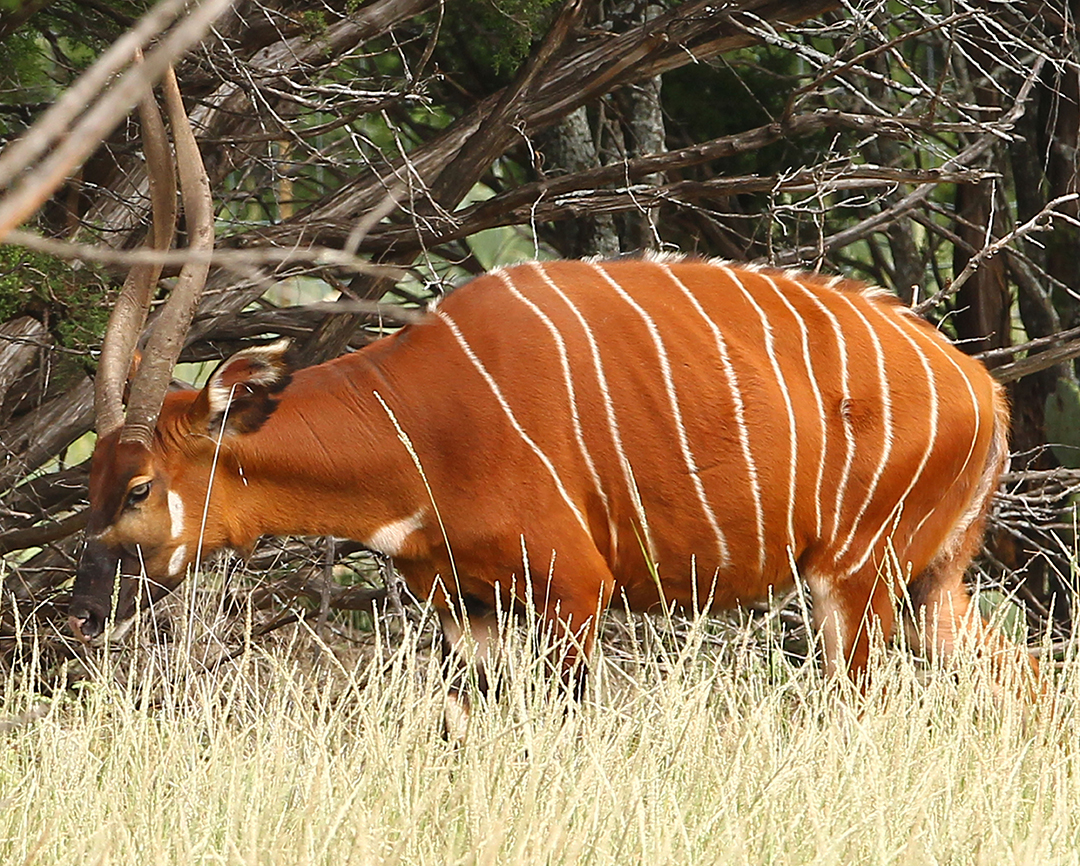 Most people will tell you that mountain bongo antelope are among the most beautiful species at Fossil Rim.

Depending on the time of day that you visit, you may have to take their word for it because this antelope is also one of the most difficult species to view at the facility. But, before we focus on Fossil Rim’s mountain bongo, let’s take a look at this species in its native Africa.

Among African forest antelope, bongo are the largest, heaviest, and most colorful. They are found in rainforests with dense undergrowth across tropical Africa. Two subspecies are currently recognized, the mountain (or eastern) bongo and the lowland (or western) bongo. Mountain bongo, the subspecies housed at Fossil Rim, are critically endangered and found in the Congo Basin of the Central African Republic, as well as in Kenya.

Compared to most antelope species, bongo have minimal secretory glands on the skin, indicating they likely use scent less frequently as a means of communication. Males tend to be solitary and two males of similar size will usually try to avoid each other. When they do come into conflict, ritualized sparring is more common and serious fights are rare.

Adult males typically only seek out females for breeding purposes. Females, on the other hand, often form small herds of up to 10 animals and may stay together for long periods of time.

At Fossil Rim, for guests who enter the park from the Admission Center, the critically endangered mountain bongo in the Buffer Pasture will be the second endangered species guests potentially encounter after the scimitar-horned oryx of the Front Pasture.

“We value all of the animals here, but I think it’s particularly important for a guest to be aware of the endangered species,” said Ben Jernigan, Animal Care Specialist – Hoofstock. “Hopefully, they realize that what they are seeing is special.”

The Buffer Pasture is Fossil Rim’s smallest pasture by far that is visited by the public. Jernigan sees its habitat as a good fit for the mountain bongo.

“It offers patches of trees for them to take cover into,” he said. “Given that they are a forest antelope, we don’t want them in too large of a pasture or it would be even more difficult for guests to see them, as they tend to disappear into the woods. This is why the Buffer Pasture is a great fit for them, as well as the greater kudu, another forest antelope that shares the Buffer Pasture with the bongo. This pasture allows these species to feel comfortable and have adequate habitat to hide in while still keeping them close enough for the public to be able to see, even if only at a distance.”

In 2017, the paved route of the Gosdin Scenic Drive shifted to go through the center of the Buffer Pasture. It used to curve over to the right beside the primary cluster of trees where the bongo prefer to stay most of each day. 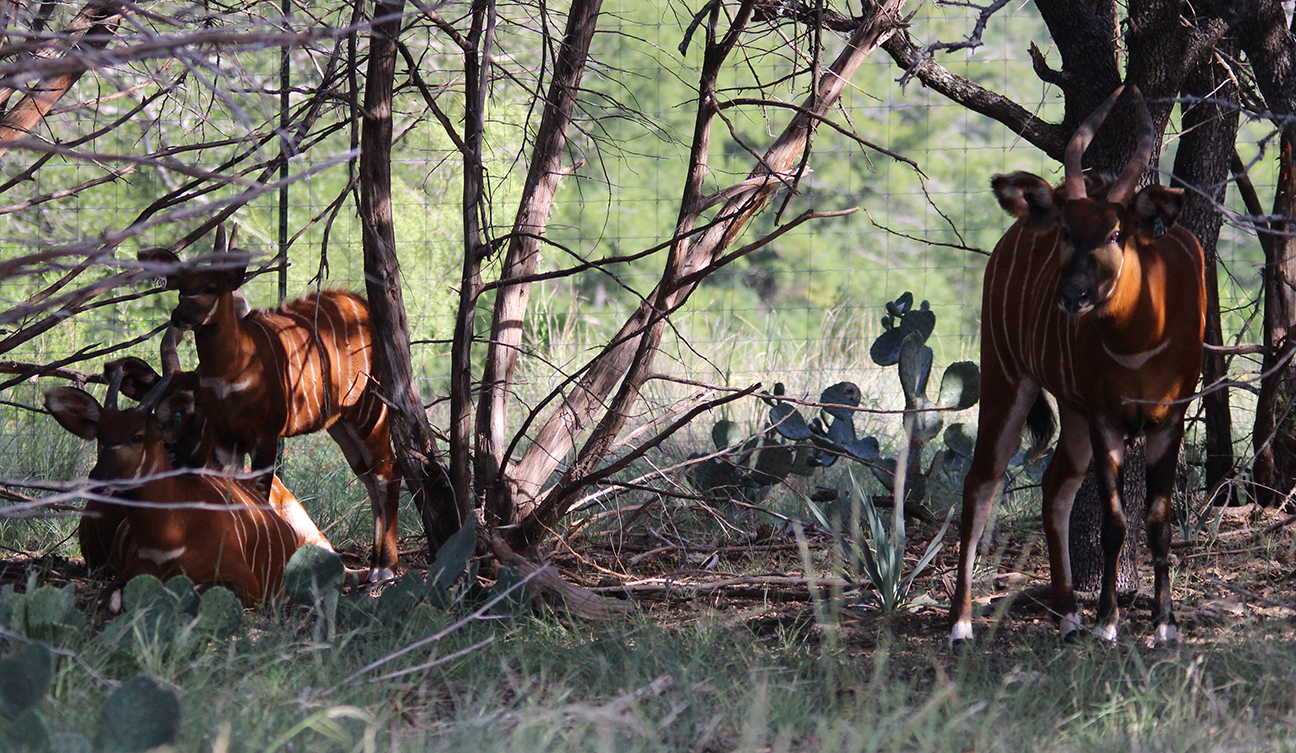 “The decision to shift the route to the center of the pasture definitely gives them the opportunity to retreat away from people if they choose to,” Jernigan said. “That way, they can always be calm and relaxed in the woods to avoid stress if needed. The old route went right beside the trees they preferred and may have been more stressful on a busy day of guest traffic.”

As far as behavior goes, the bongo share some characteristics with other well-known antelope at Fossil Rim.

“The bongo do really well at keeping a tight herd formation, which is something you see from several of our antelope species including the sable and the scimitar-horned oryx. With these species, there’s a dominant female in the group that determines where the herd goes and all the other females follow her lead.”

The bongo are at the top of the feeding hierarchy in the pasture, but that is more about a lack of competition for dominance than it is their imposing presence.

“With their skittish demeanor, if the bongo were placed with a more aggressive antelope in a different pasture, you’d likely see their control at feeding time change,” Jernigan said. 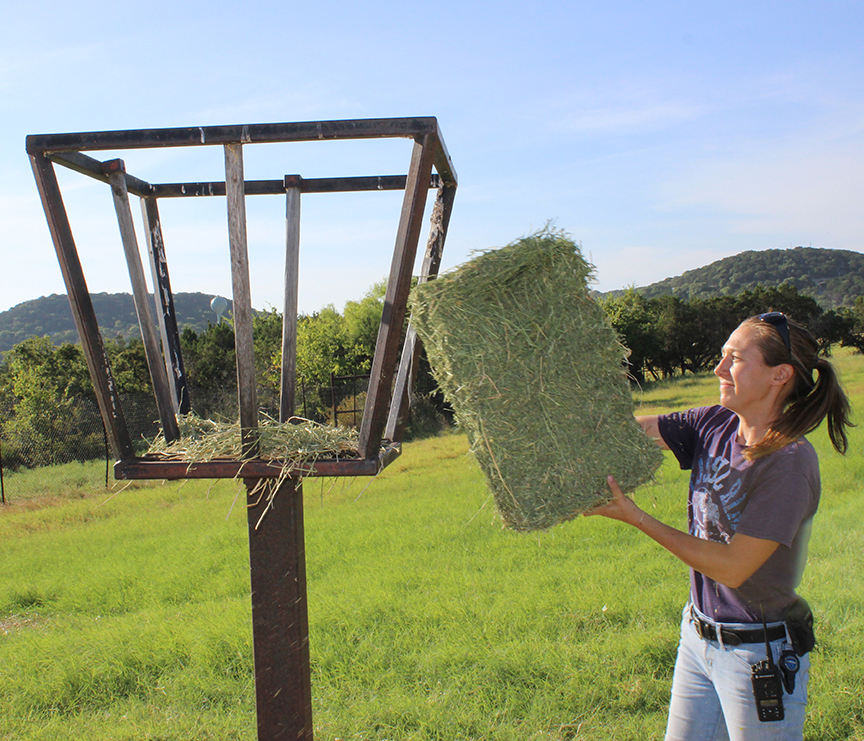 Each morning, the bongo receive a pelleted feed and alfalfa hay. As browsers, they do not focus on grasses as much as many antelope do.

“They get much of their nutrition from leaves and twigs, as opposed to our natural grazers, who are supplementing what we feed them with grass,” Jernigan said. “In regard to health concerns, the bongo generally don’t require anything beyond feeding, as far as medical care or other attention. They are pretty rugged animals.”

Although many Fossil Rim guests may not know much about mountain bongo, they are popular from an appearance standpoint. In fact, in a tournament based on Facebook poll voting this spring, the bongo finished fifth among all Fossil Rim species that were in the tournament – higher than any other antelope.

“Bongo are really unique in their appearance,” Jernigan said. “Compared to the build of most antelope, they are much stockier and their movement is more uneven and bobbing, as compared to the smooth walk you get from some antelope. In my opinion, addax, waterbuck, and sable generally tend to have more of smooth motion.”

The striking coppery-red coat with white stripes is one of the most distinguishing features of bongo. Females are usually more brightly colored, but may get paler with age, while males will get darker. Both genders have large, spiral-shaped horns.

“The bongo’s coat is cool – reddish with white stripes,” he said. “It actually is effective camouflage when they are among the trees in their native environment.”

Jernigan understands the bongo’s popularity, and he hopes it will spur people to keep learning more about the interesting-looking creatures.

“It’s great to be able to take care of my two favorite Fossil Rim species daily,” he said, also including the kudu. “I get to see their behaviors every morning, and they recognize my truck pulling up. Bongo and kudu are so unique, and being a woodland antelope sets them apart from most others. Among these two, their body types and colors are so different from one another.”

There are currently three bongo calves under one year of age and two yearlings at Fossil Rim.

“We make sure we see the calves daily,” Jernigan said. “They should be tucked away the first week or two after they are born. When you see them, you want to see a clean coat, which indicates mom is caring for them. I recently saw a bongo calf go up to a food trough and meet one of the kudu bulls, which was neat to see; the bull was not aggressive toward it.”

As is the case with so many endangered species, the work done for captive bongo populations is crucial.

“In their native range, human encroachment and hunting has taken a toll on the mountain bongo’s population to the point that they are critically endangered with only about 100 left in the wild, and most of those are mature adults,” he said. “So, having a breeding program for an insurance population with the potential goal of reintroduction someday is critical to the species’ survival.”

If the bongo are more difficult to see than most species at Fossil Rim, what would Jernigan recommend to give a guest his or her best chance?

“Your best chance to see the bongo specifically is in the mornings and evenings,” he said. “Morning for feedings and evenings for the cooler temperatures and then darkness. These are also good times to attempt to see the kudu. For tours, think about the Crack O’Dawn Tours and the Discovery After Dark Tours.

“If they aren’t out, you might need a pair of binoculars to see them in the woods. Take your time, look for a minute, and see if you can pick them out.

“Going slowly, maybe stopping, and looking around the entire pasture is more important in the Buffer Pasture than any other. I’m usually in the bongo area around 8:50-9:15 a.m., so if you want to see them and the kudu, I’d recommend driving by in that time frame.”