Staff Pulls Out All The Stops To Save Cheetah Cubs 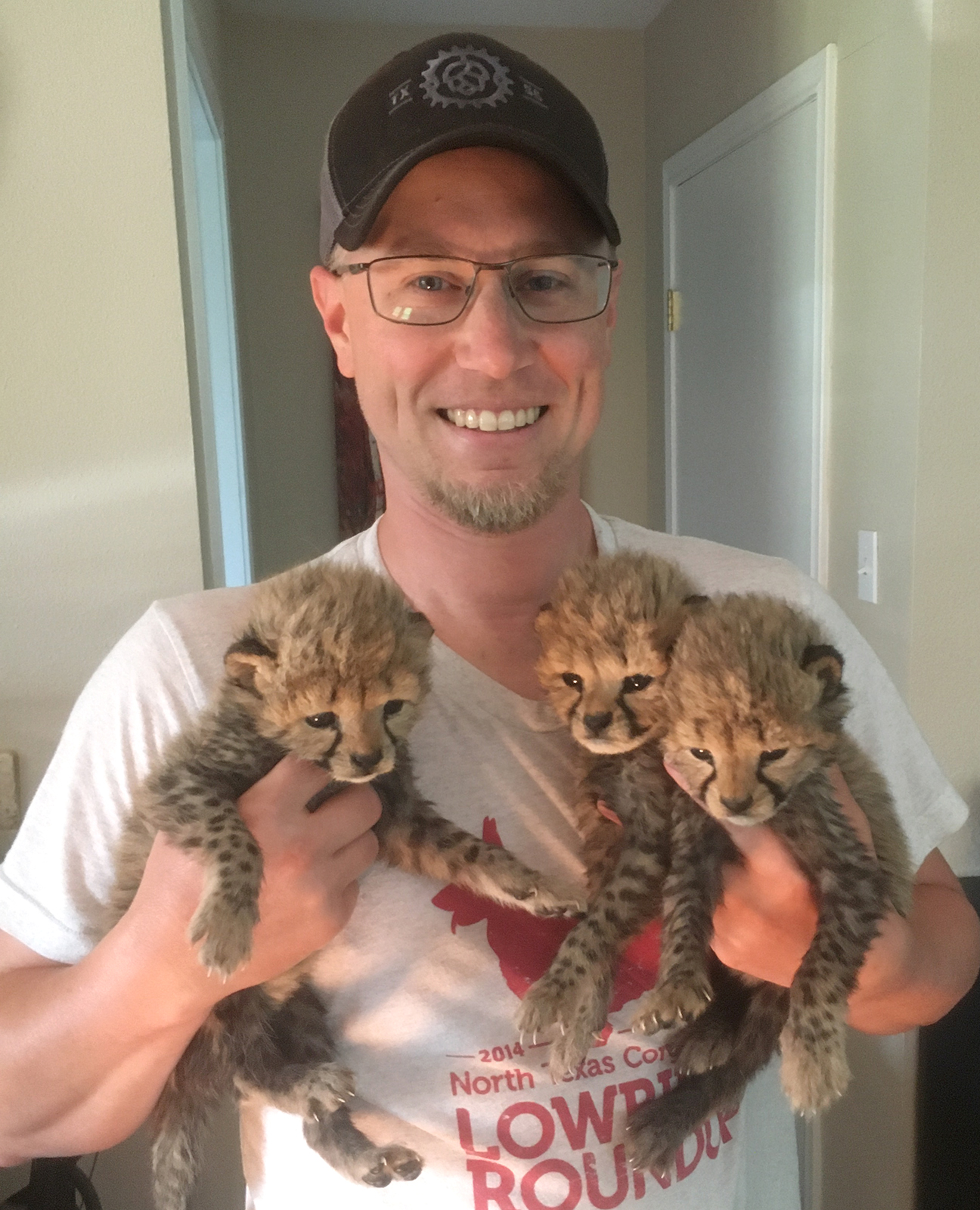 New cheetah moms can be nervous and are certainly busy, so taking a few days to get back to normal regarding eating is not unusual.

So, when five-year-old “Bria” ate normally for the first week after parturition (giving birth) on March 23, we were pretty excited.  While Bria had her paws full with five cubs, she was a relaxed and attentive mom, spending long hours nursing her cubs.

Her second week was not as smooth. Bria stopped eating well. She looked interested in food, but would only take occasional, small bites. Despite this, all five cubs had good weights and looked healthy when first handled by our carnivore team on April 2 when the opportunity to quickly check on them arose.

Cheetahs do like their quiet solitude and routines, so we interfere as little as possible with new litters. So, how do we know any details about Bria and her cubs? Remote cameras. In each den, and in the yards, there are several video cameras that allow monitoring from afar.

We also radiograph potentially pregnant cheetahs to confirm pregnancy during the third trimester and get a count of the number of cubs to expect, which helps improve our management of each birthing event.

Then, from our office or at home on our smartphones, we can watch and count as the cubs are born.

It’s exciting and adorable, but most importantly, the cameras are a key tool for knowing when medical care or other intervention is needed. Additionally, we are able to understand all the behaviors surrounding parturition and early cub rearing when things go well that we didn’t see before using cameras.

We see the cubs latched on the nipple and nursing.

We see Bria being an attentive and dedicated mom. We see Bria not drinking as much water as she should. And, we don’t see her coming out for the food we offer. We are getting concerned.

By 12 days post-parturition on April 4, her appetite showed no significant improvement. At this point, we are worried enough about Bria’s health to perform an exam under anesthesia. This is not a decision made lightly, as any interference could disrupt the bond between cubs and dam.

Carnivore Curator Jason Ahistus’s cheetah experience is vast; he has made the hard decision to pull cubs due to health concerns five times since 2014. His first experience with cheetah cubs was back in 2005 when, during his summer internship, we had to hand-rear two cubs due to illness in the dam and cubs. That summer sealed his fate. After helping to hand-rear the famous “Moose” and “Bruce,” he was hooked on the challenge that cheetahs are so good at providing.

Jason watches the camera feed on his phone, waiting for Bria to exit the den and leave the cubs for a few minutes. Once she does, we lock her away from the cubs and get her darted with immobilizing drugs. The cubs are bundled up and put into a warm incubator after getting weighed. They look good, but have lost some weight over the past two days.

At the vet clinic, we hook Bria up to monitoring equipment, take blood, radiograph her abdomen and chest, and perform a complete physical exam. She looks pretty good. Lab work is normal. Radiographs do show a stomach that looks full and that doesn’t fit with her history of not eating much, but there is no evidence of an intestinal blockage.

And with no history of vomiting, something typically seen with a gastrointestinal blockage, we see no reason not to get her back with the cubs as soon as possible. She is treated with fluids, two drugs to fight nausea and settle her stomach, plus antibiotics, and then she is woken up.

Once back on her feet, we return the cubs to her. She takes them and it isn’t long before they latch back onto her. Now, it is day-by-day to see if her appetite kicks back in and if the cubs gain weight.

By morning on April 7, it is clear the cubs are not gaining the weight they should. Bria still isn’t eating. We repeat the routine from Saturday morning: wait for Bria, the still-attentive mom, to come out of the den. She finally does at 12:30 p.m.

At this point, we have made and remade plans for all the different scenarios. If Bria needs surgery, she won’t be able to take the cubs back, so we can hand-rear them. But, we sure don’t want to.

Fossil Rim knows how to do this, and even if we didn’t, we have colleagues at the other cheetah breeding centers with extensive hand-rearing expertise. Mom-reared cheetah cubs, well mom-reared anything, is the preferred method of bringing up babies. These animals are the most behaviorally normal, they get the right nutrition, and develop normally in social groups appropriate for their species.

Unfortunately, sometimes there are no other options. When we have to hand-rear an animal, we always try to make things as natural as possible. For example, we gave “Jiwe” the white rhino a goat friend and then a rhino auntie.

We raised an Arabian oryx calf that lived with an unrelated female and was bottle fed through the fence to limit her contact with people. With cheetahs, the next best thing to mom-raised, is foster mom-raised. Sometimes, there is another female with a similar-aged litter.

First things first, what is going on with Bria? Once at the clinic, we radiograph her stomach again, still somewhat full, and that isn’t right. We pass an endoscope into her stomach and among the bits of a tiny meal from April 5, we see a large mat of fur. This could be the problem!

Our vets consult with an internal medicine specialist via phone. When we radiograph her again, the insufflated air from the scoping nicely highlights the fur mat. Unfortunately, removal with endoscope alone is not possible. Surgery it is.

The vets make a long ventral abdominal incision so we can check on all her organs, even though we know where the problem lies. Once cleared, we focus on getting the stomach isolated; the surgeons are careful to limit any stomach contents from entering the abdominal cavity. Spillage could start a life-threatening infection.

They incise the stomach and handfuls of putrid meat and a large, dense mat of fur are carefully removed. Sew up the incision (yes, special suture pattern, two layers, don’t go through to the mucosa to expose sutures to gastric acid…yada, yada, lots of surgery vocabulary), change dirty gloves and equipment out, flush the abdomen, and then suture up the abdominal wall and skin. Piece of cake.

Next morning on April 8: Bria looks good, a bit gorked (high) on her pain medication, but eager to eat for the first time in a long time. Surprisingly, she is dripping milk from her teats. We had thought her milk production might be down with her poor appetite, and that was another reason we were concerned enough to examine her in the first place.

Maybe, just maybe….we roll the dice and put the cubs in the house near her in a whelping box so they can’t roam too far. If she would just take them back, now that she is eating again, we’d be extremely lucky. It is a long shot.

She is next to the whelping box and watching them.

But, she isn’t interested in nursing them. Maybe it’s the drugs, or maybe it has just been too long. We have to pull them for the night.

Determined to give her one more chance the following morning on April 9, we return the cubs and this time we try without the whelping box, hoping to encourage closer contact. She shows some motherly instincts and allows one cub to crawl up and latch on for a few seconds while she grooms it.

But the moment is gone, and she is up and walking away. Another glimmer of hope appears when she lies down next to three cubs and they move closer for a brief bout of grooming. But again, she walks away. And that was it for Bria. We have to pull the cubs to ensure their survival.

Bottle feeding several one-day-old cheetah cubs is sometimes a challenge. Getting 16- or 17-day-old cubs on the bottle is very unlikely. Moose and Bruce did well lapping up milk from a plate when they were pulled at two weeks old, so we try that, too.

Neither method is getting the cubs anywhere near enough calories, plus the cubs are weak and not suckling. We will keep trying, but in the meantime, the cubs also get tube fed to get them much-needed calories. At this point, they are about a week behind in their body weights. Each missed meal is a danger. Tube feeding is no fun, but it is tolerated well enough and is, most likely, lifesaving.

Phone calls are made. As one of the top producers of cheetah in North America, Fossil Rim is a member of the Breeding Centers Coalition (BCC), a group of 10 cheetah facilities that work cooperatively to share information and increase production for the AZA (Association of Zoos and Aquariums) Cheetah SSP (Species Survival Plan). Due to regular communications, we know what other litters are on the ground and how they are all doing.

This shared expertise and close communication is key to quickly moving cubs into a fostering opportunity. There is a cheetah at Wildlife Safari, another BCC member, with 12-day-old cubs. While five days younger than Bria’s, they are the same size at this point.

Teams from Wildlife Safari and Fossil Rim are picked, which include a veterinarian for the tube feedings that will keep the cubs fed on the nonstop trip from Texas to Oregon. But, the potential foster mom has four cubs already; she can’t take another five.

We split the litter. The two healthiest-looking cubs (the lone male of the litter and a female) pack their bags. We’re goin’ to Vegas, baby!

Las Vegas happens to be about halfway, so the exchange is planned for the following day, around midday on April 10. All of this happened fast and with help from others. While Jason talked logistics and planning with Wildlife Safari, vets gathered the needed equipment for feeding warm milk to cubs on the road in a car.

The SSP coordinator made calls to the Cheetah Sustainability Program and secured funding from this C2S2 (Conservation Centers for Species Survival) program to defray costs of the trip. By 7 p.m. on April 9, the same day we tried to return the cubs to Bria a second time, the two teams are on the road.

The trip goes well: one cub learns to drive, the other has a brief career as a Vegas showgirl, the handoff is made, and by late morning on April 11, the two foster cubs are plugged in with their new mom.

By the next day, April 12, through dogged determination (and lots of experience, innate animal sense, and tons of dedication to his job), Jason gets the now 19-day-old cubs that stayed at Fossil Rim to suckle from a bottle. An Easter miracle.

The rest is history. Well, yet to be written. There is some diarrhea, there is almost two weeks of growing to catch up on, and there are hours of hard work feeding these challenging cubs ahead.

The Fossil Rim cheetah program could definitely benefit from a helping hand during this time when the facility is not funded by tourism. To make a donation, CLICK HERE.