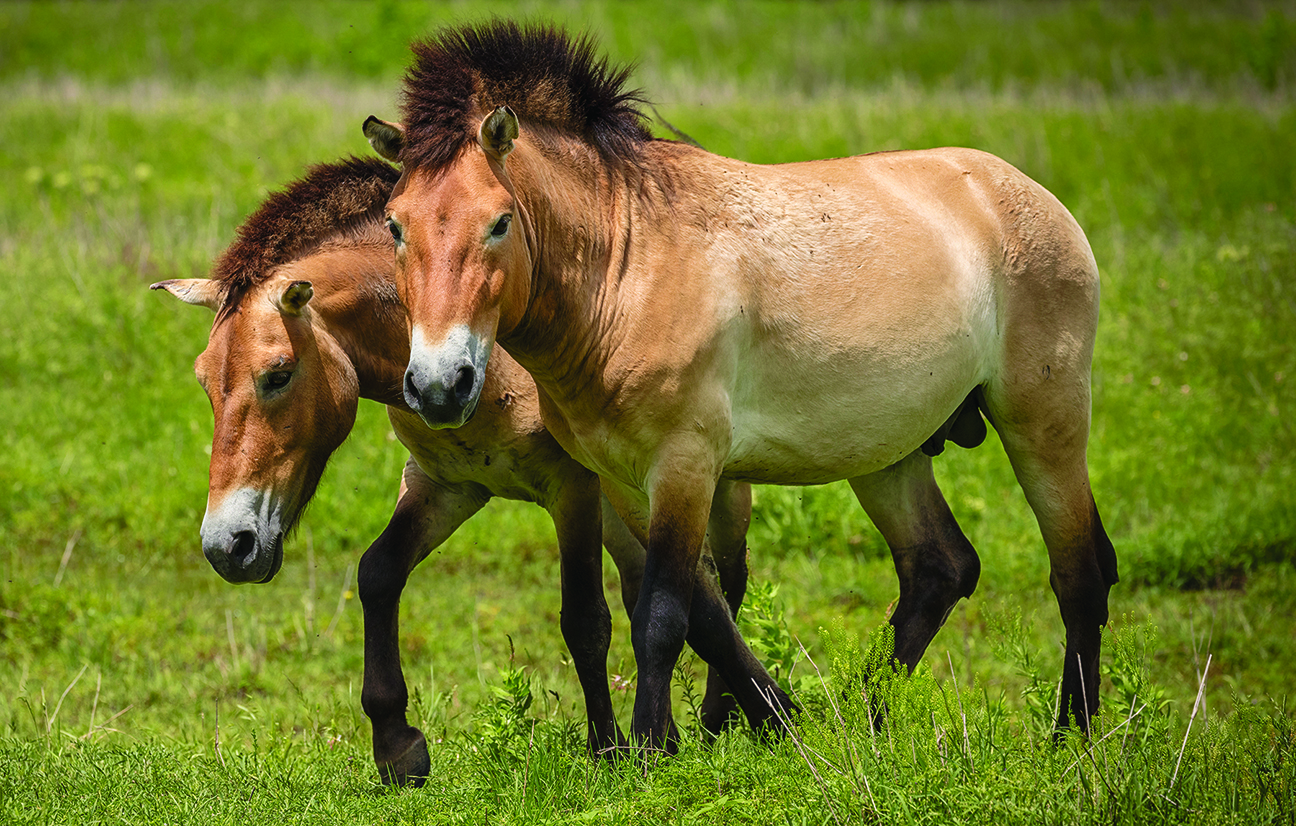 Popular with Fossil Rim fans on social media but rarely seen by visitors, endangered Przewalski’s horses are interesting for a multitude of reasons.

Becca McLachlan, Animal Care Specialist – Hoofstock, is one of the primary people to take care of the four Przewalski’s stallions. Not one to just talk them up for the purposes of an article, McLachlan really enjoys this species that is more commonly referred to as “P-horses” by Fossil Rim staff.

“I really like equids, and P-horses are a cool species,” she said. “All four of our current P-horses arrived in December 2018 from San Diego Zoo Safari Park. They had all lived together on and off previously.

“It’s nice having four, because the likelihood is that they split into two pairs. That definitely happened with this group, so nobody is completely alone.”

Before McLachlan takes us for a deep dive on the Fossil Rim stallions, let’s check out some general P-horse information.

Przewalski’s (“shuh-VOLL-skis”) horse was thought to be “the last true wild horse” and the only ancestor of the domestic horse alive today. However, scientists have discovered this horse is a descendant of one of the earliest-known groups of domesticated horses, called Botai horses, found in Northern Kazakhstan 5,500 years ago. The Przewalski’s horse actually has 66 chromosomes rather than the domestic horse’s 64.

The name “Przewalski’s horse” refers to Russian explorer Nikolai Przewalski, who first discovered the horse in the 1870s. Called “takhi” by the Mongolian people, the Przewalski’s horse seen today in zoos in North America and Europe is descended from 12 founders.

Declared “Extinct In The Wild” in 1969, reintroduction efforts are underway in Mongolia, China, and Kazakhstan. The world’s P-horse population is now approximately 2,000 and they have an increasing population trend. Their lifespan in captivity is roughly 20 years.

Fossil Rim does not have much East Asian representation, but P-horses do join endangered Japanese red-crowned cranes and Vietnamese pot-bellied pigs in that regard.

Many of Fossil Rim’s animal care staff members know their animals so well that they can differentiate them in great detail, which may be contrary to some guests looking at a herd and seeing many of the “same animals.” McLachlan’s detailed breakdown of the P-horse stallions is a perfect example.

“They all came with different notches in their ears, and that was how we told them apart when they first arrived,” she said. “Now, they all have different-colored ear tags after we sedated them for hoof trims. Ben (Jernigan, Animal Care Specialist – Hoofstock) and I could tell them apart anyway because we work with them every week and they look really different to us, but for other staff members, the ear tags are really helpful to have.”

She said Arslan and Jin are usually paired up.

“Arslan’s mane is super long and fluffy,” McLachlan said. “He’s the biggest horse. Arslan likes to start drama and play fight. You could tell he wanted to be in charge.

“Jin is the smallest. He got picked on before they came to Fossil Rim, and he would have to be separated at times. He doesn’t seem to care about the drama; he just wants to be left alone to eat. Jin is the most skittish horse around staff.”

Meanwhile, Tegus and Dash are usually off doing their own thing.

“Those two are the closest; they are great buddies and always together,” McLachlan said. “These days, they are generally mild-mannered and go with the flow. Dash has a really orange face and was atop the hierarchy before they came here, so he arrived with no nicks or marks on him.”

As she explains it, the hierarchy has definitely shifted.

“Jin is always fourth, but the other three have done some shuffling and jockeying for position,” she said. “Arslan has recently taken the number-one spot – he doesn’t let Tegus and Dash in the P-Horse Catch Yard – and Jin is kind of along for the ride with Arslan. Dash used to be in charge, but he was a more democratic leader and we joke that Arslan is a tyrant.

“Arslan tends to initiate conflict or play fighting with Tegus. Dash will step in to support Tegus if it gets too intense.

“That’s why we have spread out the feeders for their morning pellets. It looks pretty rough when they get into it, but we haven’t had any serious injuries. They are really hearty, tough animals; we don’t worry about them in the winter because they are native to Mongolia and love the cold weather.”

In addition to the P-Horse Catch Yard she mentioned, which is a small area, these horses roam the 10-acre Terrace Pasture. To put it into perspective, the White Rhino Yard many guests are familiar with is nearly 10 acres.

She was asked about nutrition and temperament while including the Grevy’s zebras and Hartmann’s mountain zebras to see if there were any differences among the Fossil Rim equids.

“All of our equids get 14 percent pellets since they are lower in protein,” McLachlan said. “They never get 17 percent to avoid hooves growing too fast. They all also get free-choice grass and round (coastal hay) bales.

“Grevy’s are generally known for being aggressive, but all of our equids show a similar, low level of aggression to us during feeding. None of our equids have been outright aggressive toward me except for Grevy’s zebra stallions. The P-horses definitely fight the most among themselves.

“The Hartmann’s also chase, bite, and kick each other a fair amount. I never see the Grevy’s females get into it with each other – nothing more than some ear pinning around feeding time.”

When feeding the P-horses, what else is McLachlan trying to accomplish?

“I’m doing an overall body scan,” she said. “Does anyone have a fresh bite wound, have they been kicked? How are they walking – is anyone limping? Any cracks in hooves or are any hooves overgrown?

“You hope to see them alert and interested in food. We also collect fecal samples a couple of times per year and the animal health staff checks for parasites or other issues.”

When Fossil Rim only has one gender of a species, the question of why sometimes arises on social media.

“We are a holding facility for males with these four stallions,” McLachlan said. “That’s beneficial to other facilities that are breeding P-horses, because we free up some space for them. One stallion can breed 20-30 females for a couple of years, so there will always be young males that get pushed out of that herd by the dominant stallion. They need to go somewhere.

“If we had a couple of females, we definitely couldn’t keep four males in one pasture. All four of them are genetically valuable, so most likely at least one of them will get the call at some point to head off to another facility to breed. The Przewalski’s Horse SSP (Species Survival Plan) Coordinator makes those decisions.”

Why are the Przewalski’s horses and Grevy’s zebras in their own private pastures?

“The Grevy’s used to be in a public pasture, but they were moved into their own pasture after showing aggression,” she said. “We don’t have a good public pasture spot for the P-horses. In Main Pasture, they’d have fence contact with the Hartmann’s stallion. Buffer Pasture is too small. We have a good dynamic with all of our herds in their respective pastures and mixing in four stallions that might easily show aggression to other animals could jeopardize that.”

When a species is in a pasture of its own, what are some of the benefits?

“They don’t feel competition for resources or territory with other species,” McLachlan said. “It’s quiet back here with limited human contact, which helps preserve wild behavior. These pastures are similar to the setting for the animals within the IMA (Jim Jackson Intensive Management Area) in many ways.

“Since there isn’t access to guest vehicles and a steady stream of feed pellets, these animals move around more. They’ll come get their pellets from us in the morning, and then spend the rest of the day grazing and moving across the Terrace Pasture, maybe go into the P-Horse Catch Yard.”

The only way for a guest to visit Przewalski’s horses or Grevy’s zebras is on an Adventure Tour, which is an option to consider when Fossil Rim fully reopens to the public. Adventure Tours last six hours, visit behind-the-scenes areas of Fossil Rim, feature time with an animal care specialist, include lunch at Foothills Safari Camp, and allow guests to select a focus species that will be emphasized.

“I’ve had lunch with guests on an Adventure Tour, and then taken them to see whatever they wanted,” McLachlan said. “Adventure Tours are cool, because you get to spend the whole day going behind the scenes with a specialized guide. From everything I’ve seen, those guests have a wonderful time. They get to see the full extent of the park, have lunch at Safari Camp with an animal care specialist who fills them in on the species they are interested in, learn about conservation efforts, get background information on specific animals and their personalities, and learn how we manage them.

“It’s an inside look at Fossil Rim. These P-horses are really cool and rarely seen, so they are great for an Adventure Tour.”