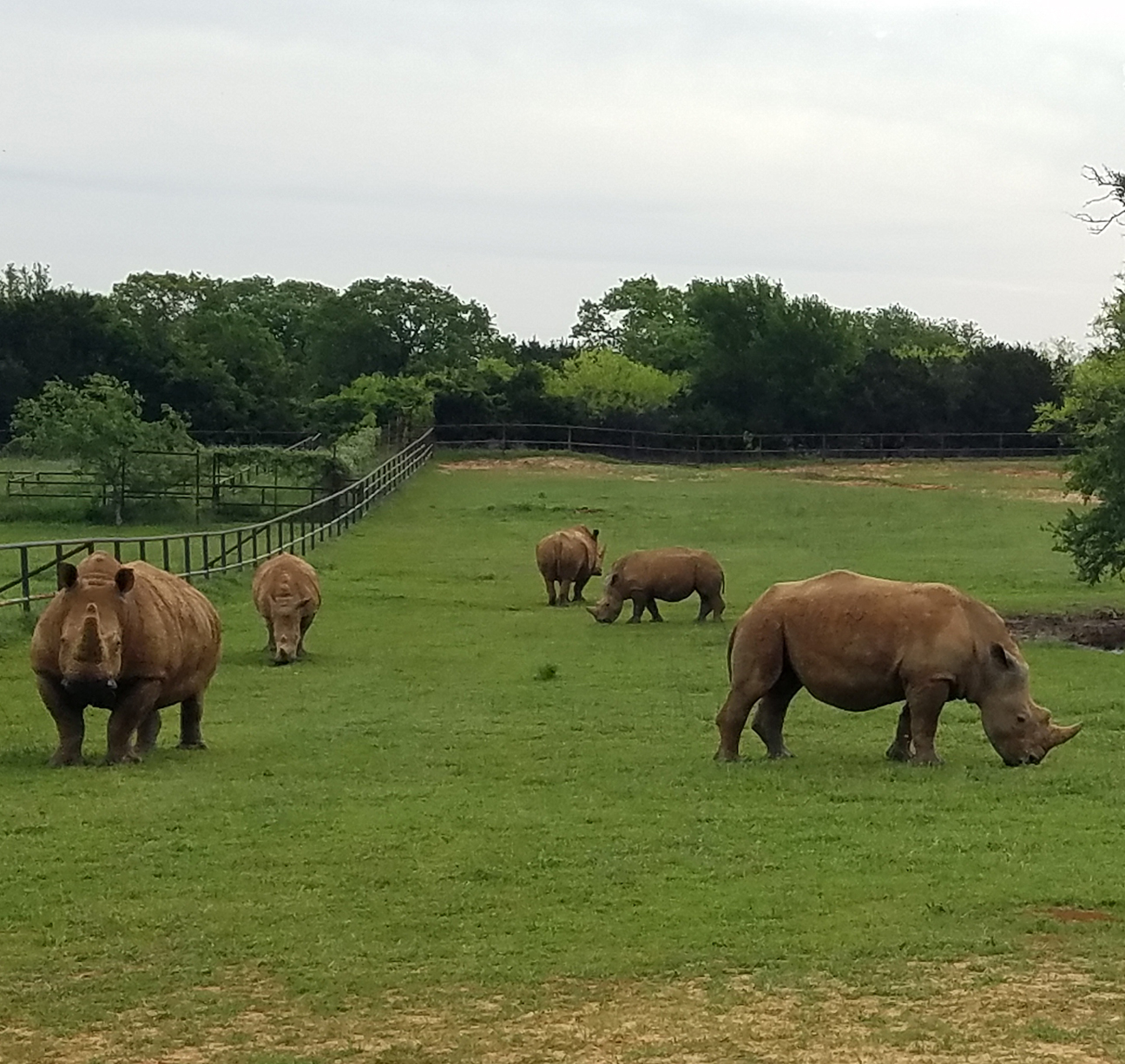 Every group of animals is made up of individuals, but some species are easier to find differentiation in than others.

For Fossil Rim’s southern white rhino crash, every rhino certainly has its own story to tell. Perhaps it is best if Justin Smith, Animal Care Specialist – Hoofstock, does the storytelling. Smith has been one of Fossil Rim’s primary rhino caretakers for seven years.

The fact that these rhinos are prominently featured in the Front Pasture along the Gosdin Scenic Drive makes them quite viewer-friendly, weather permitting.

“Southern white rhinos here at Fossil Rim are viewable for all guests,” Smith said. “It’s a great opportunity for guests to get to see them. Even though this species isn’t endangered, it is classified as ‘Near Threatened’ and these rhinos do need help. The poaching statistics on rhinos are definitely not slowing down.

“Currently, six of our eight white rhinos are together in the main yard, which is nearly 10 acres. They are doing what they would do together naturally, from a social aspect. It is interesting to see those natural behaviors.”

“M’Bili” turned 41 this year. A 1970s baby, albeit barely, no other white or black rhinos currently at Fossil Rim were even born until the 1990s. She was born at Lion Country Safari in Florida.

“She is starting to have some geriatric issues that you would expect with an older rhino; a white rhino’s life expectancy is 40-45 years,” Smith said. “Her horns are starting to curve inward like a crab claw. All in all, she’s still doing well. Two of her three calves still live at Fossil Rim – ‘Raka’ and ‘Xena.’

“M’Bili is very stern when she doesn’t like what another rhino is doing. She’ll let them know about it.”

“Bernard” will turn 30 this year. Born in the wild, Bernard was previously at ABQ BioPark Zoo (Albuquerque) and White Oak (Florida) before arriving at Fossil Rim.

“He is an experienced bull with 15 calves sired, three of those calves at Fossil Rim, so he’s definitely well-represented within the population,” Smith said. “He has a large frame and nice horns. He’s one of our two largest rhinos, along with Raka. In the wild, he would go from one group of females to the next looking for females in heat.

“But at Fossil Rim, we have a finite number of females and sometimes they’re pregnant or raising their calves. So, if the females don’t want to breed, it is normal for them to be standoffish toward him.”

Raka will turn 21 this year. M’Bili gave birth to her at Fossil Rim.

“She is by far our largest female,” Smith said. “Raka has a unique horn set; they both go straight out, as opposed to the natural curve you would expect to see in the wild. Raka has never had a calf or shown interest in breeding, but she is a good companion rhino.

“She gets along very well with ‘Jiwe.’ For such a large, powerful rhino, she’s easy-going.”

“Ursula” will turn nine this year. She was born to “Edith” at Fossil Rim.

“When Ursula was born, Edith was the oldest female white rhino to have calved in captivity,” Smith said. “I’ve seen her grow into an adult and she’s had two calves – Jiwe and ‘Blake.’

“She takes care of Blake, acts maternally, and protects him. She’s been a great mom the second time around.

“Her primary horn tilts slightly to her right. She’s a beautiful rhino that has probably the most ‘normal’ horns among all of our female rhinos.”

“Khari” will turn seven this year. He was born at ZooTampa at Lowry Park.

“He got a lot of attention from his animal care staff there before going to White Oak and then arriving at Fossil Rim,” Smith said. “Khari is significantly hairier than all of our other rhinos, which is especially evident when you look at his ears. You can see his hair without being close enough to touch him. He will be Fossil Rim’s next breeding bull since he is unrelated to all of our rhinos, including Xena.”

Jiwe will turn four this year. He was born to Ursula at Fossil Rim, but as a first-time mother she rejected Jiwe and the Fossil Rim staff needed to step in to care for him.

“Jiwe was hand-reared, which was a new endeavor for Fossil Rim,” Smith said. “Hopefully, we never have to repeat that. We were able to get him in with other rhinos early on, so we made it where he was dependent on rhino companionship, versus humans. Because of that, he has a healthy social orientation toward the rhinos.”

“Each feeding took about an hour of a staff member’s time,” Smith said. “One day, he will need to move to a different institution for genetic diversity, but I will always be interested in how he is doing. Rhino keepers across institutions talk frequently – people have often asked for updates on M’Bili, Bernard, and Khari.

“We never stop caring for the animals; we just care from afar. Jiwe is figuring out that he is a male and testing his boundaries, so we’ll continue to monitor all of his interactions closely.”

Xena turned two this year. She was born to M’Bili at Fossil Rim when the mother was 38 years old.

“Xena is a little more reserved in her behaviors now,” Smith said. “She’s definitely dependent upon M’Bili, but is starting to explore on her own here recently. We had to do some medical treatments on M’Bili that required those two to separate from the crash, but they are reunited now (as a group of six) and it will be interesting to see how the calves interact going forward. I expect she’ll return to being more outgoing now that she has rejoined this social dynamic, as opposed to only being with mom.”

Blake turned two this year. He was born to Ursula at Fossil Rim.

“He is rambunctious and enjoys sparring with Jiwe,” Smith said. “It’s all for play, considering Jiwe is nearly twice his size. Jiwe isn’t quite a full adult, but also doesn’t see himself as a calf like Blake.

“Blake is slightly larger than Xena, but from a distance it is very difficult to tell them apart. Blake has a little protrusion on the inside of his ear, which is an identifier up-close other than trying to go by genitalia.”

“Tim came to Fossil Rim as a black rhino intern in 2016,” Smith said. “He did an excellent job, and we have continued to work him into our routine since then. He came here with minimal rhino experience, and now he’s a very strong part of our rhino management team. He has nearly four years of experience, I have close to a decade, plus Adam, Arnulfo, and (Executive Director) Kelley (Snodgrass) each have over 30 years of rhino experience.”

All of the animals at Fossil Rim could use a helping hand rhino now, considering the park is only partially open to tourism in an effort to reduce the spread of COVID-19. However, no animals can EAT at Fossil Rim like the southern white rhinos.

“The white rhinos are going through two round bales of coastal hay per week in the White Rhino Yard,” Smith said. “We still feed them 8-9 square bales per week, too. They get 382 pounds of pellets per week.

“Every donation helps with feed, medication, and having the proper staff in place. We greatly appreciate your help.”