From One Spring To The Next: Cheetah Overview 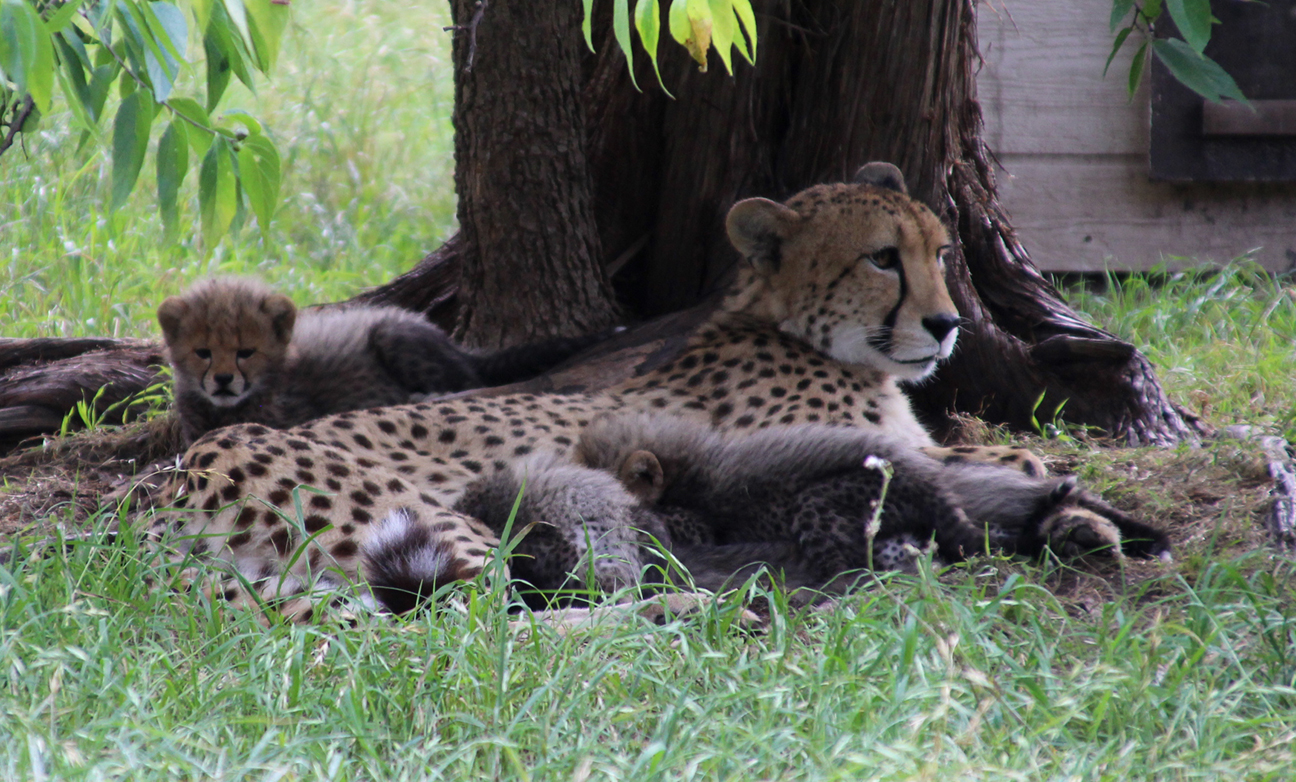 Spring 2019 brought a major milestone for Fossil Rim’s cheetah program, and the staff is hard at work to keep progressing forward.

Carnivore Curator Jason Ahistus took some time to discuss the past 12 months and how he is trying to navigate through these uncertain times.

“Things have been great for our cheetah program over the past year,” Ahistus said. “We had two litters last year and hopefully will have a couple more this year. Things are running smooth, and we are doing as well as can be expected during this time.”

“That was a great moment for this program when Charlie’s litter was born,” he said. “Two hundred cubs is a big milestone. We’re proud of it, and we will keep going – 300, here we come! That litter is doing great.

“They are currently in our five-acre yard (at the Jim Jackson Intensive Management Area – IMA) with their mom. They are out there exploring and will turn one year old on April 11. They will stay with their mom for at least another eight months.”

“We lost a really good staff member with the departure of Alex Sharkey, but added a new staff member in Jess Rector who is really picking up what she’s being taught, loving the cheetahs, and doing great,” Ahistus said. “I could not be happier with where Jess is at this point. Her overall demeanor is ideal. To be successful at breeding cheetahs, you have to be laid-back, relaxed, and not high-strung.

“Things change constantly with cheetahs, especially when you are managing a breeding situation or cubs. Being able to make frequent changes and not get stressed out by that has been a big help, because Jess has the same mindset I do in that regard. We work really well together and she takes everything day-by-day.”

In the midst of her eighth month on staff, Rector has already gained a lot of valuable experience.

“Having to deal with a cheetah, ‘Meadow,’ that broke her leg in December and then managing it in the months since has been invaluable experience,” Ahistus said. “It was a tricky surgery with a lot of recovery we are still dealing with the effects of. We have our new facility to manage the cat in, and as we work through the kinks, Jess has been here for all of that. It’s been an amazing learning opportunity.”

The cheetah staff has spent a lot of time in the vet clinic through all of the new casts Meadow has received. https://tinyurl.com/r3bpu95

“That was the first injury of that nature to a cheetah we’ve dealt with at Fossil Rim,” Ahistus said. “We had a cheetah break its leg a few years prior, but it was a different injury that healed in only two months. Our vet staff has a good plan and we will work through the challenges for Meadow as they come.”

As Rector wraps up her first year on staff, it sounds like she will have every opportunity to build upon her skillset.

“I’m excited for her to go through the whole breeding process of introducing cats and identifying the behaviors we are looking for,” Ahistus said. “I still learn that stuff on a daily basis. She’ll also learn about birthing, managing the cubs, and so much more over the next six months.”

As mentioned, Rector was previously a Fossil Rim intern. In fact, everyone in the carnivore department was along the way – Ahistus, Tessa Townsend, and Stephanie Davis.

“Our internship program is great,” Ahistus said. “It’s definitely one of the best in the country, as far as the level of experience you get. It jumpstarted my career and did the same for a lot of staff members. They are treated like a staff member and trained to do the job, given opportunities to learn and grow.

“It really sets people up to be able to perform a full-time job here. We know what they are made of, if they are capable of handing the job, and what skills they possess. If we have an open, full-time position, moving an intern into that spot makes the most sense and it has worked for us.”

The “new facility” Ahistus referred to earlier is a neonate yard built within the Robert B. Haas Family Cheetah Conservancy – aka “Cheetah Hill.” https://tinyurl.com/y646qzbu As Meadow’s situation has proven, it is more diverse than only being used for cub care.

“Since that yard was completed, Meadow’s recovery has been what we’ve used it for,” he said. “Her injury happened a couple of months afterwards. It has really helped us manage that situation. Without that yard, it would’ve been really difficult and a tougher experience for Meadow.

“We anticipate a couple more months in her recovery, but then we’ll be able to move her into a different area and have it available again. We built it to have a good spot to hand-raise cubs, but adding aspects during construction that made it a medical management area as well has already paid off. We can share those designs for that yard with other facilities if they ever need a versatile area like that to accommodate different management situations.”

Last fall, Ahistus traveled to another cheetah breeding center, Cincinnati Zoo, for the annual breeding and transfer plan meeting for the Cheetah Species Survival Plan (SSP). While there, he and Fossil Rim Director of Animal Health Dr. Holly Haefele served as instructors for a course about cheetah care. Ahistus helped coordinate and design the course curriculum.

“This past October, as part of the Breeding Centers Coalition, we created the first cheetah-specific husbandry course,” he said. “Fossil Rim was a key institution in putting that together. Holly and I were both instructors in that course. It helps share the wealth of knowledge the breeding centers have when it comes specifically to managing cheetahs with the rest of the zoo community.

“It helps increase and improve overall care for that species. We were proud to put it together and we look forward to continuing to hold the course and share what we’ve learned at the breeding centers with the rest of the cheetah community.”

In November, Ahistus was in Alabama to accept a recognition award entitled “ZAA Long-Term Commitment and Significant Propagation 2019” for efforts specifically regarding cheetahs. https://tinyurl.com/ssssgdh ZAA stands for Zoological Association of America.

“The award is great recognition for Fossil Rim and our efforts with the cheetah,” Ahistus said. “That’s over 30 years of commitment to a species with various people working in the program and passing on their expertise, from Kelley (Snodgrass), to Mary Jo (Stearns), to me, and now my staff. For Fossil Rim, it shows we have dedicated staff who want to do better and constantly try to learn and grow. It is a pretty cool award.”

In February, two cheetah cubs were born through in vitro fertilization and embryo transfer into a surrogate mother at Columbus Zoo and Aquarium – the first time this ever happened. Biologists from Smithsonian Conservation Biology Institute (SCBI) performed the embryo transfer, while the father of the cubs is three-year-old “Slash” from Fossil Rim. https://tinyurl.com/vykgcty

“The embryo transfer was huge for cheetahs and super-exciting when we found out it was successful,” Ahistus said. “Moving forward, it enables us to work with some of these non-breeding animals, such as ‘Slash,’ who did sire that litter. He has not shown an interest in breeding at Fossil Rim, but he’s still young, so that may change. Dr. Adrienne Crosier came here from SCBI and did sperm collection on seven of our males last spring; that was the collection from Slash that contributed to this procedure.

“There is still some sperm banked that could be used for other procedures, or possibly the same procedure, in the near future. Collection also gives us a good assessment of reproductive viability for the cats involved – are they producing viable sperm? If so, then when they are attempting to breed and not producing offspring, we can recognize there is potentially a different issue.

“The constant advancement of science really pays off. Past efforts at artificial insemination in cheetahs had produced little success, but the implementation of embryo transfer opens a new door. This technique could be used to inseminate wild females, as well as a tool in reintroduction of the species.”

Shifting cheetahs among different institutions is a valuable tool for genetic diversity, and unfortunately that is not an option currently as the nation tries to reduce the spread of COVID-19.

“Every year, we have a meeting for the Cheetah SSP to make breeding pairings that are good genetic matches,” Ahistus said. “We try to get the most genetically valuable animals in the captive population into the breeding centers, which is done through transfers. Without being able to transfer cats back and forth, it limits our success because we may not be able to set up breeding pairs. Right now during the pandemic, animal transfers are very difficult to complete for many reasons.

“Some facilities may not be able to breed at all, because they might need to send some cats elsewhere to create space to breed. We continue to communicate with all the breeding centers on a regular basis, not only about making genetic pairings and managing cheetah situations, but even how we are all managing this pandemic with staffing and other issues.

“We all share ideas and what each facility is doing. For example, at Fossil Rim we are limiting staff interaction – not riding in the same truck and working at different facilities or yards unless there are medical procedures we all need to attend. We are also wearing masks while in close proximity to others and disinfecting common touchpoints, such as door handles, locks, tools, etc.”

Taking a small-scale look at transfer of cheetahs, what about transferring cheetahs at Fossil Rim between Cheetah Hill and the IMA?

“Sometimes, it’s nice just to move them for the sake of having enrichment by being in a new area. They explore, scent mark, and are near different cats. It promotes a lot of their natural behavior.

“In the wild, they would be entering another cheetah’s territory and investigating scents. Having two separate facilities is great in case anything bad were to happen, such as a virus outbreak. Also, if we have cubs at one facility and are trying to keep it quiet, we can still continue our breeding attempts in the other facility and work on projects or other activities without having to worry about adding stress to a new mom.”

Most Fossil Rim guests know they can see cheetahs by driving by the Cheetah Hill facility in their own vehicle or while on a Safari Tour, but there is another option that goes much more in-depth – an Adventure Tour. Keep this in mind when Fossil Rim reopens to the public.

“When you book an Adventure Tour, you usually mention a species you want to focus on,” Ahistus said. “When someone says ‘cheetah,’ unless we have newborn cubs, people get to come in and get a Behind-the-Scenes Tour from me or my staff. Learn about our program and how we care for our collection, see our facility, learn how we manage the cheetahs for breeding, plus you get to see the cheetahs up close.”

Even though the influx of funding for Fossil Rim has largely ceased as tourism has come to a halt, the expenses remain.

“It costs $6-7 per day to feed each individual cheetah,” Ahistus said. “We also have costs associated with veterinary care. Any donation helps us greatly; it always has. Beyond covering the expenses of the cheetahs themselves, funding helps pay the animal care staff who are taking care of these animals on a daily basis no matter what is happening in the world.”