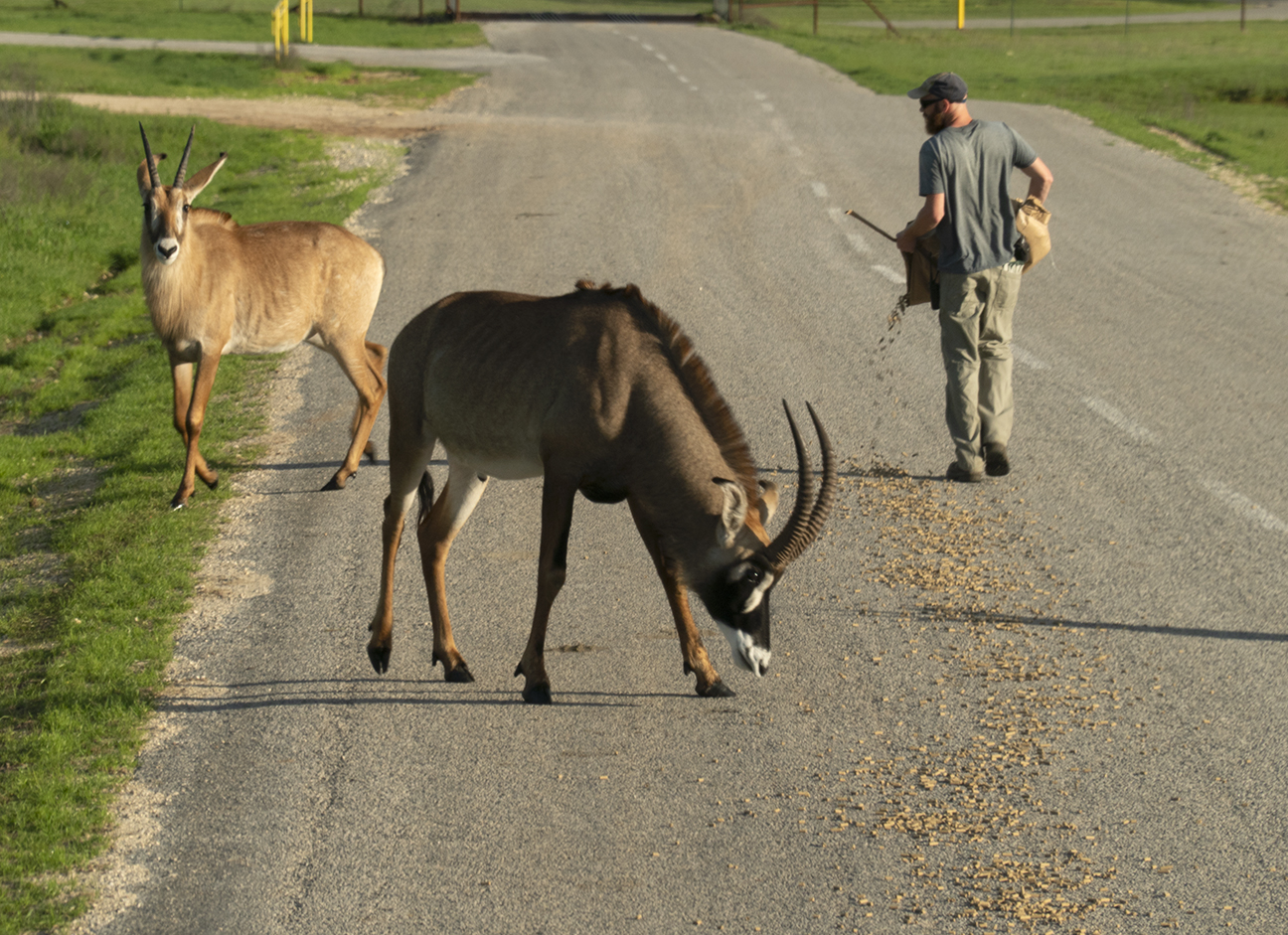 It is tough to beat Fossil Rim on a spring morning from approximately 8:30-9:30 a.m., as many of the species get their breakfast meal served by the animal care staff.

Ben Jernigan, Animal Care Specialist – Hoofstock, makes the morning feed rounds in the Front Pasture and Buffer Pasture. Gaining some Fossil Rim experience in the summer of 2015 as a Prairie Grouse Conservation Intern, Jernigan knew from memory that his animal care career began on October 23, 2017.

Speaking of preferences, mornings are his favored time of day at Fossil Rim.

“It is great to see all of the animals out running around and excited,” he said. “It’s an excellent opportunity to get a good look at them all and make sure they’re doing alright.”

When guests check in at the Admission Center and then head out on safari, they first journey through the Front Pasture. After feeding the American bison that live in their own pasture beside the Admission Center, Jernigan drove his truck into the park and explained the hierarchy of species in the Front Pasture, which becomes most noticeable when feed pellets are distributed at various spots on the paved road in the morning hours.

“If we are under the assumption that all the herds have the same amount of animals for the purposes of this question, I definitely think the roan (antelope) have the most (dominant) presence in the Front Pasture,” he said, considering rhinos are actually behind fencing in their yard. “Then, the scimitar-horned oryx and wildebeest after that. The scimitar are a little more aggressive about space and food than the wildebeest. Plus, among the two, they have the more intimidating horns.”

Jernigan explained that the roan are usually nice about sharing, but they definitely hold “their zone.”

“If an animal comes into their zone, or they adjust their zone, that’s when they start pushing animals off,” he said. “Sometimes, the wildebeest and roan occupy the same space and usually get along, but if you see aggression the reason is usually a food source. In terms of areas in the pasture, each species has its own favorite spots. The scimitar are generally off on the other side of the pasture doing their own thing.”

Further down the ladder after those three antelope species are blackbuck and ostriches.

“We generally try to spot feed the ostriches away from the other animals,” he said. “Ostrich 18 actually does a pretty decent job holding her position on a feed line, even around the wildebeest. Otherwise, the blackbuck and ostriches will get leftovers or little sections of pellets in spots the other animals aren’t occupying.”

White-tailed deer do not seem willing to challenge any of the exotic species when it comes to food.

“If you see white-tailed deer at Fossil Rim, it’s probably in the Front Pasture,” Jernigan said. “Generally, they won’t come to the feed line while these other species are there. Maybe if it is only blackbuck, then they’ll come up.”

Jernigan is able to comment on the hierarchy because of occasional conflict he has seen over time. After all, he makes an effort to feed in spots that mitigate conflict among species. Over the years, the animal care staff has determined the best ways to feed each pasture in order to keep fighting to a minimum.

“I’m trying to spread the feeding spots out to keep the species separated, so it is only occasional incidents that happen to give me an idea of how the hierarchy plays out,” he said. “The Front Pasture is large enough to feed the various herds far apart. The roan will show up at three different feeding spots, depending on the day, and the wildebeest often stay in two different groups, so they might show up at any of the first three spots. The scimitar and ostrich are most consistent about one feeding spot and, for both of them, that’s in the back part of this pasture (close to the Buffer Pasture fence line).”

Most of the animals understand the routine, which is why feeding time is usually peaceful.

“The animals know the spots where their species will usually be fed,” Jernigan said. “They also usually know the truck; they know the routine. The roan and scimitar always wait at their spots. The wildebeest will usually come over in a hurry after you feed their spot.”

The animals are focused on satisfying their morning hunger, but Jernigan is in evaluation mode during these feedings.

“You are going to get the most animals to come for morning feed compared to any other time, so it is the best time to get your counts for the herds,” he said. “I’m counting every animal, but I’m also taking a good look at every animal to make sure there’s nothing wrong with them. No limping, minor scrapes, or anything I need to report to the vet staff. If I have animals that are usually first to the feed line and they aren’t showing up on time, that’s going to require some more observation.

“Behavior is a good tell about how an animal is doing. Most animals are coming over at a pretty brisk pace, so if one has an injury it will be easier to tell at that point. You spend less time searching for animals when you pick a time that most of them are headed your way.”

While Jernigan has baled coastal hay in the bed of his truck in the morning, it is not destined for the Front or Buffer Pastures.

“Most of the hay in my truck is for the animals that are staying near the vet clinic, since I take care of them, too,” he said. “Generally, out in the Front Pasture, round bales are put out by Justin (Smith) and Tim (Lloyd), plus these animals have grazing opportunities. We appreciate those guys who take care of the rhinos helping our animals out with hay, as well. Usually, I’m just putting pellets down in Front Pasture.”

When would Jernigan make an adjustment to the spots he has been feeding morning after morning?

“Generally, I feed in the same spots each morning,” he said. “It may change based on the weather, like if we are getting a lot of rain. In that case, we may feed in sheds. If it’s muddy, we might adjust the spots on the road so that the animals aren’t bringing a lot of mud onto the road. If these (feed) pellets get wet, they break down pretty quickly into mush and a lot of the animals won’t eat that.”

There are a number of reasons why the pellets are distributed on the paved road, as opposed to on the grass or dirt in a pasture.

“We will get a lot less little rocks mixed in when we feed on the pavement,” he said. “You don’t want animals accidentally grabbing those and chipping teeth. It’s also easier for us to tell how much they’ve consumed. It’s a good way to pull the animals toward the road for guests who are coming through on the scenic drive.

“Reducing parasite load is another benefit to feeding on the road. Most parasites crawl up blades of grass with the intent to be ingested.”

“This pasture is small enough and we feed in one general area, so you can see the hierarchy nearly every day,” he said. “The (greater) kudu are usually the first ones to the feed station, but the (mountain) bongo definitely have the say so on who eats where. They aren’t usually aggressive about it; the bongo walk up to the trough and the kudu walk away.

“That’s a good example that these animals don’t always let horn size decide the pecking order. The male kudu may have the horn size, but the bongo are such stocky, beefy animals and that seems to win out.

“Then, the emus are the oddballs who fit in wherever they can. Technically, the emus run up to the feeders first, but they don’t stay long.”

Coastal hay is not a factor when feeding the Buffer Pasture.

“Because these antelope species are browsers, they get the alfalfa hay, which is richer in protein,” Jernigan said. “They get the same pellets as Front Pasture. We switch to a 14 percent-protein pellet when the quality grass comes up versus a 17 percent pellet. We don’t want to overload them on protein, so 17 percent is used more in the winter or a dry summer.”

Jernigan usually only feeds once per day, unless an animal really seems to be in need of more nutrition.

“If we have cold, nasty weather, we may try to spot feed some animals that look cold or hungry in the afternoon,” he said. “If we are doing a medical procedure in a pasture, we typically don’t try to feed that pasture until the procedure is done. If an animal has already eaten pellets, there could be complications when it goes under anesthesia.”

It is the job of animal care staff to prioritize the welfare of all species they are responsible for, but make no mistake, these folks have their favorite animals just like everyone else.

“The bongo and kudu are definitely my two favorite species at Fossil Rim,” Jernigan said. “The scimitar and roan are also favorites of mine. The kudu and bongo are interesting to me because they are woodland antelope and very unique looking. They both have a skittish, gentle demeanor, as opposed to some of the aggressive antelope we have.”

This may be the smallest Fossil Rim pasture, but it is not short on sights to see.

“You definitely see some fun action from some of these animals,” he said. “The first example that comes to mind is when the emus start zooming around the Buffer Pasture, chasing each other; that’s always interesting to watch. That will usually happen if they get excited when they see my truck coming through the pasture.”

If witnessing the morning feeding interaction sounds interesting to you, when Fossil Rim fully reopens, consider booking a Crack O’Dawn Tour on a weekend morning or target the 9 a.m. Safari Tour on any day of the week.