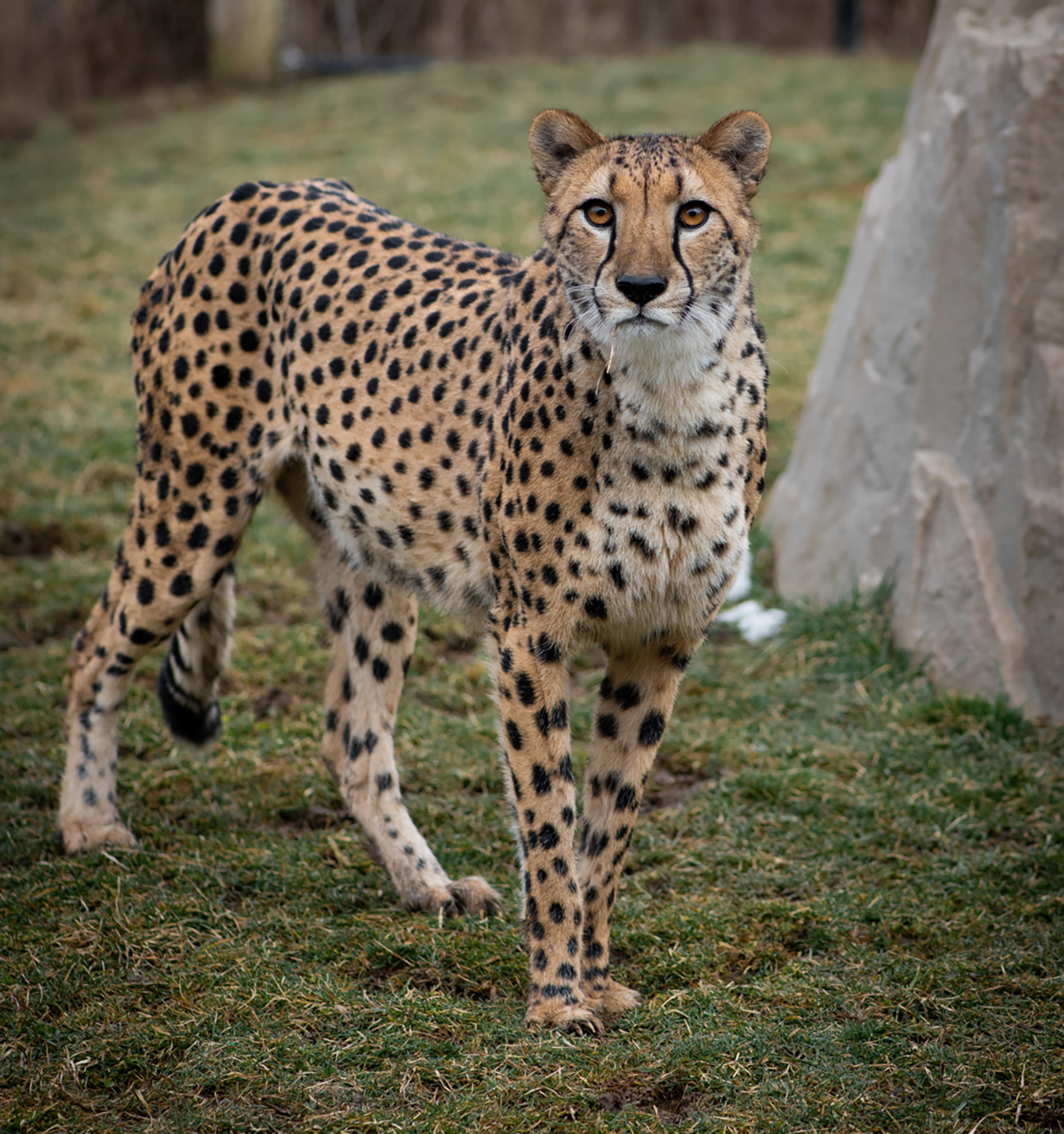 Powell, OH – In a groundbreaking scientific achievement, two cheetah cubs have been born through in vitro fertilization and embryo transfer into a surrogate mother at Columbus Zoo and Aquarium.

The births are the result of careful planning and innovative medical expertise through a partnership between Columbus Zoo, Smithsonian’s National Zoo and Conservation Biology Institute (SCBI) in Front Royal, Va., and Fossil Rim Wildlife Center in Glen Rose, Texas—three leading institutions with a commitment to conservation. These efforts were also part of a breeding recommendation from the Association of Zoos & Aquariums’ (AZA) Species Survival Plan® (SSP) and the Cheetah Sustainability Program (CSP), developed to manage a sustainable population of cheetahs in human care.

While the cubs’ biological mother is “Kibibi,” the cubs were delivered on Wednesday, February 19, 2020 at 9:50 p.m. and 10:20 p.m. by “Isabelle” (Izzy). The cheetahs’ care team observed the births through a remote camera and continue to monitor Izzy and her cubs closely.

Izzy, a first-time mom, has been providing great care to her cubs. The animal care team performed a wellness check on the cubs Friday, February 21 and determined that Izzy gave birth to a male cub and a female cub. The cubs have been observed nursing, and the male currently weighs in at 480 grams, while the female weighs 350 grams.

“These two cubs may be tiny, but they represent a huge accomplishment with expert biologists and zoologists working together to create this scientific marvel,” said Dr. Randy Junge, Columbus Zoo’s Vice President of Animal Health. “This achievement expands scientific knowledge of cheetah reproduction and may become an important part of the species’ population management in the future.”

With in vitro fertilization, or IVF, sperm and eggs are fertilized in a laboratory and then incubated to create embryos. The embryos are implanted into a female’s womb, where they may develop into fetuses. IVF has become a more common process with humans and some other species, but it previously has been unsuccessful in large cats, including cheetahs and lions.

Female cheetahs Kibibi and “Bella” first received hormone injections on November 14 and 18, 2019 to stimulate follicle development. Eggs (oocytes) were taken on November 19 from six-and-a-half-year-old Kibibi and nine-year-old Bella, whose genes are considered to be valuable for maintaining a strong lineage of cheetahs in human care. The bloodlines of Izzy and her sister, “Ophelia,” are already well-represented in the genetic registry, so they were selected as surrogates. After age eight, cheetahs’ ability to reproduce declines significantly and, because Izzy and Ophelia are three years old, they have a better chance to safely deliver healthy, full-term cubs.

Once Kibibi and Bella’s eggs were extracted, the eggs were then fertilized on November 19 in a Columbus Zoo laboratory using thawed semen originally collected in February 2019 from two cheetahs: a male from Fossil Rim Wildlife Center and another from SCBI.

On November 21, the early-stage embryos from Kibibi were then implanted into Izzy, while embryos from both Kibibi and Bella were implanted into her sister, Ophelia, by Dr. Adrienne Crosier, a cheetah biologist with SCBI; Dr. Pierre Comizzoli, research biologist at SCBI; and the Columbus Zoo Veterinary Team. It was only the third time scientists had ever attempted this procedure.

On December 23, an ultrasound revealed the remarkable news: two fetuses were growing in Izzy, although none took hold in Ophelia. The father of the cubs is three-year-old “Slash” from Fossil Rim Wildlife Center.

“I am very proud of the team for this accomplishment,” said Jason Ahistus, Fossil Rim Wildlife Center Carnivore Curator. “It gives the cheetah conservation community another tool to use in cheetah management, both in situ and ex situ. It really opens the door to many new opportunities that can help the global cheetah population. This is a big win for the cheetah.”

The Columbus Zoo’s animal care team is limiting access to the cheetahs’ private birthing area. As a cheetah’s gestation is typically 93 days and her due date was estimated to be February 22, Izzy’s care team put her on a 24-hour birth watch beginning Sunday, February 16, and the zoo’s veterinary team stood ready with an incubator warmed up in case the cubs arrived early. Because complications during birth can occur, the team also was prepared to perform an immediate Caesarean section if Izzy or the cubs became distressed.

Columbus Zoo has extensive experience with cheetahs, having raised many cubs. Izzy, Ophelia, and Kibibi are three of the zoo’s ambassador cheetahs, most of whom arrived at the zoo to be raised by hand when their mothers were unable to care for them. As a result, the cheetah ambassadors are accustomed to humans and have formed extremely close bonds with their care providers. The cheetahs are trained to voluntarily allow ultrasounds, X-rays, blood draws, and other medical procedures so the risks of anesthesia often can be avoided. Their training also allowed zoo staff to be near Izzy during the delivery to assist, if needed.

“In the 19 years that I’ve worked with cheetahs, one of the big challenges is that we have no idea if a female is pregnant until at least 60 days following a procedure or breeding,” said Crosier. “Working with Columbus Zoo and Aquarium was a game-changer, because their females are highly cooperative. We knew that Izzy was pregnant at five weeks by ultrasound, and we continued to collect ultrasound data throughout her entire pregnancy. It was a remarkable opportunity and we learned so much.”

“Our animal program is the perfect setup for this type of science,” said Suzi Rapp, Vice President of Animal Programs. “We’re known in our zoological community as experts in raising cubs. If the Cheetah Species Survival Plan has a litter with problems, we’re typically the ones who are called, and we are proud to be able to assist.”

According to the International Union for Conservation of Nature (IUCN), cheetahs have a population classification of “Vulnerable” and a decreasing population trend in their native range of Africa and Iran. Due to threats including habitat loss and fragmentation, conflict with livestock and game farmers, as well as unregulated tourism, cheetahs now inhabit just 10 percent of their historic range. This geographic separation has left the species genetically “bottlenecked,” creating the potential for inbreeding. Scientists estimate that the cheetah population has declined to only approximately 7,500 individuals.

The achievement at Columbus Zoo brings the potential to help ensure the survival of cheetahs in their native range. Conservation scientists have long sought ways to boost their numbers and help maintain genetic diversity of the species. Yet, attempts to artificially inseminate cheetahs often have not been successful, with the last one occurring in 2003.

IVF previously had been somewhat successful in small domestic cats and African wildcats, but it is still rare in big cat species with only the birth of three tiger cubs reported back in 1990. These breakthrough births mark a significant advancement in the field and may provide valuable information to boost future conservation efforts in felid species.

“The first thing we had to do is show that this technique works,” said Junge. “Then, we have to become proficient in it so we can do it efficiently and reliably. With experience, we may be able to freeze embryos and transfer them to Africa.”

“Today’s zoos stand on the forefront of conservation efforts, and these cubs represent one of the crucial ways that zoological professionals contribute to saving wildlife and wild places,” said Tom Stalf, President/CEO of Columbus Zoo and Aquarium. “It takes teamwork, sound science and dedication to help protect these species, and we’re devoted to that cause. Our efforts here in Ohio, our collaboration with our zoological colleagues, and the support of our community are all key to us being able to be part of dedicated cheetah conservation projects so we can make a difference.”

Check out this video that highlights Slash’s contribution to the project: https://youtu.be/N-fGBFCyLBI.

Nov. 14 & 18: The female cheetahs were given hormone injections to stimulate follicle development.

Nov. 19: Eggs (oocytes) were taken from Izzy and Kibibi. Neither had reproduced previously.

Nov. 19: Semen from male cheetahs was thawed and eggs were fertilized.

Dec. 23: Izzy was confirmed pregnant via ultrasound, which appeared to show two cubs. The ultrasound confirmed that Ophelia was not pregnant.