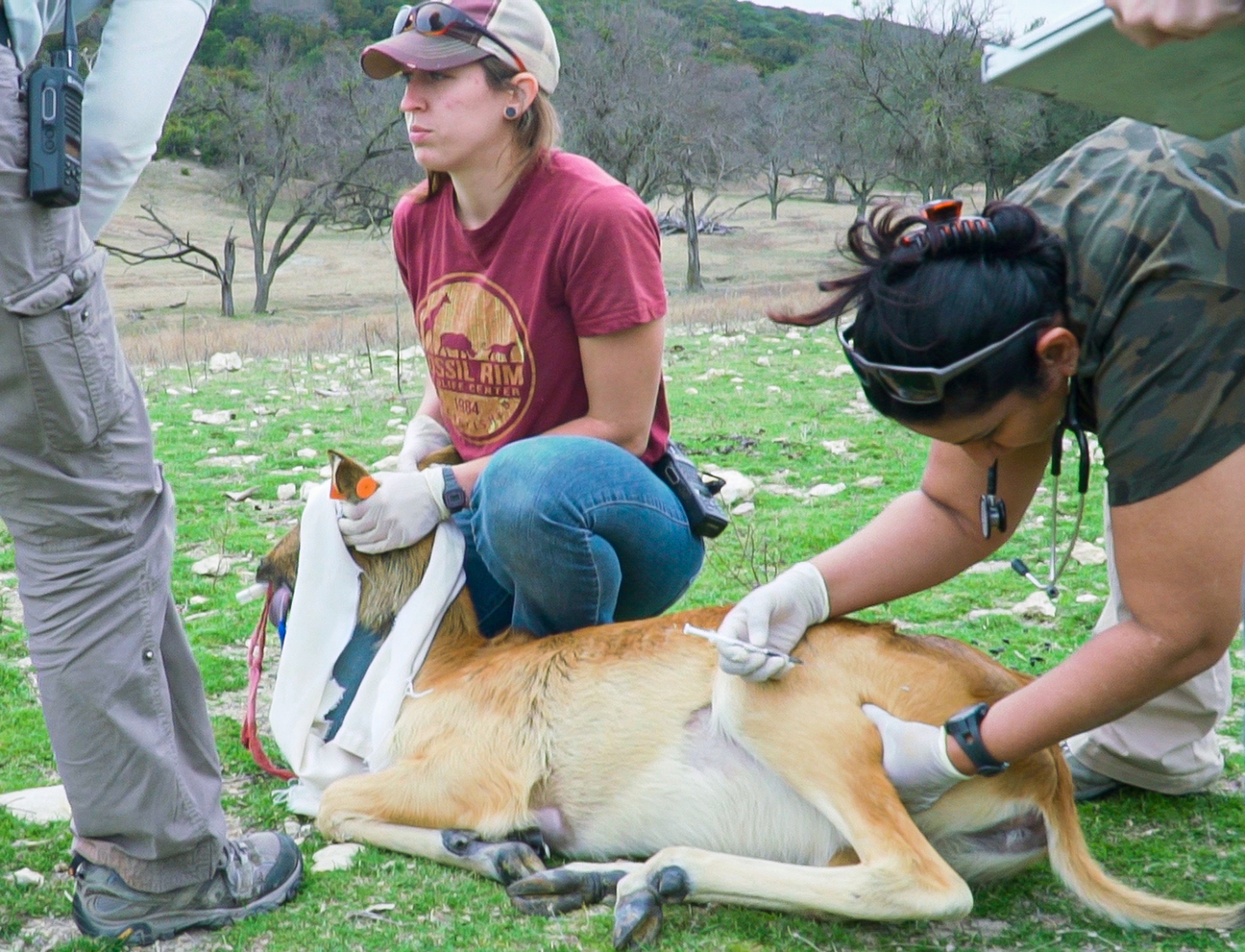 It has not been long since Fossil Rim announced the addition of endangered Nile lechwe in the Game Preserve pasture, but, even more recently, the herd total increased from four to five.

Director of Animal Health Dr. Holly Haefele explained why one female, “801 Orange,” made her public debut later than the other lechwe.

“The species is known for being very flighty,” Haefele said. “When we brought them here initially, they were placed in our quarantine pens. There aren’t many people who go into that area, plus it is quiet. We had them on a mild tranquilizer that we routinely use, doing everything we could to (soothe) their flightiness.

“But, a couple of weeks after their arrival, something must have spooked them, and this particular female injured her leg. Once we realized it was probably a significant injury based on our first look at the leg, we immobilized her and brought her to the vet clinic. At that point, we did radiographs and could see that she had a break along her growth plate; she’s still a young animal.”

The decision was made to cast the lechwe’s leg.

“It was nice to know that surgery wouldn’t be needed, especially in terms of mitigating risk of infection,” she said. “We kept her at the clinic, which meant extended separation from the new herd. Sometimes she was indoors in the padded room; sometimes she was outdoors in the wooden pens. We utilized the oral tranquilizer to keep her mellow, but she did better than I expected in acclimating to her change in routine.”

The cast could not get wet, so the lechwe was brought indoors anytime there was a chance of rain. When it was all said and done, she went through four casts from November 9 to January 9.

“The fracture healed with virtually no complications,” Haefele said. “It occurred at the distal metacarpal, which is essentially above what looks like her wrist (fetlock joint). She was a good patient, and eight weeks is pretty standard for an animal’s bones to heal (when the injury is not severe). She’s walking on it fine.

“She will probably always have a slight limp, but the key is she is able to keep up with the (lechwe) group. An animal doesn’t need to be able to run at top speed inside our protective fences – if she is actually hindered.”

The staff took extra precautions when rejoining her with the other lechwe.

“Because she is flighty, we wanted to take the cast off and release her in one move,” Haefele said. “We removed the cast, left her under anesthesia, drove her to the Game Preserve, and reversed her anesthesia out in the pasture. The hope was she would hook up with the four lechwe that were already out there, and within a couple of days they were reunited. Everything seems to be going well.”

During the first days, and even weeks, an animal is adjusting to a different environment or having new interactions with other animals, it faces a heightened risk of injury.

“Anytime we are introducing a new animal that has come here from another facility, or moving one of our animals to another part of this facility, that change does heighten our concern,” she said. “We have worked with most of these species for a long time, so we know which species to worry about. For example, we never put one wildebeest in the wooden pens, because we know it will go crazy by itself. We would always have at least two of them together, and maybe give them a mild tranquilizer just to be safe.

“We knew lechwe could be skittish, so we put thought into how to handle their arrival, but sometimes the unexpected can still happen. Especially when introducing carnivores, sometimes you can do it along a common fence line – let them get nose to nose to smell and see each other before you put them together.

“We do that with a lot of species to try to prevent conflict and potential injury. Rhino introductions are very important in terms of avoiding conflict.”

People who often read these Words On Wildlife blogs might remember a recent entry about the casting process to heal the injured foot of “Meadow” the cheetah.

“This was a very similar (cast) application process,” Haefele said. “The nice thing about the lechwe injury (relative to the cheetah injury) is we didn’t have to do surgery, so you don’t have all those complications of infection. Generally speaking, hoofstock are rougher on their casts, so we made sure to put Technovit – you mix a powder and liquid and it hardens into whatever shape you want – on the end of the cast to give it some strength.

“Otherwise, the animal’s hoof will wear through the bottom of the cast. We try to put a grid pattern in the bottom so the animal has traction when it moves.”

To read all about the casting process for Meadow, check out: https://tinyurl.com/r3bpu95.

When a cast needs to be applied, Fellowship Veterinarian Dr. Lauren Schmidt happily reports for duty.

“Lauren loves making a cast when an animal needs one; her favorite thing to do is apply a bandage or a cast,” Haefele said. “She is very good at it. You need to have a creative mind to think about how you can improve on each version of a cast that an animal gets.”

Despite 801 Orange and Meadow suffering fractures less than a month apart, this is actually a fairly rare issue at Fossil Rim despite it being home to well over 1,000 animals.

“The first one I dealt with here was a goat, ‘Butters,’ who broke his leg,” Haefele said. “The most recent ones before 801 Orange and Meadow – it was actually another cheetah and another antelope. A young cheetah ‘Dirk’ fractured his distal femur along a growth plate; a surgeon came to fix that and he healed up beautifully without a cast.

“We also had a surgeon fix a bad fracture for ‘Dandy’ the scimitar-horned oryx, and then he wore a series of casts. Hopefully, as a fellow member of an endangered species, this lechwe can follow in Dandy’s footsteps when you consider that he went on to have two more seasons of calves here. We look for the lechwe to have a long life and produce a number of calves.

“There was also a white-tailed deer and a wildebeest. So, seven fractures in my 16 years here that required repair, not including some Attwater’s prairie chicken leg fractures.”

Among these animals mentioned, the female lechwe is an endangered animal, Dandy’s species is still classified as extinct in the wild, and the Attwater’s prairie chickens that required medical attention are some of the most endangered birds in North America.

“We were just talking (as an animal health staff) about working with endangered animals,” Haefele said. “If you go give medical help to an Attwater’s prairie chicken and think about how that bird might be one of 250 in the world, it can seem like a lot of pressure. The lechwe is a new species for us with a male and four females; if we weren’t able to fix this girl, it would’ve been a setback from square one of trying to start this herd. Fortunately, this never looked like an injury that we wouldn’t be able to fix.

“Had it looked like a repair that was beyond our capability, that doesn’t mean somebody couldn’t have fixed it. When Meadow was injured, we realized we didn’t have the surgical expertise and so we called upon outside help.

“We still consulted with a surgeon on the lechwe just to make sure our initial reaction to cast the leg was going to be an appropriate one. It’s certainly not a fun time for the animal to go through a multiple-month healing process, but to be able to put this lechwe into the pasture and for her to reunite with her herd is rewarding for us.”