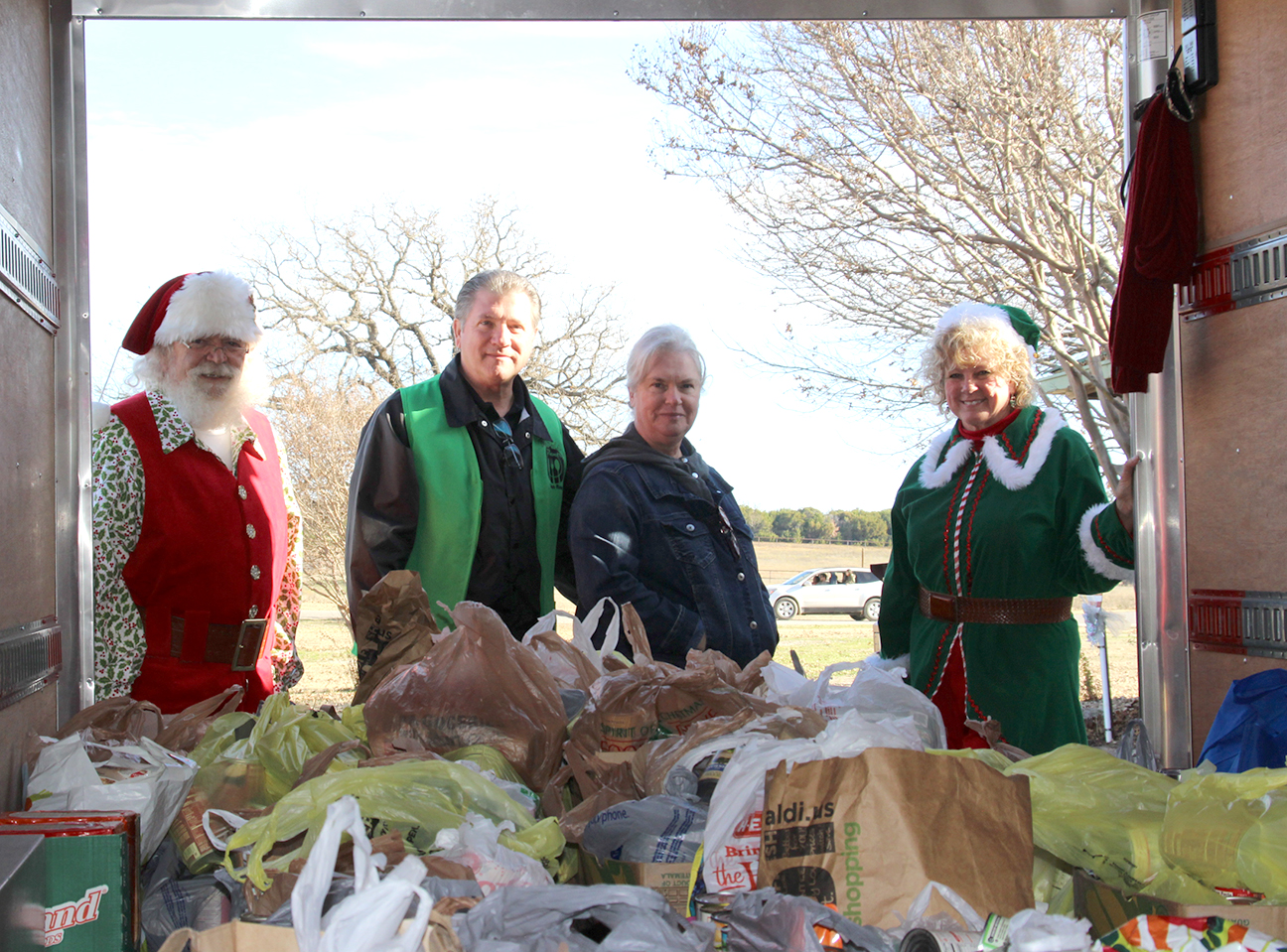 Each year on an early December Saturday, Fossil Rim teams up with the Somervell County Food Bank (SCFB) for a day of great potential.

It is an opportunity to have a successful food drive and give the food bank a much-needed influx of inventory during the holiday season. People just have to bring proof of residence or employment in Somervell County, along with two cans of food or other nonperishable food items per person. 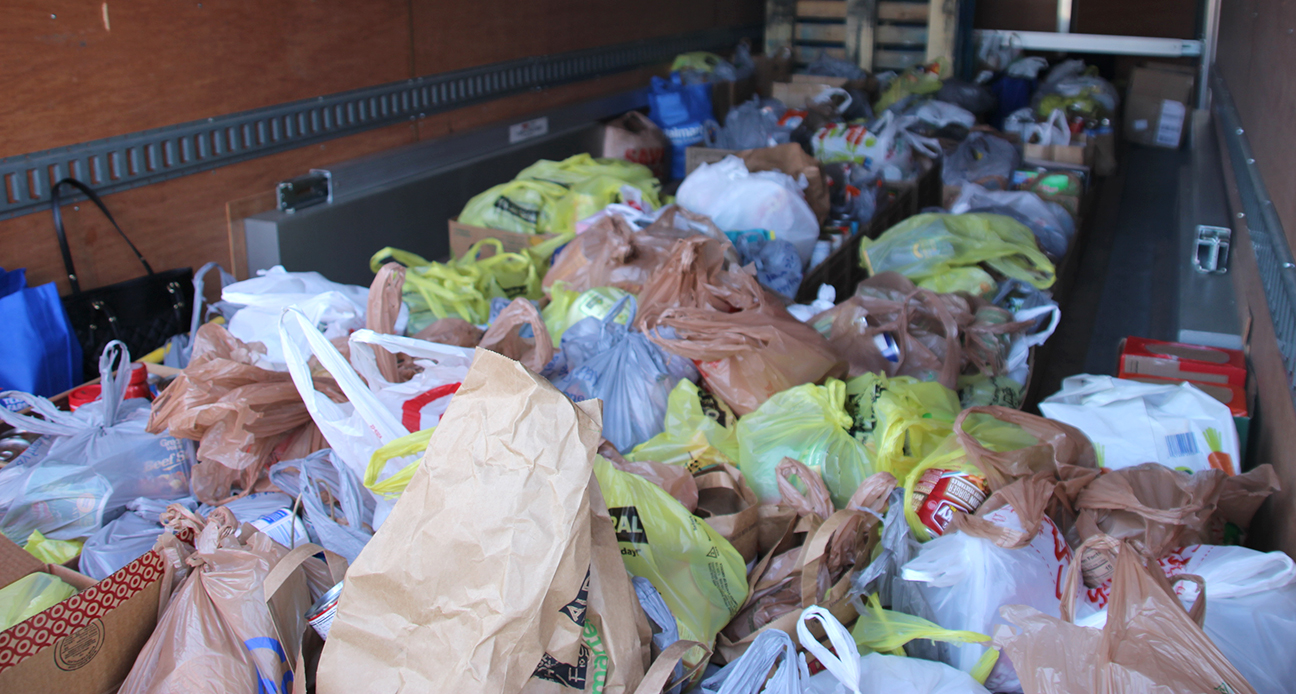 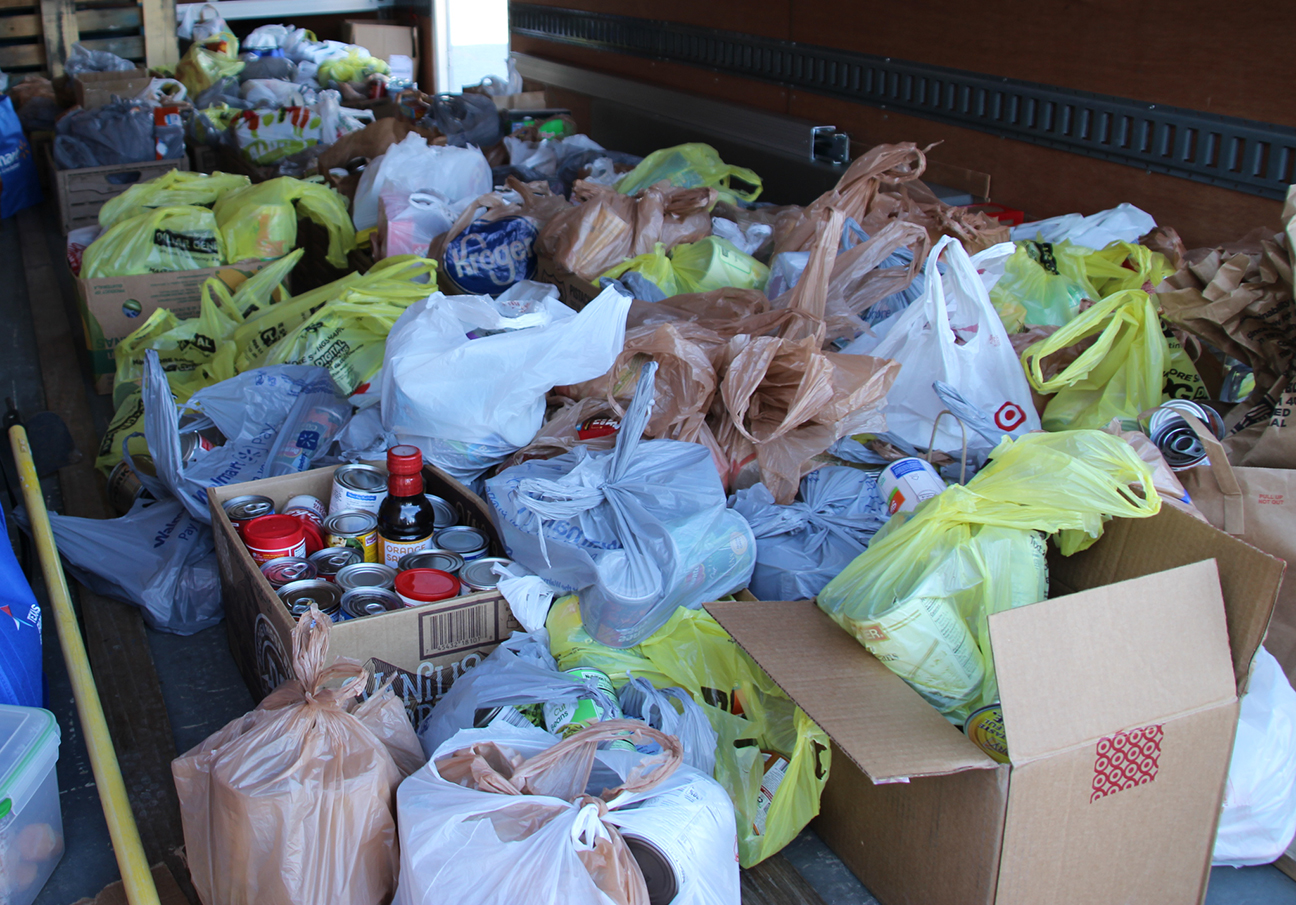 Somervell County Day actually ends up being the only day each year that a lot of people who live close to Fossil Rim visit the facility. Fortunately for them and the food bank’s shelves, this year brought warm, sunny weather and thus loaded up the food bank’s trailer in front of Fossil Rim’s Admission Center.

SCFB Director Bill French and his wife, Jackie, were on hand to collect the food, and Bill estimated the total could be up to 1,500 pounds. He added that it was the most successful Somervell County Day for the food bank in the 13 years since the occasion’s inception. More than 840 residents and/or employees of Somervell County entered the Front Pasture after a food bank donation. 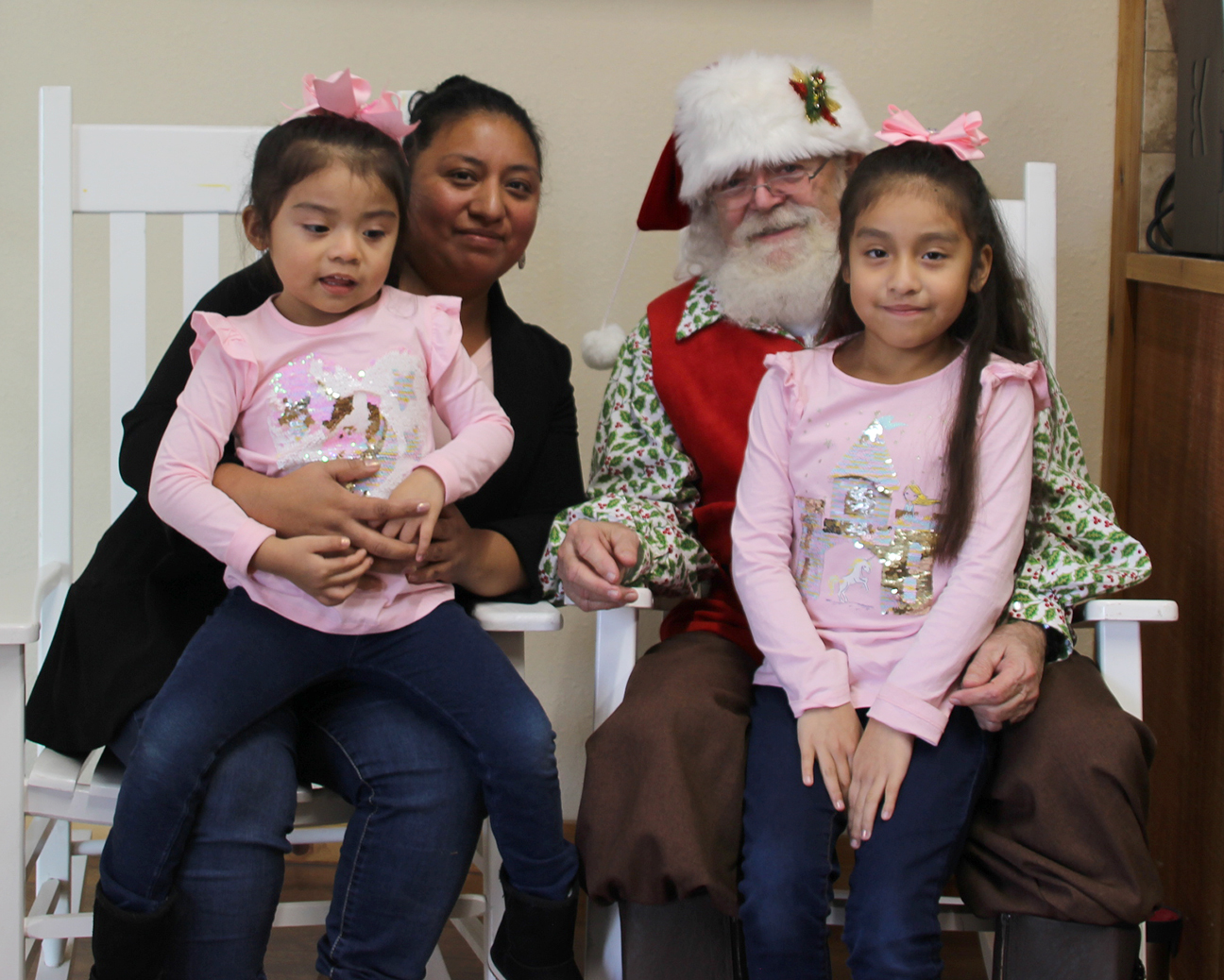 “This is a tremendous amount of food for one food drive,” he said. “It takes thousands of pounds per month, so this will go a long way towards augmenting what we’d normally have to purchase. Each Tuesday, people bring food to the food bank, and this will multiply that many times over for this week.

“I will say that many people brought more than just the two cans per person for entry. We had some people who brought bags and boxes of food.” 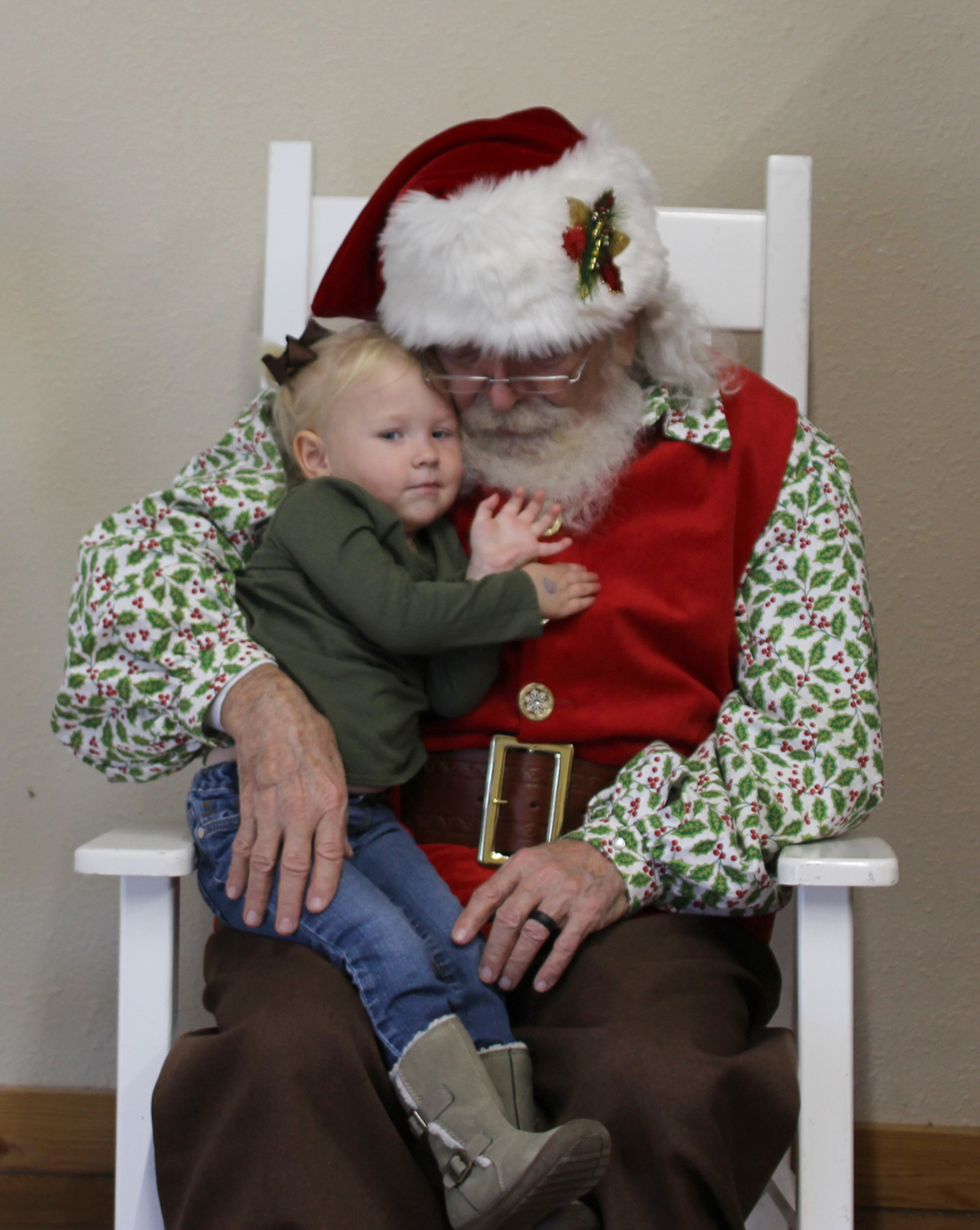 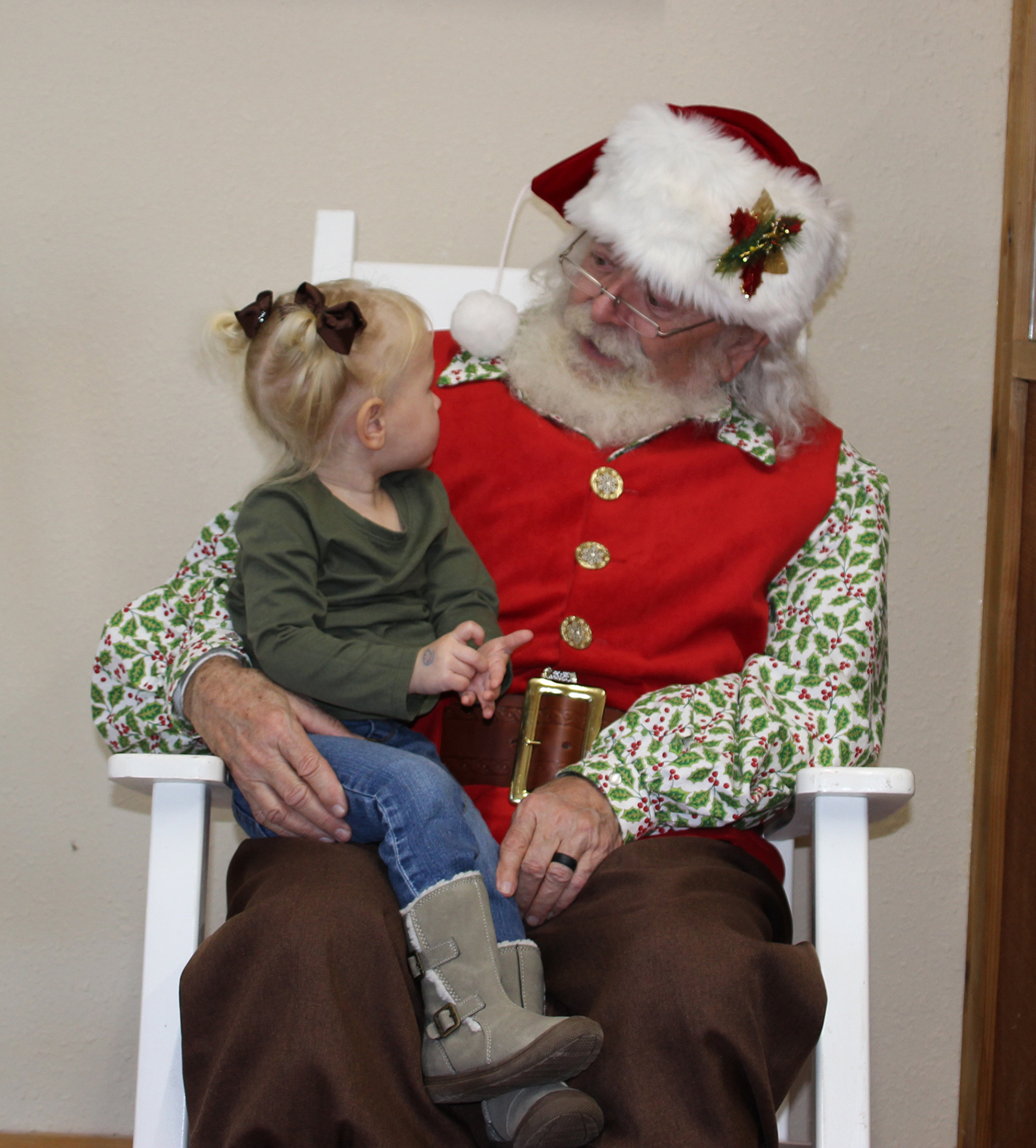 Jackie mentioned that the donations did not stop at food – there were also some monetary gifts.

“When we order from Tarrant Area Food Bank (TAFB), we can get our food at 10 cents on the dollar, so monetary offerings go a long way,” Bill said.

This was their second time to attend Somervell County Day on behalf of the food bank, and their reception from Mother Nature was much warmer this time around.

“I was dressed like an Eskimo last year at this event, but this has been a perfect day,” Bill said. “The best thing about that great weather is it increased the amount of food donated today.”

This is the ideal time of year for a food drive due to the increased food demands during the holiday season.

“This is absolutely the perfect time for us to receive this boost, because money is tighter for families during the holidays,” Bill said. “That means they can use the extra help from us. We went from 145 families per month last summer to 185 families now, and most of that increase has come recently.”

French began training for the director position in September 2018 and then took over as director on January 1, 2019. He replaced Debi Bly as director, and she followed the tenure of her husband, Max.

“I was working with the Somervell County Committee on Aging, but twice a month I’d go to the food bank and take boxes of food to people who were homebound,” Bill said. “I did that for eight-and-a-half years and became more aware of the food bank’s operation, plus I got better acquainted with Max and Debi. I came to appreciate what a wonderful blessing the food bank is to this county, and the decision to become director was an easy one. The Blys have been indispensable for guidance, and they set a great precedent to follow.”

French is appreciative of the teamwork with Fossil Rim, as well.

“Our partnership with Fossil Rim has been wonderful,” he said. “We appreciate the invitation for this food drive every time. Plus, some Fossil Rim staff members (Warren Lewis, Mark Phillips, Daniel Branham, Trent Sandlin, Garrett Gosdin) have helped us transport food from our source, TAFB, to our food bank in Glen Rose.

“They have driven our large trailer many, many times through the years. It takes a pretty (substantial) truck to make the transport.” 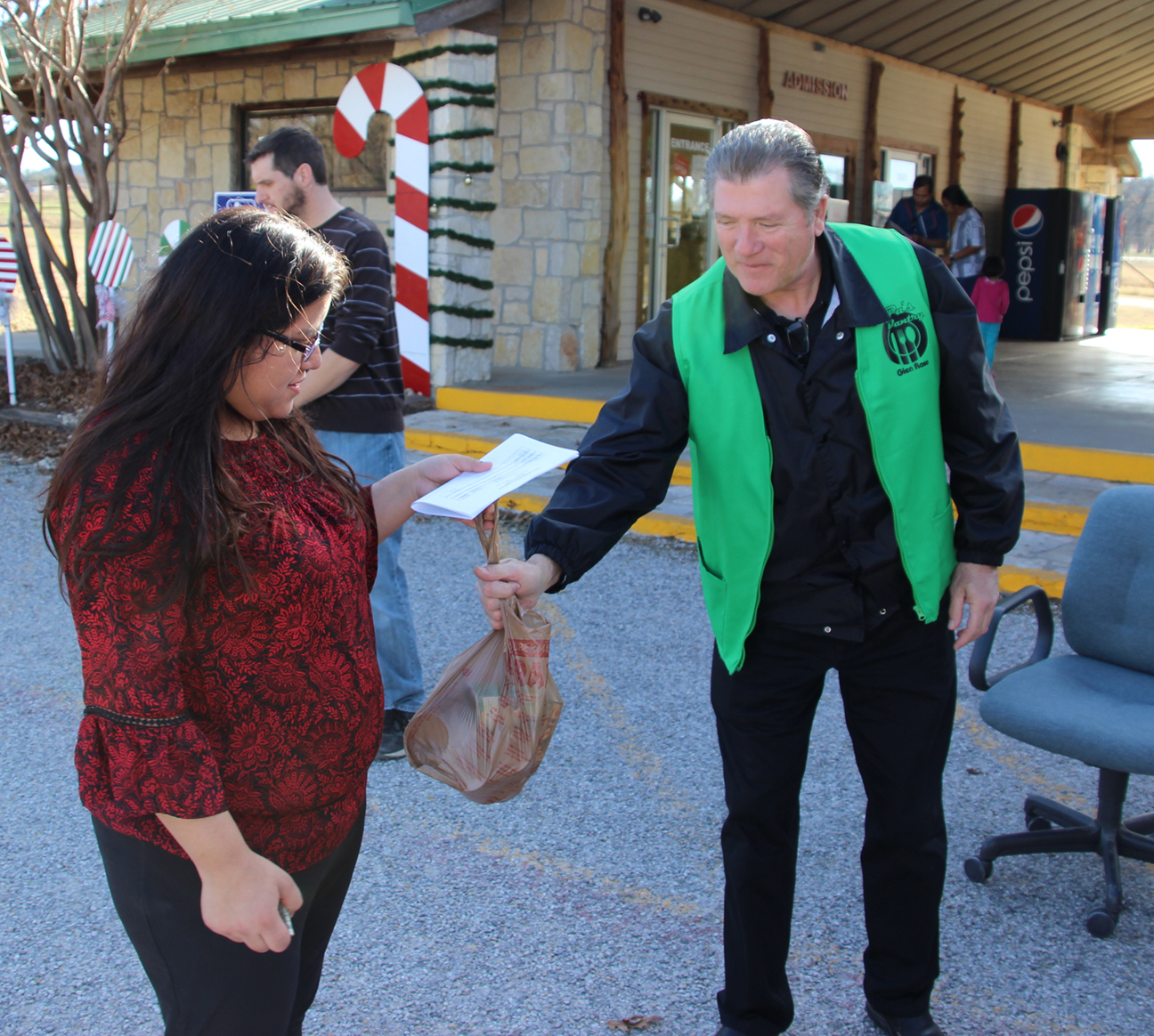 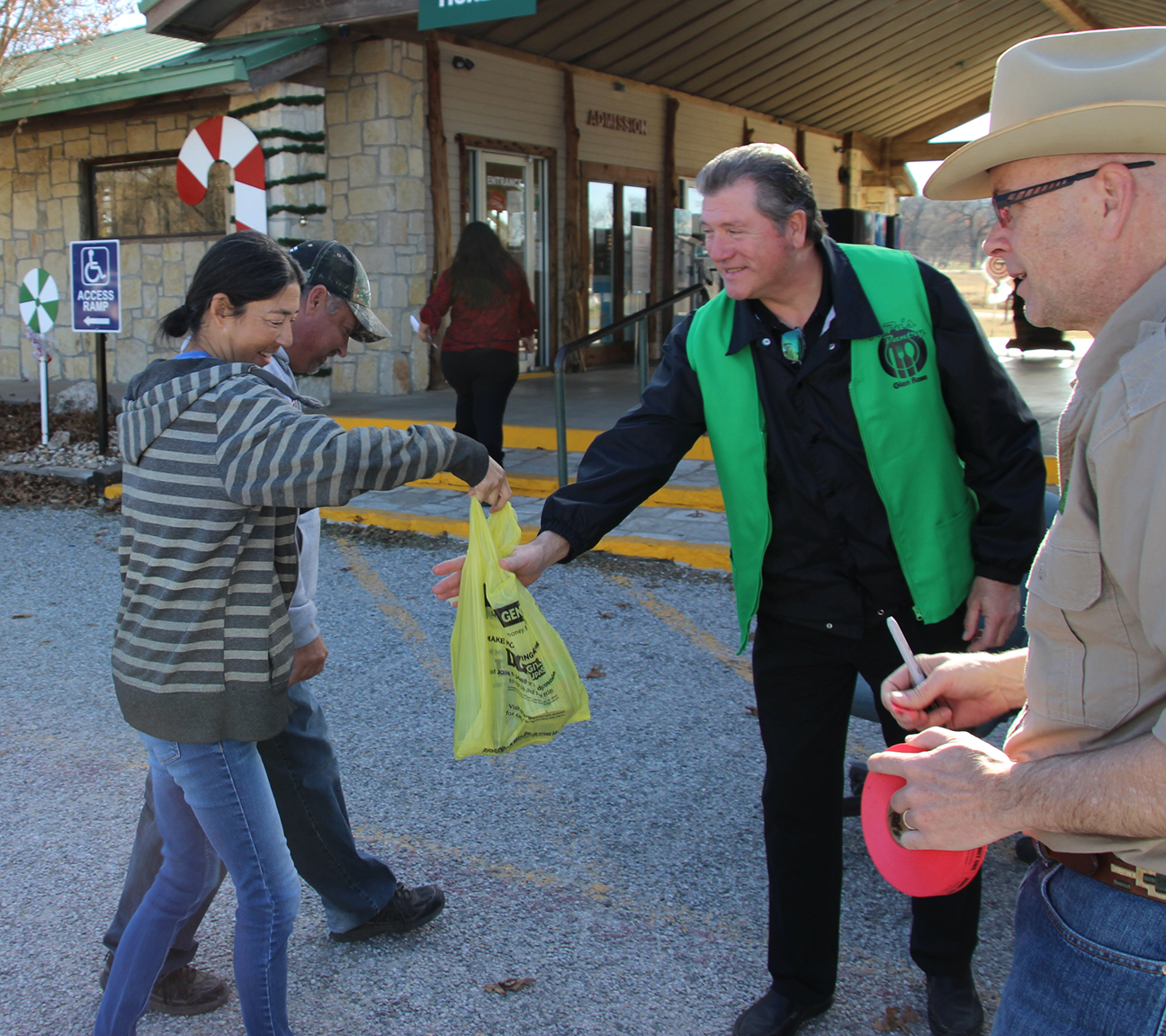 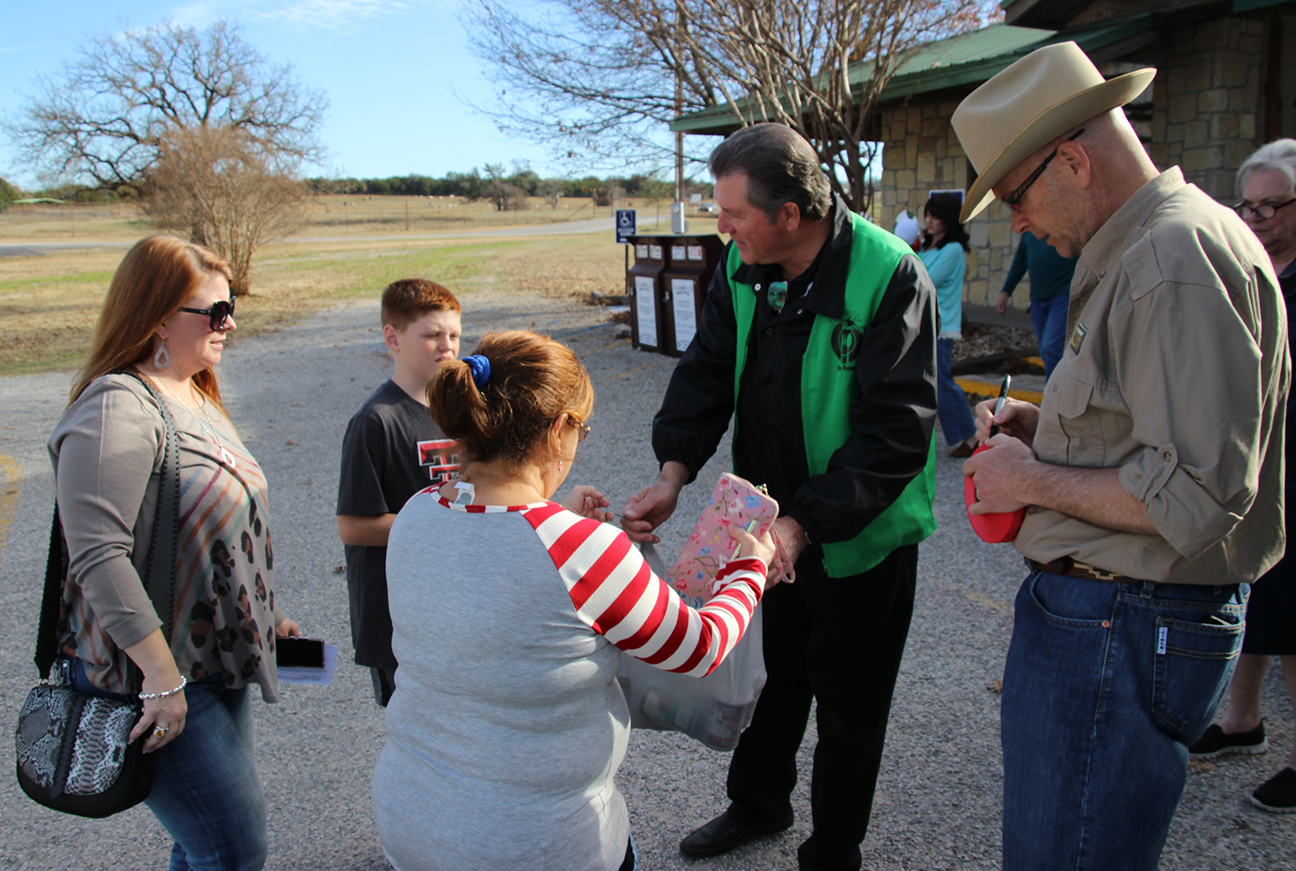 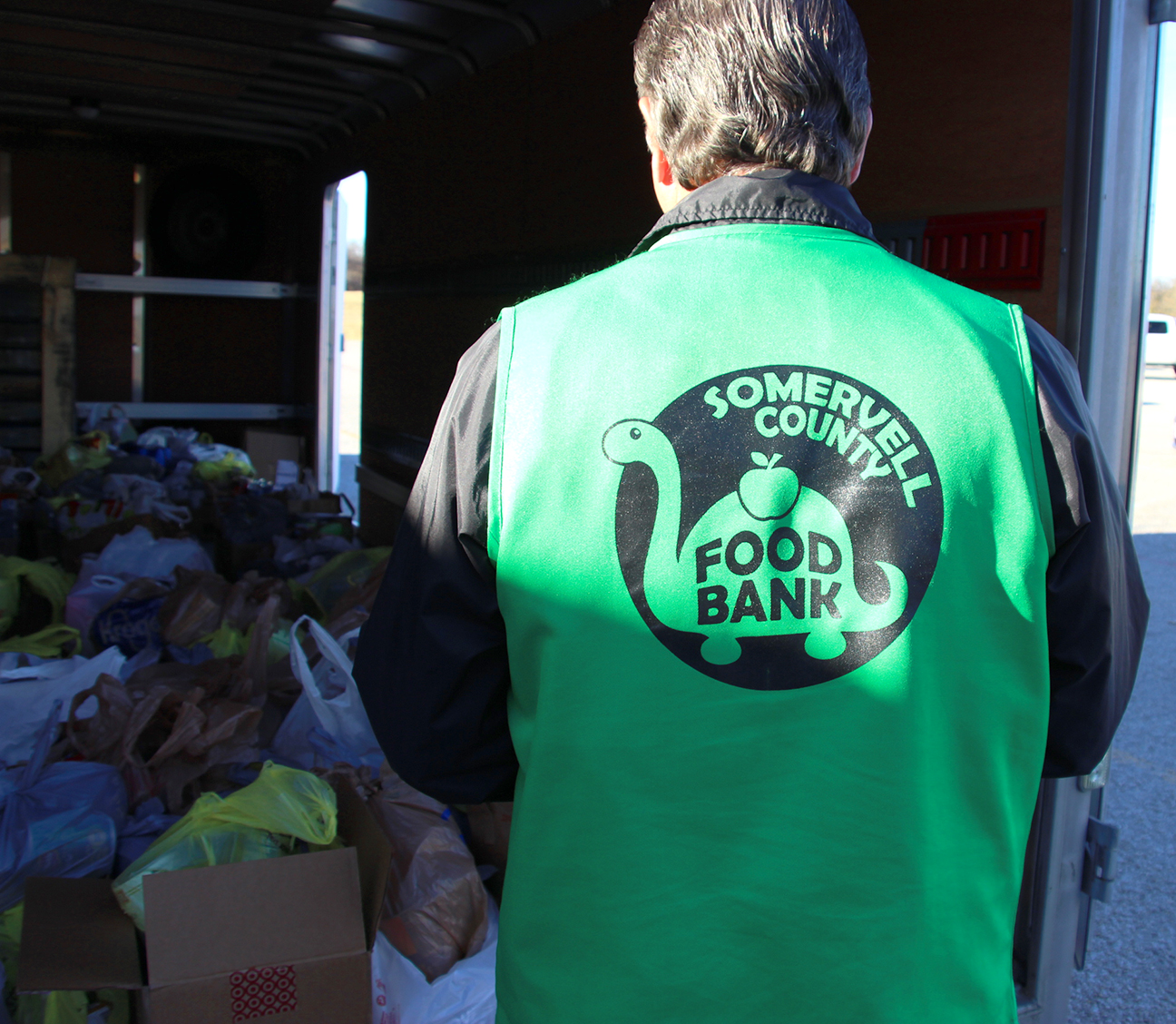 Fossil Rim volunteers Dan Broyles and Sara Paulsen were also on hand as Santa Claus and The Elf to take free photos with children who visited on Somervell County Day. For families in need this month, French and the food bank trailer might look a bit like Santa and his sleigh.