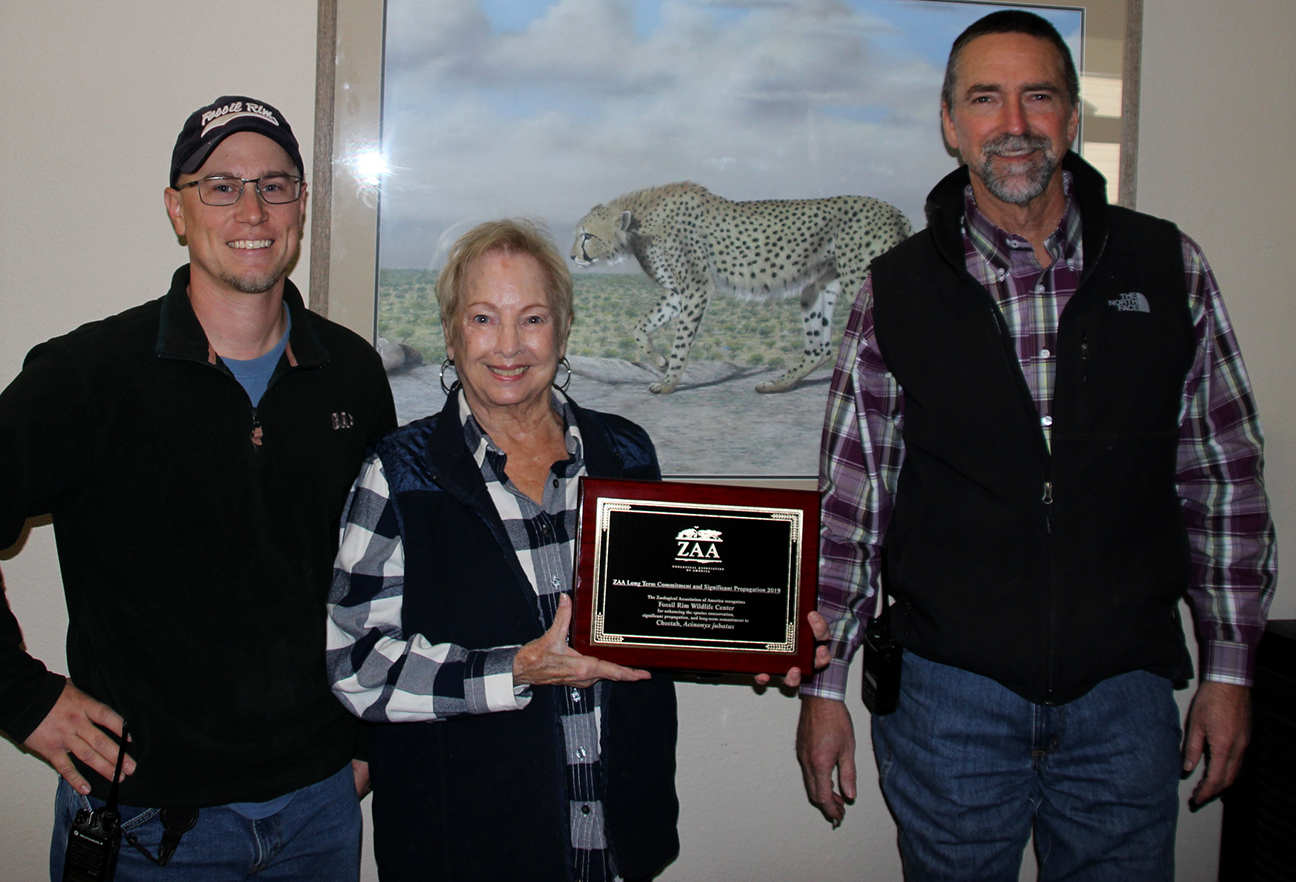 Fossil Rim has been devoted to cheetahs since 1985, and its efforts for the species have not gone unnoticed.

Carnivore curator since 2017 and a key figure in Fossil Rim’s cheetah program since 2008, Ahistus discussed the honor.

“It’s exciting to receive this award and recognition from ZAA for our commitment and efforts in our cheetah breeding program,” he said. “Fossil Rim has been involved with ex situ cheetah conservation for 34 years, and this is one of our most successful programs. We have learned through the ups and downs of cheetah husbandry and have built a very successful program while also sharing our expertise with other facilities to improve overall cheetah management. We have been a leader in North America for cheetah cub production with over 60 litters and 207 cubs being born in that time frame.”

Ahistus pointed to some factors that have powered the program.

“Consistent, dedicated, knowledgeable staff – both in animal care and animal health, has been crucial,” he said. “I’d point to the passion and drive we have to constantly improve our husbandry standards while dealing with the many challenges associated with cheetah management. Also, our well-maintained, very functional cheetah breeding facility has received a lot of upgrades through the years.”

Fossil Rim has been a leader in cheetah husbandry and breeding since work for the species began at the wildlife center in 1985.

“We have played a major role in AZA’s (Association of Zoos & Aquariums) Cheetah SSP (Species Survival Plan) as a large breeding center,” Ahistus said. “We have worked to improve cub production, husbandry expertise, and communication within the cheetah Breeding Centers Coalition, plus we are now involved in the management of the ZAA Cheetah AMP (Animal Management Program). Fossil Rim is in great position to assist in ex situ conservation efforts in both AZA and ZAA as a dual-accredited facility. Our efforts in both of those organizations can help to improve population sustainability, while we also look to build partnerships in North America and beyond for the greater good of cheetah conservation.”

Ahistus is the first to say that the work for cheetahs is never done.

“With the wild cheetah population declining rapidly, we all need to work together to improve efforts – both ex situ and in situ – for this species,” he said. “It has been great to be heavily involved in Fossil Rim’s success to date, and I look forward to Fossil Rim’s involvement moving forward and taking on the challenges to help save this species.”

After working for Fossil Rim’s cheetahs from 1989 to 2017, former Carnivore Curator Mary Jo Stearns discussed the progression of the program.

“I think we are all very proud to receive this honor from the ZAA, because when we started this program in 1985 with (eight) cheetahs from Africa, we never dreamed that through the years we would advance to over 200 cubs born,” she said. “It took a lot of work, passion, and commitment, plus Fossil Rim has been behind this program from day one to see our goals come to fruition. We have a lot more to do, obviously, but I think that our work with cheetahs is something everyone at Fossil rim can be very proud of.”

Over the years, Fossil Rim’s feline focus has either been entirely upon cheetahs or they have been the clear primary species.

“Only having cheetahs most of these years, as opposed to having a variety of felids, has been instrumental in being able to invest our time and dedication into this species,” Stearns said. “That certainly played a part in our success.”

Snodgrass got the ball rolling on the cheetah program in 1985, and then worked in tandem with Stearns from 1989 to 2008.

“We are very fortunate to have incredible staff throughout Fossil Rim, and it’s no secret that our carnivore staff has focused on cheetahs day in and day out, being constant learners and applying what they learn,” he said. “That approach is undoubtedly a key component to our cheetah success. I would also credit a good environment here, quality facilities, a substantial number of cheetahs at Fossil Rim to maintain genetic diversity, and a variety of management options.”

Some cheetahs at Fossil Rim are located at the Robert B. Haas Family Cheetah Conservancy, while others reside at the David P. Thompson Cheetah Conservation Center. The cheetahs shift among different yards at each facility, plus they will be transported to the other facility at times.

“Female cheetahs in the wild roam over vast areas and males may have a territory, but it’s huge,” Snodgrass said. “Cheetahs need to move. So, having many different options regarding the yards they can be shifted to across two separate facilities in the park helps with biosecurity and provides needed enrichment.”

In terms of production in comparison to other North American facilities, the cheetah program is definitely one of the prominent programs at Fossil Rim.

“Cheetahs are a major species for us in terms of reproduction,” Snodgrass said. “We are a conservation production center. In order to sustain these animals’ existence in the world, we need to produce offspring. Because we focus on relatively few species, we can do it intensively and generally with success.

“Cheetahs, addax, Attwater’s prairie chickens, scimitar-horned oryx, wildebeest, sable, waterbuck, gemsbok, and giraffes – we are prominent producers of these species. Cheetahs are a challenging species to produce, but we aren’t afraid of that. This is about ensuring their survival.”

The person who has been at Fossil Rim every single year of the cheetah program in one role or another, Snodgrass is ready for many more.

“Our cheetah program has come a long way,” he said. “So much has been learned, and yet there is still so much left to learn.”