Bonesteel Takes The Next Step At Nature Store 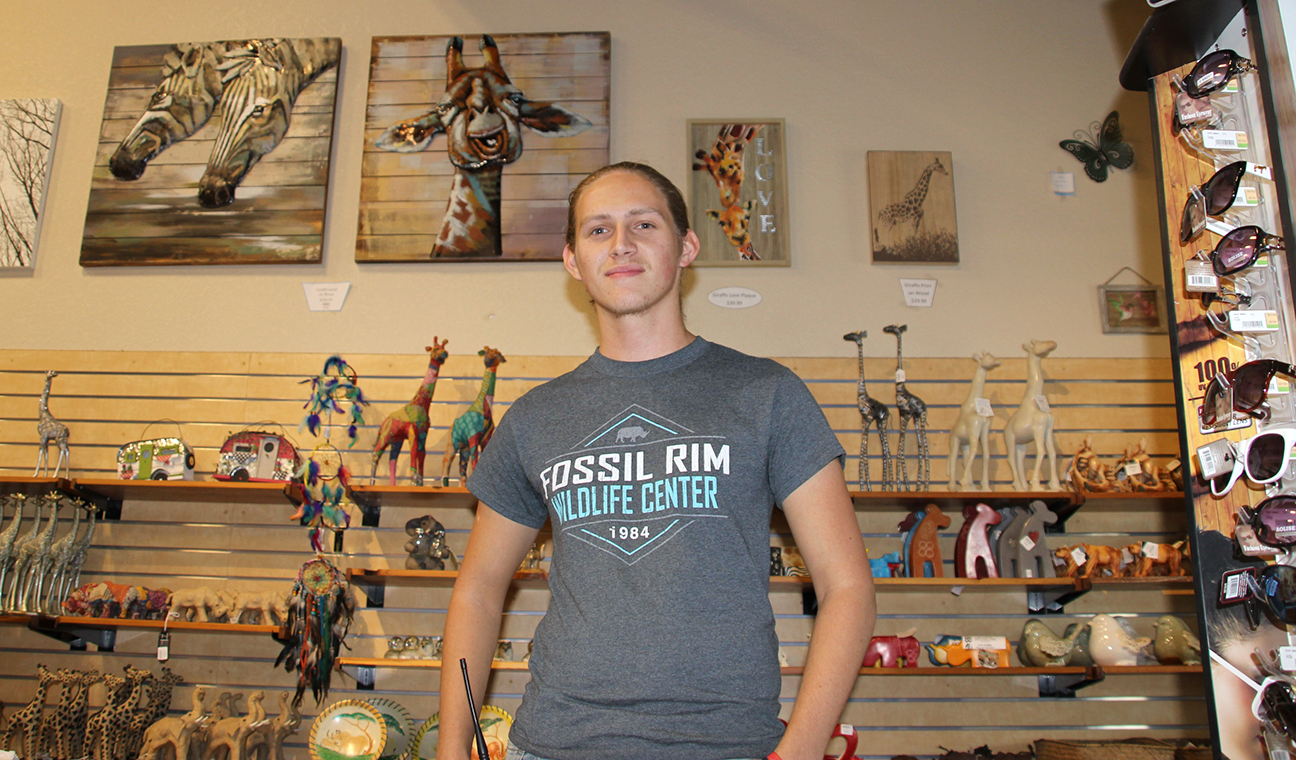 From a professional standpoint, Fossil Rim’s Nature Store is all Kade Bonesteel has ever known, and he would not have it any other way.

In October, the native of nearby Glen Rose was promoted to Nature Store Supervisor.

“Working at the Nature Store is the only job I’ve ever had,” he said. “I visited Fossil Rim a few months before I was even old enough to work here. I remember coming up to the store and saying ‘this would be a cool job.’

“Six months later, I applied and here I am today. I have memories of visiting when I was little, especially visiting the Children’s Animal Center.”

Bonesteel started as a retail associate on Valentine’s Day in 2014. He later advanced to retail receiving clerk before this latest promotion.

“I really like the whole business aspect of working in retail – supply and demand, how to get the customer’s attention through merchandising,” he said, as he closes in on six years at the store. “It’s cold today, so we put all the hoodies up front. If Fossil Rim is having a rhino-related event, we’ll set out more rhino items in heavy-traffic areas.

“One day, I hope to start a retail business of my own. I enjoy dealing with customers, working in the receiving aspect, and managing our staff.”

Speaking of the store’s staff, Bonesteel appreciates the camaraderie they have.

“The staff we have at the store often changes, considering a few of them work at the Overlook Café, as well,” he said. “We try to train them for both jobs. We are like a family.

“You don’t come to work and dread being here. It’s a home away from home where we have good teamwork.”

Bonesteel reflected on the decision to apply for supervisor.

“The position opened up, and I just thought I was ready to step it up a notch,” he said. “It’s more responsibility, of course, but it’s good to keep learning, and that’s what I intend to do. I talked to (former Nature Store Supervisor and current Lodgings Manager) Danial (Ramirez) a lot about it, and I still do quite often.

“He was in this position nearly the entire time I’ve worked here. I can also go to (Director of Tourism) Donna (Steakley) with any questions I might have.”

Steakley has invested so much of her time and effort into making the Nature Store what it is today, so she showed a lot of confidence in Bonesteel to make him supervisor.

“She’s really taught me a lot,” he said. “We often talk about trending items, which she learns about at trade shows. She gets merchandise at good prices and often predicts correctly what will be hot-selling items in the store. Next year, I’ll be going to two trade shows, and I’m excited for that.”

There is a particular type of Nature Store item that seems to stay hot.

“The next time you visit the store, no matter when that is, I can tell you some of our hot items at that point will probably be t-shirts,” he said. “We have such a large variety, plus who doesn’t like t-shirts? For people who are familiar with our ‘Chubby Unicorn’ shirts, they sell out and we get asked about them almost every day. I hope to find those hot items for the store someday.”

Why should a first-time Fossil Rim visitor be sure to swing by the Nature Store?

“If someone has never been to the Nature Store, I’d tell them that our prices are pretty competitive with any other gift shop that deals with animal conservation,” he said. “We have a large variety of high-quality items, and the store itself is pretty big. I think we have something for everybody.”

If you saw something neat on your last visit to the store but did not make a purchase at the time, Bonesteel is just a phone call away.

“Depending on the item, we can take over-the-phone purchases,” he said. “We don’t ship breakable items or really big items, but if someone wants a t-shirt, postcard, or something like that, we can get their information and send it to them. Maybe you were here and saw an interesting item, but didn’t buy it. If you just call and give me a description, I’ll see if we still have it in stock.”

Bonesteel can step out the back door of the store and see a giraffe walking across the Game Preserve pasture. Life is good.

“I live right down the road from here, so I’m always here when I’m needed,” he said. “I’m thankful for this opportunity. It’s going to be a journey – a lot of learning and gaining experience. I listen to Donna talking about everything related to retail and just try to soak it all in.”

1 thought on “Bonesteel Takes The Next Step At Nature Store”