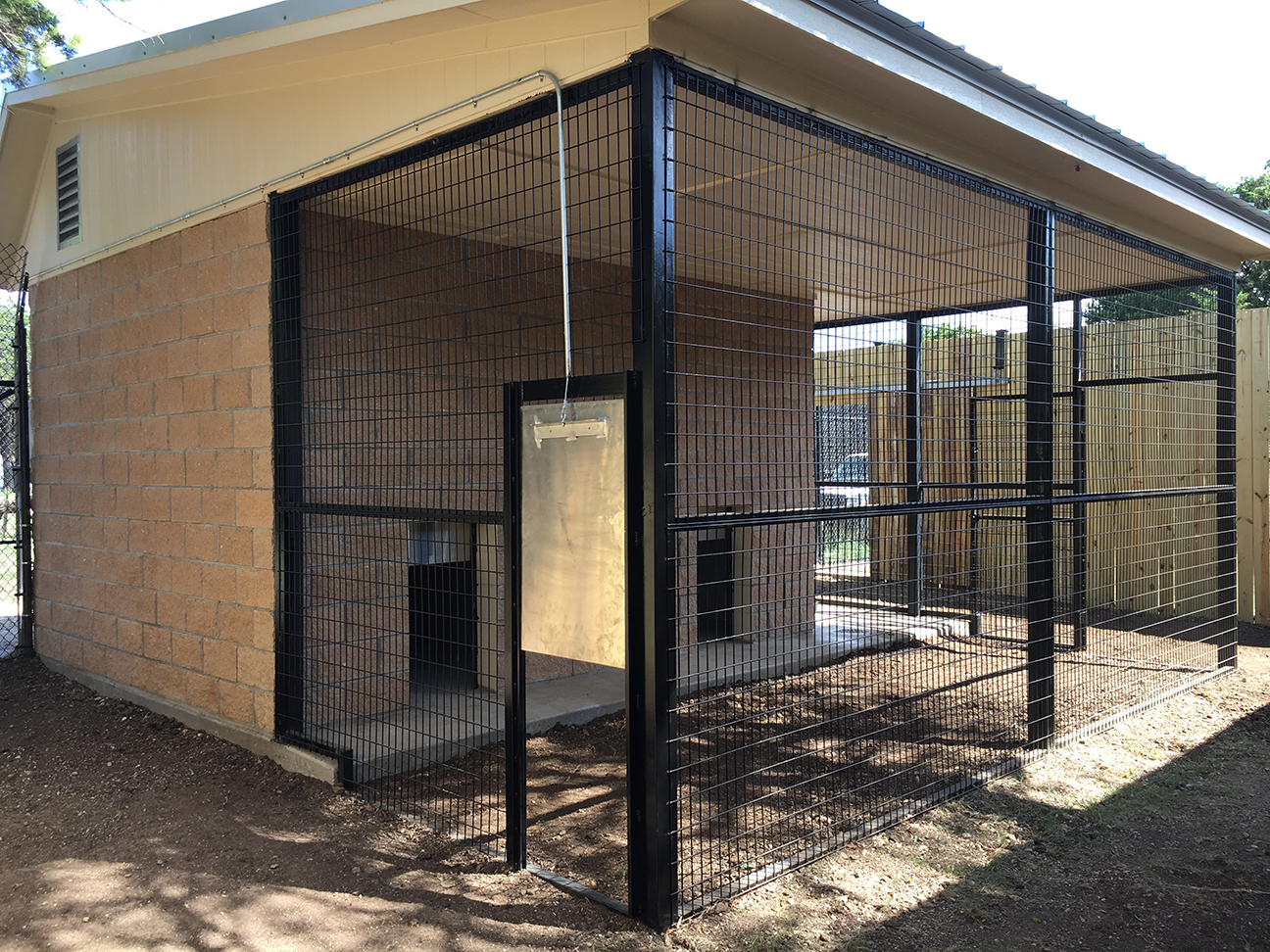 As the Fossil Rim cheetah program continues to make strides in cub production, the need for optimal cub care continues to grow accordingly.

A neonate yard built with cheetah cubs in mind was recently completed within the Robert B. Haas Family Cheetah Conservancy – aka “Cheetah Hill,” but it can accommodate a more diverse set of purposes, as well.

“We’ve always had the need for a cheetah neonate yard, because we haven’t had a great spot to hand-raise carnivores on property,” said Carnivore Curator Jason Ahistus. “We came up with functional situations, but as far as caring for the cubs, we needed something to put them in the best situation. We identified a new space, and then putting this whole process into action was great.”

In the fall of 2017, Fossil Rim held the “Cheetah Challenge” to raise funds.

“This is not something we could’ve done without the support of the general public through the Cheetah Challenge,” Ahistus said. “It allowed us to start the project via the construction of the perimeter fencing.”

The fall of 2018 marked another significant development in the process.

“For the remainder of the project cost, we received an amazing donation from the Eugene McDermott Foundation,” Ahistus said. “It provided the infrastructure inside the yard – the block building with water, electricity, heat, and air conditioning. We don’t need air conditioning for the adult cheetahs, but when you are trying to manage cubs and you have to lock them into a small space to protect them, having temperature control is crucial.”

Construction began on the block building and a holding yard in January 2019 and was completed in September.

“We have a small, fully-enclosed containment yard attached to the building to provide outdoor space 24 hours a day with protection from predators,” he said. “The cubs can walk in and out as they wish. We also have a larger containment yard without a roof.

“It’s the next step when the cubs have grown and are ready for a bigger space. Then, when they are old enough, they’ll have access to the full yard.”

Ahistus saw an opportunity to make the new addition more than just an improvement for cub care.

“Through the design process, we made some modifications as I thought more about how we were building this specifically for cubs, but there was an opportunity to make the area more versatile in its purpose,” he said. “If we have a cheetah that breaks a leg, for example, or has another major medical issue that requires it to be contained, now that cheetah can remain at our Cheetah Hill facility instead of having to move to our vet clinic. The animal doesn’t have to be separated as far from the other cheetahs.

“If we don’t have cubs or an adult with a medical issue, then we can still put this yard to use with a healthy adult. It could also be a birthing yard where we put a pregnant mother or a quarantine yard for incoming cheetahs. Every option is on the table.”

Ahistus explained why having the new yard within the existing cheetah facility is so crucial.

“It’s easier for us to manage the cheetahs when they’re in the facility, plus this will enable our animal health staff to provide an even higher level of veterinary care,” he said. “The yard is close to where our diet prep is done and where we spend a large portion of our time. We can constantly check on the cubs and don’t have to drive across the property or take time away from our other duties. Now, there is more overlap due to the proximity.

“When you are hand-raising cubs – which is never optimal but sometimes necessary, they need to grow up around other cheetahs. They need to see individuals of their own species, because the cubs will then exhibit more natural behaviors as they develop. It sets them up for better reproductive success when they reach adulthood.

“If you hand-raise cubs that don’t ever see other cats and only see humans, they tend to imprint on humans more and don’t know how to interact with other cheetahs, thus their reproductive success plummets. For this reason alone, this yard is a crucial addition to our program. I want to thank everyone who donated to the Cheetah Challenge, Mary McDermott and the Eugene McDermott Foundation for their generous donation, as well as all of our staff who did their part to help make this happen along the way.”

“To our support services staff, thank you very much to Daniel (Branham), Jerry (Monroe), Trent (Sandlin), Rowdy (Brown), Chris (Boyd), Scott (Moore), and Richard (Freeland) for staying with this and getting it done in the allotted time, way under budget, and with great teamwork and dedication,” Pienaar said. “The result is a finished product we are very proud of that looks just like the drawings.”

“Some of them have been with us a long time and have become part of the Fossil Rim family,” he said. “Thanks to Paul Phillips for the fencing, United Coop for the power supply, Brady from Excel Trenching, Keith Granath for the framing, Jose Espinoza for the cement and block work, Barry Merrill for the air conditioning installation, and also thanks to our own Gary Robinson in finance because he was always ready with a check to keep these subcontractors paid on time.”

Pienaar also gave a tip of the cap to the relevant suppliers.

“Thanks to Smith Supply for plumbing and electrical, Burly Fence & Hardware for cattle panels and fencing material, Riggs Machine & Welding for all manufactured components, Kelly-Moore Paints for the paint supplies, Acme Brick for the cement blocks, Mueller Metals for the steel and roofing, Ingram Concrete for the Redi-Mix Concrete, Mark from Henson Lumber, Troy from Walnut Springs Lumber & Hardware, Rental One, Home Depot, and a huge thanks to High Hope Ranch for lending us equipment that we didn’t have,” Pienaar said. “Most of these suppliers are in the local area and our success is important to them, since it keeps the local economy vibrant and strong. They celebrate with us in the completion of this successful project.”

Earlier in 2019, Fossil Rim reached a major milestone in surpassing 200 cheetah cub births since the program began in 1985. Fossil Rim has now produced 207 cubs. With a major new facility addition in the same year, the program is riding high.

“As a facility, we’ve been consistently raising our level of cub production,” Ahistus said. “With that comes more risk to cubs. The more litters you have, the more likely you are to hand-raise. It’s never something we choose to do; it’s medical management for their survival if the mother abandons the cubs or if they have major health issues.

“Now, we have a portion of the cheetah facility to meet these challenges properly. The more options you have, the better your management is going to be. With this new yard, we have a bunch of new options, so it’s going to allow our program to function more smoothly and efficiently.”