American Red Wolves Are A High Priority For Carnivore Dept 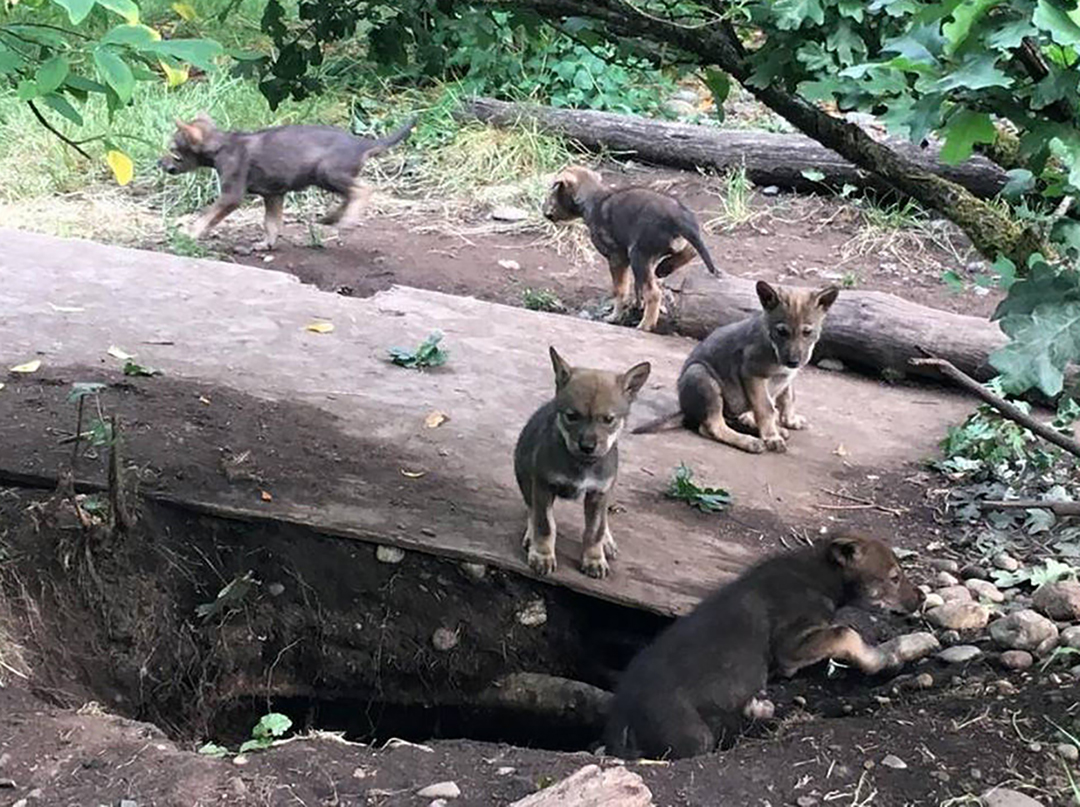 American Red Wolf Awareness Week, which falls on October 14-18 this year, provides a great opportunity to talk about the only carnivore that is solely indigenous to the United States.

Fossil Rim Carnivore Curator Jason Ahistus is more than happy to discuss red wolves every week of the year. The critically endangered species has long been very important to him personally.

“This is an important week, because it highlights the most endangered canid species in the world,” Ahistus said. “It’s a species that most people don’t know much about, but its native range included where Fossil Rim is now. At one point, red wolves could be found across one-third of the United States – throughout the Southeastern U.S. from Texas to Pennsylvania and as far south as Florida. Then, they were eradicated by people throughout their range.

“Once extinct in their native range, American red wolves were reintroduced into the wild in 1987 by the U.S. Fish and Wildlife Service at Alligator River National Wildlife Refuge in Eastern North Carolina, and they continue to live there. Not in the numbers that we want or are happy with, but it’s good that there are still wild wolves there. The goal of anyone who is an advocate for red wolf conservation is to increase the population and the space available to them.

“That could mean finding a new release site, continuing efforts in North Carolina, or both. We want to increase the recovery areas in their native range, which includes many different states.”

Red wolves play a key role in the ecosystem at the wildlife refuge where they roam free, and Ahistus said many ecosystems would benefit from their return on a larger scale.

“These wolves play such an important role in a healthy ecosystem, keeping different species populations in check, such as nutria, which are small mammals that are a nuisance species. Without the presence of red wolves, nutria have the opportunity to run rampant, which they do in a number of areas.”

In addition to damaging vegetation and crops, nutria – herbivorous, semiaquatic rodents reaching 14 pounds – can devastate the banks of ditches, lakes, and other water bodies.

“As an apex predator atop the food chain, when you remove red wolves from the equation, everything can get out of whack,” he said. “People need to be aware of that, as opposed to focusing on negative wolf stereotypes from pop culture and folklore. Instead, look scientifically at what the species does for its ecosystem.”

At a glance, a red wolf may remind some people of a coyote. If only the red wolf population was booming like that of the coyote, which is present in practically every city across the United States.

“Red wolves and coyotes are distinct species from one another,” Ahistus said. “They play different roles in the ecosystem. Red wolves are an apex predator that governs what happens in their ecosystem, keeping various species populations in check. A coyote is more of an opportunistic feeder and scavenger.

“Coyotes are 15-20 pounds smaller, but the coloration is similar. The red wolf had a role in the Southeastern United States. When they were eradicated, coyotes moved in and took over that area, but they aren’t capable of playing the same role in the ecosystem.”

What do red wolves eat at Fossil Rim?

Fossil Rim is one of 43 facilities that help comprise a captive red wolf population of approximately 240. More than 65 red wolves have resided at Fossil Rim and 31 pups have been born here since Fossil Rim became a member of the American Red Wolf Species Survival Plan (SSP) in 1989. There are approximately 25 red wolves in the wild, all in North Carolina.

“We currently have five red wolves – four in the (Jim Jackson) Intensive Management Area and one at the Overlook in our wolf enclosure,” Ahistus said. “We had our SSP meeting in July to make the breeding decisions for the population, and that included a couple of recommendations for us at Fossil Rim. We are going to send one wolf out to another facility and bring two wolves in, which will set us up with two breeding pairs for the 2020 breeding season. We are excited to get some new animals and pair them up to hopefully produce some offspring.”

Not unlike southern black rhinos at Fossil Rim, red wolf reproduction had proven difficult in recent years, but the challenge only strengthens the staff’s resolve to achieve success.

“Our last surviving litter was born in 2007,” Ahistus said. “We’ve had breeding recommendations here and there. Some pairs just don’t reproduce, whether it be for a health issue or some other reason. It’s not always about breeding; it’s about being able to have this species here so we can educate the public about them and help create space for the population.

“If we are not breeding and are instead serving as a holding facility, it means other facilities can pursue breeding opportunities. It’s a team effort, so it’s not necessarily all about what we do here.

“That’s an important point to make about those times when we serve as a holding facility for some species. No matter what, we’re still playing a role for the population.”

On October 12, HopFusion Ale Works in Fort Worth collaborated with Fossil Rim to present its new American Red Wolf Ale. Custom glasses were available for $3 and all fills were $6. Proceeds went to help the restoration of this species.

“HopFusion is my favorite brewery to visit in Dallas-Fort Worth, and they make great beer,” Ahistus said prior to the event. “They are interested in the work we do here, so it’s natural for us to build a partnership where we can help each other and do something good for the conservation efforts of different species. The red wolf collaboration is an exciting one to start with, because it’s a carnivore and obviously a favorite of mine.

“Going forward, there’s a lot of things we can do with different species and keep (HopFusion) involved in our conservation efforts, which is really cool. They went with the red ale because it’s an obvious choice to go with the red wolf. I’ll be there the whole time on Saturday, and we’ll also have other animal care staff in attendance like Adam Eyres and Tessa Townsend.”

If people are interested in learning more about red wolves, taking a Behind-the-Scenes Tour at Fossil Rim is a great place to start.

“Red Wolf Coalition really pushes conservation efforts and is a nongovernmental organization working specifically to save the red wolf,” he said, regarding an excellent example of another organization advocating for the long-term survival of red wolf populations. “I appreciate what all 43 SSP facilities are doing for this species.”

“We’ve been involved with red wolf conservation for 30 years now, and that’s a long time to show commitment and dedication to a species,” he said. “Red wolf conservation efforts coincide with everything our mission is about, so it’s a natural fit for the work we do as an organization. We’ve done some good things for the population, but we obviously want to do more. Personally, I love the species and I want to do whatever we can at Fossil Rim to help them out.

“We would love to increase our (enclosure) capacity so we can have more wolves here in both a breeding and holding capacity. The more space we can create for the species, the bigger our impact as a facility can be on the red wolf population and ultimately saving this species.”