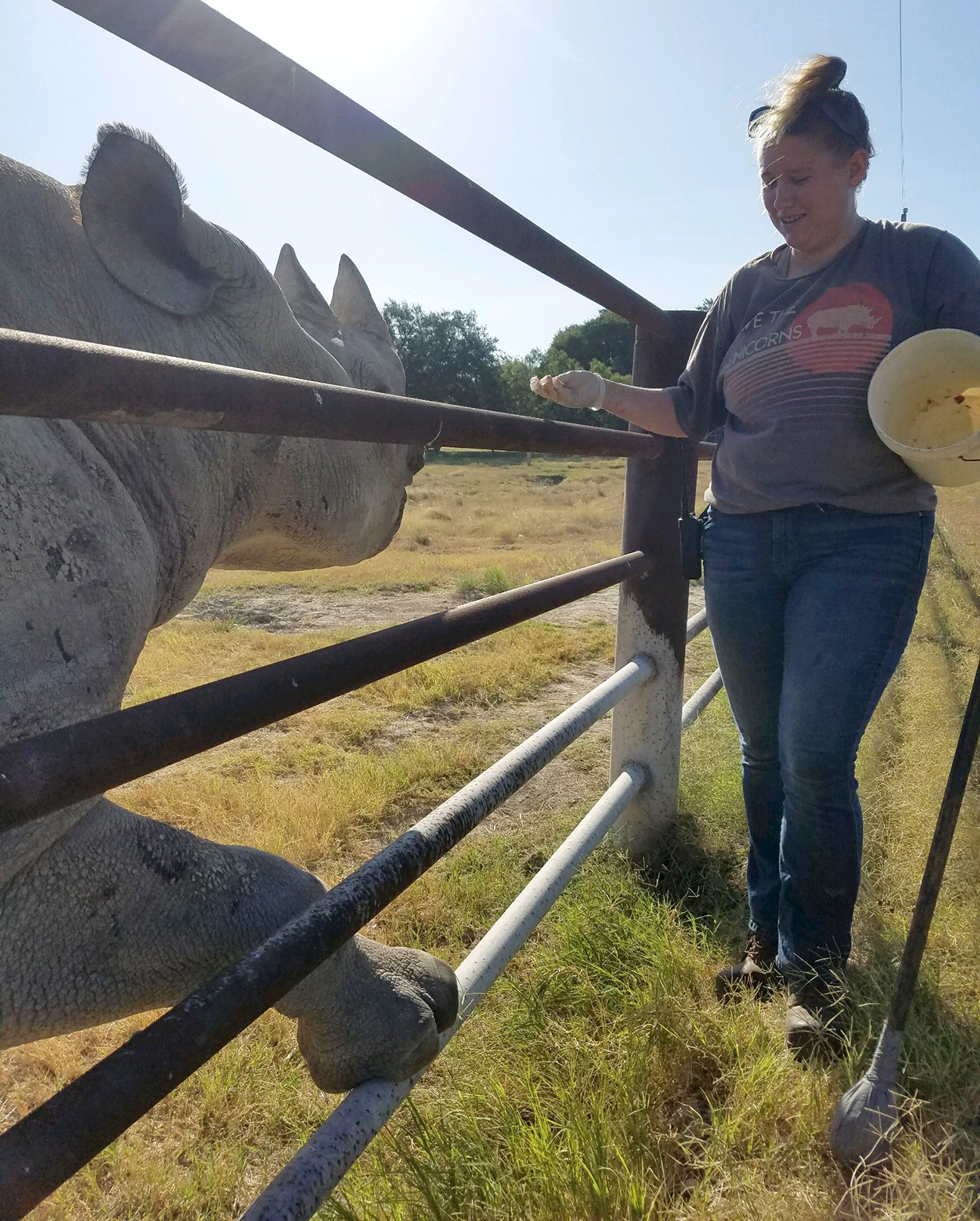 “One of the major characteristics of a black rhino is its prehensile upper lip as a browsing species,” said Butler, who received her bachelor’s degree in zoology and conservation science from Otterbein University (Ohio) and most recently worked in the “Heart of Africa” section of the Columbus Zoo and Aquarium. “Poaching and habitat destruction are the main issues for the decline in rhino species.”

“We only use positive reinforcement at Fossil Rim,” she said. “There are a variety of reasons for training, such as stress reduction, exercise, enrichment, safety, husbandry, and routine medical care. Examples of medical care could be tuberculosis tests, blood draws, and physical exams. Having rhinos trained for some basic behaviors can improve the management of the individual, as well as provide enrichment for the rhino.”

“’Bridge’ signifies to the animal that it has performed correctly and will be getting a reward,” she said. “Our bridge in this case is the word ‘good’. ‘Cue’ is asking an animal to perform a given behavior; our cue is the word ‘foot’.

“‘Jackpot’ means delivering a lot more treats for a behavior performed correctly. In this case, jackpot is a handful of sweet potatoes and apples. ‘Shape’ is gradually modifying the progression of steps to get to a desired result for the animal.”

Some command terms Salsa already knows include “come”, “move up”, “back”, “head up”, and “open”. Butler did daily training sessions so that Salsa could practice those commands.

“We are training for the foot behavior to allow easier access during blood draws, plus make it easier to check the rhino’s feet for any foot or nail problems,” she said.

When planning for an animal’s training, Butler explained the three main factors she considers.

“I like to look at the species as a whole,” she said. “What does that species naturally do that can make training difficult? What can help the training? Examples of these considerations are the size of the animal and how rambunctious it is.

“Next, I consider the animal as an individual. Each animal has its own personality; each one reacts differently.

“For example, Salsa gets nervous, and sometimes scared, when it is windy outside. Some animals are more motivated for training than others and have a longer attention span. Personally, I think Salsa is a lot calmer than the other black rhinos, but she doesn’t have as much of a drive for training as ‘Mupani’ does.

“Finally, I consider the (desired) behavior that I’m training for. How many people are needed and do we need tools? What time of day is best?”

Having considered these questions, Butler thought about what she wanted Salsa’s final behavior to look like.

“Ideally, I use the cue ‘foot’ and then she raises her foot onto the bottom bar of the fence,” she said. “She keeps it there until it is released by the trainer.”

After some revisions based on work with Salsa, her training plan utilized the target method, requiring two people and a target pole.

“I ended up using a nine-step plan in an attempt to reach the end goal,” she said. “I try to stay flexible, because a training plan isn’t set in stone. It can change depending on how fast the animal is learning.”

Butler wanted Salsa to lift her foot on command.

“I’d put the target pole down by her foot and cue her to lift it,” she said. “A second trainer would apply pressure to the back of her foot. If she lifted her foot, she was bridged and jackpotted. We did eight training sessions, each lasting 6-8 minutes, to get her to lift it on command without the applied pressure; she continues to do that now.”

At the conclusion of each session, Butler and the other trainer would discuss what went well and address concerns.

“For a while, Salsa was curling the foot up instead of lifting it straight up,” Butler said. “Then, she was just allowing us to manipulate the foot forward to the target pole, as opposed to moving it on her own. Ultimately, we decided to skip the foot forward step and pull her foot straight onto the bar.

“I’d cue her with ‘foot’, the second trainer would put it to the bar, and then we’d bridge and jackpot her when it went on the bar. Often, she’d keep her foot on the bar.”

One helpful observation was that Salsa seems to be a morning rhino.

“She wasn’t as focused during p.m. training sessions,” Butler said. “Also, too often she still allows her foot to be manipulated instead of placing it herself. Sometimes, she would anticipate me asking her to move up and reposition without me asking for the command. During training, when an animal does a command that you have not asked for, you want to ignore that behavior and not reward it so that it does not continue to happen.”

The challenges led to the decision to move the training into a chute.

“That way, she couldn’t move herself forward without being asked, but I could adjust her if needed,” Butler said. “Plus, the ground was more level in the chute area than along the fence line, which made it easier for the second trainer to lift the foot to the bar, which happened to be lower to the ground. We also moved (strictly) to a.m. training sessions, which seemed to help out a lot to make her calmer and more focused.”

Salsa’s training is ongoing, but she is headed in the right direction.

“This training remains a work in progress,” Butler said. “Salsa is still letting us manipulate her foot instead of doing it on her own, so we’ve decided to modify the plan with target pole training. We’ll do progressions of moving the target pole forward to eventually get her foot up to the bar without us touching it. We know the a.m. sessions are ideal, and we’ll try to complete the training in the near future.”

As Butler mentioned, each animal is different. The black rhino “Coco” responds to the command “foot” and places her foot on the fence bar accordingly. That increases blood pressure in the straight leg and makes the vein more prominent for the blood draw.

Butler thanked the animal care staff – specifically Adam Eyres, Justin Smith, and Tim Lloyd – as well as the veterinary staff, for their help with the training and her knowledge gained at Fossil Rim in general.

“Hopefully, future interns pick up at whatever point I end up with this project and continue training,” Butler said.

She made sure to show Smith and Lloyd exactly what she was doing every step of the way, and Butler’s efforts can definitely pay off in the long run, as Salsa continues to improve in her positive response to training.