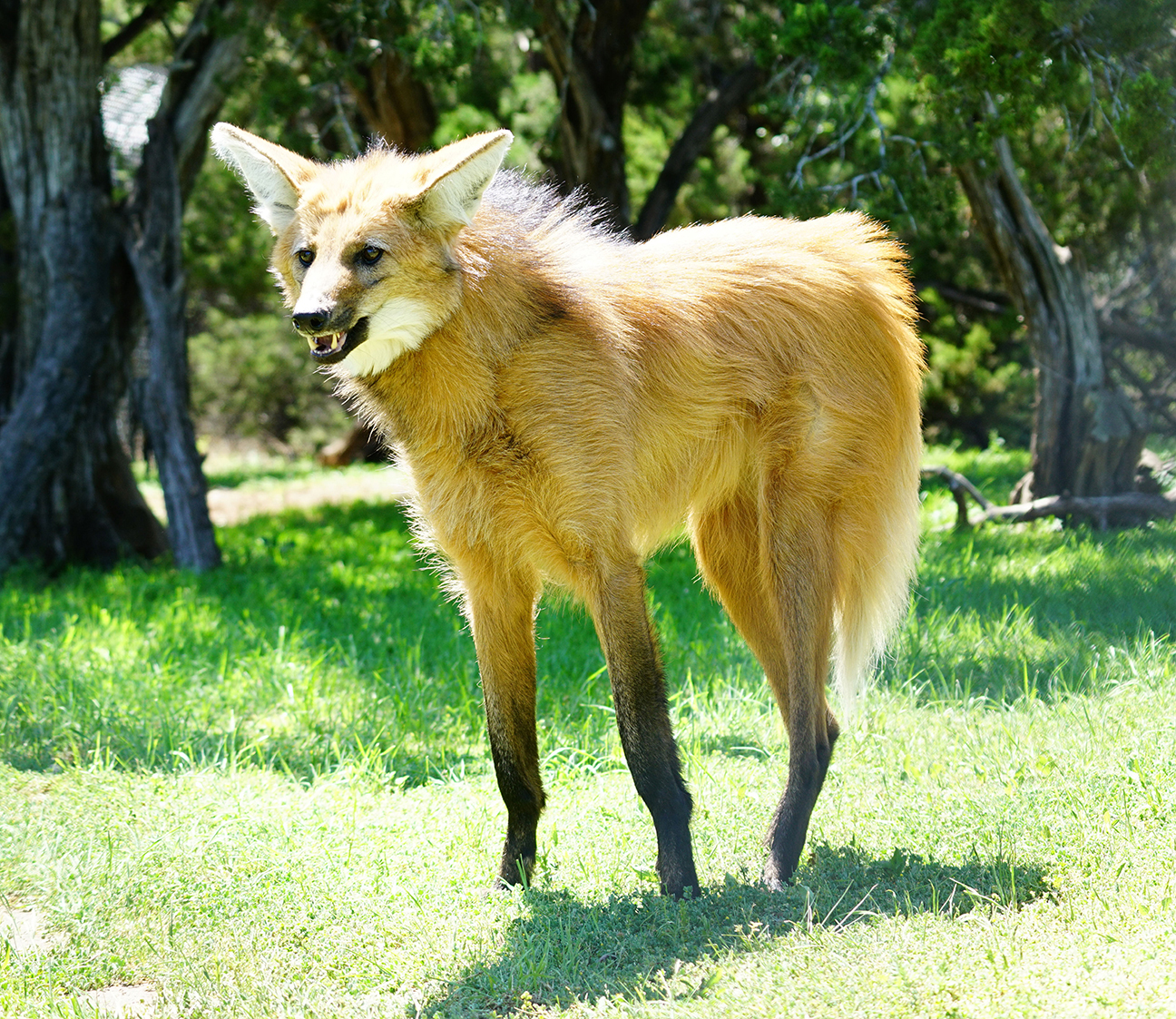 Every year on August 26, the world celebrates International Dog Day.

This occasion recognizes all dog breeds and serves to help galvanize the public to recognize the number of dogs that need to be rescued each year from public shelters. We may not exactly be home to dogs at Fossil Rim, but we definitely have some species that we can spotlight on this day.

Let’s learn more about those animals from Carnivore Specialist Tessa Townsend. First, she contrasts dogs to wolves, which in our case applies to American red wolves and Mexican wolves. Next, she delves into the world of maned wolves, which are actually unique and have many differences from wolves and dogs.

“Although domestic dogs and wolves share a high percentage of DNA, there are significant differences between the two. Physically, wolves have much stronger teeth for capturing and eating prey. Wolves also tend to have more pointed ears, as well as larger paws and more lean muscle.

There are key differences when it comes to intake of nutrition. Dogs have evolved as omnivores to eat more similarly to humans. Wolves are true carnivores with gastrointestinal systems that can process raw meat and go longer in between meals.

Wolves know they’ll most likely have to wait a long time before their next meal, so they gorge themselves when they do have food opportunities. They can eat up to 20 pounds in one sitting, whereas dogs typically eat a cup of kibble in the morning and another cup in the afternoon.

Significant differences among wolves and domestic dogs occur behaviorally. Dogs rely heavily on humans and have evolved to the point that they cannot adequately survive without us. Wolves, on the other hand, are wild and can fend for themselves.

Breeding and pup care is another key difference. Domestic dogs can breed several times throughout the year, whereas wolves only breed once a year. Additionally, wolf litter sizes average 4-5 pups and are typically smaller than the domestic dog average litter size of 5-6 pups. Although wolf pups and domesticated dog pups are both weaned at about two months of age, wild wolf pups mature much faster in order to be able to survive in the wild.

Domestic dog pups certainly have an easier life, since they can depend on humans to care for them through all stages of growth. In a wolf pack, pup care and nourishment is given by both the pack mother and father, and potentially even older siblings, if the pups have them. Domestic dog pups are typically given care and nourishment from only the mother.

Maned wolves are canids, so they do share similarities with wolves and domestic dogs. However, they are a unique species and have many differences, too. Physically, these tall, lean and orange animals look very different from wolves and dogs.

They are more physically comparable to foxes – just a lot taller. Maned wolves also have fused third and fourth digits, which gives them a unique footprint. They are omnivores, as half of their diet is plant material and the other half is meat. 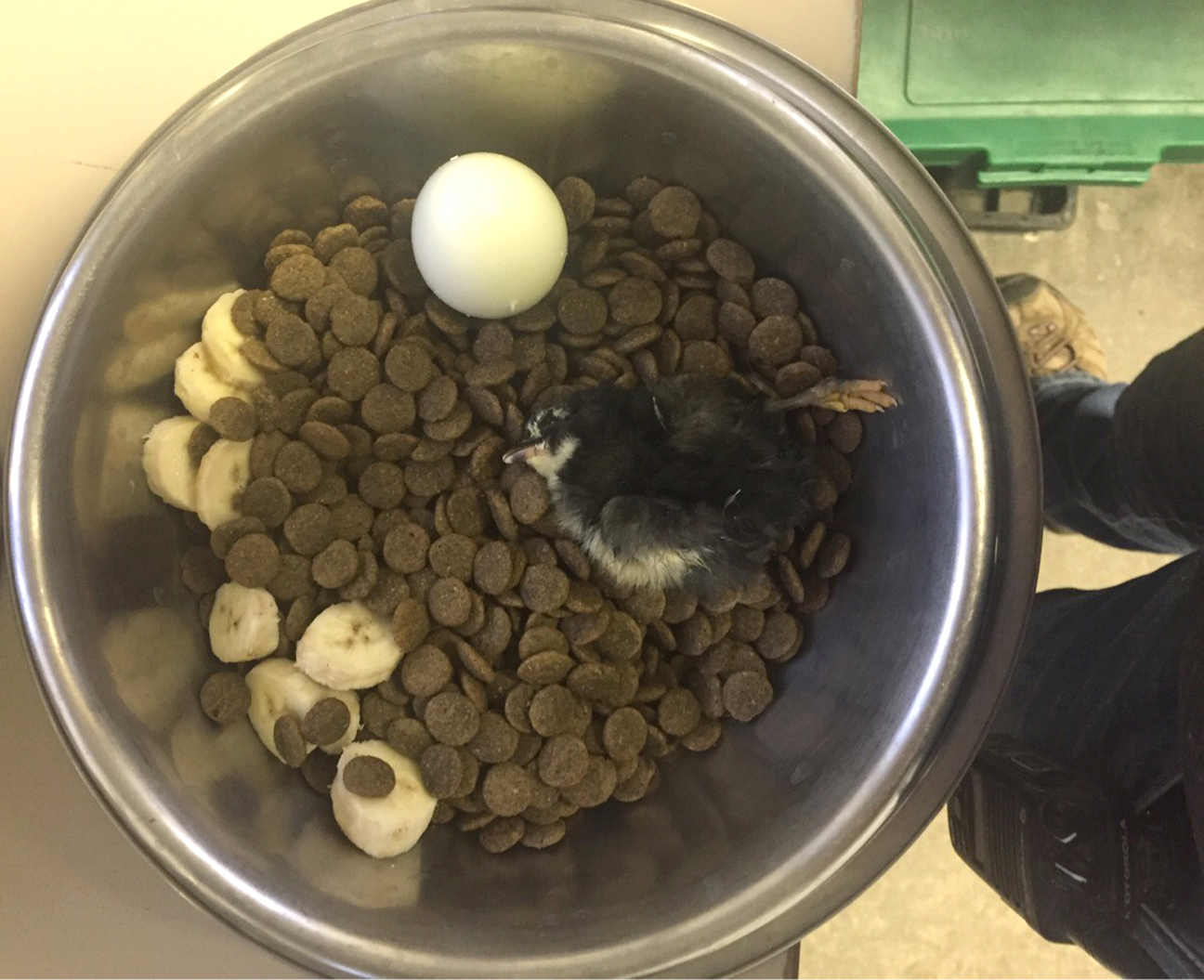 Their native land in South America provides them with a fruit called lobeira, which makes up a large portion of their diet. This fruit is so unique to maned wolves that it has become known as the ‘wolf apple’ or ‘wolf fruit’.

Maned wolves also differ from wolves and domestic dogs in their social behavior. They are solitary animals and only partner up when they breed and raise offspring. Similarly to conventional wolves, they only breed once a year, but do breed in different months; red wolves and Mexican wolves breed from February to March, while maned wolves breed from late September to early January.

Lastly, maned wolves have a different stride than most canids. They pace, which means they bring both their front and back legs on the same side of the body up simultaneously, alternating sides like a horse. This movement allows them to travel through long grass that they inhabit more efficiently.”

All three of these species can potentially be visited at Fossil Rim on a Behind-the-Scenes Tour.