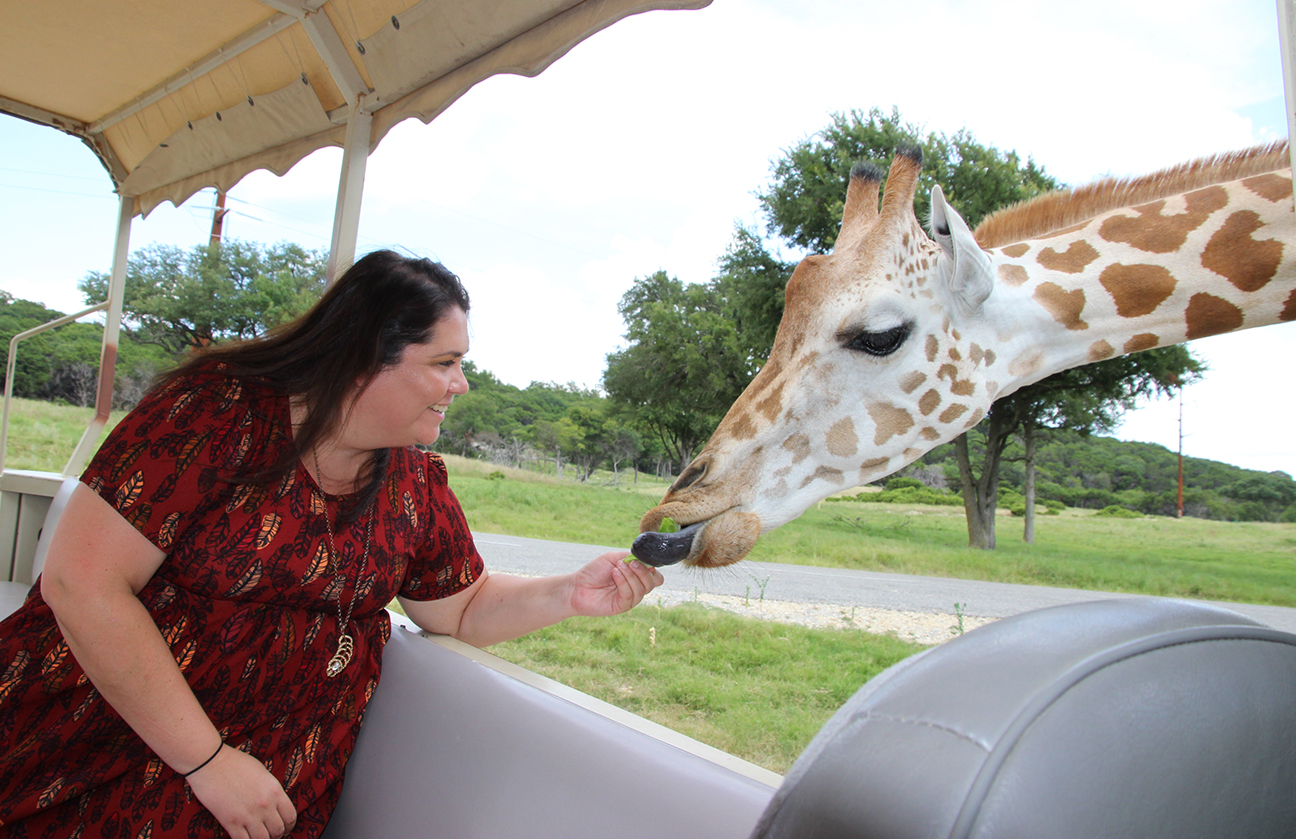 Jennifer Smith hopes to ensure that Fossil Rim can set lofty goals and make them become a reality.

The native of Treasure Island, Florida is the new Fossil Rim Director of Development. Her most recent fundraising efforts benefitted the Humane Society of North Texas in Fort Worth, and Smith is now commuting from Fort Worth.

“I definitely wanted to expand my animal experience and dive into a different aspect of that world using what I’ve learned,” Smith said. “This is an opportunity to bring my career to the next level.”

Smith attended college at Auburn and then Florida State, graduating with degrees in political science and sociology. From there, she moved to Fort Worth.

“After graduating from Florida State, I wanted to make the move to Texas,” she said. “DFW (Dallas-Fort Worth) has a thriving economy and continues to grow, plus that put me within driving distance of my mother in San Antonio.”

Adversity led Smith toward the fundraising realm. She was very close with her father, as they shared a love of sports. While she attended college, her father was battling cancer and she traveled to see him as often as possible.

“My world was shattered when my father passed away,” she said. “I developed a passion for raising money to fight cancer. Our sorority at Auburn, Gamma Phi Beta, had adopted the American Cancer Society as our project charity, and I was consumed with working for that cause. I became chairman of Auburn’s Relay For Life Sponsorship Committee, and I’ve worked in nonprofit fundraising ever since.

“I love to support charities of all sorts, but inevitably people are going to be connected to the ones they are most passionate about. Animals and cancer research will both always be very important to me, based on my previous experiences.”

Early on in her Fossil Rim tenure, Smith discussed a prime objective.

“One of the major goals I was focused on from day one is building a new veterinary hospital to support the growing medical needs and basic care for the animals,” she said. “It’s a large-scale project, but much-needed. It’s exciting to work toward something that can help continue the research and care of the animals to ensure their future. That calls for a lot of money to be raised, yet I’m confident that we will be able to get it done.

“Early in the process, it’s about identifying key corporate and foundation partnerships, both locally and nationwide, where we fit underneath their pillars for donations. Also, cultivating our long-term donors and building public interest in this project are key.”

She has some other items in the works, as well.

“Some other things I could mention now are an event with D’Vine Wine in Granbury, as well as a fundraising 5K run,” she said. “I also want to host a gala to get our top supporters in one room and let them know exactly where their dollars are going. I hope to grow the development team and bring on some seasoned development staff to help with fundraising, grants, and some special events to increase public awareness about all the good work being done here and how people can support it.”

Smith is already joined by Karen Adams, who works in both the development and membership departments.

“Coming on to work with someone who has been here 10 years, Karen is definitely going to be a great resource for me,” she said. “She has worked in development, membership, and on special events, so she is someone I can go to with questions. Plus, Karen let me know she is willing to incorporate some changes for the greater good.”

When she is not at the wildlife center, Smith loves spending time with her dogs “Rudy” and “Remington”. She is also a football and beer enthusiast.

Thus far, her favorite Fossil Rim animal is the cheetah.

“I really appreciate the success of the cheetah breeding program here, plus with my background at the Humane Society I have a fondness for the animals similar to cats and dogs,” she said.

Smith believes the compelling subject matter Fossil Rim provides will aid her cause in the development department.

“I definitely think, through the progression of social media, that people of all generations are learning how the environment is impacting animal species and their survival,” she said. “People are interested in the subject matter at Fossil Rim. Donors and members can make a difference in our conservation efforts so that their children’s children can still see these species walk the face of the Earth.”

To contact Smith in regard to Fossil Rim’s fundraising efforts, email development@fossilrim.org.

“I’m excited to be part of the Fossil Rim family and achieve big fundraising goals,” she said. “I’m determined to be the one to ensure that happens for Fossil Rim.”