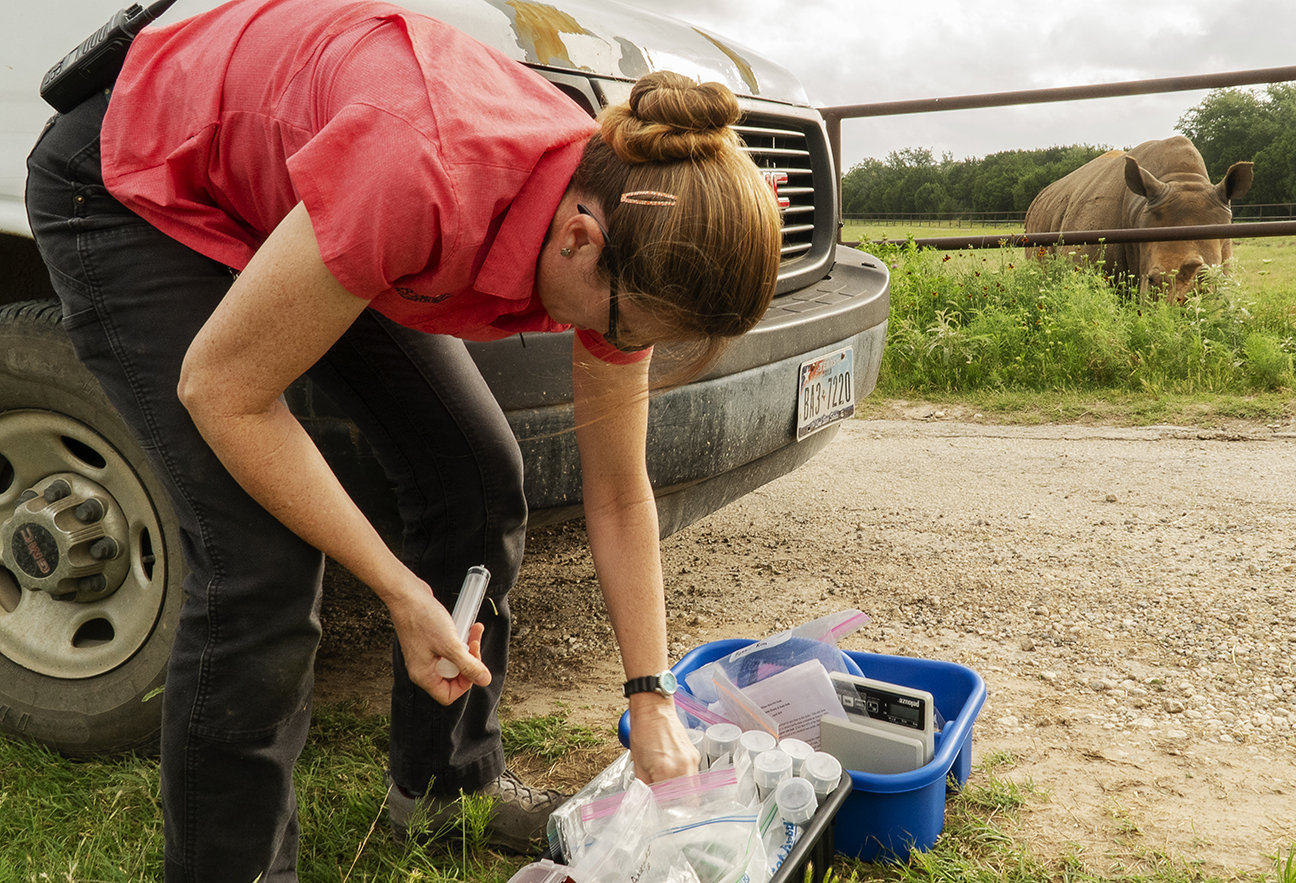 Fossil Rim Wildlife Center is a diverse organization, perhaps more so than many people realize.

“Fossil Rim Wildlife Center is dedicated to the conservation of species in peril, conducting scientific research, training professionals, responsible management of natural resources, and public education.” That is Fossil Rim’s stated mission. As director of animal health, Dr. Holly Haefele is also in charge of all scientific research at the facility.

“Fossil Rim does conduct scientific research as one of our five mission pillars,” Haefele said. “We are selective about the kind of research we get involved in, because we want it to have direct implications – either on captive management and health of the species we’re involved with, or have direct conservation value for those same species.”

North Carolina Zoo reached out to Fossil Rim for help with a study that analyzes the pharmacokinetics (movement of drugs within the body) of phenylbutazone in white rhinos. But, how does Haefele decide if Fossil Rim should participate in a research project?

“We get many proposals to collaborate on research, but we also generate some of our research projects in-house,” she said. “If a project involves physical interaction with a given animal, such as taking blood or perhaps an immobilization, we go through a process where we have a group – the Institutional Animal Care and Use Committee – that reviews the proposal to make sure that it’s something Fossil Rim wants to be involved with. A great example of an in-house project is Tim Lloyd’s addax reproduction study that he discussed this spring, as well as the animal health department’s anesthesia protocol study that coincided with his project.”

Haefele then used the phenylbutazone project proposal to further explain the review process. For the purposes of this article, phenylbutazone will sometimes be referred to as “bute”, since that is what it is called informally by the staff. 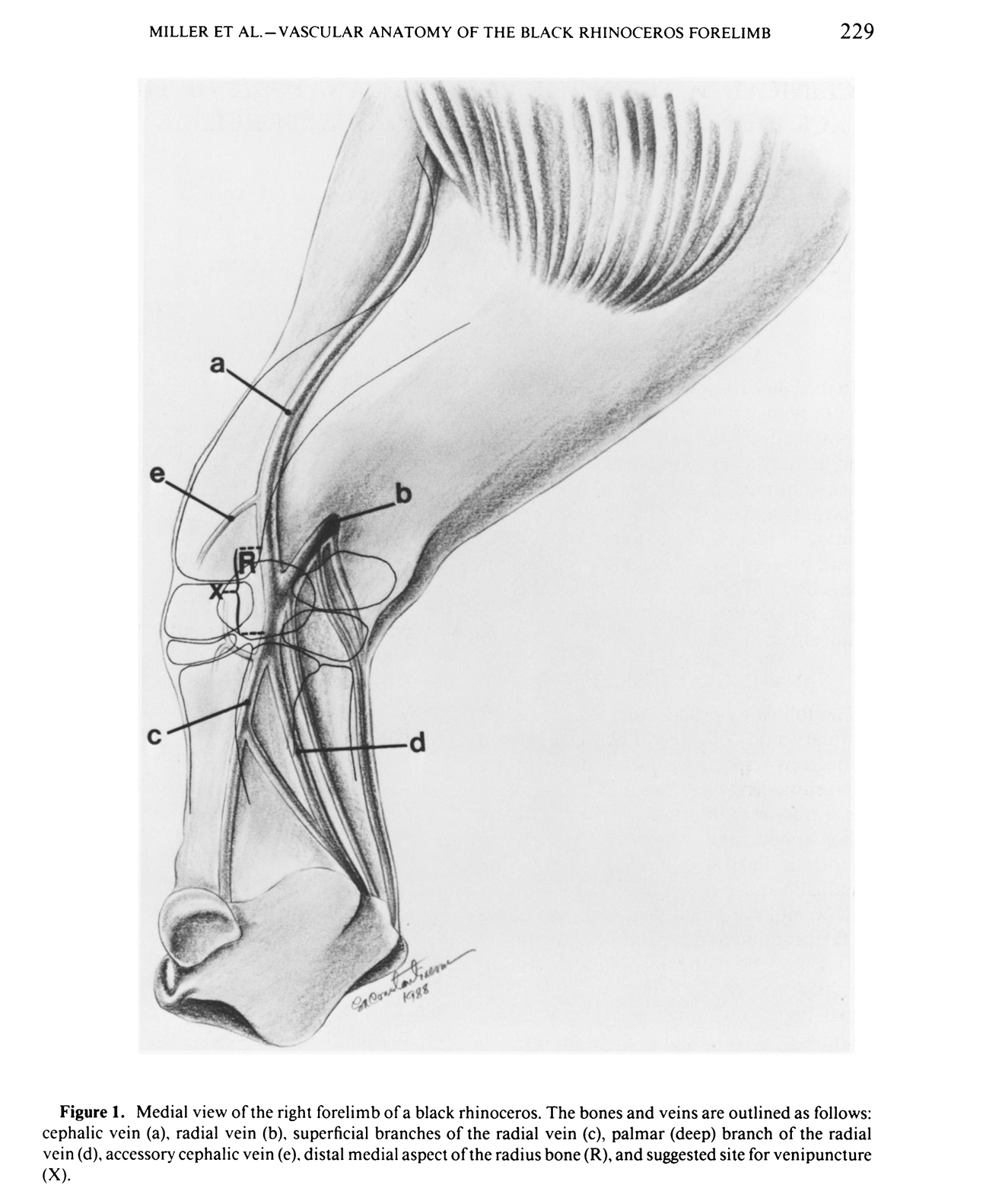 “When we were contacted by the North Carolina Zoo to be involved with their phenylbutazone study, we went through that process,” she said. “As the research coordinator, I get the proposals and do a quick assessment to see if it’s even feasible. I know that our white rhinos are fairly easy to draw blood from, so this proposal cleared the first step. Then, I talk to the animal care staff to make sure it’s not too great of a time commitment and that the staff will have enough (hands on deck) to cover the project assistance that might be needed.

“At that point, the proposal is presented to our leadership group that extends beyond animal care and animal health. In the case of this study, the answer was a pretty easy ‘yes’ at all levels.

“A lot of facilities use phenylbutazone, which is a nonsteroidal, anti-inflammatory drug that also relieves pain in rhinos, but there has never been any pharmacological studies done on them to say, ‘Yes, this dose achieves this amount of circulating drug, which should be therapeutic.’ We think it works, based on clinical experience, but we would love to be able to scientifically say the particular dosage that works well.”

Haefele said bute is used often at Fossil Rim, when needed. It works for any hoofstock species, but is most commonly used for rhinos. Six of Fossil Rim’s white rhinos are involved in the study – all but the two calves – and each rhino will receive a single, oral dose of bute.

Each rhino’s involvement will last for two days. There will be an initial blood sample taken before the bute is administered, in order to develop a baseline for that rhino. Then, three blood samples will follow at some point during the next 48 hours. Each rhino in the study – at Fossil Rim and other institutions – will have a different set of three intervals for their blood draws.

“This project assumes that all of these rhinos are pretty similar, so you don’t have to do blood draws on all the rhinos at the exact same time,” Haefele said. “Each rhino in the study has a different set of hours for the blood draw intervals. That way, all 48 hourly intervals are covered for the two days, and some intervals will be covered by multiple rhinos.

With data incoming for each of the 48 hourly intervals, it should help researchers nail down the ideal circumstances to administer bute.

Instead of addressing all six rhinos during the same week, the animal health and animal care departments deal with two rhinos per week over the course of three weeks.

“You have to consider what is practical for these research projects,” Haefele said. “We didn’t administer bute to all of our rhinos at the same time because we have a lot of other items on our daily agenda, as well. Feasibility is a key part of research.” 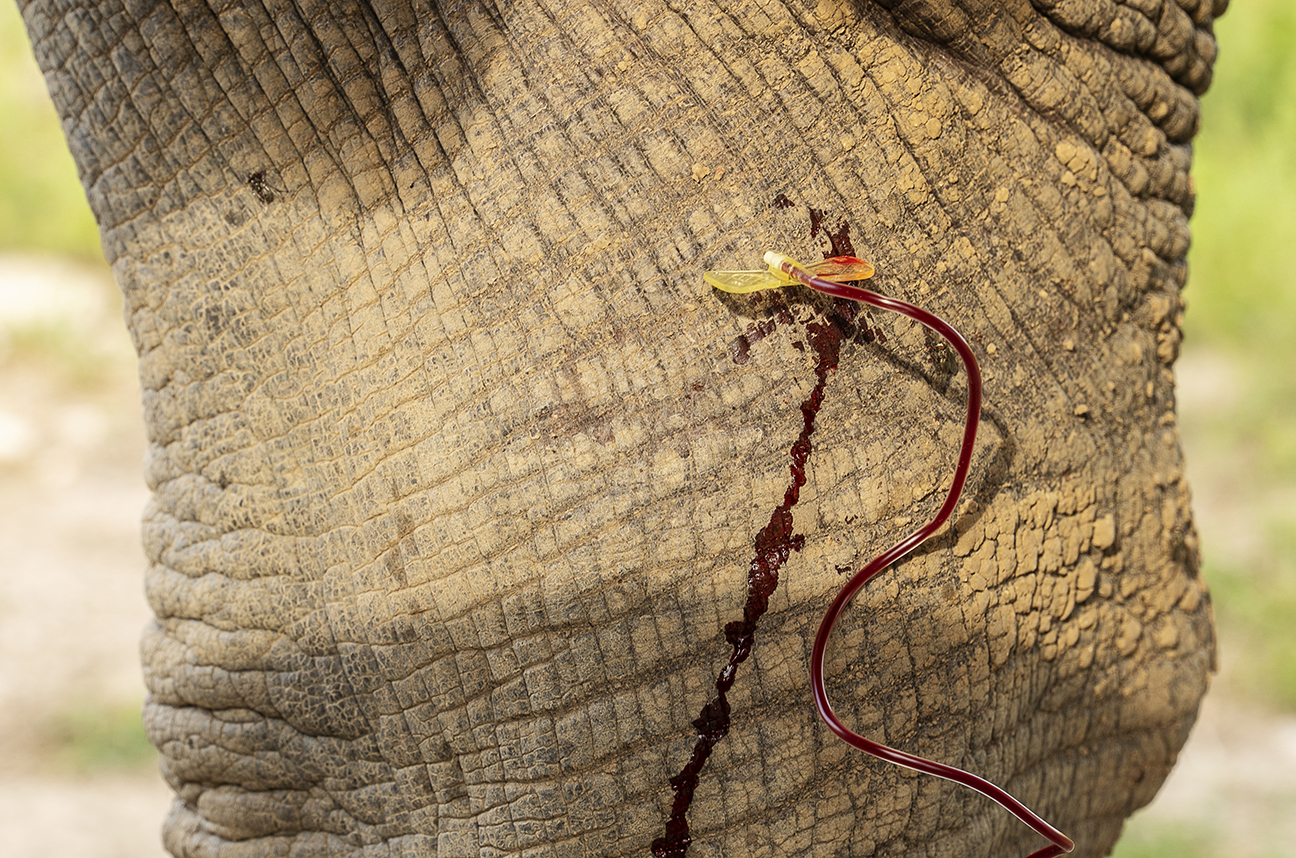 As far as who was involved in the blood draws for each of the rhinos, there was one recurring figure with other people mixing in as needed.

“The white rhinos are rewarded positively when they do what we want them to do,” Haefele said. “We only draw their blood once a year, unless otherwise needed, but every time we visit them, we can give them positive reinforcement. White rhinos don’t have a formal trainer, such as our black rhinos have with the black rhino interns, so (animal care staff members) Justin (Smith) and Tim (Lloyd) would be the ones who are filling that role. Most rhinos really like alfalfa, so we bring it with us for blood draws.

“They also get rubbed and scratched, which usually keeps them pretty occupied. Justin is the main person involved in this study, because he is representing animal care by handling the rhinos.

“One of the vets draws blood, and then it could be anyone helping with the rest. It needs to be somebody who can distract the other rhinos, plus someone else to help Justin rub the one that we’re working on.

“They have a big radial vein that runs over the inside of their carpus – equivalent to our wrist – that is usually pretty easy to hit with a needle. Justin is good at getting the rhinos to take that perfect half-step so the vein is accessible. Most of the rhinos don’t care; they are focused on attention and treats – in this case, alfalfa.”

Black rhinos at Fossil Rim, though not involved in this study, are trained year-round by interns for blood draws and several other behaviors, including opening their mouths for visual exams.

“More than anything else, it’s a matter of personality,” when Haefele was asked if black rhinos are easier to draw blood from than white rhinos. “In general, the white rhinos are easier to deal with, even though they have less training, because their species is more easy going. If you consider the black rhinos individually, ‘Mupani’ is very calm for blood draws, but we tend to have a hard time with ‘Coco’.”

Fossil Rim will wrap up blood collection for the study in mid-June.

“We freeze our samples here at -80 degrees Fahrenheit, and then they will all be sent together to the North Carolina Zoo,” Haefele said. “They will run all tests there at the same time to limit variation.”

From the North Carolina Zoo perspective, researchers there are accepting the rhino blood samples from March to July. Lab analysis will be done from July to December. The zoo’s researchers will present their findings from the study in the fall of 2020 at the American Association of Zoo Veterinarians Conference.

“A lot of the projects we do are collaborative, and it’s why the North Carolina Zoo reached out, because to get statistically significant data, you need significant numbers of animals involved in a study,” she said. “That calls for multiple institutions to combine to reach the total number of rhinos the zoo wanted for this study.”

Some of the research Fossil Rim is involved with does not require an approval process of any kind.

“If we are just going to use banked serum that we already have from an animal, or maybe we are just accessing medical records, then the approval process I discussed isn’t needed,” Haefele said.

Because she oversees all the research that goes on at Fossil Rim, Haefele estimates that 15-20 percent of her time is devoted to research matters. Sometimes, these research projects can take on huge significance, both for the species of the animal involved, as well as the people involved in the study.

“The types of projects we like to get involved with are those with tangible impacts,” Haefele said. “The GPS collaring of scimitar-horned oryx here in 2015-16 and the behavioral results analyzed before the collars were used in the reintroductions in Chad was an ideal example. You can draw a direct line between the work done here to the reintroduction program there, as the study here concluded there would be no issues for the oryx to wear the collars in Africa. Another nice thing about that study was the collaborative aspect with other institutions, where we can all address our areas of expertise to make a better project.

“Also consider that Stephanie Cunningham, the behavior research – hoofstock intern here for that study in 2015-16, went on to do her master’s involving the data she collected and is now working on her PhD, continuing on with more data collected from those collars. That study snowballed into a major deal for Stephanie professionally.”