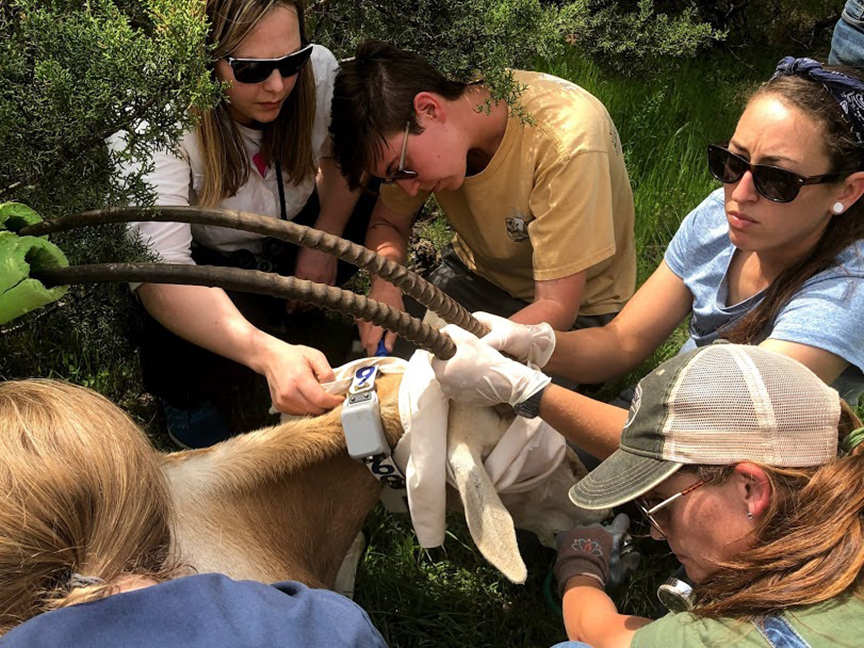 Scimitar-horned oryx and the collars some of them wear at Fossil Rim are back in focus, but several details have changed from a few years ago.

Longtime Fossil Rim supporters may recall a study conducted at the conservation center in 2015-16 about the effects of GPS collars on scimitar-horned oryx (SHO) behavior. If not, check out this blog about Stephanie Cunningham, former Fossil Rim behavior research – hoofstock intern, and her study for a refresher: https://tinyurl.com/y2flda57.

Flash forward three years after Cunningham departed from Fossil Rim, and now it was Sam Goss who stepped in as behavior research – hoofstock intern with a study of his own. It still involved the effects of GPS collars on SHO, but these collars have some added elements.

Goss was at Fossil Rim from Feb. 25 to May 18. The native of Coral Springs, Florida graduated from Smith College in Massachusetts with a bachelor’s degree in biology. Goss discussed this 2019 study in relation to the one Cunningham began in 2015.

“I performed the same check-in as that study, because we want to know if these collars are altering behavior or having any negative impact,” Goss said. “These video collars are heavier than the GPS collars of the 2015 study in terms of having 70 percent more mass. That sounds like a (drastic increase), but both types of collars are still under one percent of a scimitar-horned oryx’s body mass. These collars are much more pendulous with the weight point down at the camera, so we need to determine if the oryx still have their free range of head movement.

“I absolutely looked at Stephanie’s presentation of her project and all her related write-ups. Stephanie concluded in her study that there were significant differences found in activity and grazing after the collars were applied, but those changes dissipated after a maximum of five days. Other changes dissipated within hours.

“The collars in Stephanie’s study were strictly GPS location. These collars in my study have GPS, plus the video camera and an accelerometer, which can clock speed and even record if an oryx is tossing its head around a lot.”

While most animal care interns create their own projects while they are at Fossil Rim, behavior research – hoofstock interns like Goss know exactly what they will focus on ahead of time.

“Fossil Rim was looking for someone to do this specific project, so I applied for it,” Goss said. “Other animal care interns create their own project, and taking care of animals is their primary function. For this one, the research comes first and animal care is secondary. I’ve tried to make it 50-50, and so I still learned a lot about animal care.

“(Director of Animal Care) Adam (Eyres) and (Director of Animal Health Dr.) Holly (Haefele) have been my advisors for the project, as well as (Smithsonian Conservation Biology Institute Postdoctoral Research Fellow Dr.) Katherine (Mertes). I stayed connected with them on the research front about how it was progressing. I was mostly working with (Fossil Rim Animal Care Specialists – Hoofstock) Becca (McLachlan) and Ben (Jernigan), as far as riding along for hoofstock care and helping them feed the pens (animals).”

Goss shared the details of the research study and how he went about daily data collection.

“The study objective was to make sure there were no negative impacts or altered behaviors imposed by these collars on the oryx,” Goss said. “If that proves to be the case, we do want some oryx being released into Chad to wear these collars, hopefully beginning in 2020, which will expand the scope of monitoring data. We have our control group of three females without collars and the experimental group of three females with collars. Each female had a corresponding female of similar age in the other group.

“The only animal without a control equivalent was the lone male – 774 Blue. He lives in the Retirement Pasture and wore his collar there, because we still wanted to learn whatever we possibly could from him, whether the circumstances were ideal or not.”

“I recorded when each observation happened in my journal, as well as the weather conditions,” Goss said. “I also recorded passing vehicles and other activities going on nearby that could even potentially make the oryx skittish. As far as what each oryx was actually doing, that will be analyzed with software at SCBI (Smithsonian Conservation Biology Institute).”

“We won’t necessarily analyze the final week; I’m just doing it as a general welfare check to make sure there are no drastic differences with the collars removed.”

Not unlike how the interns at Fossil Rim who work with Attwater’s prairie chickens are extremely busy, time management became crucial for Goss. Five days per week included 10-hour workdays.

“I tried to take care of data organization and proper labeling during my lunchtime,” he said. “If it ever did pile up, I’d take Monday as my designated office day, assuming animal care didn’t need any extra help. I did six days of observation per week and five days of animal care duties.”

As Goss previously referenced, the project setting now shifts to SCBI for data analysis. In fact, when he left Fossil Rim, it was straight to the airport to fly to Washington D.C.

“This was just the data collection portion,” he said of the time at Fossil Rim. “I’ll be analyzing the data, running it through the ethogram software, and conducting the statistical tests at SCBI. There can be no conclusions right now. I expect to be at SCBI for three months in the analysis phase working alongside Dr. Mertes.

“There are about 275 videos and over 45 hours of observations. We are also excited to learn from the data that we will pull from the collars’ cameras, because we’ll look at the video and photos.

“What species are the scimitar interacting with, what are the social dynamics within the herd, what habitats do they prefer? There is a lot to learn here just from the data the animals themselves have collected.”

As one might expect, Goss is honored to be working with a branch of the Smithsonian, which is the world’s largest museum, education, and research complex.

“It’s crazy to be able to say that I’ve worked with the Smithsonian Conservation Biology Institute, which is obviously a prestigious organization,” he said. “There, I will be doing analysis of the video collected at Fossil Rim, but without an animal care portion. I’ll be sad to let that (aspect) go.”

Prior to the Fossil Rim term, Goss was well-traveled for nature-based pursuits.

“Before coming to Fossil Rim, I was working for the Oregon Department of Fish and Wildlife in the summer and winter working with salmon,” he said. “I’m a big fan of the lifestyle that comes with being a wildlife researcher in these seasonal field tech positions and the places it takes me. Ecology is my life, so I’m enjoying every moment of it.”

Other previous stops Goss mentioned were at the National Oceanic and Atmospheric Administration in Washington working with oyster aquaculture and eelgrass beds, Massachusetts for salamanders and later for intertidal snails, and Queensland (Australia) for yellow-bellied gliders.

“One of the big draws of this internship was the opportunity to do research and data analysis again, because I hadn’t done that since college,” Goss said. “I am planning to eventually go to grad school and get my master’s, which will include a research project and data analysis. This experience is very much a step in the right direction for me, and the prospect of a career in research is something I’m very interested in. I just want to keep doing ecology fieldwork in the meantime, because I enjoy it so much.”

The Fossil Rim experience was new to Goss on multiple fronts.

“This was my first time to visit Texas, plus this was my first research that wasn’t through federal or state departments, or my college, but instead at a zoo or safari park,” he said. “It’s been an incredible eye-opener in terms of what these facilities do for conservation, and I feel like it was very important for me to come to understand that. With that being said, I’d never done any type of animal care. This was a great life experience that will make me more well-rounded.”

Goss felt a bit guilty admitting that SHO are not his favorite Fossil Rim species.

“I adore the (mountain) bongo, kudu, and aoudad,” he said. “Another thing I learned from this internship is that I am more geared to studying non-mammals, but this was my first chance to find that out, and it doesn’t take away from what was a great experience here. I think this is an incredibly surreal place; my backyard has wildebeest in it. I’m about to leave, and that aspect still hasn’t become normal – I’m going to miss it quite a lot.”

As this research adventurer turns his attention to the extensive video analysis at SCBI, Goss won’t forget the people who helped out during the busy two-and-a-half months at Fossil Rim.

“I’m so grateful to everyone here – the vet staff and the hoofstock department – to be flexible with me so I could organize my data and for letting me help them in animal care when I was able,” Goss said. “They were the reason the collaring could happen in the first place. All of those people are very fun to work with.”

When the data analysis portion of this study wraps up later in 2019, Fossil Rim will provide an update as it relates to the ongoing SHO reintroduction in Chad.