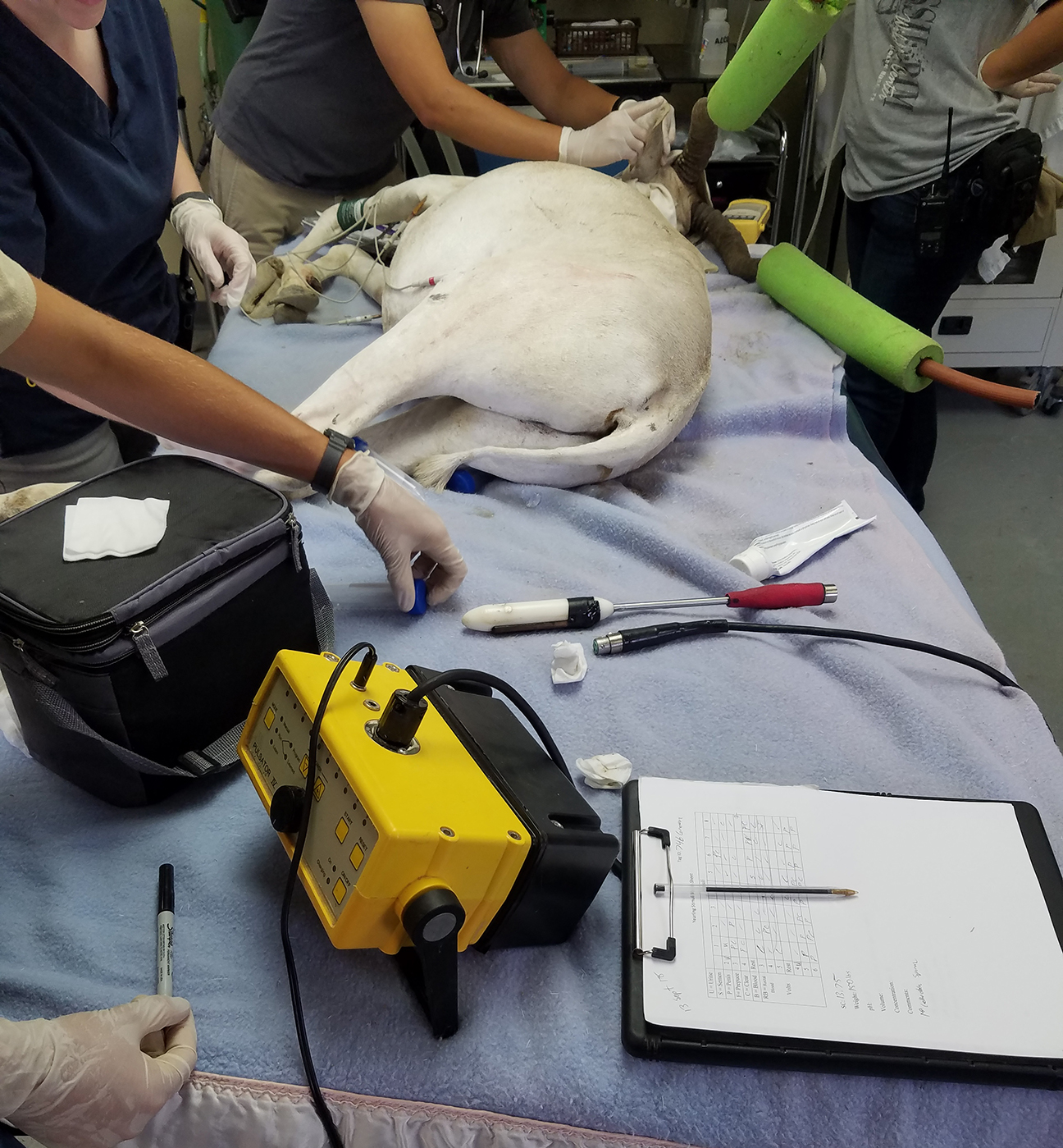 When trying to nail down a project topic while working toward his master’s degree from Tarleton State University, Timothy Lloyd was motivated to investigate an issue with real-world application.

Better yet, as a hoofstock animal care specialist at Fossil Rim, how about a project with direct relevance to the wildlife center where he works?

“My project was about studying the sexual maturity of male addax, trying to determine at what age they begin producing and ejaculating sperm,” Lloyd said. “That information will allow the animal care staff to know the best time to remove a particular addax from the herd, know when it is capable of breeding, plus I expected to gain some more general information about the species in the process.”

With the support of the animal care and animal health departments, Lloyd’s project began with the removal of 13 addax males – each close to one year old – from Fossil Rim’s herd via immobilization.

“From the age of one to two years old, I did a series of four sperm collections for each of the addax,” Lloyd said. “Every three months, I wanted to find out if each addax was producing sperm, measure its scrotal circumference as compared to its body weight, and measure blood testosterone levels. More generally, determine if each addax was in the range of being able to successfully breed at the four sampling time points.

“If sperm were present during a collection, I took a morphology stain to look at it closer and verify if they were mature yet or still immature. I used an electroejaculator and tried various techniques in search of the best method of stimulation and successful sperm collection. One of the end goals was to make sure this is a viable, dependable process.”

Lloyd explained how he arrived at this particular project.

“This topic of study was agreed upon by me and the Fossil Rim staff, because they are also interested in the findings as a facility with resident addax,” he said. “I wanted to collect as much information as possible to answer questions Fossil Rim currently has, plus this is a great opportunity for me to gain a greater understanding of exotic hoofstock reproduction.”

He discussed the process for each of the four collection increments.

“Each individual was anesthetized via dart,” Lloyd said. “Then, that addax was brought into the vet clinic, weighed and intubated. I measured the testicles and their growth during each of the four collections. The electroejaculator is used rectally, along with a compatible ram probe, for effective stimulation and collection (respectively).

“During the study, we discovered how to improve the electroejaculation collection system. I would alter the placement of the ram probe and see how collection was affected. Did we get urine contamination in the sperm sample and did we get sufficient stimulation?

“I took the collection into the lab and looked at it under a microscope for the presence of sperm. If sperm were present, were they still viable (alive or dead)? The volume of ejaculate was recorded for each collection.”

Lloyd gave an honest assessment of the process as he reflected on the previous year of study.

“I believe the project answered some questions, but created others,” he said. “Thirteen males in a bachelor herd – is that a healthy way to raise them? By the end of the study, we still hadn’t gotten a viable collection from some of the individuals even as they approached two years of age. Competition for nutrition could’ve been an issue, so should each addax have been housed individually?”

If this sperm collection process is honed over the course of future attempts, Lloyd explained how theoretically beneficial it can be for addax and other critically endangered antelope species.

“We want to use the best method for future sperm collections and then save the samples through cryobanking,” he said. “Addax are a critically endangered species, and from what I’ve read there are less than 50 living in the wild, so it is important to save as much of their genetic material as we can. If we can determine at what (initial) age they are able to produce sperm, we can begin collection as soon as possible and maximize the number of collections. This will help increase genetic diversity, plus reduce inbreeding by not leaving related individuals together for too long.

“We could possibly enter addax individuals into a given breeding program at the earliest viable age. Ideally, we will hone this collection technique so that other facilities might decide they want to use it, as well.”

Part of Lloyd’s reasoning for pursuing this project is that there is not much previous documentation on the topic.

“From my research, there are no other wildlife facilities that have described their methods to collect sperm from addax, so my paper can hopefully provide an introduction to successful collection,” he said. “Also, there is not a consistently stated consensus regarding the specific age of sexual maturity in male addax. My study put that age at 14 months, but my research turned up other sources stating as young as two years and as old as three years.”

During the process, Lloyd came to realize how interested he is in exotic hoofstock reproduction, which could potentially steer his career goals.

“For me, I learned a lot about reproduction and exotic animal management,” he said. “If I complete my master’s degree in wildlife science, maybe I can continue this research even further and potentially branch out to other critically endangered species. Assisted reproductive technology is relatively new in the exotic animal world.

“It is frequently used with domestic animals, but this technology will be critical in the efforts to save endangered species. In the meantime, it is important to learn as much as we can about how to best utilize it.”

Sure, it would be great to emerge from the process with only definitive conclusions, but Lloyd believes he has a process that can be built upon.

“I feel the study was successful in some ways, but there are things that could’ve been done better,” he said. “There is definitely a general, introductory framework to build off of. There are significantly more addax in captivity than in the wild, so hopefully this study can help facilities optimize their sperm collection and help them make more informed breeding decisions to improve genetic diversity.”