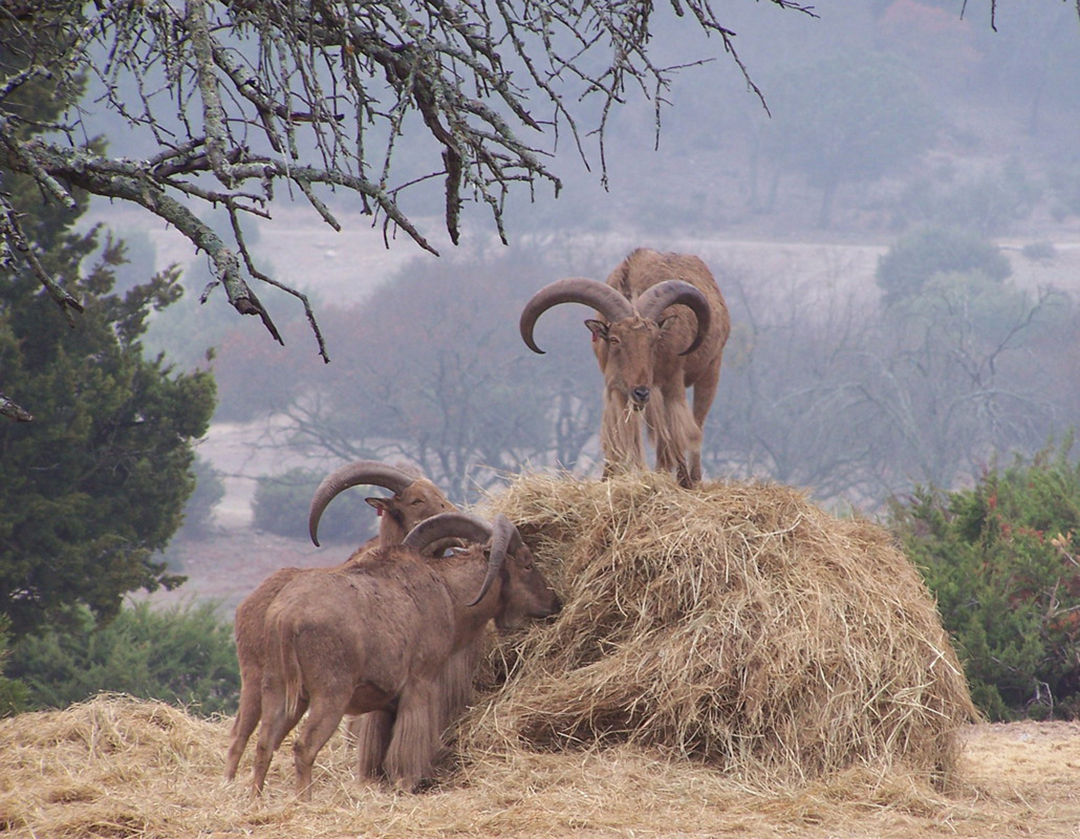 From May 5-11, it’s International Compost Awareness Week! Started in Canada in 1995, ICAW has continued to grow as more people, businesses, municipalities, schools and organizations are recognizing the importance of composting and the long-term benefits from organics recycling. You know our natural resources department is going to be in the composting spirit this week!

Food scraps are an important nutrient source for a good compost pile; they are often referred to as the “greens”. The kitchen scraps from Fossil Rim’s Foothills Safari Camp and Overlook Café get composted on property. To increase our impact and reach, Caitlin Pyle and Vanessa Hays began collecting the cafeteria food scraps from the Glen Rose ISD school campuses to add them to the Fossil Rim Compost Facility. 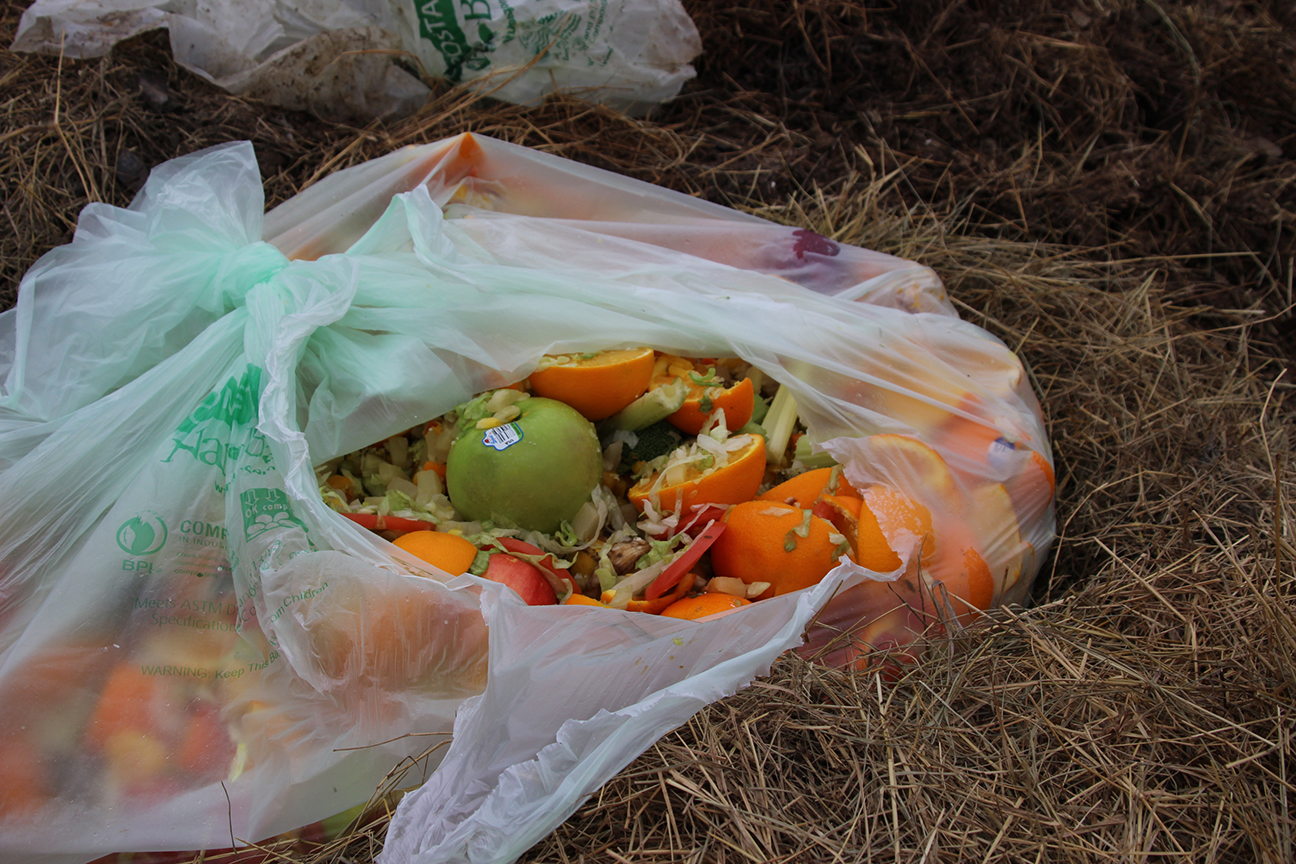 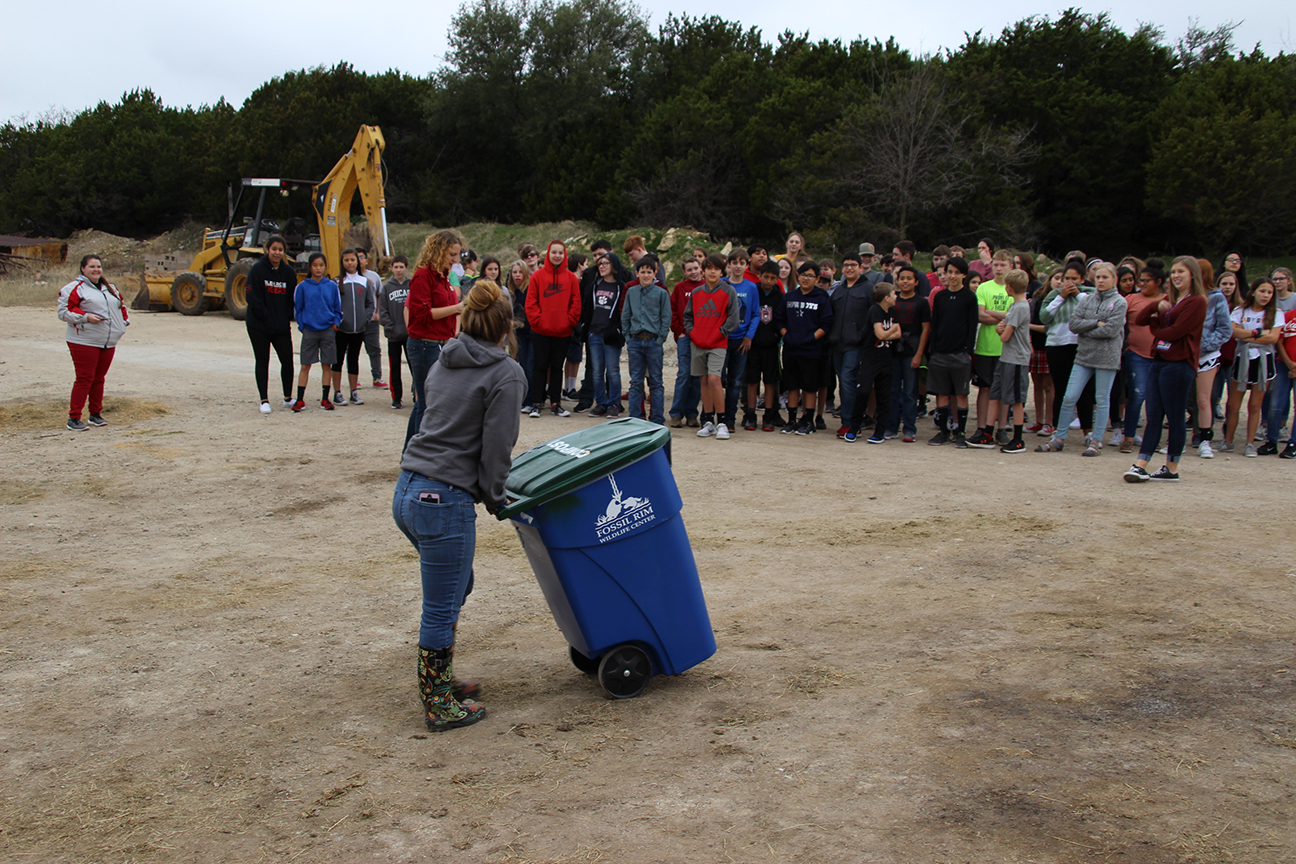 We ask each class if they will become “Partners in Conservation” with Fossil Rim in our composting efforts. Then, we invite them to tour our compost facility and really see how they are contributing to Fossil Rim’s conservation efforts.

Pro Tip: Using biodegradable products (cups, utensils, or trash bags as shown) works in our facility because it is a large-scale composting program, but these may not breakdown as well in a small backyard system. #PyleOfHays #CompostConversations #ICAW

Herbivore manure is a staple ingredient in Fossil Rim’s compost production. Our hoofstock species work tirelessly grazing – or, in the case of giraffes, browsing and eating snacks from our guests – to provide us with nutrient-rich manure that the animal care department collects and deposits at our compost facility.

One of our animal care specialists, Tim Lloyd, is seen cleaning up a midden, a communal latrine created by our rhinos. We are home to a dozen rhinos, eight southern white rhinos and four southern black rhinos, which together produce a lot of that special ingredient our compost needs. 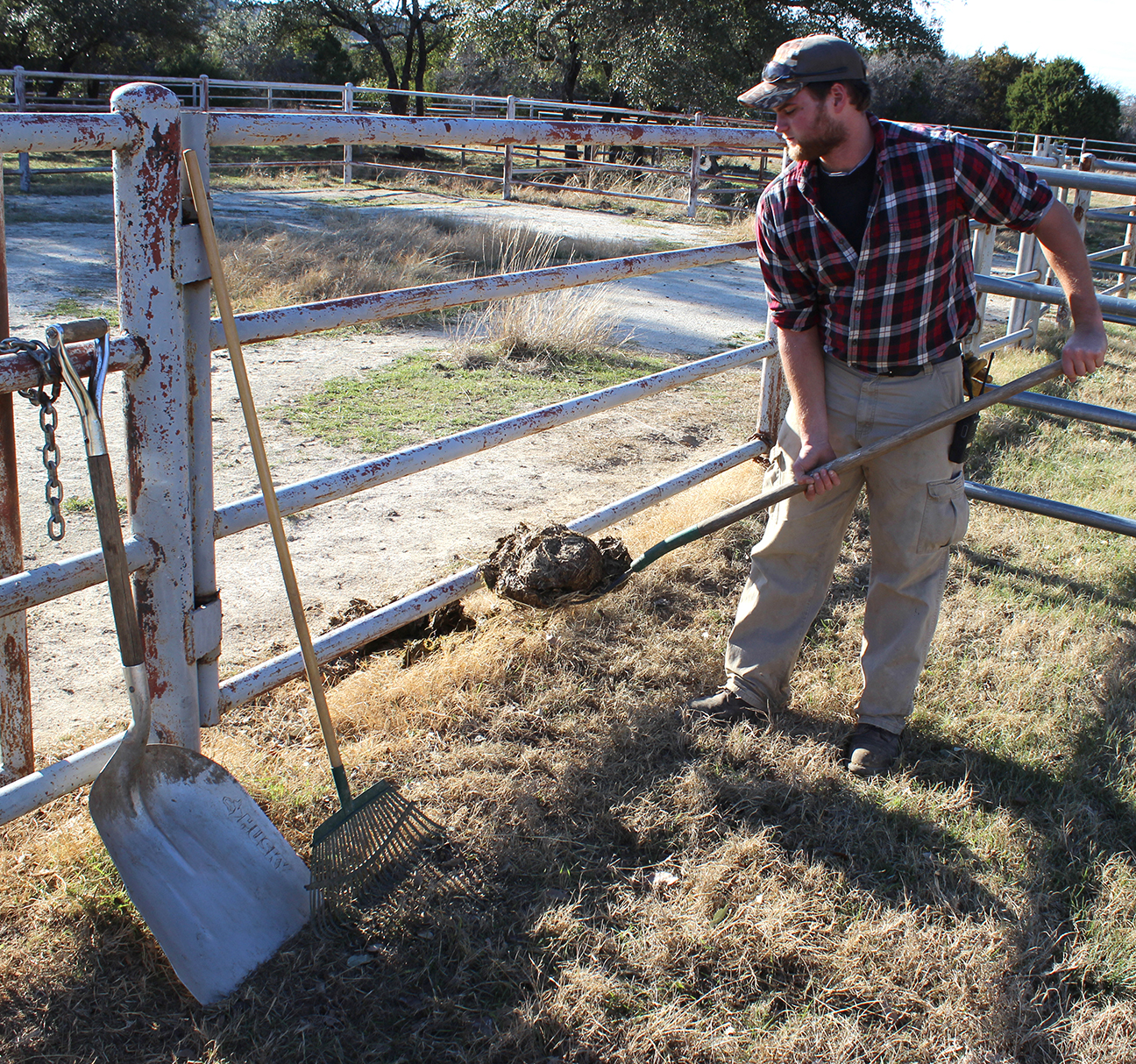 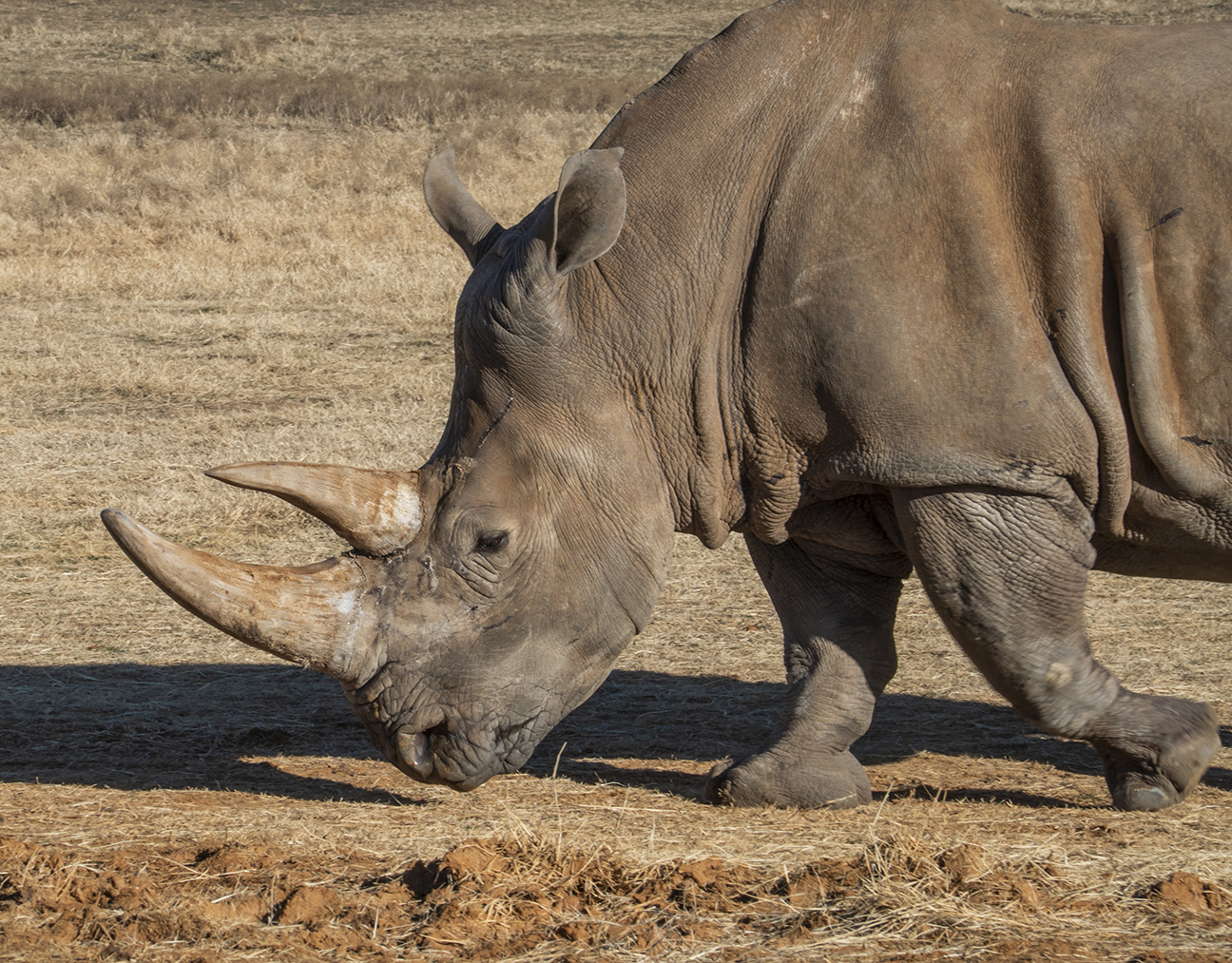 While our cheetahs, wolves, and other carnivores have a meat-rich diet and do not contribute their feces to our compost facility, we do accept their old hay bedding. Therefore, many Fossil Rim residents do their part in creating healthy, finished compost we then use directly on our hayfields!

Pro Tip: Sheep, rabbit, chicken, and horse manure each make for good compost, but similar to Fossil Rim’s cheetahs and wolves, you also want to shy away from composing your dog or cat feces.

During the previous two days, we discussed the larger components of proper composting at Fossil Rim, but we haven’t discussed why we compost or who the most important contributors to the process are. Many living organisms are necessary for healthy composting. They are responsible for breaking down the food scraps, manure, and any other organic items in our compost windrows. The process begins with microscopic bacteria that thrive in temperatures reaching 150 degrees (Fahrenheit). As the compost begins to break down and release heat, a whole new level of organisms arrive to key the next stage of decomposition.

These critters are typically invertebrates that thrive in cooler temperatures ranging from 110 degrees down to ambient temperatures. Fungi, such as actinomycetes, grow and continue decomposing the available nutrients, adding another layer to this growing microhabitat. These critters release that pleasant “earthy” smell we typically associate with soil. 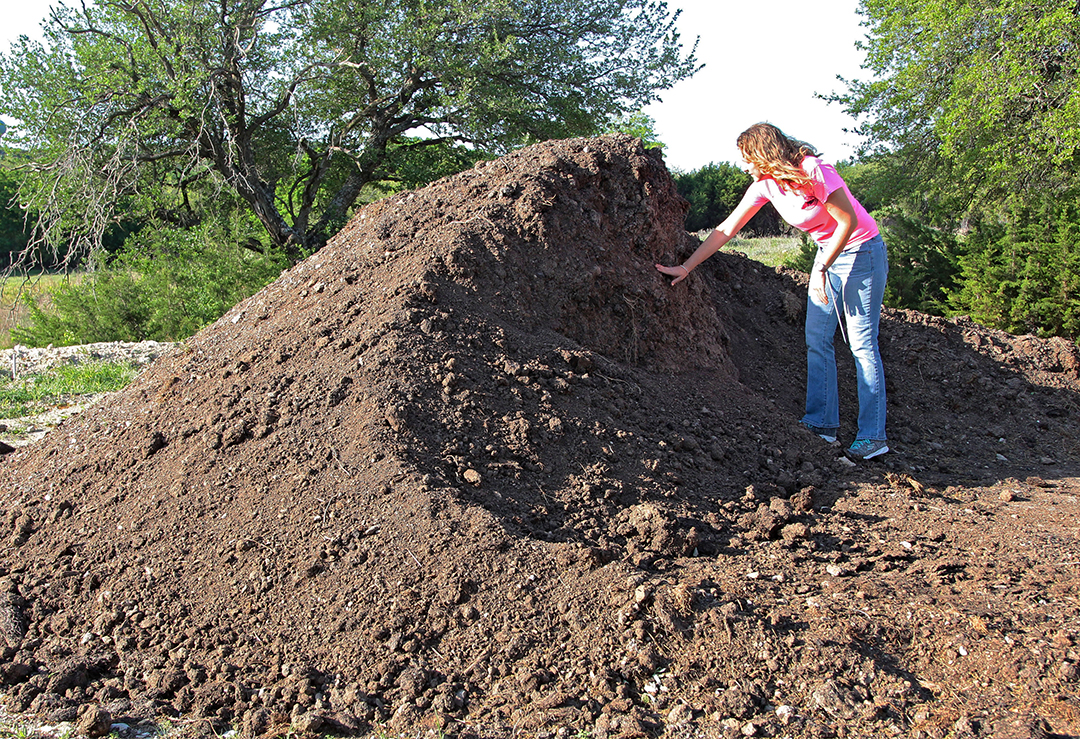 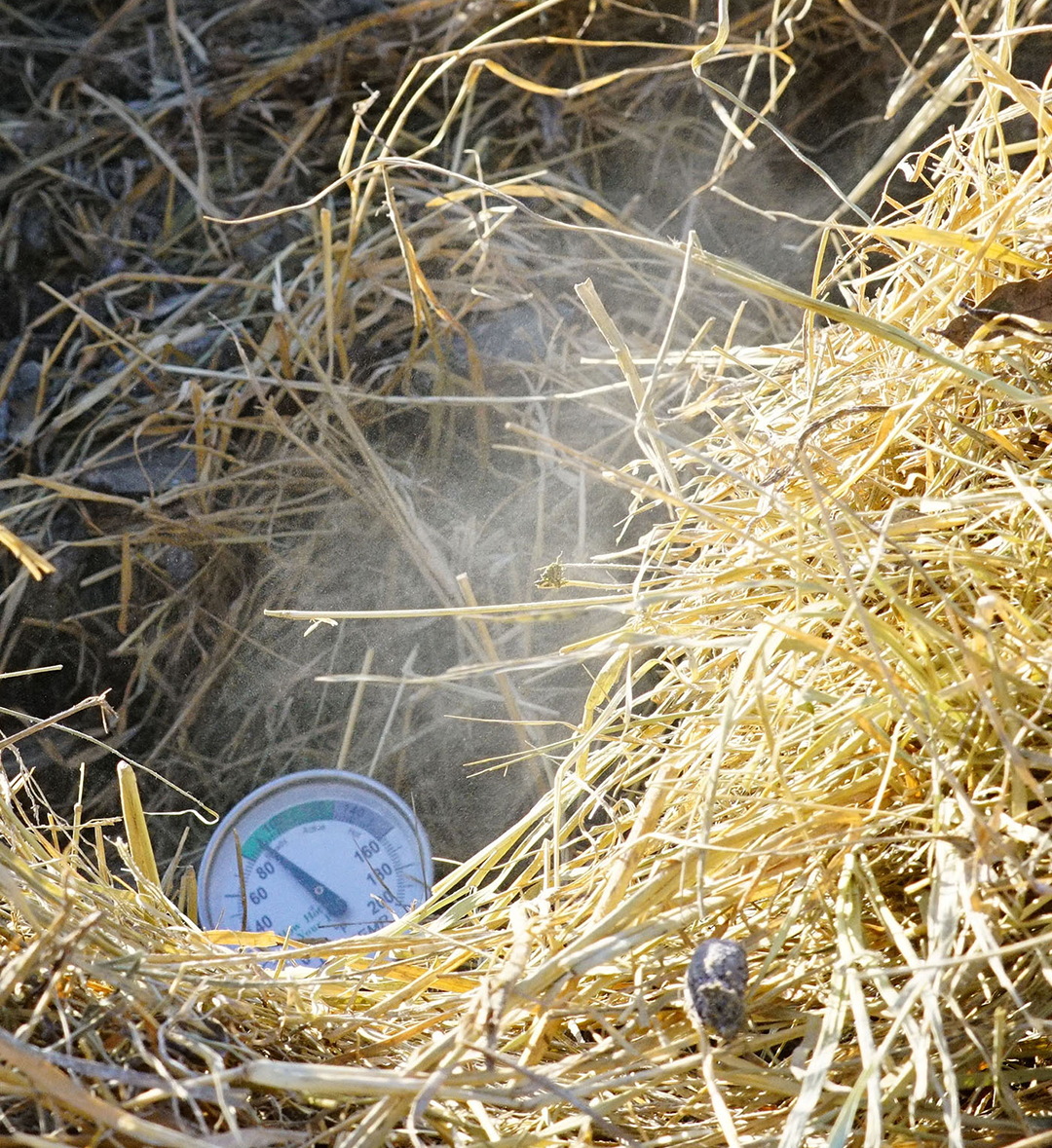 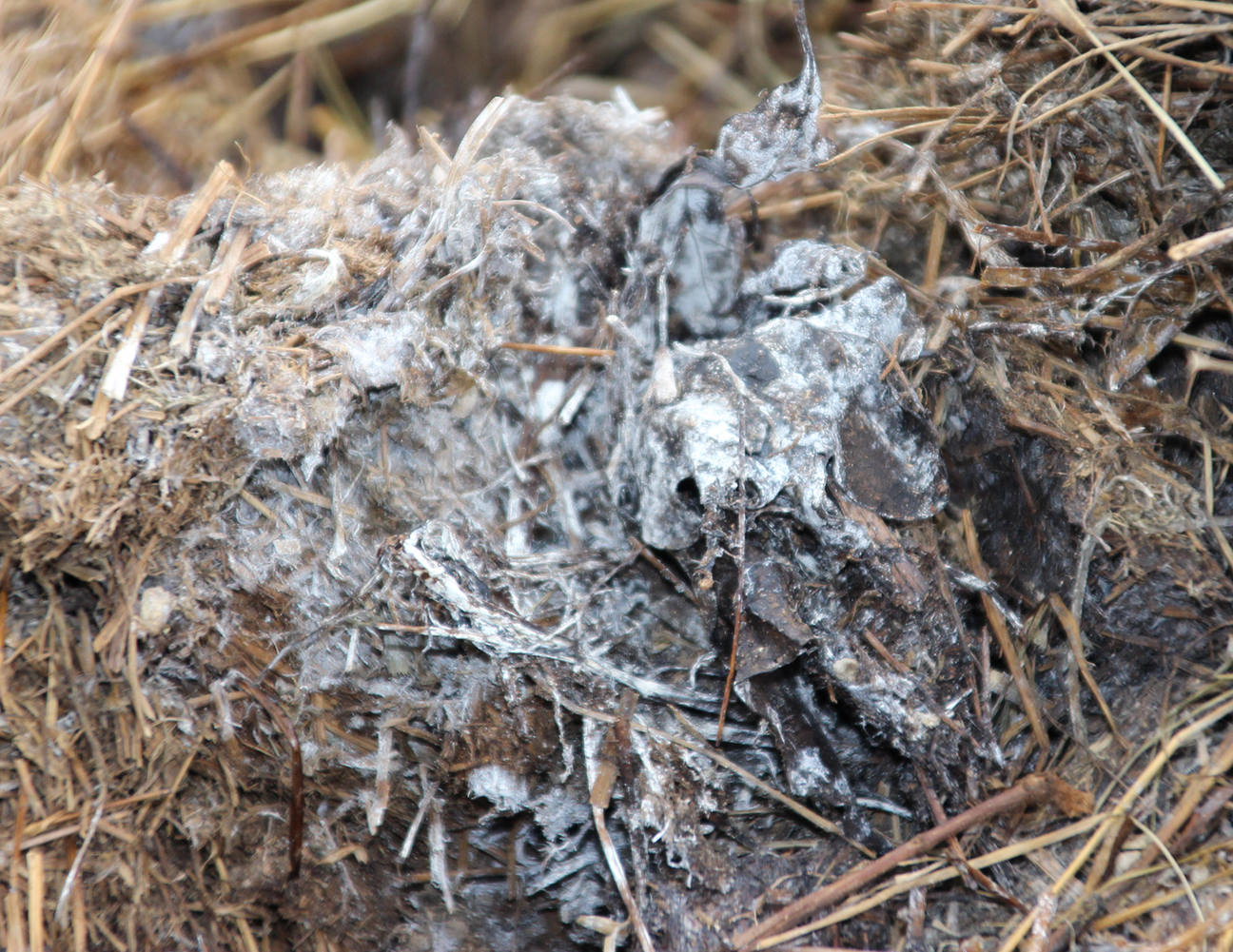 Just like our compost bin shows, there are essential resources these organisms need to effectively break down the raw materials; these include water, air, and food. A balance of all three ingredients is required to turn our raw material into a rich-soil amendment.

Once the bacteria, invertebrates, and fungi have broken everything down, the result is finished compost! At Fossil Rim, we use our compost that is rich in nutrients for our hay pastures. This fosters healthier hay that we feed to our animals.

Pro Tip: The best temperature to kill weed seeds and potential pathogens is 131 degrees for five days! A compost thermometer is a handy tool to measure your compost temperature.

The Compost Facility! This is where the magic called “decomposition” happens. All old hay, manure, and food scraps get dumped into a pile called the “Stage 1 Windrow”. The majority of decomposition occurs in Stage 1 where bacteria are voraciously eating the raw materials. Heat is released by these organisms, causing steam to rise when the windrow is manipulated.

Fossil Rim Natural Resources Specialist Vanessa Hays uses a front-end loader/backhoe to turn the compost. This aerates the windrow and enables nutrients to equally disperse throughout the mixture. Turning the compost promotes faster decomposition, which shortens the length of time necessary to produce finished compost. 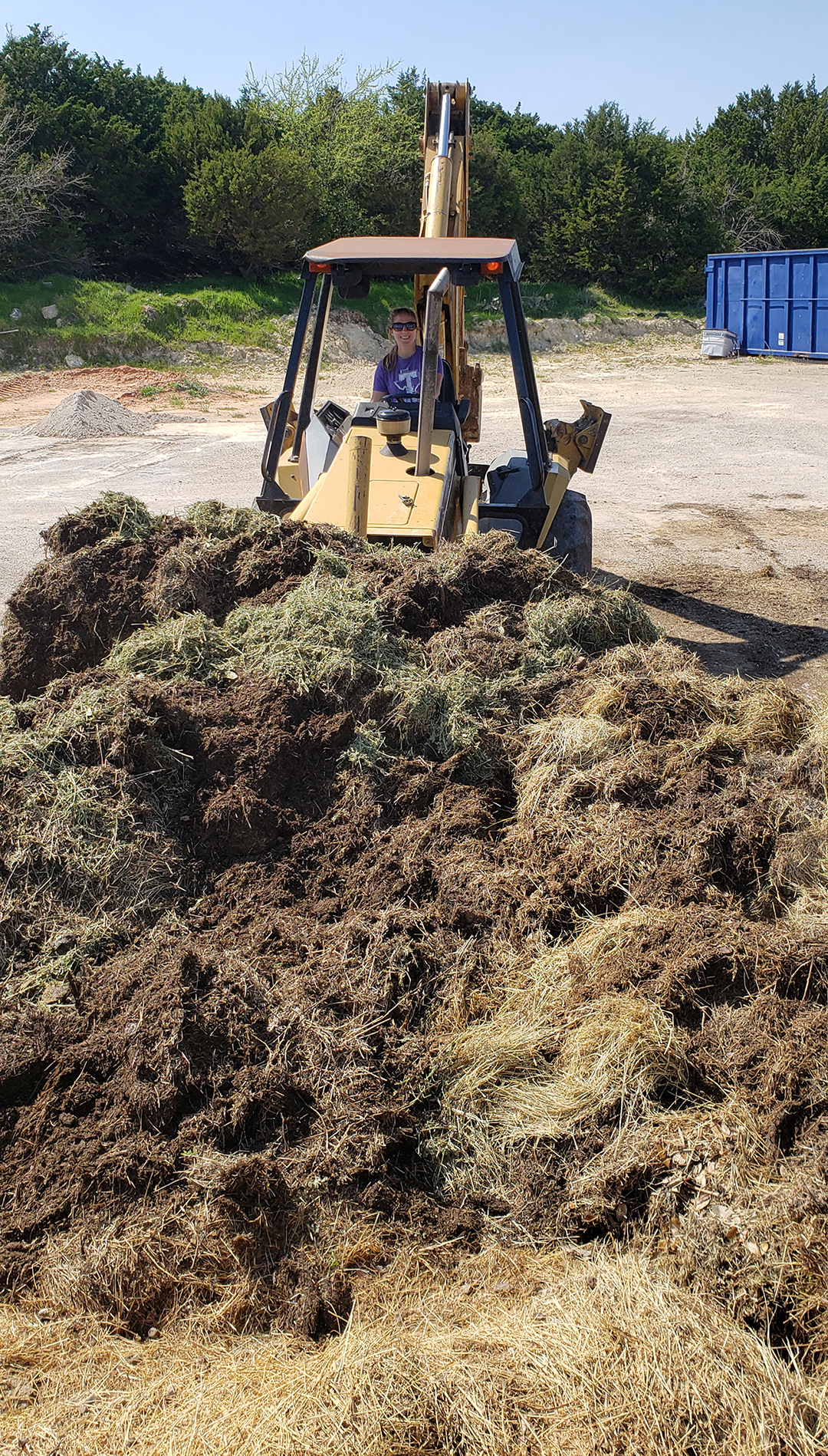 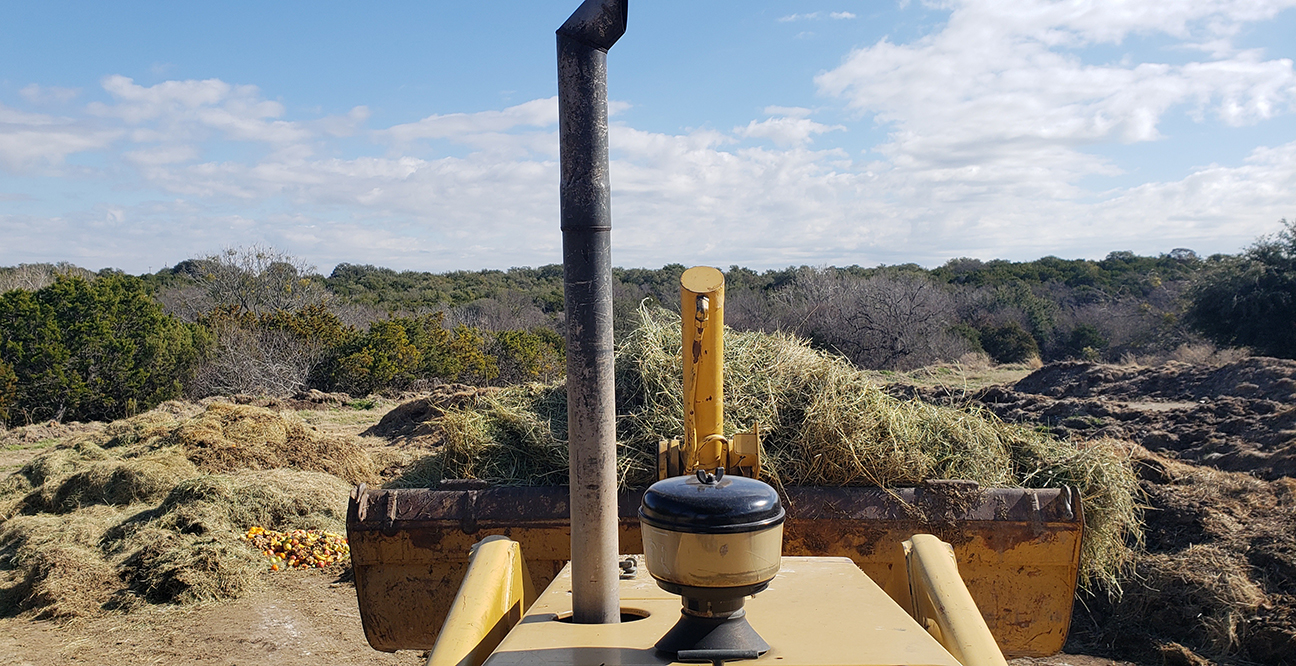 Pro Tip: To aerate your compost bin at home, you don’t need heavy machinery like a backhoe; just use a shovel, pitchfork, or other similar equipment!

Throughout this week, we have been discussing what compost is and what goes into it, but what about what Fossil Rim does with the finished compost that we produce? Fossil Rim’s Agriculture Resources Manager Daniel Branham is responsible for our annual hay production and field compost application.  We apply the finished compost on our oat field and hayfields on property, which provides added nutrients to the soil and aids the growth of healthy plants.

When you take the Gosdin Scenic Drive, you will likely see partial hay bales in some of the pastures. Animal care staff places them with purpose throughout the park to feed our hoofstock species. Doing this has a secondary purpose – to aid in soil creation and pasture health. 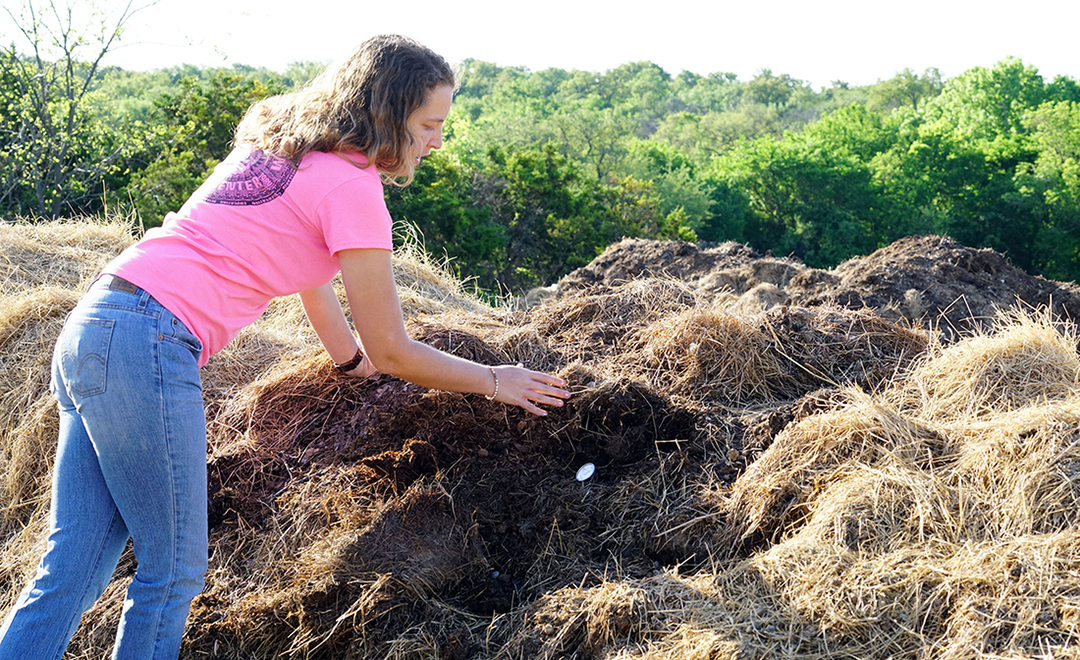 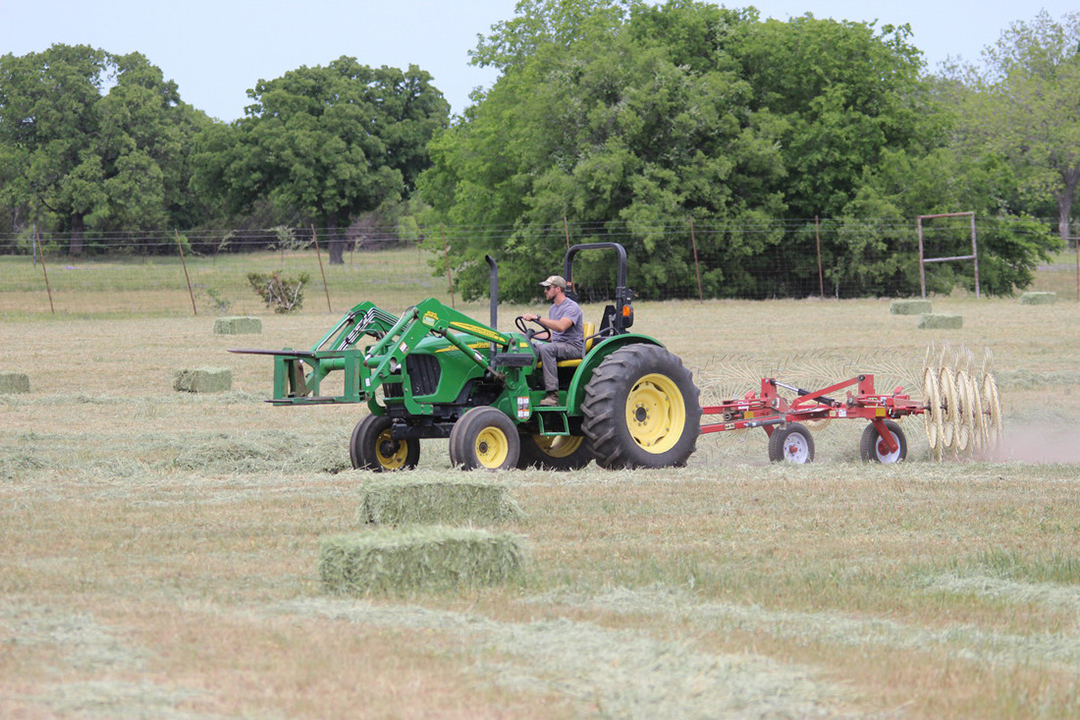 As the uneaten hay slowly breaks down, it gets aerated from animals walking around the area and extra nutrients are added by animals depositing their waste in the area. Over time, it will break down to add extra nutrients and more soil in our pastures.

The used hay not placed in the pastures comes to the compost facility, which will go through the process of decomposition in windrows. In time, the hay, along with manure, food waste and more, becomes nutrient-rich compost that we can then use the following year.

We feel pride knowing that we are helping feed our animals while being good stewards of the land at Fossil Rim through producing our own hay and composting.

At Fossil Rim, we are able to compost on a large scale. Our windrows are approximately 100 feet long and up to six feet high, but this is not feasible for at home/apartment composting. Today, the natural resources department is going to share a neat way you can compost at home!

Vermicomposting is a fun, easy way to attempt small-scale composting. This process utilizes worms, such as red wigglers, as the main decomposers, as opposed to bacteria. The worms break down leftover food scraps and turn them into nutrient-rich compost perfect for small-scale projects. 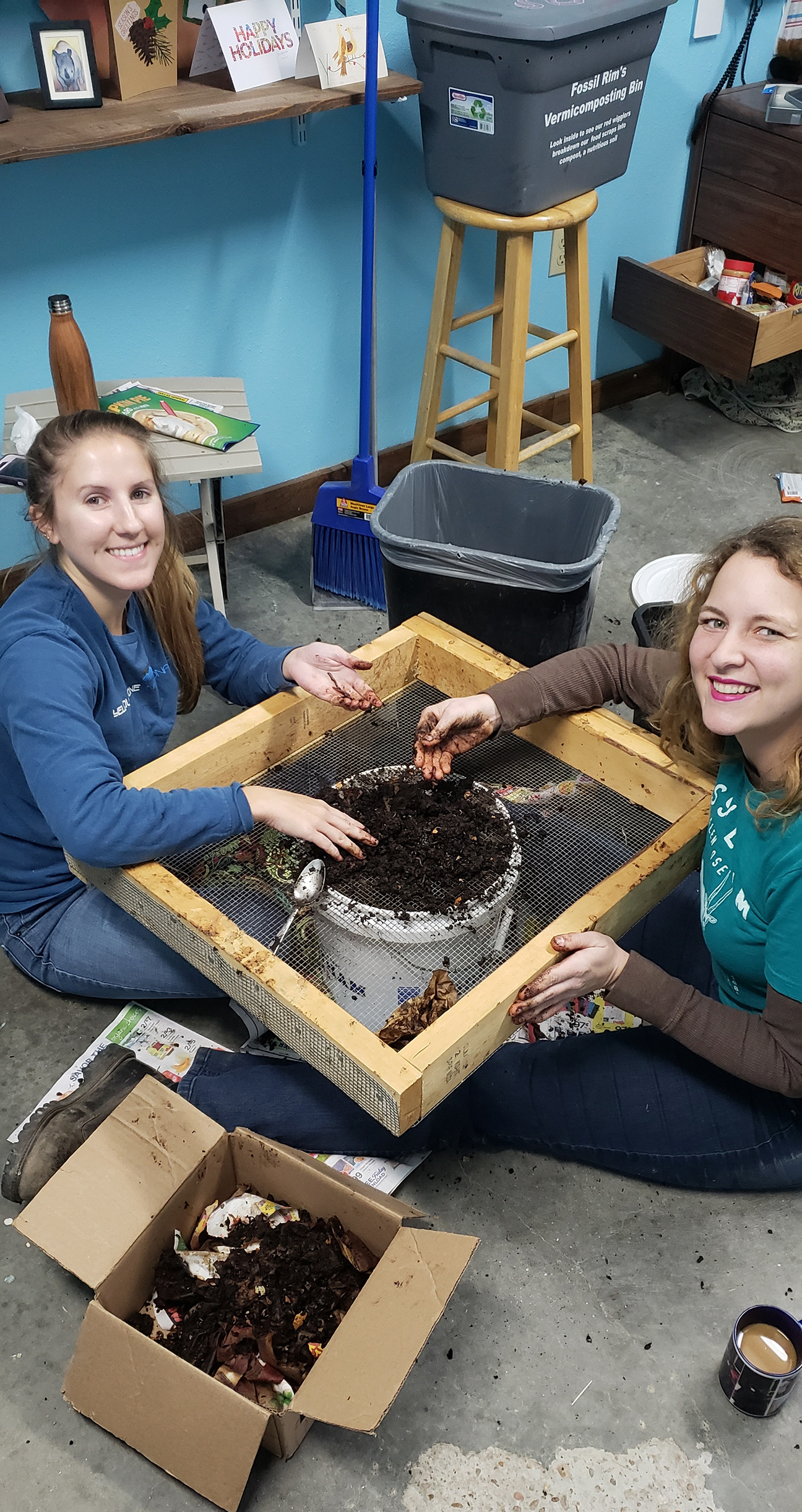 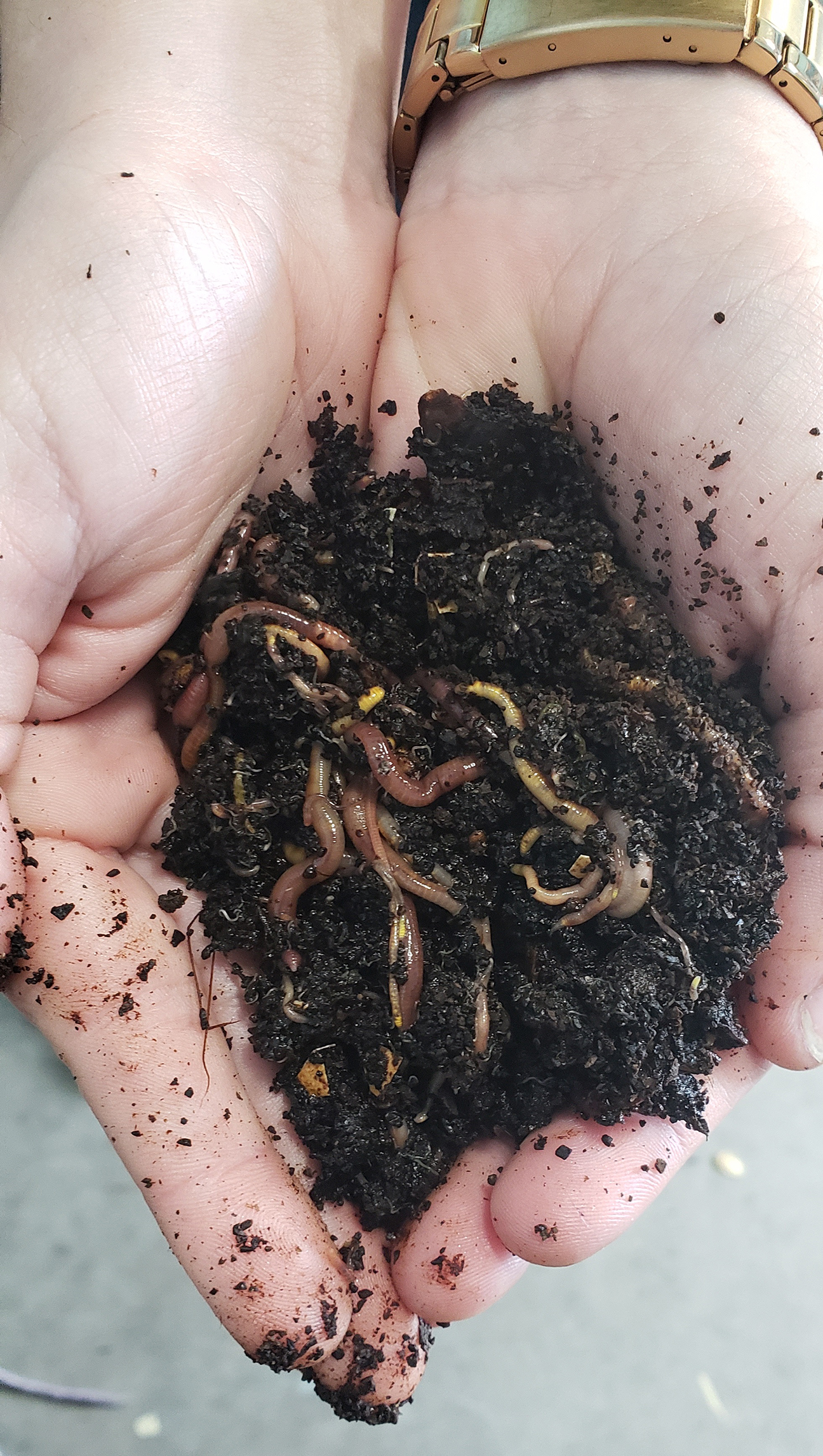 Red wigglers prefer cooler, damp environments, which makes this system ideal for apartments and homes with no backyard space for a small-bin system. One big difference between vermicomposting versus the typical method is that red wigglers can’t eat all food scraps. For example, onions or any citrus fruits are too acidic and potent for worms to break down.

It is important to be aware of the food-scrap-to-worm-population ratio of your bin; if there is too much food, it can grow mold. Therefore, it’s important to analyze your worm-bin ecosystem to make sure they are happy and healthy.

It’s surprising to note that vermicomposting doesn’t smell! Proper management of a worm bin should result in an earthy smell. If you notice many flies or a rotten odor, something is off with the environment and it needs to be reevaluated.

Pro Tip: Remember to clean out the worm bin occasionally or too much compost will build up and make unhappy worms!