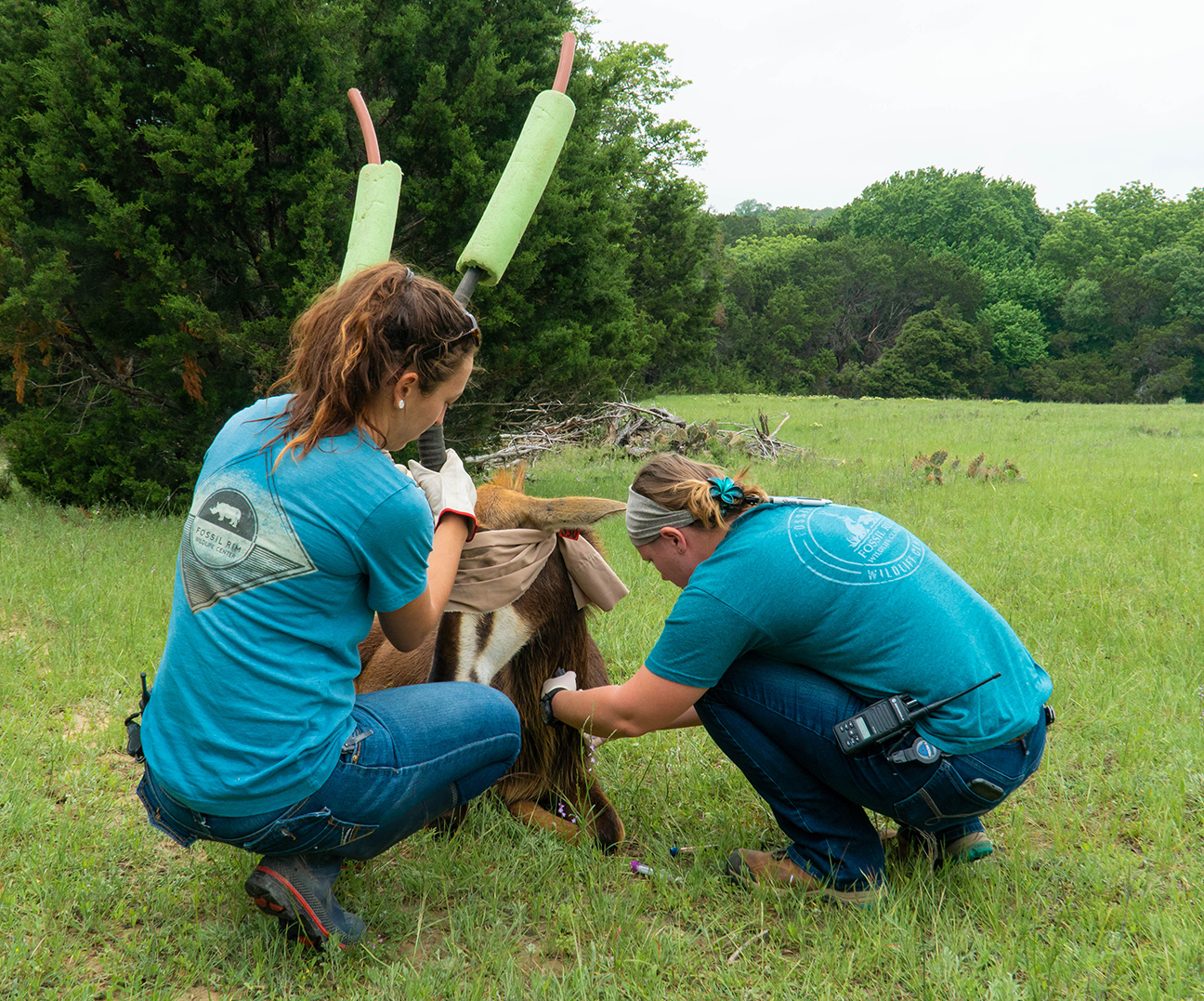 Allyssa Roberts dreamed of working at Fossil Rim Wildlife Center since she was a little girl. Could a girl’s fantasy one day become her reality?

Sure enough, she celebrates three years as Fossil Rim’s Veterinary Technician this fall. But, how did it happen?

She grew up in Mesquite, southeast of Dallas, roughly a 95-mile drive to Fossil Rim.

“I came here a lot as a kid, most recently in middle school,” Roberts said. “Then, I came back in 2008; that was the first time I brought my husband. I didn’t know the (Intensive Management Area), but was familiar with the main part of the park (seen from the Gosdin Scenic Drive).”

“I started out wanting to be a vet,” she said. “My aunt was a veterinary technician and she took me to work a couple of times, which was interesting. She recommended I get a job at a vet clinic as soon as possible to see what it was really all about, which I did. I learned that I didn’t really want to be a vet; being a tech was more for me.

“You don’t have to make as many hard decisions, plus I’d get to be more hands-on with the animals at the small-animal practice. I would primarily work late nights and overnight, so it was just me with the animals.”

“I found out about a veterinary technician internship opportunity through Facebook,” she said. “My sister-in-law tagged me on the internship post.”

She was accepted, and her internship began in July 2017.

“About a month after earning my bachelor’s, I began the internship at Fossil Rim,” Roberts said. “I had a full-time job at a small-animal practice in Dallas, and I was looking for an internship to try to switch gears from small animal. It meant a whole bunch of new experiences for me – a lot of exotic hoofstock species I’d never been around; it was fun. I got to do a lot more fieldwork, as opposed to always being at a clinic, so now I had to be prepared for the unexpected – plan ahead, bring all equipment and supplies.”

When the vet tech on staff departed from Fossil Rim, Roberts shifted into an interim vet tech position in Sept. 2017.

“As the internship transitioned into an interim staff position, I didn’t really feel that it was any different for me,” she said. “I just kept doing what I’d been doing. The only difference was that (former vet tech) Brenda (Cordova) wasn’t there with me.”

A month later, Roberts was offered the position on a permanent basis and she accepted. As opposed to starting from scratch, she had accumulated experience working alongside veterinarians Dr. Holly Haefele and Dr. Julie Swenson, which undoubtedly made her more certain of the commitment.

“Holly and Julie are awesome,” she said. “They are easy to work with and very helpful. Especially with some struggles I had after Brenda left – I was trying to figure out some of the stuff she hadn’t shown me because she hadn’t had to deal with it during her time here. I was constantly having to bug them, but they were really patient and helpful.”

A significant number of current Fossil Rim staff members across several departments were interns at the facility once upon a time.

“Because there are so many recent examples on our staff, it seems to me like if you come here as an intern, work hard, and get along with everyone, an opportunity to join the staff might come around for you,” Roberts said. “Speaking as a former intern, it is encouraging to believe that’s the case.”

While a detailed job description is likely an article in itself, Roberts gave an overview of her daily duties.

“I am the assistant to the veterinarians,” she said. “I assist with surgical procedures, immobilizations, and physical exams. I run lab work, collect blood samples, and get them ready to ship out or run (analysis on) in-house. I also run inventory and prescriptions for (animal) patients on property – refilling and getting new prescriptions ready.

“For example, our carnivores are on monthly preventive medications, just like your dog or cat at home. I’ll adjust the dosage as young animals gain weight and update their medical records.

“I also manage our stock (medicine, medical supplies) and keep the clinic clean. This time of year, my job is heavily tilted toward lab work. We have a lot of fecals (to analyze) because parasite load is more of an issue for the hoofstock in the spring.”

As Roberts talked about some of her most impactful experiences at Fossil Rim, it became clear they were confidence-building moments, for the most part.

“As an intern, I remember being so excited when I got a jugular catheter in a hoofstock animal, because I hadn’t done that in years,” she said. “You don’t do that sort of thing much in small-animal practice. I expected to be rusty, but it went perfectly. Also, I remember when we’d been trying to track a parasite in the maned wolves, and it is notoriously difficult to find a parasite in maned wolf fecals.

“When I finally found one after four different test styles, there was that same sense of excitement I felt about the catheter placement. And I have to say the first giraffe immobilization (for me) was pretty amazing, because that’s a massive animal.

“I remember looking back on it, after we’d trimmed the giraffe’s hooves and reversed the anesthesia, thinking about how cool it was to be a part of that. There was a big adrenaline rush knowing we were about to revive it and I needed to get all of the equipment back into the (vet) van as quickly as possible.”

Not unlike guests to Fossil Rim, Roberts has favorite species of her own.

“I really like seeing the P-horses (Przewalski’s horses), and fortunately for me they live right behind the vet clinic,” she said. “I also really enjoy the maned wolves.”

“I like working with all three of our vets,” she said. “Everyone is different with their own ways of doing things, of course. I had to get used to some of Holly’s quirky sayings so I’d understand what she meant. She’s always helpful when I’m trying to solve a problem, and I won’t forget her patience in the early days when I had so many questions.

“Julie has helped me in many ways, and I specifically think about my searches for some of these odd parasites. Nearly all of my books are on domestic animals, so she will point me toward alternate sources.”

Haefele and Swenson have both tracked Roberts’ progress in the department ever since her first day as an intern.

“Allyssa is a problem solver, which is really important when dealing with zoological species,” Haefele said. “Often, we need to find novel approaches to equipment or testing that will meet our needs, and Allyssa does a great job finding solutions for us.”

“I’d add that Allyssa is essentially unflappable,” Swenson said. “She remains calm under pressure and is able to focus on what she’s doing, even if everything else is a bit chaotic. Yet, even when focused on her own job responsibilities, she still manages to be cognizant of the other people around here.

“She is always responsive and receptive, even when juggling multiple tasks. I think her even-tempered personality at work goes a long way to keeping other people calm during stressful procedures, and that is hugely helpful.”

Just as she recognizes the differences in working with each veterinarian, Roberts has come to know each member of the animal care staff better, as well.

“Everyone in the two departments does a good job of communicating with each other, making sure we’re all aware of what’s going on,” Roberts said. “Some people will come to you with the littlest thing and wonder if their animal is okay, while others will do more observing before they say anything. You get to know each person and how they go about reporting to (animal health).”

When Fossil Rim takes on a veterinary technician intern, it heavily involves Roberts, plus many veterinary preceptees have mentioned how helpful she has been during their 6-8 weeks at the wildlife center.

“It is fun to help teach the preceptees,” she said. “Each one has a different background and you learn their story. Most of what I teach them is lab-related or regarding anesthesia or blood draws. I had some experience teaching new vet techs while at the small-animal practice.”

There are obviously a lot of “animal people” who work at Fossil Rim. But, if rankings were done for such things, it seems like Roberts would be up towards the top.

“I have a horse, dogs, a cat, a snake, and some fish,” she said. “I’ve always had at least one animal, if not a number of them. That’s probably why I always wanted to work with them.

“My aunt and uncle who live near Athens (Texas) have a small farm and rehabilitate wildlife, so anytime I was free in the summer I was out there. I’d show up and my aunt would hand me a (milk) bottle.”

She has really enjoyed the past three years as part of the Fossil Rim veterinary team.

“I’ve loved every bit of it,” Roberts said. “When I told my dad I got this job, he said ‘Holy cow, you’ve got the dream job,’ which is true. I came here all the time as a kid and would say ‘I’d love to work here.’

“I never really figured out how I would do that and went on with life, then it came back around and I thought it would be really cool to at least intern here. Then, it rolled into more and I did not see that coming. Getting this opportunity was pretty awesome.”