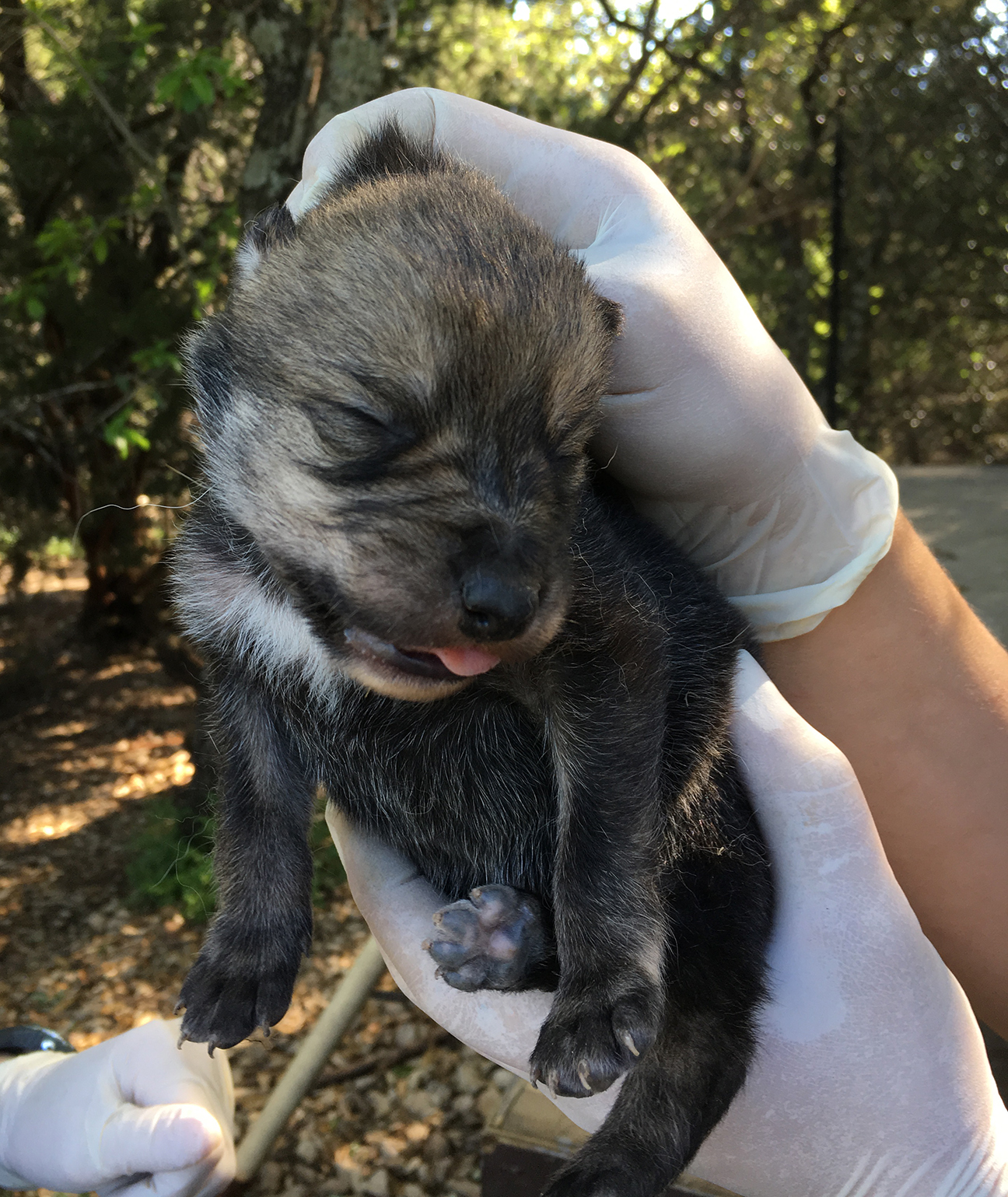 For most of the 29 years Fossil Rim has been involved with the Mexican Wolf Species Survival Plan (SSP), it has served as a holding facility. More recently, however, the wildlife center’s role has shifted.

On April 9, 2019, “Francina” gave birth to two puppies – a male and a female. Francina and the sire, “Javi”, previously produced two puppies, “Miguel” and “Margarita”, on April 19, 2018. The six wolves currently live together in the Jim Jackson Intensive Management Area (IMA).

Of the five litters produced in Fossil Rim history, two have come in the last two years.

“With the addition of our new pups, we now have a multigenerational pack of six wolves,” said Carnivore Curator Jason Ahistus. “The ability to play a larger role in the Mexican wolf breeding program is huge. This is an endangered North American species that needs help from zoos and conservation facilities to increase production to support the Mexican wolf recovery program, and we are happy to play a bigger part in that. We hope to continue to do so going forward.”

Francina had her first pair of puppies at age 10, and then followed with two more at age 11.

“This year’s litter is Francina’s last, because next year she will likely be post-reproductive at 12 years old,” Ahistus said. “She wasn’t in a breeding situation until she was older, and animals in cases like that usually don’t have the best reproductive success. Producing two healthy pups at age 11 is particularly rare and quite a feat.”

“It’s a tough transition for a wild animal to come into captivity,” Ahistus said regarding Javi arriving at Fossil Rim from the wild, as opposed to from another conservation facility. “For Javi to successfully breed multiple years in a row is great for the population.”

These months of the six functioning as a multigenerational pack are invaluable for Miguel and Margarita.

“This is great experience for last year’s offspring, Miguel and Margarita, because they will learn from their parents on how to properly care for offspring and they will play a large role in the new pups’ development,” Ahistus said. “Through the breeding season, the older pups see their parents breeding and observe other relevant behaviors. As the new puppies are born, they see mom and dad caring for the puppies. They learn from the parents, but they also take part, providing their younger siblings with food, caring for them, and teaching them.

“It’s a great thing in captivity, because that’s what older siblings do in the wild. The Mexican Wolf SSP prefers to have multigenerational packs, because it sets yearling offspring up for successful breeding and parental care when they reach maturity the following year. Fossil Rim was lucky enough to have litters in consecutive years to be able to go through this natural pack dynamic.”

The puppies are keeping a low profile from the curious eyes of the carnivore staff.

“We haven’t seen them out of the den, but we believe they go out for short periods of time,” Ahistus said. “They are so little that we can’t see them through the vegetation of the wolf yard.”

Javi and Francina were observed breeding on Feb. 4.

“(Carnivore Specialist) Tessa (Townsend) and (Senior Animal Care Specialist – Carnivore Alex) Sharkey were doing multiple daily observations during that time,” Ahistus said. “Confirming the breeding date is important for our planning purposes. They invested a lot of hours and dedicated themselves to the observations, so they were being – and continue to be – a big help to our management of the species.”

Where the pack literally goes from here will be determined this summer.

“Each year, our plans are decided at the SSP meeting,” Ahistus said. “When that meeting happens in July, it will determine if Francina goes to another facility or stays here in her post-reproductive years. The meeting will also determine the future of Javi and the puppies from the past two years.

“Whatever we can do to help the overall population is the best course of action. Before next year’s breeding season, our (current) one-year-olds will be separated from the pack, since they will be reproductively viable at that point.”

Prior to whelping season (new puppy births not factored in), the Mexican wolf wild population in the U.S. was at 131, which is a 12 percent increase from the previous year. There are about 30 wild Mexican wolves in Mexico.

“A 12 percent increase is great, and we’re hopeful for a larger jump next year,” Ahistus said. “It shows that the Mexican wolf recovery program is having success, not only with captive management, but also the ability to cross-foster pups in the wild. It’s also a credit to the efforts of U.S. Fish and Wildlife Service to protect the wild population.”

For now, the Mexican wolf section of the IMA remains closed to the public.

“I’d like to reopen the area soon, but it’s dependent upon behavior and dynamics of the pack,” Ahistus said. “We want to keep stress levels down for the family. Whenever the time comes, we will announce that the Mexican wolf area has reopened to Behind-the-Scenes Tours on social media.”

There is a lot going on these days for Ahistus, Sharkey, and Townsend in the carnivore department.

“Spring is a great time for our carnivore department,” Ahistus said. “It’s when most of our babies are born, and we’ve had some successes this year that we hope to build upon.”