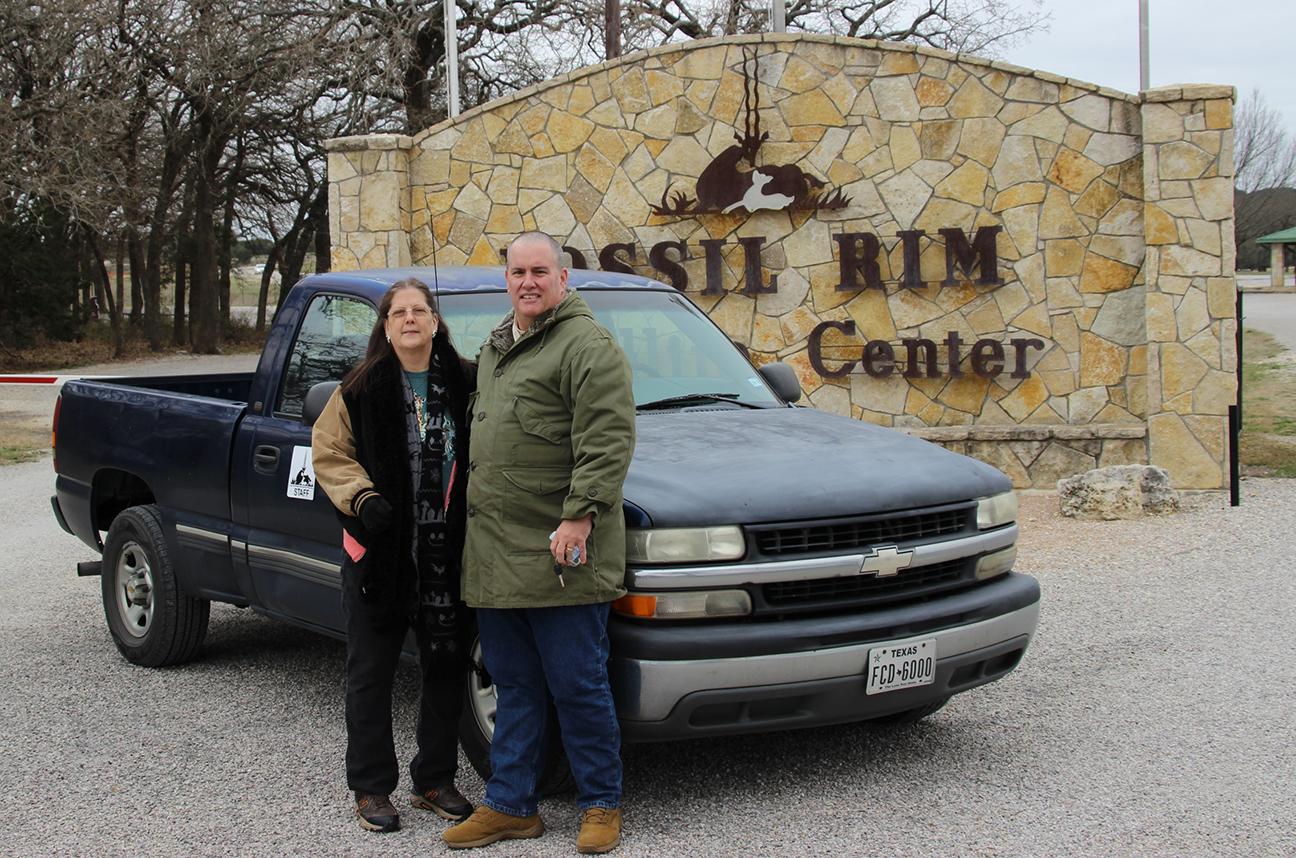 Lesson for our tour guides – carefully consider your words, because they can have can have an awesome effect!

Dan and Susan McCormack, residents of Irving (TX), visited Fossil Rim on the frigid morning of March 4 to donate his 2001 Chevrolet Silverado 1500 to the wildlife center.

“When we were on the Rhino Encounter Tour (in early January), we were told by the guide (Cassidy McDonald) that if we knew somebody looking to donate a vehicle, Fossil Rim would be more than interested,” Dan said. “I’d been wanting to buy a new truck for a while. There’s nothing wrong with this one; I’ve just been driving it for 18 years. Susan and I got to talking – instead of selling it or trading it in, why don’t I donate the truck to Fossil Rim?

“I called and spoke to (Chief Financial Officer) Mr. (Tom) Clark, and he was very helpful to help us get the ball rolling. Here we are. We didn’t even know vehicle donation was an option until she made the remark.

“But, as members, we thought there is probably more we could do. You all do such a wonderful job with wildlife out here that we wanted to do what we can to help.”

To say McDonald was pleased to learn the following day that she had spurred a vehicle donation would be an understatement.

“I was so excited to find out that my tour positively impacted the guests and letting them know about the donation option caused them to want to give back,” she said.

As it turns out, the McCormacks are serious Fossil Rim fans.

“It’s our pleasure to help out Fossil Rim,” Dan said. “We’ve been Fossil Rim members since 2016 and have been visiting the park for about 10 years. We come out here 6-10 times per year. We’ve done the Discovery After Dark Tour, the Rhino Encounter Tour, and we’ve stayed in the Peregrine Room at The Lodge a couple of times.

“We’ve stayed in the (Foothills Safari Camp) cabins, which are phenomenal, by the way. We’re staying in the Cheetah Cabin tonight, and we try to stay overnight 3-4 times each year.”

Animal lovers who have visited other nature parks and a bevy of zoos, they discovered Fossil Rim from a billboard in the Metroplex.

When asked about their Fossil Rim experiences, Dan’s thoughts turned toward a particularly tall resident.

“The last time we came out here, we were in Susan’s car,” he said. “We both love giraffes. She’d set the feed bag in her lap. It amazes me how gentle the giraffes are, but this giraffe just stuck his head in the window, grabbed the bag and took it away.

“We took off to the (Nature Store) to confirm that eating the bag wouldn’t be lethal to the giraffe, but the point is that you never see the same thing twice out here. It might be different interactions with other animals or what a particular animal is doing on its own.

“We try to come out early in the day, and we go through the park 2-3 times per day. I’ve never been to Africa, but you see animals here in what I think has to be a decent facsimile of their natural conditions. The animals seem happy, as opposed to stressed.”

Upon learning how often they have visited the park, Dan was asked about the different seasons at Fossil Rim.

“We see a different Fossil Rim depending on the season we visit,” he said. “You see the wild turkeys in the spring during their mating season, for example. Most animals tend to be more active during the cooler parts of the year, like the bison. You definitely notice that weather plays a factor.

“There are species like addax and aoudad, however, that are going to respond if you shake a bag of food and come see you no matter what the weather is like. We’ve visited when it is 20 degrees and also 110. To us, there isn’t a bad time to come out here.”

The truck has air conditioning, which is not something all Fossil Rim animal care trucks offer. It figures to be transporting a thankful staff member through the pastures during sweltering Texas summers.

“Susan said she thinks it will be very cool if we visit in the future and see our truck being used (by animal care staff),” Dan said. “You guys will do good things with it, and I think that will be a cool deal.”

To learn more about the donation options at Fossil Rim, check out fossilrim.org/donations/.