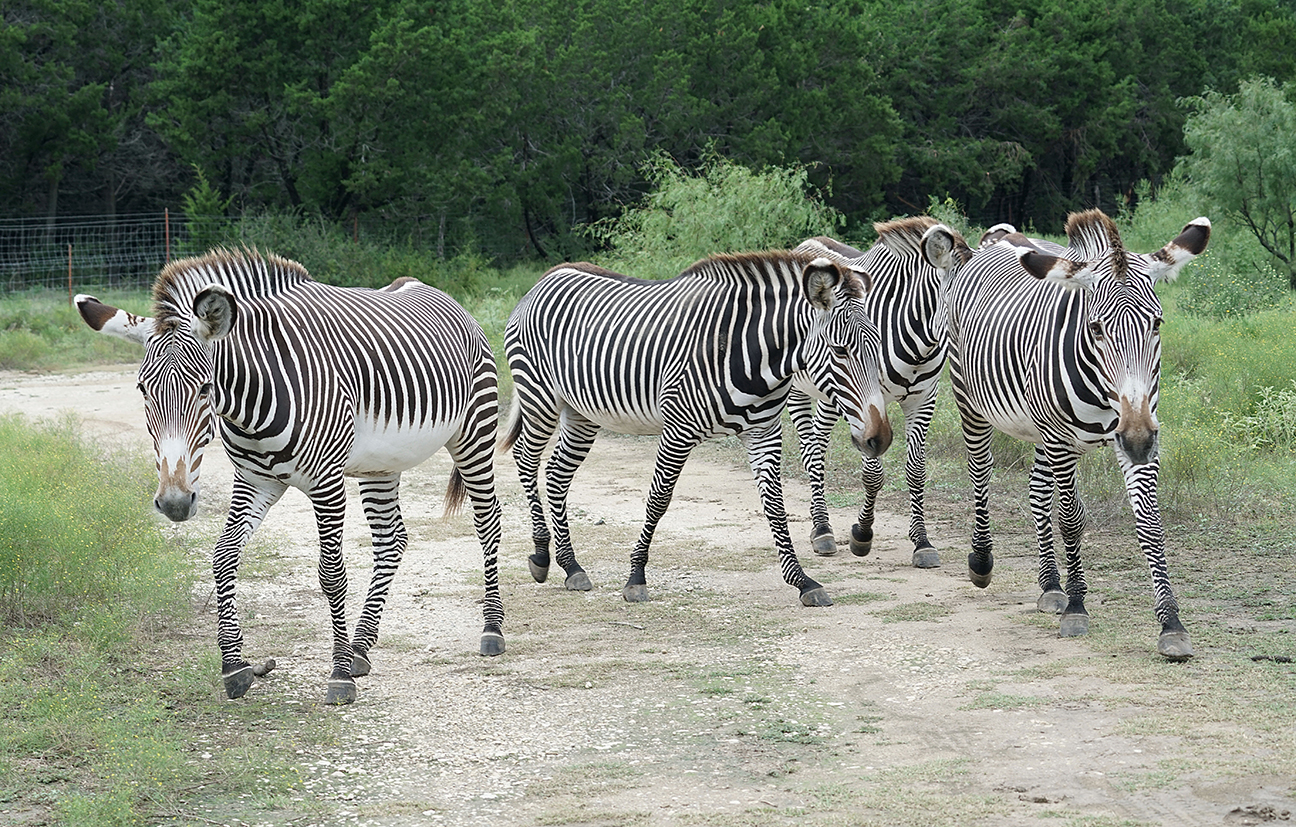 When an outstanding occasion like International Zebra Day rolls around (Jan. 31), it is the perfect time to check in on the equid population at Fossil Rim.

The mountain zebras live in the Game Preserve pasture below the Overlook area, while the other two equid species live in private pastures near the veterinary clinic. For people interested in trying to visit the latter two species, consider booking an Adventure Tour. When talking to the reservation department, request that the tour focus on those two species – it will require our reservation staff to ask the animal care department for permission.

“Obviously, all three of those species have different personalities,” said Director of Animal Care Adam Eyres. “The mountain zebras that are out on the scenic drive – of the three, they are probably the most good-natured towards people, and that’s why they are the ones out in front of the public. We don’t have real aggression problems with the Grevy’s, but stallions can be aggressive and the one we have now falls into that category.

“As a staff, we don’t put ourselves in position where they might hurt us. We pull up, put our truck between us and the animal, and then put the food out. Otherwise, we try to deal with them from the truck.

“We got four new P-horses (in December 2018), and they all seem to have similar personalities. The three we previously had for a number of years acted the same way these guys do. They aren’t aggressive towards people, but are aggressive towards each other when trying to sort out their hierarchy.

“Generally, when we go in to feed, they walk away from us. When we are done, they come up and eat.”

After looking at photos of Grevy’s and Hartmann’s for years, as a certain blogger is prone to do, it becomes much easier to tell the two zebras apart. However, a novice to the world of zebras might need a bit of examination.

“When we had Grevy’s and Grant’s zebras, telling them apart was really easy because the stripes on a Grant’s go all the way around the belly,” Eyres said. “The stripes on our two current species both stop at the belly. The stripes are thinner on a Grevy’s and their ears are big and round. If you see a facial photo of each, I would look at the ears to know which one is the Grevy’s.

“Mountain zebras have the dewlap on their neck, which is unlike any other zebra. Our zebras live in different pastures, but if you were to see these two species together, the Grevy’s zebras are much larger.”

Hartmann’s mountain zebras, classified as “Vulnerable”, can reach 60 inches tall at the shoulder and weigh 750 pounds. The population trend of Hartmann’s is increasing.

In the wild, they are located almost entirely in Namibia with numerous small pockets of the zebras in South Africa. There have been more than 20 Hartmann’s foals born at Fossil Rim.

“I can say they are well-protected in Namibia,” Eyres said.

While Hartmann’s habitat is generally described as grassland, they actually live on the edge of the Namib Desert where surface water can be lacking, so the herds must wander between the mountains and sand flats in order to find patches of grass. Interestingly, despite having “mountain” in their name, Hartmann’s live at an elevation range of 0-3,000 feet – lower than the range of wild Grevy’s and Przewalski’s horses.

Grevy’s zebras, classified as “Endangered”, can reach 63 inches tall at the shoulder and weigh 1,000 pounds. They have a stable population trend.

Wild Grevy’s live almost entirely in Kenya with two small pockets in Ethiopia among grassland and shrubland at an elevation range of 1,000-7,500 feet. There have been more than 30 Grevy’s foals born at Fossil Rim.

“The Grevy’s suffered from a big anthrax outbreak in (Kenya in 2005-06),” Eyres said, as 53 of the zebras died as a result. “Even though they are still endangered, it is encouraging to know their situation in the wild is not worsening.”

Przewalski’s horses (P-horses), classified as “Endangered”, can reach 56 inches tall at the shoulder and weigh 660 pounds. They have an increasing population trend. Wild Przewalski’s live in China, but have also been successfully reintroduced into Mongolia. Their habitat varies from desert to grassland at an elevation range of 3,600-6,600 feet.

“There have been some reintroductions for the P-horses, and some of those populations are doing well in their respective locations,” Eyres said.

At Fossil Rim, the two more isolated species may have a bit more diversity in their diet.

“The Grevy’s and P-horses are off in (private pastures), and there are a greater variety of plants for grazing than what is available to the Hartmann’s,” Eyres said, considering the Game Preserve pasture is also occupied by Arabian oryx, aoudad, red deer, fallow deer, and giraffes among other species to limit those grazing opportunities. “Those isolated animals may be grazing and browsing on some plants that we don’t know about, but for the most part all of these species are eating what we’re offering – pelleted feed and hay. They’ll graze when the grasses are of good quality.”

While International Zebra Day is but a small fragment of the calendar year, at Fossil Rim, we will be more than willing to talk exotic equids with you on every one of the 362 days we welcome visitors.