Fossil Rim externship rises to top of the heap 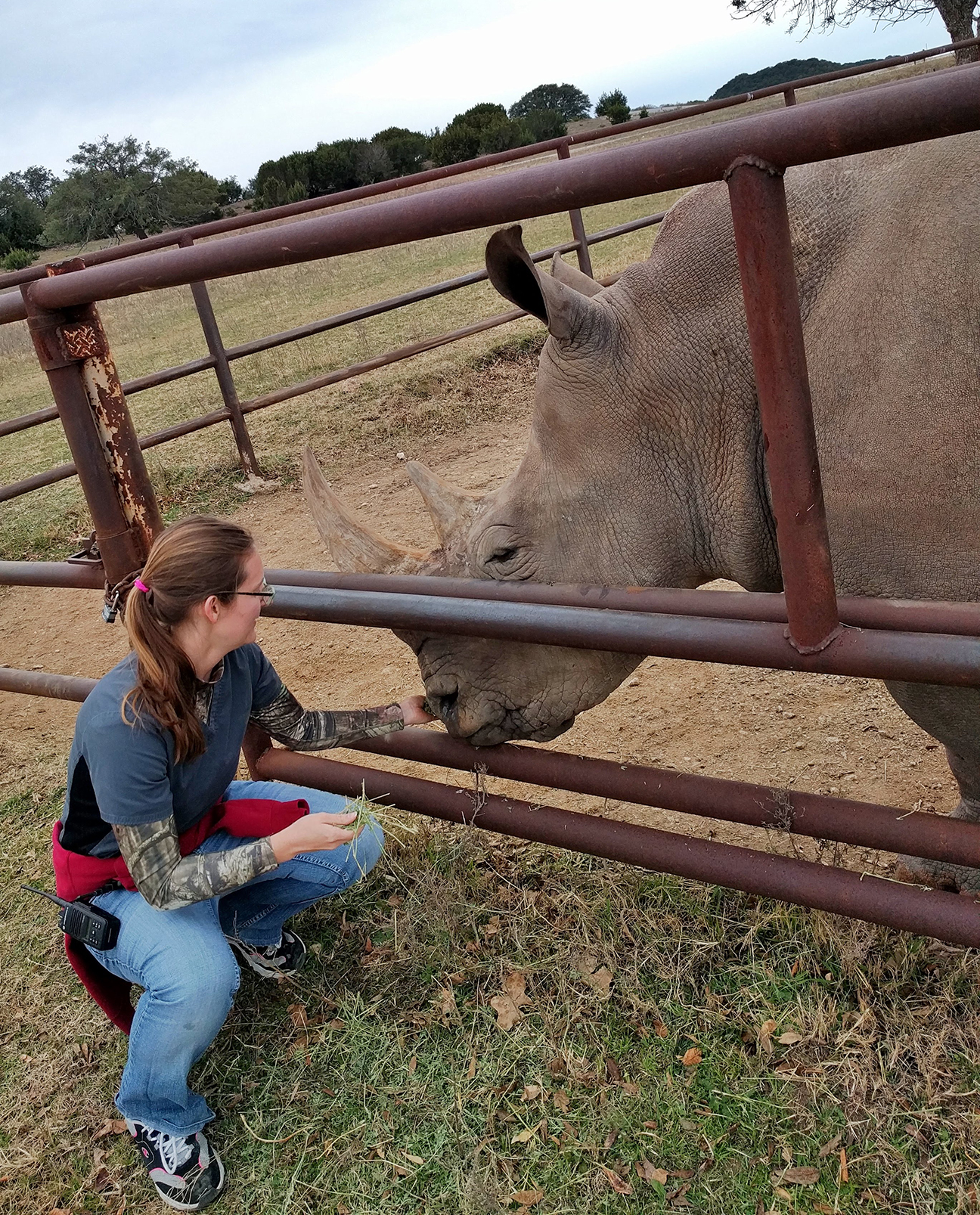 All veterinary preceptees accept the challenges awaiting them at various externships, but Christina Mathis has pursued more of these learning opportunities than most.

“Over the course of my four years in vet school, I’ve done more than 30 externships,” she said. “For this fourth year, there are only four, and this one at Fossil Rim has actually been my longest. Two of those each lasted one month, and my next one is at Dallas Zoo for a month.”

The native of Wrangell, Alaska was at Fossil Rim from Nov. 5 to Dec. 12. She majored in biomedical sciences at Texas A&M for her undergraduate studies and is set to graduate from veterinary school at A&M in May 2019.

Mathis explained how she was in position to accumulate nearly three dozen externship experiences.

“I’m an alternate track student, so we actually create our own curriculum,” she said. “We take a basic small animal foundation within the Texas A&M Teaching Hospital, while we plan the rest with externships all over the place. I’ve been to Washington and Tennessee, among many other places, for my externships, but this one has been my favorite. The idea is that A&M has a very small zoo department and you can only take that rotation twice for two weeks each, so if you are interested in doing exotics or wildlife medicine, you have to create your own path.”

Many preceptees have been recommended to seek out Fossil Rim, but her own investigation drew Mathis to the Somervell County facility.

“I was looking for veterinary externships and, during a Google search, Fossil Rim popped up,” she said. “I’d previously visited Fossil Rim (as a general guest), so I was somewhat familiar with the organization and the park itself, which made me want to jump on this opportunity.”

While she was here to learn first and foremost, Mathis was quick to say how much fun her time at Fossil Rim had been.

“Being so close to the animals is something you don’t necessarily get at other (facilities),” she said. “Plus, I’m living in the park (at the Intern House), so that’s really awesome.”

It seems the Fossil Rim preceptorship differentiated itself from the long list of other externships she has accumulated.

“Animals here are taken care of differently compared to all my previous externships,” she said. “They are more like wild animals, in that they are left to do the things they are naturally supposed to do. I didn’t really know what to expect, so I had to make these observations once I was already here.

“I can say I got to do a lot more hands-on work than I expected, which is one of the things fourth-year vet students really look for. Being able to do blood draws, sample collection and anesthesia monitoring were all important to me.”

Mathis reflected on some standout experiences she will recall decades from now.

“The number one thing that stands out is ‘Blake’ the white rhino calf,” she said. “He was actually my first encounter with the rhinos here, and he made a very good impression. He is my favorite animal here without question. ‘Xena’ (the white rhino calf) is cute, too, but she has a bit of an attitude.

“Mostly what I did with Blake is distract him so that he didn’t bother the vets while they did a procedure on an adult rhino that was having her foot cleaned daily. Also, not to be morbid, but I really enjoyed performing the necropsies. We had one on an Attwater’s prairie chicken that I was able to do myself.

“I would also mention being able to ride along with (Senior Animal Care Specialist – Hoofstock) Justin (Smith) near sundown when he was corralling the giraffes. It was cool to see how he went about gathering them all up.”

On that note, Mathis appreciated being able to learn from multiple departments.

“I really enjoyed working with the carnivore staff,” she said. “We did a lot of cheetah and red wolf care, and all three of them are really nice. I worked with Justin often (for hoofstock), and he was very good about walking me through the steps during an immobilization.

“The veterinary staff was a pleasure to work with. They were really good about targeting my weaker areas and helping me improve. We talked a lot about drug protocols.

“Allyssa the (veterinary) technician helped me with my parasite identification on fecal exams. Being able to learn the basics of the veterinary technician side regarding lab work was much appreciated. All of the one-on-one time with different members of the animal health staff was great.”

With graduation mere months away, Mathis knows where she wants her journey to lead.

“I’m hoping to take a position with a small animal and exotics clinic,” she said. “Hopefully, I can expand that to include deer ranches, farms, and exotic hoofstock. It’s a matter of getting into that niche, but I think Fossil Rim increased my confidence in terms of working with cervids.”

Just as a preceptee would hope, Mathis pointed to specific experiences at Fossil Rim that should benefit her as a professional.

“Immobilizations will play a huge role if I am able to work with cervids and exotic hoofstock,” she said. “That was a mainstay activity here with the vets, so I found it extremely helpful. The things Allyssa taught me during labwork about fecals and such is a crucial part of veterinary medicine. I feel much more prepared now as I get closer to my career.”

There may have been a few externships over the past four years that Mathis would not recommend to another aspiring veterinarian, but Fossil Rim definitely is not one of them.

“I would tell them to do it, because there really isn’t a good reason not to unless you can’t commit to six weeks here,” she said. “They provide housing and a stipend, great mentorship, and it is very educational, as far as animal conservation and animal health are concerned.”

“They need to feed the giraffes; put that at the top of the list,” she said.