Navigate The Path To Your Profession 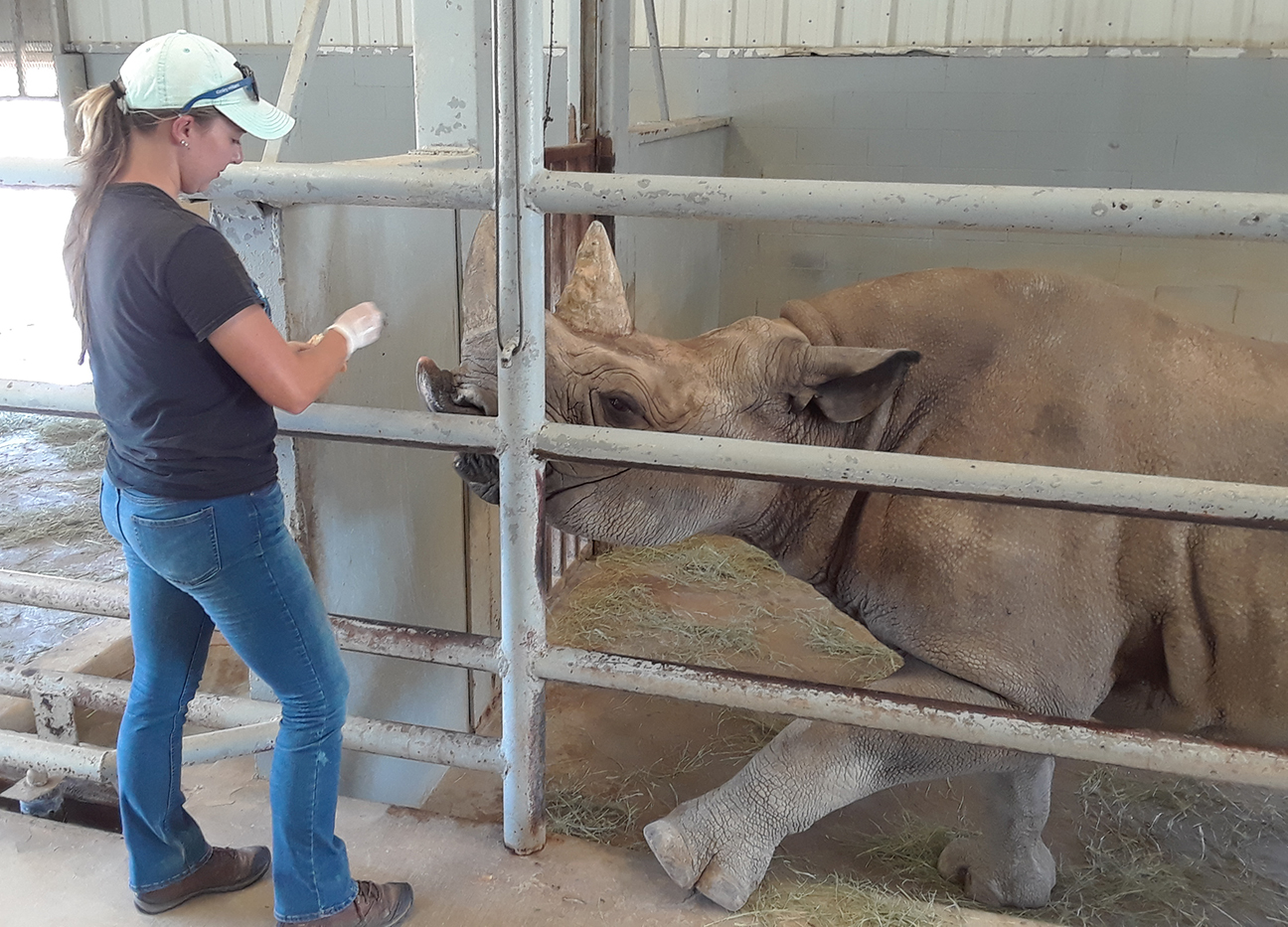 Taken directly from Fossil Rim’s mission statement, this article spotlights the “training of professionals” aspect with the help of Executive Coordinator Kristen Hannah.

Last, but certainly not least, the Animal Health Veterinary Preceptorship is available for a six to eight-week period and the applicant submits three blocks of time that would be feasible for him or her during the year. Preceptorship applicants should apply 18-plus months in advance.

Fossil Rim’s intern program began in 1990, while the veterinary preceptee program was added in 1996. The total number of interns and preceptees is more than 600 people in 650-plus internship slots; some people have done multiple internships or transitioned from intern to preceptee.

Hannah, who served as Fossil Rim’s intern coordinator for two-and-a-half years in addition to her role as executive coordinator, is one of those 600-plus who partook in at least one internship.

“Fossil Rim is a well-respected facility, and it was suggested to me by a Smithsonian National Zoo staff member. I am very grateful I came here.”

Those months at the facility opened her eyes to numerous, wondrous species.

“When I came here, I thought all hoofstock was just deer or fancy deer,” she said. “By the time I left a few months later, I was in love with hoofstock. I thought they were the coolest animals with so much diversity. I learned that the rhinos have individual personalities, and I came to appreciate each one; they are still my favorite animals by far.”

Significant life changes can be daunting, but certainly, as compared to a career move, an internship decision is easier to dive into.

“I am from Pennsylvania, and I thought Texas was this scary place of desert, tumbleweeds and thick accents, but I felt I could handle it for a three-month internship,” she said. “Had I been accepted for a job here instead and needed to make a permanent move without time to adjust, I think that would’ve been very intimidating. But an internship that provides housing and covers some living expenses is much less risky, allowing you to travel a great distance and just give it a try.”

The multiple internships of her past come in handy when Hannah is answering questions applicants might have.

“Having worked in animal care and done several internships, I can better answer the questions of the candidates when they email me, even though my job is now predominantly in the office,” Hannah said. “I rely on my time as an intern, and then animal care specialist, to answer a lot of their questions. I lived in the intern house, so I also know what it is like to live onsite.”

The housing and stipend helps interns immerse themselves in the Fossil Rim experience without worrying about how they will get by day-to-day.

“Most of our interns don’t take on a second job while they’re here,” she said. “The $300 per month is enough to cover your food and gas, which allows you to be available if your hours have to fluctuate for a special procedure on your day off. If you were trying to juggle another job, that would be difficult. Sometimes an emergency arises and extra hours are required.”

Executive Director Kelley Snodgrass, who has been on staff since 1984, is impressed with the career paths he has witnessed from former interns.

Even as it has much at stake with numerous threatened and endangered species, Fossil Rim bestows great responsibility on interns to take care of their duties and do a great job in the process.

“Fossil Rim does its internships differently than other places,” Hannah said. “Most of our interns work independently for at least part of their day. We aren’t just holding their hand and walking them through everything. We are trusting them to be responsible adults and exercise quality care for these animals.

“We want to train the next generation and enable these interns to go straight into the career field. The animal care interns are responsible for feeding, cleaning, and observations so they can let let their supervisor or a vet know of something abnormal.”

The Rhino Internship is a great example of the responsibility entrusted to interns. They are often alone in a secluded part of the park caring for southern black rhinos, which are critically endangered.

“As an intern, you want to live up to that,” Hannah said. “Taking care of an animal that big can be awe-inspiring.”

While intern supervisors generally prefer candidates who have already graduated from college, it is not always the case.

“Certain internships are eligible for students who are still doing undergraduate studies, such as the Children’s Animal Center Internship, which blends education with animal care,” Hannah said. “(Supervisor) Kristina Borgstrom is usually there, and thus that internship has more supervision. It is a good bridge to other internships here, if you were interested in doing multiple internships.

“The Conservation Education Internship also gives you some animal care experience, as you take care of the ambassador animals at the Children’s Animal Center. Plus, you give tours during the education internship and are able to see different dimensions of the park that way.”

It would be a shame for an aspiring young professional to miss out on an internship opportunity simply because he or she did not carefully read directions.

“I really encourage people to read the application directions carefully,” Hannah said. “I get a lot of questions emailed to me or phone calls where people are trying to get information that is clearly listed on our website. That doesn’t make me feel very confident that they are prepared to go off working alone with these animals.

“Pay attention to the deadlines, write the correct company name and internship name. If we don’t get the information we ask for, it’s hard to process your application.”

“I’m very proud that professional training is one of the five pillars of Fossil Rim’s mission, and our staff takes it very seriously,” Hannah said. “With many of us having internship experience here, we understand how important that training was to us, and we want to impart that experience to future conservationists in this field. We believe in sharing our knowledge, and the world of animal care is very cooperative. Different facilities work closely together, and we apply that mindset to our training, as well.”