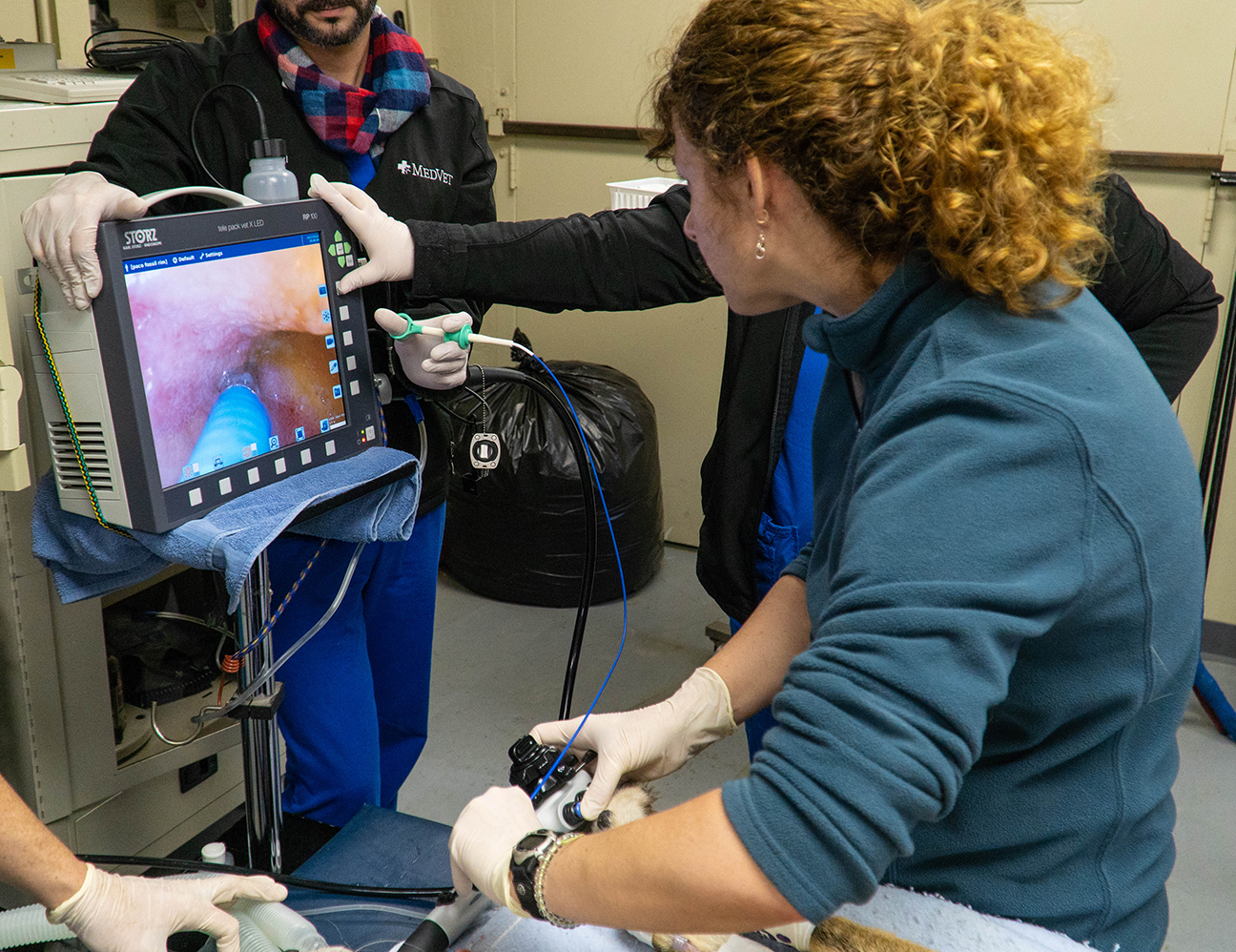 Fossil Rim has been contributing to a study on American red wolves that will hopefully improve the digestive health of the species in captivity going forward.

“In mid-March, we did red wolf exams and then performed follow-up exams in mid-October for the Point Defiance Zoo & Aquarium (in Tacoma, Washington) as part of a study on the effects of diet on inflammatory bowel disease within the gastrointestinal tract,” said Fellowship Veterinarian Dr. Rebecca Eddy. “The March exams were prior to the diet change and were done with the help of Dr. Erika Pickens, a veterinary internist at MedVet Dallas. She performed gastric and duodenal biopsies, wherein a scope is placed down the wolf’s esophagus and into the GI tract.

“At that point, small tissue samples were taken during the biopsy and they were sent to Point Defiance to be held and then tested after the study was completed. Since those initial exams, we changed their diet according to study recommendations, trying to see if the change in diet alone can reduce or eliminate the formation of inflammatory lesions within the GI tract of the red wolves. Dr. Pickens returned for the follow-up exams to collect new tissue samples to send off.”

Inflammatory gastric disease has been determined to be an issue for captive red wolves, and especially since they are critically endangered, Eddy said any change in diet or husbandry techniques that can be made to improve the collective health of the species is an important problem to solve.

Essentially, the study aims to discover if the change to a meat-based diet reduces the severity of inflammatory bowel disease lesions in captive red wolves at the end of a six-month period. Their wild diet is meat-based, after all.

“There have been studies on the digestive health of wild red wolves and, compared to the captive population, there is definitely a higher incidence of inflammatory lesions in captive wolves,” Eddy said. “Hopefully, this study can determine if the lesions are influenced by diet alone, but it may be multifactorial and include other stressors. There are no definitive answers yet, and we await the findings from the researchers at Point Defiance.”

An effort is made with Fossil Rim wolves to avoid any abrupt diet changes.

“For a diet change of any sort, there is always a transition period,” Eddy said. “For this study, there was a week of diet transition to the all meat-based diet. Our standard red wolf diets consist primarily of a limited-ingredient kibble with meat-based items and prey items, as well.”

Due to the small population of the species, it was especially important that Fossil Rim contribute to the study if possible.

“There are 43 institutions with red wolves to comprise a captive population of approximately 230 wolves,” Eddy said. “Of those, breeding wolves were not eligible and the individuals had to be able to have endoscopy performed at the beginning and following the end of the study, which narrowed down the pool. At Fossil Rim, we had two wolves that were eligible – a spayed female and a male, both of which are older. For any species, but especially a critically endangered species, it’s important that facilities cooperate and collaborate, if possible, to fulfill these research needs.”

Eddy and the animal health department as a whole make sure to never take outside assistance from people like Dr. Pickens for granted.

“It’s always exciting when we have outside help come to Fossil Rim to assist us,” she said. “Usually, these are people who are experts in their field and do these procedures frequently, so they provide a great service to our patients. They can perform the procedure at a quicker pace, but still at a high-quality level, meaning less time under anesthesia, which is safer for the animal.

“Then, you factor in that they are donating their time and expertise, which is very valuable to a nonprofit. They seem to enjoy coming to help us and often bring their own specialized equipment to aid in the procedure.

“For example, Dr. Pickens had an endoscope that was the perfect size for these red wolves – in between the sizes we have at our veterinary clinic. Additionally, it is always a great opportunity for us to learn from them, which is appreciated.”

Fossil Rim also utilizes relationships with staff from other facilities through collaboration well beyond the wildlife center’s grounds.

“Participating in studies is definitely an important way we can help support other facilities, as well as the animal species,” Eddy said. “But, we try to collaborate in other ways, as well. (Our veterinarians) Holly (Haefele) and Julie (Swenson) do go to other facilities if they are asked to help out and they are able.

If Fossil Rim’s collaboration with Point Defiance Zoo & Aquarium does result in findings that improve the quality of life for captive red wolves, it could give the species an important boost as its population continues to travel the road to recovery.