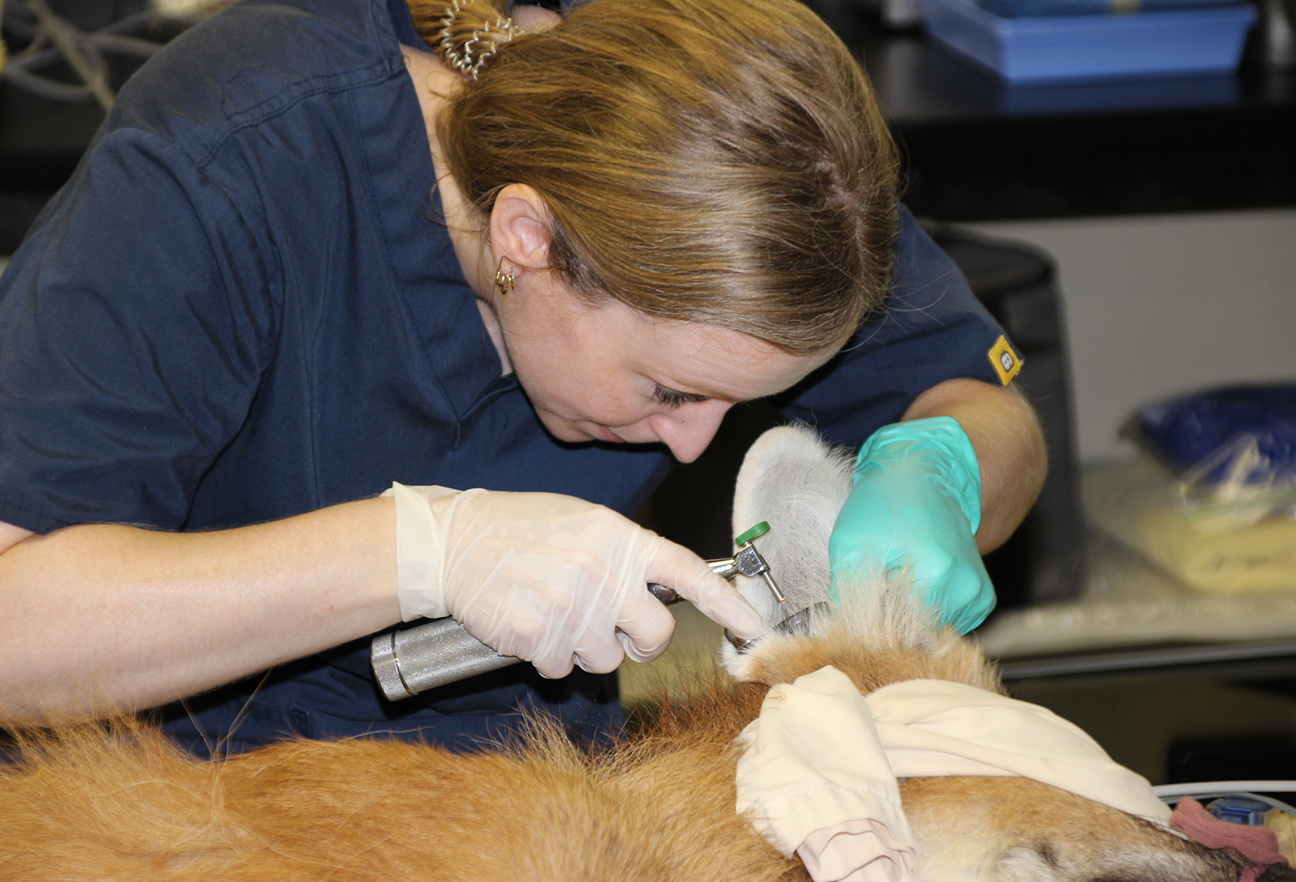 In August, Fossil Rim’s animal health department took the opportunity to perform maned wolf health exams, and it would be fair to say these omnivorous natives of Brazil are some of the wildlife park’s most challenging residents.

Sometimes referred to as a “fox on stilts”, maned wolves are actually not a fox or a wolf.

“Maned wolves are more wide-ranging eaters compared to what most people think of as a wolf’s diet,” said Associate Veterinarian Dr. Julie Swenson. “They aren’t closely related to traditional wolves. They eat a large amount of fruit in the wild, as well as vegetable matter, instead of mostly meat. In captivity, it can be difficult because this animal’s wild diet is constantly rotating among a lot of different items that are seasonally available.

“We don’t have those same items here at the same times of year or the same frequency, so we have to substitute other diet items. Finding the right balance of nutrients to provide them is difficult. It is a lot easier with our American red wolves or Mexican wolves that are traditional carnivores; there aren’t as many variables involved.

“In addition, maned wolves tend to be fairly picky eaters in captivity. So, even if a given individual receives a diet that is fairly well-balanced, it may not eat the entire portion and thus you may still struggle to provide a complete diet.”

To get an idea of the scope of this omnivore’s diet, Carnivore Specialist Tessa Townsend provided a top-10 list of items fed to Fossil Rim maned wolves beyond the kibble they all receive: ground meat, rats, chicks, eggs, bananas, apples, avocados, cantaloupes, watermelons, and sweet potatoes.

Like humans, individual maned wolves can have strong food preferences.

“Some really like eggs, while others don’t want to touch them,” Swenson said. “So, you have to find the food niche that each animal is interested in. Some are more willing to eat fruits and vegetables, and for the ones that aren’t, you need to find other sources of fiber.”

Animal health and animal care staff each know going in that maned wolves require a relatively significant amount of attention.

“You expect maned wolves to be a challenge, in terms of them reaching ideal body condition,” Swenson said. “There are a large number of research projects going on at the institutions that house maned wolves. People consider their diet items in the wild and work on formulating a nutritionally complete diet so we can maintain good body condition in this species with less effort. That challenge is in progress and will continue to be.

“I think at some point we will figure out what the best combination of items is. People eventually came up with a complete nutritional plan for domestic cats and dogs, so even for a more complicated species I believe it can be done eventually.”

For an example of an animal diet challenge eventually ending in success, one need look no further than right down the road from the maned wolves in the Intensive Management Area at the Attwater’s prairie chicken facility.

“The APC Recovery Team and Fossil Rim collaborated with the Fort Worth Zoo Nutritional Department in 2004-05 to come up with a formula that suits the needs of the prairie chicken, which was submitted to Mazuri Exotic Animal Nutrition,” said Avian Curator Janet Johnson. “They created a pellet specifically for an APC breeder diet, and another for a chick-rearing diet. The chicks also receive a specially formulated pellet, but it is different both in terms of size and ingredients.”

When the veterinary staff examines carnivores or herbivores, there are some differing considerations. Even though maned wolves are omnivorous, the fact they do eat some meat puts them on the carnivore side of the fence in this regard.

“Carnivores in general tend to have a high-protein requirement, which can predispose them to having kidney disease,” Swenson said. “So, we do spend more time on routine exams for carnivores looking at kidney size and shape via ultrasound images, plus testing bloodwork parameters to check their kidney health. That’s not nearly as common in herbivore exams.

“Meanwhile, on a herbivore exam, we might be focusing on another health aspect that tends to be more of a problem for them, such as overgrown dentition or liver troubles. Carnivores don’t have the same dental overgrowth issues since their teeth don’t continuously grow. Carnivores have a lot more problems with tartar buildup, gingivitis, and chipped or fractured teeth, so dental exams are key.

“The dental concern for herbivores is that if the diet items are too rough or not rough enough, then their tooth wear is going to be abnormal and edges of the teeth can stick out beyond what is normal, which can cause cuts and lacerations in the gums that make the animal not want to eat. It’s about the length of the teeth for herbivores, not the tartar buildup.”

On the bright side, it is much easier for the staff to know exactly what Fossil Rim’s carnivores are eating.

“Obviously, a lot of our animals here are hoofstock in large, open pastures, so they can pick and choose what they eat, but we aren’t able to monitor exactly what types of forbs and shrubs each individual is eating,” Swenson said. “I imagine there is some variety among those individuals, as well.”

The maned wolves “Vinny” and “Mac” were both examined in the same week in August.

“They appear healthy, but I would always add that maned wolves are a challenging species for animal health,” Swenson said. “They are a unique animal that evolved for a very specific niche in their (South American) habitat, which required they have a more varied diet. The more prototypical wolf carnivores evolved in a much different environment.”

“Parasites are a concern for herbivores and carnivores, but here it is easy to keep our carnivores on monthly preventive medications to limit the amount of internal parasites,” Swenson said. “For example, we can give each animal a meatball with a dose similar to the heartworm preventives given to domestic dogs. When you feed a species as individuals, it is much easier to combat parasites. For our hoofstock, we’re treating that entire group as a herd, so targeting individuals for parasite control isn’t a simple task because they aren’t receiving a monthly preventive.”

A lot goes into keeping maned wolves healthy at Fossil Rim, but it helps that the communication lines between the animal care and animal health departments are always open.

“It works really well here with the communication between departments, which is very nice,” Swenson said. “As veterinary staff, we obviously don’t see those animals every day, but the animal care staff does. They go out in the morning to check how all of their animals are doing. If they notice any problems – lameness, an animal isn’t eating, abnormal behavior – they contact us by any number of methods, depending on the urgency.

“If it seems to be a medical issue, we’ll go out with the animal care specialist and check it out. We discuss it with the specialist to get more details and recent history on how the animal has been doing, plus talk with the curator about what our options are and how we will proceed.

“Photographs taken and sent by phone are very helpful. Even if we do get to see the animal, we may not be able to see as well or see the same spot that the animal care specialist saw, so having a photograph for reference helps us know exactly what we are trying to look at in person.”

Even though maned wolves and some other Fossil Rim species can be high-maintenance to care for, the top priority is keeping the animals healthy, comfortable and in position to breed in order to ensure their future for many years to come.