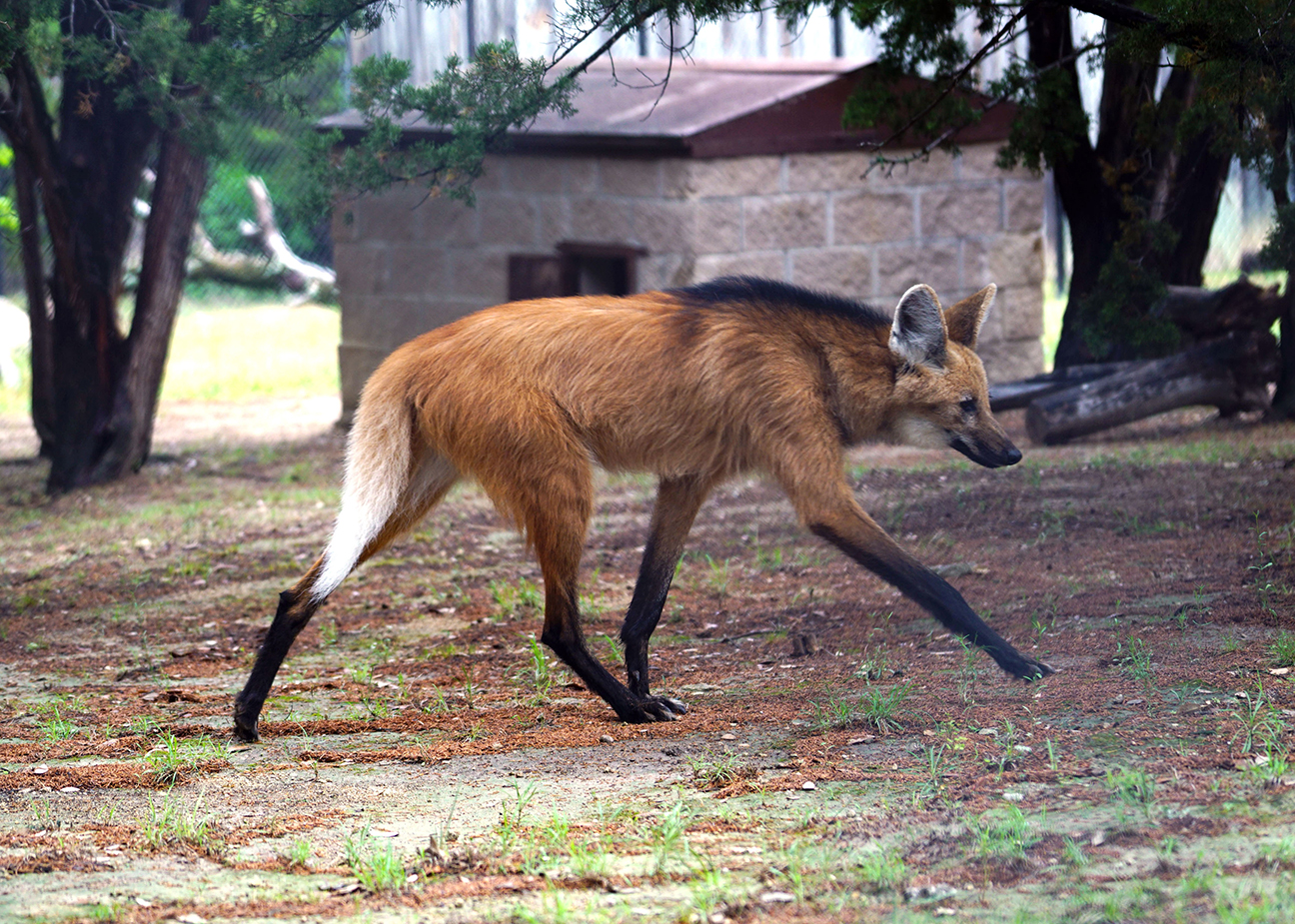 Throughout October, we are celebrating our American red, Mexican, and maned wolves. Check out this 2012 article on maned wolves penned by our Director of Animal Health Dr. Holly Haefele.

Maned wolves, Chrysocyon brachyurus, are native to South America, with the largest population occurring in Brazil. Why do they stand out?

While they belong to the same family as our well-known domestic dog, Canidae, they are the only species in their genus, and are somewhat evolutionarily distant from wolves of the genus Canis. At around 55 pounds, this very tall, red-coated creature with gigantic ears and a black mane looks more like a supermodel fox; very different, indeed, from the thick-bodied gray wolf that weighs over 100 pounds.

In South America, however, they are the second-largest carnivore after spectacled bears. But they don’t just differ from their family mates in appearance.

Even our couch-loving pet dogs have the same tendencies toward pack behavior. But maned wolves live pretty solitary lives, with the females meeting up with usually the same male for yearly breeding. The detailed specifics of how much time dad spends with the pups is still unknown, but he does appear to play some role in pup rearing.

It is easier to understand this more solitary existence when you know another odd thing about maned wolves – even though taxonomically they belong to the diverse order known as Carnivora (which includes cats, dogs, sea lions and bears, among others), they are not carnivores. They are omnivores.

Like most people, they eat meat, plants or whatever they can get their paws on. Their more typical meaty prey, like rodents and small birds, does not require a big hunting pack to take down, just a crafty, quiet hunter with big ears for locating critters in the grass. The weirdest thing they eat is actually a fruit, and it is called the lobeira (literally “wolf fruit”); it’s a relative of the tomato. During certain seasons, the wolves in Brazil eat so much lobeira it makes up over half of their diet.

Even their diseases are a bit out of the ordinary. Wild maned wolves are often host to Dioctophyme renale, the giant kidney worm.

This bright red nematode parasite grows to over a meter long and makes itself at home in the kidney, typically destroying the organ’s normal tissue. Luckily, there is usually just one kidney affected and one good kidney is good enough.

Another somewhat unusual disease predilection is the development of cystine bladder stones. This amino acid is not absorbed well by the wolf’s kidney, and thus gets excreted in the urine. Sometimes the cystine can form crystals, which can solidify into urinary stones. In domestic dogs, this condition is genetic, so the same may be true for maned wolves.