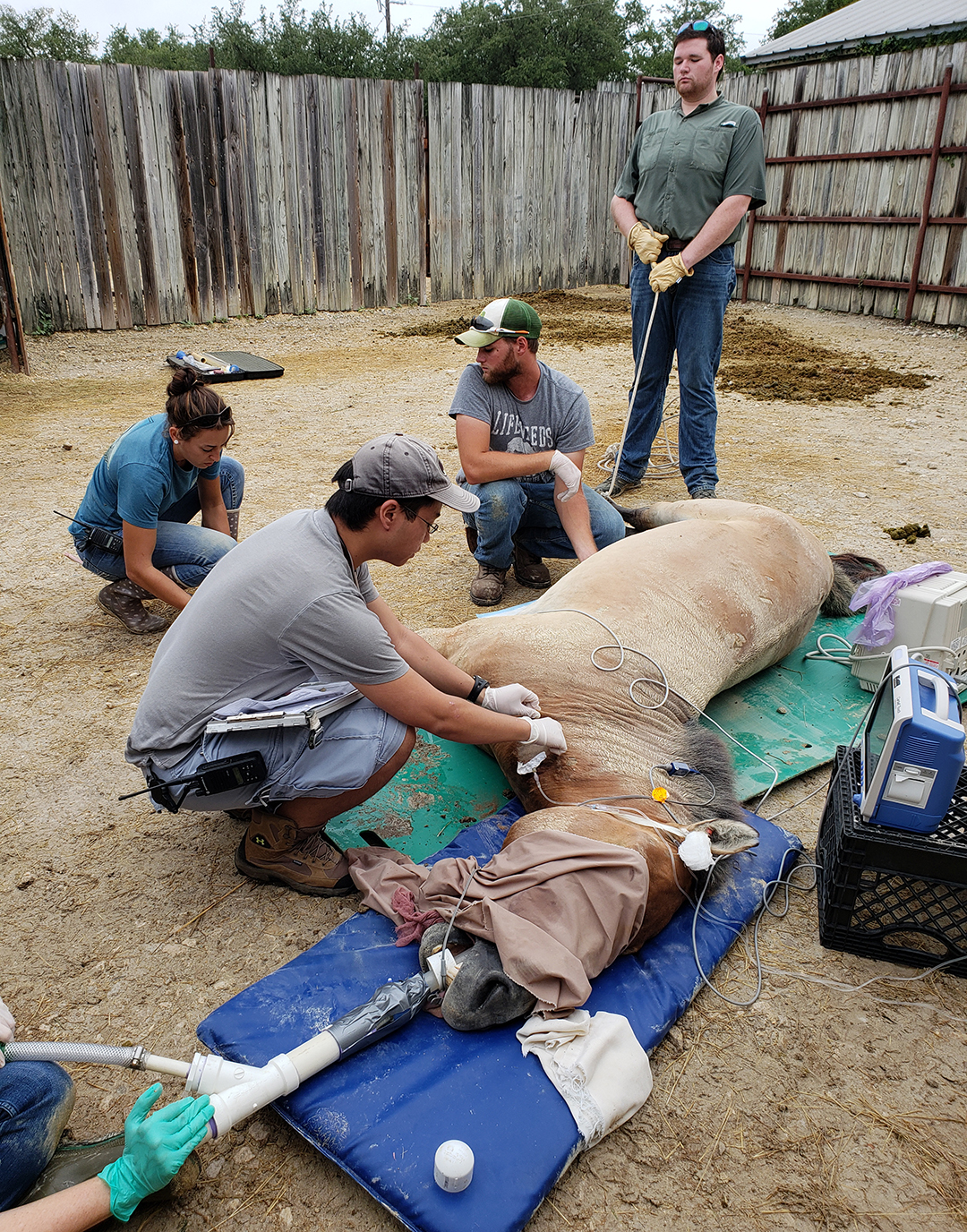 As many preceptees do, Kevin Sio had Fossil Rim Wildlife Center on his mind long before he arrived at the Texas facility.

The native of Honolulu, Hawaii was on the animal health team at Fossil Rim from Aug. 6 to Sept. 14.

“In my first year of vet school, I went to a zoo exotics and wildlife symposium at Texas A&M and (Associate Veterinarian Dr.) Julie (Swenson) was there to give a presentation on Fossil Rim and its unique management style,” Sio said. “I thought it was really interesting and that I should go visit sometime. In my second year, I went to AAZV’s (American Association of Zoo Veterinarians) conference and Fossil Rim had a table there where I met (Director of Animal Health Dr.) Holly (Haefele). We talked about the preceptorship program here, and I applied at that point in December 2016.”

Sio majored in biology during his undergrad studies at Creighton University in Nebraska. He is in his final year of vet school at Colorado State University and is set to graduate in May 2019.

“I always liked animals growing up,” Sio said. “I didn’t have realistic career goals back then; it was more about being Batman, a Pokémon Trainer, or a wizard at Hogwarts. In undergrad, I was really interested in medicine, so being able to combine that with the animal element was a plus.”

“This blew past all my expectations,” he said. “Hearing about Fossil Rim is one thing, but then seeing it in person is phenomenal. Seeing the animals out in wide-open pastures, doing their own thing and not being confined was memorable when I arrived here.”

It became evident what Sio’s favorite animals are at Fossil Rim.

“Being able to see a (rhino) calf when it was only a couple of days old was very memorable, because not many people get that opportunity,” Sio said. “When ‘Jiwe’ got sick (in August), doing a knockdown and trying to give him IV fluids was an interesting challenge. I also really like rhinos, so that’s probably why those are the first experiences that come to mind. I worked mainly with the white rhinos when I was here.”

Shortly before returning to Colorado, Sio gave a presentation to Fossil Rim staff and volunteers.

“I did a presentation on pain management, going over the pain pathway in animals, how we can recognize their pain, using a pain scale to score what they are feeling, going over the different drugs and the pathways they take to mitigate pain,” he said. “Understanding the pain an animal is in can help a vet address it, from a quality-of-life standpoint. The levels of medication need to be adjusted according to where they fall on the pain scale.”

Sio tried to capitalize on the opportunity to learn from the animal health team during his time at the facility.

“They definitely made sure I had hands-on experience, so every time there was an opportunity to do something they let me in on it,” he said. “They would quiz me about the procedures we did and the animals involved, which helps me make sure that I understand. (Senior Animal Care Specialist – Hoofstock) Justin (Smith) took me out for a morning with him, showing me what animal care does.

“He talked about what he can do from an animal care perspective to help the vet staff regarding procedures and medication. I didn’t have to ask if we could go see the rhinos; he was taking me there anyway.”

Sio pointed to a few aspects of the preceptorship he feels will be particularly beneficial.

“Having the opportunity to do blood draws with (Veterinary Technician) Alyssa (Roberts) and then going over the test results with the vets was valuable experience,” he said. “I also really appreciate all the anesthesia experience, since Fossil Rim does a lot of immobilization compared to most other facilities.”

As he returns to school for the final stretch, Sio’s professional pursuit is within reach.

“I do want a career in zoo and wildlife medicine, and the traditional way to get there is to do a rotating internship, residency, and get board-certified,” he said. “That’s the route I’m looking at. In the short term, I’m interested in a veterinary position anywhere because it’s such a competitive field and the opportunities are valuable.

“But, I would like to go back to Hawaii at some point. It’s where all my family lives.”

When asked what he would want future preceptorship applicants to know, Sio chose a seldom-seen term meaning “wonderful”.

“The experience is supercalifragilisticexpialidocious,” he said.