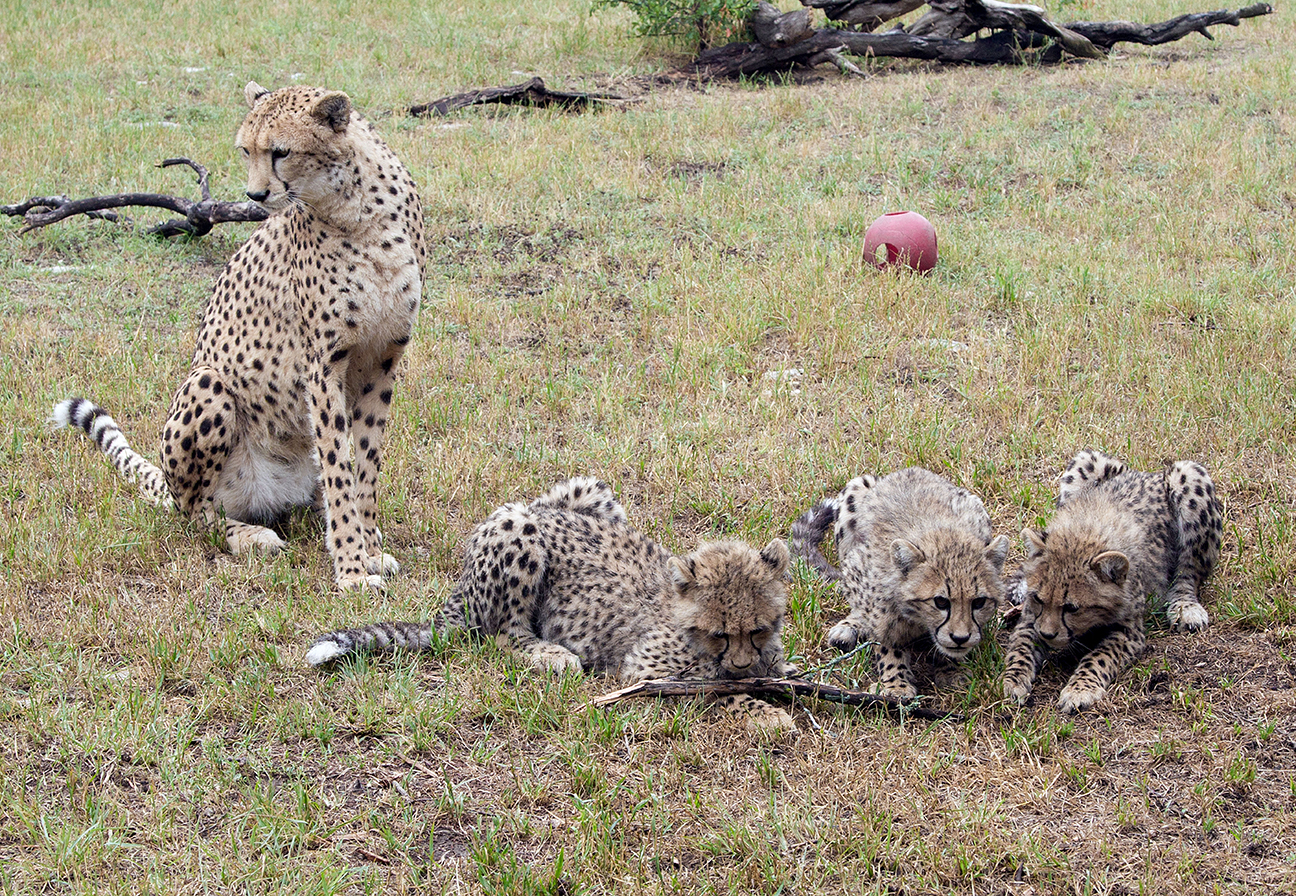 Conservation Centers for Species Survival (C2S2) was created in 2005, moved its central office from Smithsonian Conservation Biology Institute (SCBI) to Fossil Rim in 2014, and then received 501(c)3 status and hired its first executive director in 2015. This blog provides an overview of the 2017 C2S2 Annual Report with a few Fossil Rim factoids included. The organization has been extremely busy, so be prepared to pivot to conservation updates on many different animals. To learn even more about C2S2, check out http://conservationcenters.org/.

“Our activities in collaboration with conservation centers, private landowners and affiliate zoos are growing populations and space, optimizing reproduction and genetic diversity, and returning species to the wild when possible,” said C2S2 CEO Katy Palfrey.

One of C2S2’s efforts to grow endangered and threatened species populations is through the Cheetah Sustainability Program (CSP). The Breeding Centers Coalition (BCC) achieved a record 91 births among 18 litters during 2017.

That actually marks an increase of 103 percent in cub production for the BCC in 2016. The BCC population has grown 17 percent to 338, reversing the previous downward trend.

In 2017, Fossil Rim managed between 25-30 cheetahs at all times and produced 13 cubs from three litters. The carnivore staff managed to successfully cross-foster a singleton cheetah cub into one of Fossil Rim’s preexisting litters.

Unfortunately, the worldwide cheetah population has declined from 25,000 in the early 1980s to approximately 7,100 today living in just 23 percent of their historical range. A healthy and genetically diverse population secured in North America may be the species’ best chance for long-term survival.

C2S2 provided GoPro cameras and mounts to each breeding center, which helps facilitate knowledge sharing, training on procedures, behavioral and health issues, as well as capturing footage of cubs for communication materials. C2S2 is using genomics to optimize population management with future plans to transport animals between the U.S., Australia, and Canada to grow genetic diversity.

In October, SPA added six species to its portfolio – Arabian oryx, bongo, roan antelope, Grevy’s zebra, banteng, and anoa. Thanks to growing financial support from sources like the Mark Paul Terk Charitable Trust, C2S2 was able to add a staff member with the hiring of SPA Manager Gavin Livingston, who works out of Fossil Rim, in August 2017.

C2S2’s partnership with SCF enables SPA to move toward a One Plan Approach for target species where ex situ (in captivity) and in situ (in the wild) efforts are linked to create a truly sustainable global population.

The initiative is modeled on successful recovery efforts for the loggerhead shrike and grasshopper sparrow by C2S2-member organizations. C2S2 conducted a songbird conservation workshop at SCBI in February. “Shrike Force” founder and Fossil Rim Director of Education Tessa Chenoa Ownbey was one of the presenters of the case for expanding the Shrike Force statewide at the Texas Master Naturalist Annual Meeting last October.

In July, C2S2, the U.S. Fish and Wildlife Service (USFWS), and others participated in a workshop at White Oak Conservation to strategize achieving common goals for the American red wolf. USFWS added staff dedicated to red wolves and confirmed commitment to red wolf conservation at the workshop.

C2S2’s initiative is focused on saving the red wolf from extinction and enhancing success of future reintroductions will require a larger captive population (currently approximately 244), among other factors. In 2017, nine facilities tentatively agreed to build approximately 40 new enclosures to accommodate up to 252 additional red wolves. C2S2, SCBI, and Endangered Wolf Center coordinated on a red wolf research workshop to identify and prioritize the most critical research needed to support recovery of the species.

In 2017, Fossil Rim increased its role in the red wolf program by dedicating more space to red wolves and bringing in two new animals, which helped to create a new breeding pair.

The goal within the Red Wolf Species Survival Plan (SSP) is to increase the population to at least 330 wolves in the next three years.

With a population that once declined to 16, whooping cranes have rebounded from near extinction through collaborative conservation. When severe budget cuts caused the elimination of the entire breeding program at Patuxent Wildlife Research Center, several C2S2 facilities swooped in and will provide new homes to 75 whooping cranes for research, breeding and, eventually, reintroductions.

There are four southern black rhinos at Fossil Rim.

Over the past year, C2S2 has provided consultation and advisory support to Amazon Forever, a nonprofit in Peru focused on Amazon conservation. In June, a team from Fossil Rim, SCBI and C2S2 visited the 25.4-acre white sand forest location in Peru where a future Amazon Forever biopark is to be located. C2S2 is developing a business plan for the organization.

Palfrey and Dan Beetem of The Wilds traveled to Australia to lead a workshop at the ZAA meeting, which focused on the approaches C2S2 takes to create sustainable populations and whether a similar approach could benefit species sustainability efforts in Australia.

At the 2017 C2S2 Annual meeting, which was hosted by Fossil Rim, attendance was up 55 percent from 2016, as 85 representatives from 41 conservation and zoological organizations converged. The goal was to bring together stakeholders from a wide range of groups to talk about some of the biggest challenges in conservation today and how resources can be more effectively applied through collaboration. Representatives from the scientific community, private ranches, zoos, and other conservation groups spent the two-day meeting communicating, strategizing, and networking.

Since 2005, C2S2 has been working to facilitate greater collaboration and science-driven programs that can save species on a large scale. From Fossil Rim to Australia and beyond, Conservation Centers for Species Survival continues its mission to ensure a future for animals large and small.