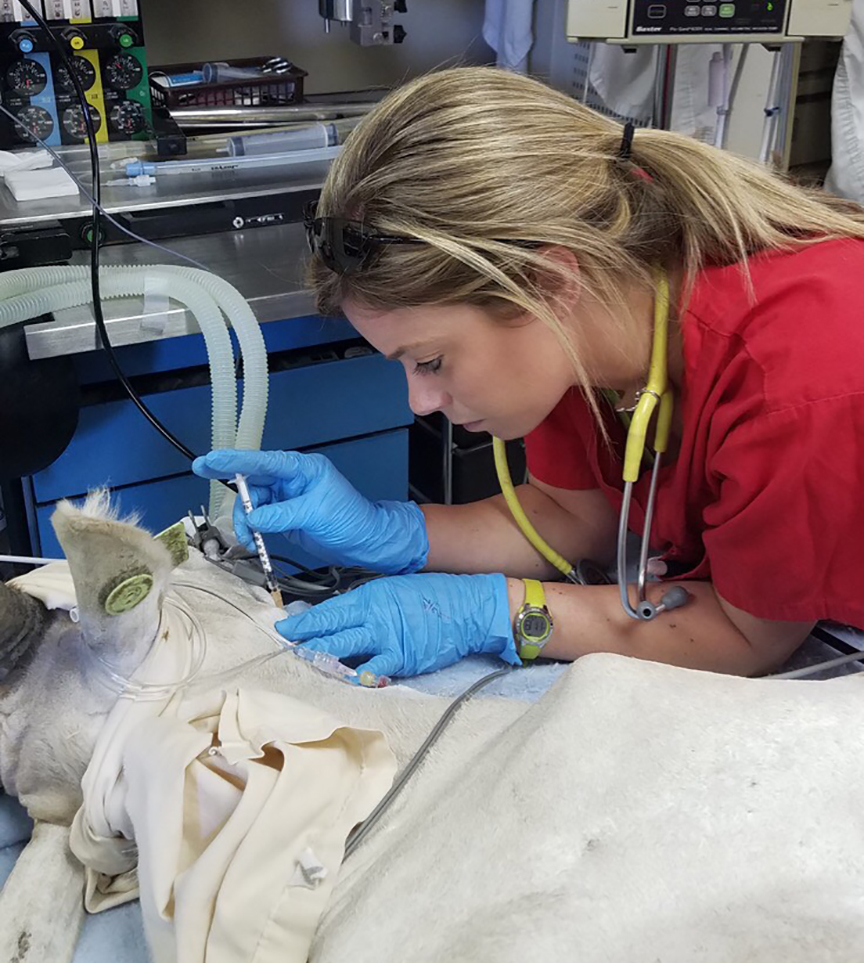 Over an action-packed five weeks, Ashley Reeves capitalized on her veterinary preceptorship at Fossil Rim.

The native of Eads, Tennessee was at the wildlife center from June 18 to July 27.

“I did not realize how big (this facility) is, or how much conservation they are involved in here,” Reeves said. “I liked that a lot – learning how big species populations are managed with the goal of reintroduction in some cases. It’s a very hands-on experience here, so it’s pretty special. I’d never been to a conservation center in the U.S. before.”

Reeves graduated from Mississippi State University with an undergrad degree in biology. She is now in her fourth year – clinical rotation year – of veterinary school at the University of Tennessee, and is set to graduate in May 2019.

“I was at a tailgate party before a football game at the University of Tennessee, and we’d invited other area vets to join us,” she said. “We were giving this lady a tour of the campus, and I told her I was interested in exotic animals. She mentioned Fossil Rim. Then, when I went to Lion Country Safari last summer, Dr. Beth Hammond, a staff veterinarian, told me she had gone to school with (Fossil Rim Director of Animal Health Dr.) Holly (Haefele) and that I should go to Fossil Rim.”

With three veterinarians and a veterinary technician in Fossil Rim’s animal health department, there were a lot of people available to facilitate Reeves’ learning.

“I thought they were awesome,” Reeves said of the people she worked with daily. “It’s not often that you find a team that asks for your opinion. As a young student, I appreciated that they really valued my opinion when they asked for it. If I was wrong, they didn’t make me feel stupid, because I am still learning.

“I wasn’t just a shadow; they really involved me in the conversation and let me do things I was comfortable with. They asked me questions to challenge my knowledge.

“They were all really nice. I felt like I was riding around with my friends, doing what we love, treating animals all day.”

Reeves recalled some of her most memorable experiences as a Fossil Rim preceptee.

“I’m really interested in reproduction, so the electroejaculation study on the addax was memorable – learning the differences from the procedure on cattle I’d been a part of elsewhere,” she said. “I really liked being a part of the cheetah x-rays, seeing how the cheetahs were conditioned after a couple of weeks to tolerate the process. I also really enjoyed the training for performing an ultrasound on a rhino.”

Often, when a preceptee or intern references memorable experiences at Fossil Rim, at least one of them involves a species the person is especially fond of.

“I love all the animals here, but the cheetahs are probably my favorite,” she said.

Reeves discussed a project that she did a presentation on shortly before her time at Fossil Rim ended.

“My main goal was to determine a way to test for pregnancy earlier in the gestation of the American marten in order to have more reproductive success,” Reeves said. “Then, use the protocols and methods for this study on other animals that are having trouble reproducing in captivity and are going to be reintroduced into the wild. The polar bear population is a good example of a species this study might help. This is a topic I have been interested in, so even though the marten isn’t an animal at Fossil Rim, I used a paper on cheetahs to come up with my methodology and that’s how I related it to Fossil Rim.”

Most preceptees and interns take the opportunity to shadow staff in other departments to get as much as possible from their Fossil Rim experience. Reeves jumped at the chance to learn from the animal care staff.

“I did two shadowing sessions with Becca (McLachlan) and (Alex) Sharkey,” Reeves said of hoofstock and carnivore experiences, respectively. “I thought it was really nice of them. When you have a routine, it’s not ideal to bring someone in who doesn’t know what they are doing and then teach them what you do. I respected that they allowed me to come along and see the hard work they do.

“I got to do some of the physical work they do, and I wanted to know how they felt at the end of the day. When you ask someone in animal care to do something, you want to understand if it’s feasible.

“People in other departments can shadow animal health. I think it’s a good way for everyone to understand each other’s jobs. Everyone here works really well together, and I think it’s helpful to understand what others are doing and how important they are to Fossil Rim.”

Gaining practical experience so her career can blossom is crucial, and on that note Reeves pointed to some specific ways her time at Fossil Rim could pay off professionally.

“First, I’d point to anesthetic protocols,” she said. “It’s really hard to know every drug and what it’s going to do, especially for such a wide variety of species. The vets let me write all of the protocols after looking them up so that I could learn.

“I learned about jugular catheters here, which is something we don’t get to do much of at school. Being able to insert one of those quickly will be very helpful.

“I practiced shooting a (tranquilizer) dart gun at targets. It is a lot different than a regular gun, and the dart is weighted with fluid. It’s not something you do at school.”

While she will be focused on veterinary school through next spring, Reeves can see the professional path she aspires to follow.

“I’m going to return to school and finish my clinical rotations,” she said. “I have an externship at a zoo in February, and will then graduate in May. I had a bit of a setback due to a health issue, but I’m going to finish my PhD while I do some emergency relief work – keeping myself in the clinical realm.

“After that, I’ll be looking for zoo and wildlife internships and then on the job hunt. I definitely want to work with exotics, but for the first couple of years I may be working primarily with domestic animals.”

Even if they are used to a certain way of doing things, Reeves hopes future Fossil Rim preceptees will be open to new techniques.

“Definitely keep an open mind to teaching,” she said. “Even though you may have been somewhere else where a procedure is done differently, that doesn’t mean it’s the only way. Especially here with all of the different species of animals, there isn’t a rule book like you’d have for dogs and cats. Be able to keep moving all day and go with the flow.

“Things change rapidly here; there is not a strict schedule in wildlife medicine. You need to be down for whatever needs to be done that day.”

Just as she was surprised how much Fossil Rim as an entity invested itself in conservation, Reeves thinks visitors new to the park will be pleasantly surprised, too.

“I think conservation is really important, and Fossil Rim does a great job of that,” she said. “This place is a great representation of what we should be doing for species that are in danger. Being here and seeing what is happening for yourself is important.”