Xena growing in size and curiosity 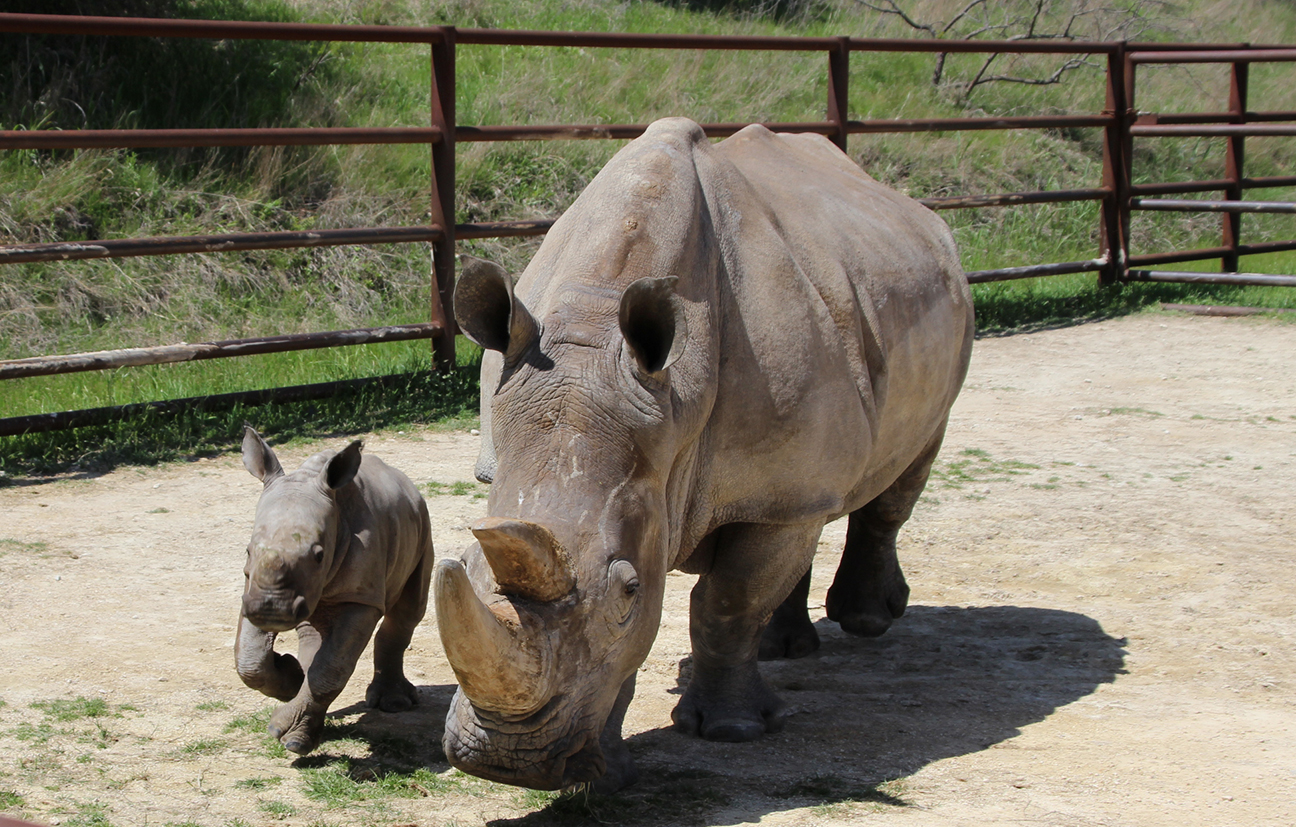 Most people know “Xena” as “The Warrior Princess” from the fantasy television series filmed in New Zealand from 1995-2001.

But, thanks to Dr. Bruce Stuckman, there is another Xena to take note of. In Austin at the Paramount Gala in May, Stuckman made the winning bid for a package that included an African safari and the naming rights for a female southern white rhino calf at Fossil Rim Wildlife Center. That calf, born Feb. 17 to “M’Bili”, lives with her mother in the yard adjacent to Fossil Rim’s main White Rhino Yard.

“I think the name fits her personality, in terms of the Greek translation,” said Fossil Rim Lead Rhino Care Specialist Justin Smith. “She is pretty outgoing, inquisitive and seeks out attention from animal care personnel.”

Smith appreciates the interest of people like Stuckman who want a say in naming Fossil Rim animals.

“Bidding on the naming rights for our animals is a great opportunity for (Fossil Rim and a donor),” he said. “They get to name an animal, a rhino calf in this instance that could live 40-plus years, and their choice will stand for generations. As far as Fossil Rim, we’re a nonprofit and every penny counts.

“We are very active within the rhino conservation community, so what proceeds don’t go directly to Fossil Rim will go toward rhino conservation. I’m curious to meet (Stuckman) and learn why he made that name decision.”

Although Fossil Rim’s 10 rhinos (6 white, 4 black) are dwarfed by some of the park’s other species in number of animals, they definitely rank among the most expensive to care for.

“Just the feed alone for rhinos is expensive, and then you consider the staff time needed to care for them; they can be a very labor-intensive animal that requires significant financial investment,” Smith said. “But with the current poaching epidemic since 2007, they need our help more than ever.”

“We just increased the amount of pelleted feed in one pile for Xena and M’Bili,” Smith said. “She doesn’t get her own feed yet, but she’s eating enough from the pile that we wanted to increase it. She eats grass as much as possible, while her nursing is decreasing, which is typical as a calf gets older. She’s been drinking water for about a month.”

The transition for the pair to the main White Rhino Yard with the other adults and 17-month-old “Jiwe” will be based on Xena’s size.

“She will have to get about twice as big as she is now before they make the move,” Smith said.

In addition to Smith, other primary caretakers for Xena include Tim Lloyd, Becca McLachlan and Arnulfo Muro. Fellow hoofstock staff members who are also involved are Adam Eyres, Ben Jernigan and Molly Shea.

“Xena is getting a lot more inquisitive and more willing to move away from M’Bili and do her own thing,” Smith said. “While M’Bili is feeding, I’ve seen Xena go out and wallow (in the mud), so she is exploring her surroundings more independently. She still very much needs M’Bili, and she will for well over another year.”

“I’m very proud of M’Bili,” Smith said. “She is being a fantastic mother, and I’m happy she was able to conceive another calf. It was a very big stretch of time between her second and third calf, and there were a lot of variables involved to improve her chances based on current research being done.”

Dr. Stuckman will be visiting Xena this summer, as she continues to grow and learn about life at Fossil Rim.

1 thought on “Xena growing in size and curiosity”