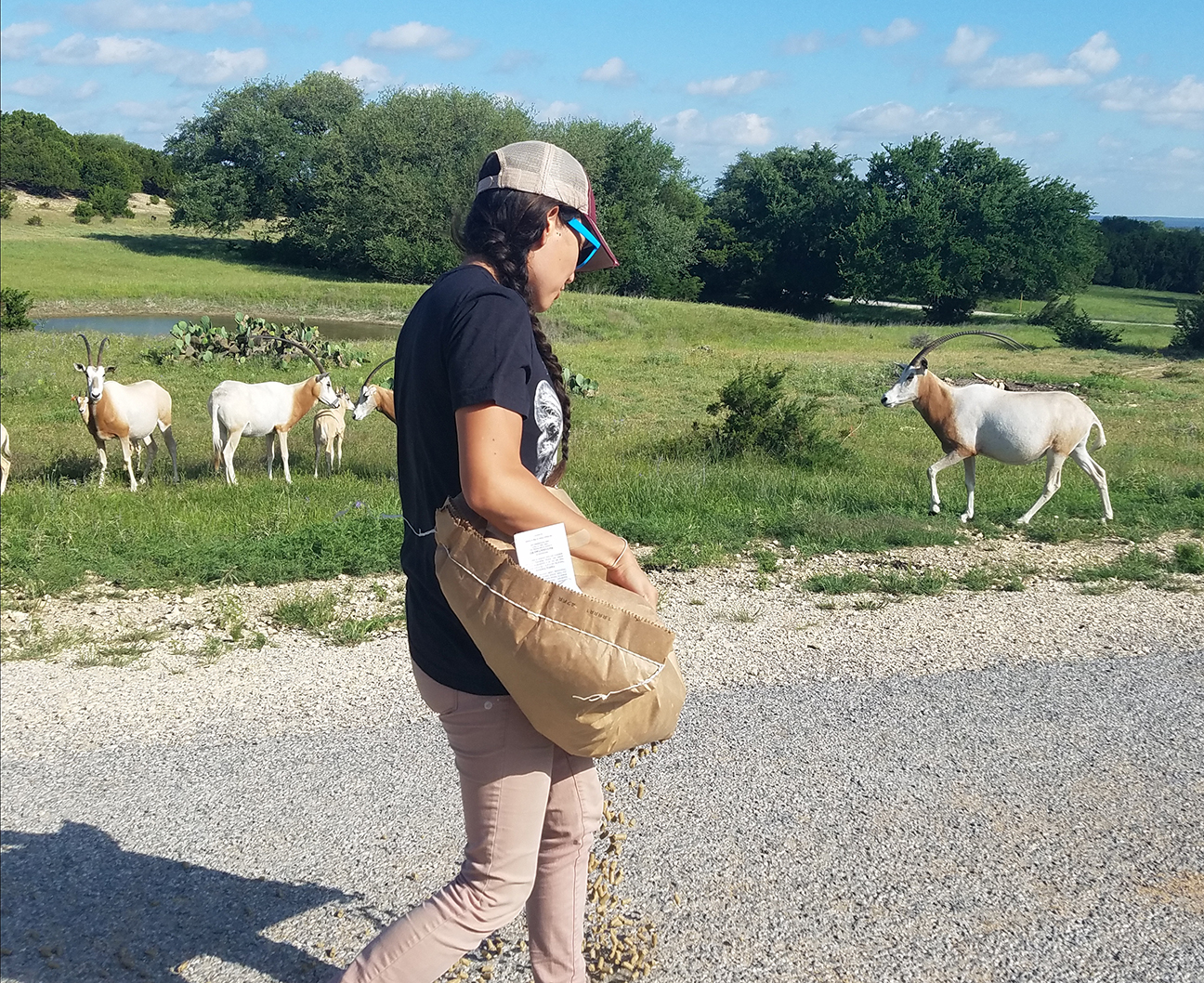 It would be fair to say that Allee Jimenez has enjoyed her time as a Fossil Rim Wildlife Center Behavior Research Hoofstock Intern. The Los Angeles County native has been in no hurry to head off to her next adventure.

She got started on Jan. 4 and her last day was supposed to be May 11.

“I’m staying until late June when my sixth-month lease runs out,” she said. “Plus, I like it here, so I figured I would stick around. I don’t want to leave, and I’m thankful they allowed me to stay.

“During my last internship at Topeka Zoo, I was looking for a place to apply. One of the keepers suggested Fossil Rim, and I actually got my application in the night it was due. I feel pretty lucky about that.”

An experience from her high school days set in motion Allee’s journey that eventually led to Fossil Rim.

“My interest started with the environment in general,” she said. “During high school, I worked for a summer in a South Dakota national park. I got to see wildlife biologists in action studying elk, and I thought it was the coolest thing ever. It was then that I planned on studying wildlife in college.”

Jimenez attended the College of Environmental Science and Forestry in Syracuse, where she graduated with a wildlife science degree in December 2015.

“It was a very specific college, but had a fantastic wildlife program,” she said. “I knew it was for me.”

Allee said she’s gotten more out of her Fossil Rim experience than she anticipated.

“It has been a lot better than I thought it would be,” she said. “Everywhere I’d worked previously has been more of a normal zoo facility, so this work was a lot different and more hands-on, which I like. I was doing fence work, dirt work, fixing pens. I felt like I was doing something for the animals.”

From a standpoint of understanding, as well as skillset, she feels more advanced.

“The conservation management aspect is such a big part of what we do here,” she said. “It’s been interesting to see animals come and go from here. The whole process of bull switching, breeding and calving. I’d never thought about that side of it before, but now I’ve been taught why decisions are made, so I feel a lot more aware of the management side of conservation.

“I think I’ve expanded the skills I could offer to an employer during my time here. I helped out a lot with the medical (activities) alongside the vets, so I’ve seen a lot more now. Plus, the physical work I’ve done, as far as maintenance around the facility, has helped me feel a lot more comfortable about using tools.”

Jimenez had as much or more to say about the staff she’s worked with as any intern previously interviewed. She primarily worked with Becca McLachlan and Ben Jernigan.

“I started out with Becca every day for my first few weeks,” she said. “She is the most excited and kind person I’ve ever met, so it was really nice to start with her. She made me really comfortable and encouraged me to ask questions, as opposed to thinking I should already know.

“She would test me on all the animals until I got to know them. Becca taught me a lot and is a lot of fun, so she can make the day enjoyable, even if a particular activity isn’t the most exciting.

“Ben is fantastic. He doesn’t make you feel below him. Obviously, he and Becca have the experience to do things I can’t, but he lets me be involved and teaches me for three of my days each week in the Front Pasture, Buffer Pasture and Pens (area). He is very encouraging, considering he was an APC (Attwater’s prairie chicken) intern here and then returned to join the staff.

“He talks about other places where internships would be helpful. I’d never been to the APC facility here, but he made the time to take me out there (in May) and show me around.”

“Molly is great,” she said. “I got to work Game Preserve (pasture) with her, maybe not as often as I would like. She knows so much about these animals; it’s crazy. She was really good about answering questions, explaining why certain things were done at medical procedures.

“I told Justin I’m not the best with power tools, but he would reassure me like ‘It’s cool; today we’re going to learn’ and sure enough, I was doing fence work and such. I also talked about my resume with him, how I could improve it and tips that would help me get hired. It was awesome to get help with my future before it was time for me to leave.”

Jimenez recalled some of her most memorable experiences from recent months.

“My first neonate exam, which was on a scimitar-horned oryx,” she said. “It was the first time I had been around a baby (exotic) animal. Even the staff here gets excited to do those exams, so I was super pumped.

“When I got to feed ‘Jiwe’ for the first time; Becca asked, and I was like ‘Of course I want to feed him! It’s a baby (white) rhino!’ It was towards the end of his bottle feeding (term). There was the milk, which he loved, but he was also getting water through a bottle, as well. You could tell he wasn’t nearly as interested in that.

“Also, we did a knockdown for a hoof trim in the Game Preserve on one of the aoudad, and I got to hold its head. I felt like I was part of the procedure.”

Usually, when interns recount memorable experiences, at least one of them involves the person’s favorite Fossil Rim species.

“I love the aoudad – both generic and Kordofan,” Jimenez said. “They are quirky and always look like they are smiling. They’re fantastic.”

In May, she shared the behavior research project she had been working on.

“We have addax, which are excellent at begging for food,” she said. “It can cause a traffic problem, and I remember the staff discussing it during my first couple of days here. I thought it would be interesting to look at. My project was about identifying the specific addax that were begging, and then trying to figure out if there was a motivation other than hunger.

“I think my findings may be able to be used in the future as decisions are made for management purposes. As many guests know, ostriches and red deer are also outstanding at begging for food.”

Jimenez is interviewing for jobs during these final days at Fossil Rim, and she is excited to see where life takes her.

“Fossil Rim has ruined me, in that now all I ever want to do is work somewhere like this,” she said. “It’s a special place. Realistically, any opportunity to work in animal husbandry is something I’m interested in, but I’ll always keep my eye on opportunities here. I would also love to continue the research aspect of what I did at Fossil Rim. I told Becca and Ben to send me an email and I’ll be (back) there.”

Allee definitely recommends the Fossil Rim intern experience, but does not sugarcoat the challenge.

“It’s going to be a lot of hard work,” she said. “Probably the best experience I’ve had, but expect to work long days five days a week. I go to sleep early like an old lady now. Time management is key, because you’re pretty independent there, and I also had my research to do, as well.”

People who have not visited Fossil Rim might want to see what has made such an impact on Jimenez.

“You are going to learn so much from seeing these animals in this setting,” she said. “It’s vastly different than seeing them at a zoo. There is a lot of hoofstock here, maybe some species you’ve never heard of. It’s special to see them in herds, because not everyone can go to Africa.”