Shea agrees with perception of her “dream job” 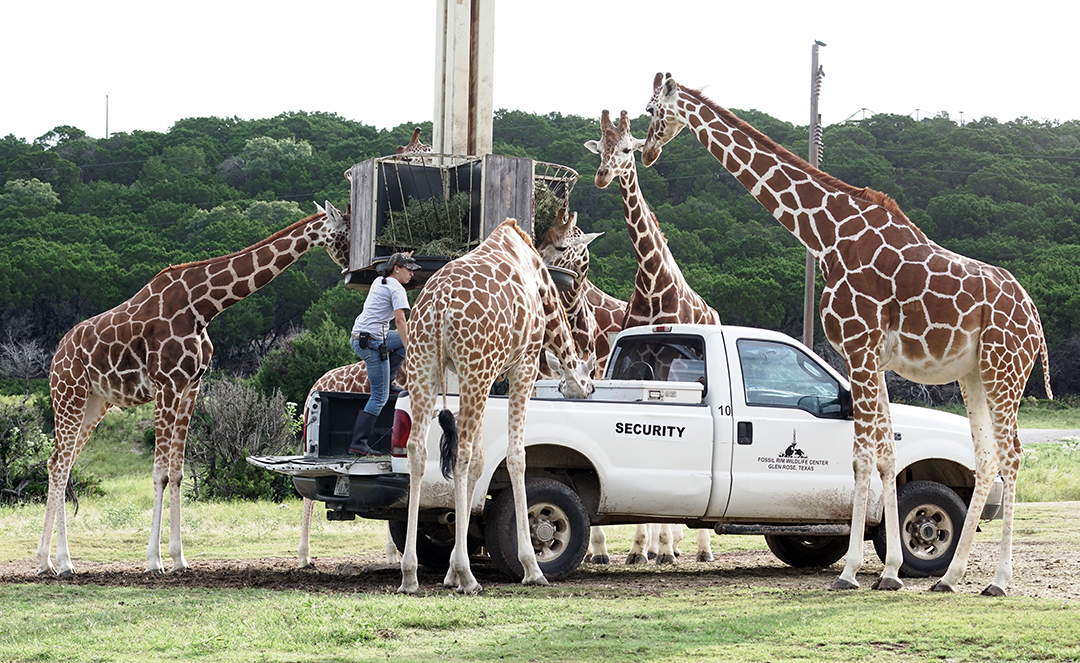 When Fossil Rim Wildlife Center Giraffe Caretaker Molly Shea is shown with the facility’s tallest residents on social media posts, it is almost a given that at least one person will say Shea has the best job in the world.

The Wisconsin native is not going to argue that point. She recalls the day the offer was made for her to take on primary giraffe duty.

“When I was interviewing, (Director of Animal Care) Adam (Eyres) said ‘So, we need someone to take care of the giraffes,’” Shea said. “I said ‘I mean, I guess so. If you really need somebody, I guess I can take on that burden.’”

To be clear, Shea had already been an intern at Fossil Rim and knew Eyres well, so her understated sarcasm was well-received. It is evident from his comments how much Eyres appreciates her efforts.

“Molly does an excellent job of working with the giraffes here,” Eyres said. “She is responsible and cares about the well-being of all the animals, plus she has done a good job of sharing her knowledge and experience with other staff, as well as guests and volunteers. She has had opportunities to attend giraffe-specific workshops over the years and has returned with new ideas for Fossil Rim to implement.”

“Getting that offer was really cool,” she said. “From the beginning here as a staff member, my focus was knowing the giraffes and working with them every day. Having them used to one person daily is really helpful when it comes to medical procedures.

“If you see them every day, you notice the slightest changes and ideally catch a problem sooner. Major giraffe procedures (like hoof trims) are so few and far between that they are scheduled on Wednesdays when (the most staffers are) here, but no matter what I’ll always be here for a giraffe procedure.”

Relating to her comment about one person working with the giraffes, the key secondary animal care staff member for the species is Becca McLachlan, and Shea trained her in that regard. Every member of the hoofstock staff has been trained in giraffe care, in case they need to step in for some reason.

Even if she did not realize at the time how large giraffes in particular would loom in her professional career, Shea apparently was always nature-driven.

“I always knew animals would be a big part of my life,” she said in a 2016 interview. “I was working at a pet store when I researched what I wanted to study in college, and my dad suggested looking into making my infatuation with animals and nature a career. I started looking at my options to better animals’ lives with a conservation purpose. Later on, I was directed to Fossil Rim by Santa Fe College Teaching Zoo where I did all my training.”

Recognizing that she wanted to work with exotic animals by the time that college came around, Shea studied zoo animal technology at Santa Fe.

“I wanted to work in a C2S2 (Conservation Centers for Species Survival) facility, because they are the places that usually have over 500 acres and large herd sizes, so I started applying to places like White Oak (Conservation) and Fossil Rim for every possible internship,” she said. “Luckily, I got started with an internship at (Fossil Rim’s) Children’s Animal Center, and then an animal care internship with our Attwater’s prairie chickens. I volunteered when possible in hoofstock and also shadowed in other (animal care) departments.

“I was determined to never, ever leave, and I suckered them into hiring me. I wasn’t necessarily the most qualified when I started, but I think they knew I could learn the rest and that I would get along with the other staff members.”

Although she practically oversees a daycare center now after four giraffes were born in 2017, Shea had only been on the job eight months when “Nyla” was born in April 2015. It was the first giraffe calf Shea had taken care of.

“To see Nyla grow is really cool, because she’s learning to be a giraffe and work with the herd,” Shea said in 2016. “I enjoy seeing all the other herd members interact with her and teach her where to go. I remember when she discovered browse, playing with the leaves in her mouth and not even ingesting them.”

It would be remiss not to mention another Fossil Rim species that Shea is heavily involved with.

“I’m the studbook keeper and SSP (Species Survival Plan) coordinator for Kordofan aoudad, plus I’m on the AZA Caprinae TAG (Taxon Advisory Group) Steering Committee,” she said. “Basically, AZA (Association of Zoos & Aquariums) breaks down the different animal groups, and there are people in charge of making the recommendations (for population management). Caprids are goats and sheep, so there are a few of us who try to encourage facilities to get more of those animals and offer our knowledge if they ever have questions. This is a new role for me, but it’s exciting.

“The goal is for facilities that have generic aoudad to switch over to a known subspecies – Kordofan aoudad. Some people don’t get excited about hoofstock, or they think they are just looking at a ‘fancy deer’, which blows my mind because I think they are the coolest. Part of what I try to do is build the public interest in hoofstock.”

Building the public interest in giraffes certainly does not require the same effort, but Shea wakes up every day ready to work hard for all species she is involved with. Just as the comments on Fossil Rim’s social media channels reinforce, she knows she is fortunate to be doing something she is passionate about.

“People always say ‘Aww, I’d love your job!’” Shea said. “I respond ‘You’re going to have to pry it away from my cold, dead hands!’ I never regret going to work. I love being outside and working with animals.

“It’s not just the giraffes; I love all of them, from the addax to sable, gemsbok, waterbuck. They’re all part of it.”

2 thoughts on “Shea agrees with perception of her “dream job””