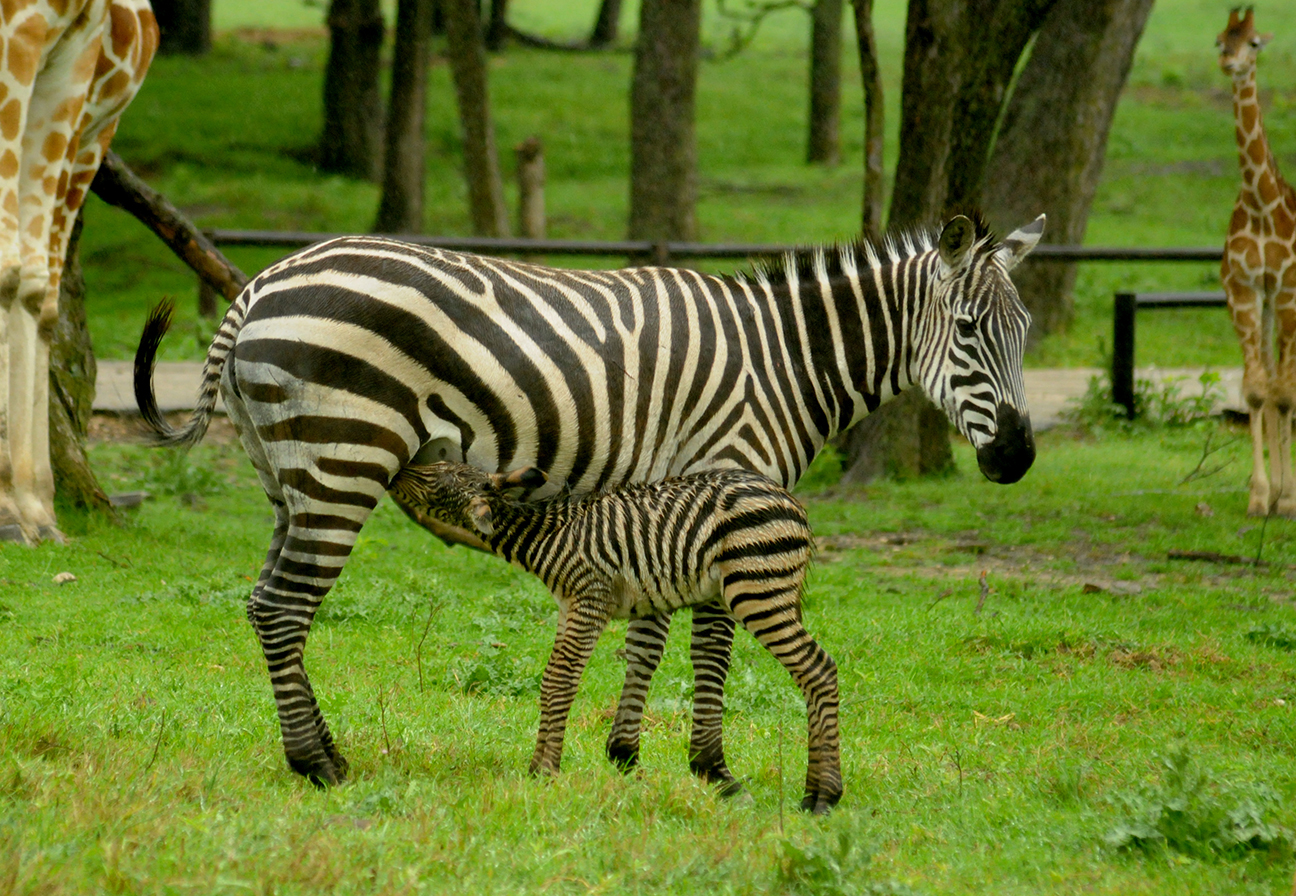 January 11 is National Milk Day! On this day in 1878, milk was first sterilized in glass bottles. At Fossil Rim, our Associate Veterinarian Dr. Julie Swenson wanted to take an animal angle and explain why milk is so crucial for young animals.

Milk is extremely important to mammalian offspring for multiple reasons. It is the primary source of nutrition for the beginning of life. In addition, the initial milk that a neonate drinks, which is known as colostrum, is rich in antibodies that help it fight off infections.

I always think it’s interesting to see how different milk is between species. We tend to think that milk is similar across species, but it’s not even similar within breeds. For example, a typical dairy goat breed, the Nubian goat, has milk that is around 4.7-percent milkfat. (For reference, normal whole cow’s milk you buy in the store typically has about 3.25-percent milkfat.)

However, other goat breeds vary quite a bit. Toggenberg goats have one of the lowest milkfats at 3.2 percent and Nigerian dwarf goats have twice as much at 6.4 percent. And the differences are even more significant when you compare between species.

Black rhinos only have 0.2-percent milkfat, but certain seal species can have as high as 60-percent fat content to their milk! Those differences have evolved over time due to the different lactation periods and growth requirements of the different species.

An animal like the rhino that will grow very slowly and nurse for a long time before it is weaned doesn’t need high-fat milk to become a giant animal. It uses the relatively high sugar content of the milk to grow slowly over time.

In comparison, that amazingly high-milkfat content in the seal species allows them to do something else which is amazing – ultrashort lactation times! As the most extreme example of this, the hooded seal has the shortest lactation period known in the animal kingdom. After an 11-month gestation period, she will give birth, but then nurse her pup for only 3-5 days before abandoning it to go back into the water to find food for herself!

You might think that’s not even long enough to be helpful, but due to that extremely high milkfat content of around 60 percent, it is very helpful. Over the course of those 3-5 days, the pup will almost double in weight from 50 pounds to about 90 pounds at weaning. Once mom leaves after those first few days, the pup is on its own to find food.

All the other components of milk vary just as much between species. Carbohydrate levels, protein levels, vitamin and mineral amounts, etc. Each species has developed its own unique recipe to create the perfect milk for its offspring.

And although the ability to produce milk for young is one of the defining characteristics for categorization as a mammal, there are other versions of “milk” in nature, as well. Crop milk is produced by certain bird species, notably pigeons and flamingos, among others.

This isn’t true milk, but it is a secretion that the birds produce in their crops that is made mostly of sloughed cells for protein, antibodies and immune stimulants, plus vitamins and minerals. This crop milk is then fed back to their young. This is one of the reasons why it is harder to rehabilitate baby pigeons and doves compared to baby songbirds. We haven’t yet created a good substitute for crop milk in orphaned squabs (baby pigeons).

In flamingos, the beautiful feather color of the adult birds is due to different pigments that are in the organisms that they eat. When a flamingo is feeding crop milk to its offspring, a large amount of these pigments get incorporated into the crop milk and the parent bird (crop milk can be produced by both male and female parents) starts to lose some of its coloration as a result. You can actually see the coloration change on the birds during the chick-rearing season.

Taking a look at marsupials, they can feed two different types of milk to two different-aged joeys at the same time! The youngest offspring can drink a high-carbohydrate milk, while the older offspring will get a higher protein and fat-rich milk that is better suited to its age and growth rate.

And lastly, but certainly not least, among these animal milk facts, egg-laying echidnas don’t have teats, but still manage to nurse their puggles (babies)! Like the other egg-laying mammal – the platypus – echidnas are able to excrete the milk from their mammary glands via openings in their skin. Both species are long-lived with low rates of reproduction and relatively prolonged parental care of infants.

During your next visit to Fossil Rim, be on the lookout for various young mammals nursing from their mothers – especially if you explore the park during springtime!