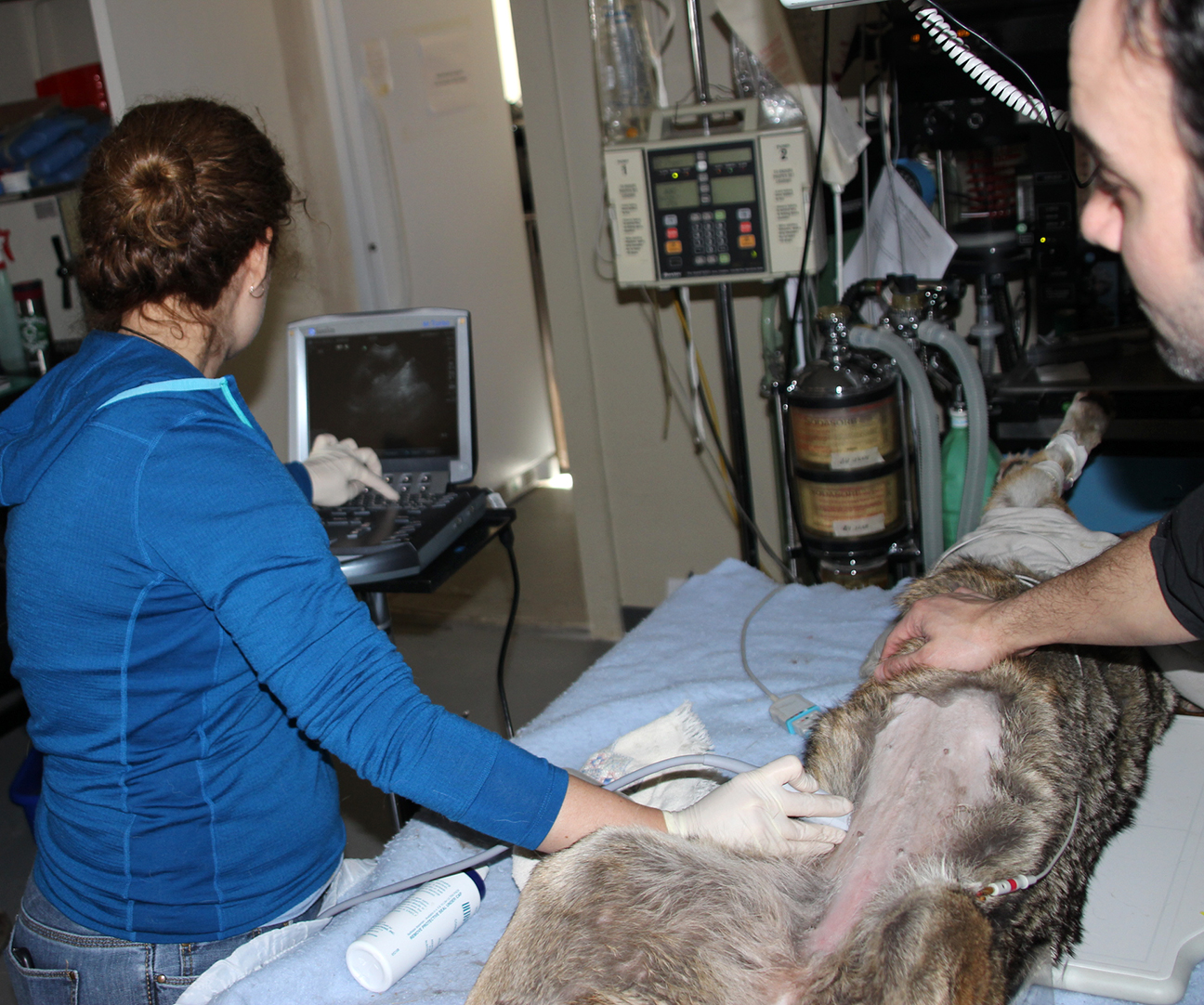 It’s not unusual that the animal health department at Fossil Rim Wildlife Center would be doing red wolf exams on a morning in mid-March.

The staff members were joined by some familiar, out-of-town guests, however, since the procedure called for more than a standard exam. Dr. Erika Pickens, a veterinary internist at MedVet Dallas, and her technician, Joel Bowman, were visiting the facility to lend a hand to Dr. Julie Swenson and Dr. Holly Haefele.

“We are contributing to a study for an SSP (Species Survival Program) project looking at red wolves because they have a very high incidence in captivity of having inflammatory GI diseases,” said Swenson, associate veterinarian. “Instead of it being diagnosed later in life, the project hopes to start tracking some of those animals before they are diagnosed in order to see if we can make changes to decrease the incidence of the disease as they go along.”

The research study is being led by Point Defiance Zoo & Aquarium in Tacoma, Washington.

The patients for the day were “Paco”, who will be 13 years old in April, and “Amber”, who turns 11 in April. The first step for each wolf was to get the aspects of a “standard exam” out of the way.

“We did a full physical – dental exam and teeth cleaning, abdominal palpitation, radiographs, ultrasound, and any vaccines or other preventative medicine they needed,” Swenson said. “We also took samples for our routine testing – mostly blood, feces and urine.”

To the untrained observer, dental exams seem to be especially important for Fossil Rim’s carnivores.

“I think a dental exam is really important for carnivores and herbivores, but it is much easier to find problems in a carnivore’s mouth because they can open their mouths so much wider,” Swenson explained. “You have a lot easier time fixing some of the issues they might have, plus preventive measures are usually more effective for a carnivore’s teeth. You get a limited visual exam when dealing with a rhino or ruminant’s mouth, for example.”

The veterinarians found most of the exam results to be consistent with red wolves of their respective ages.

“Most of what we found on the exams that would be considered abnormal are fairly expected of an older wolf, especially in Paco’s case,” Swenson said. “He has some significant dental disease and some of his joints aren’t as mobile as they used to be. Amber continues to be pretty healthy. She’s a spayed female and is part of this study because she won’t be breeding.”

The study called for fecal samples and blood samples, but also gastric and duodenal biopsies. That is where Pickens and Bowman enter the picture.

“To gather those biopsy samples non-invasively, we needed to do an endoscopy on each wolf,” Swenson said. “We have the equipment, but the procedure can be tricky, so to have the opportunity for Dr. Pickens to come down from Dallas and help us, as she has several times, is great. She does endoscopies on a daily basis, and so she can get through the process in much less time. She also did the ultrasounds on these wolves because it’s another area of expertise for her, which lets Holly and I focus on the anesthesia.”

Even though Pickens could have completed the endoscopies for them, both Fossil Rim veterinarians embraced the learning opportunity. Each one performed the endoscopy on a different wolf as Pickens observed.

“This was an opportunity to practice on something we don’t do here often that is easy to get out of practice with,” Swenson said. “Dr. Pickens watches us do the procedure on our own, and then if we hit any snags she is right there to help. The hardest part about endoscopy, especially if you don’t do it often, is the orientation of the scope, which I would compare to a very fancy remote-controlled car apparatus.

“You have dials on the handle that change the plane of the scope, so it takes some time to learn how to ‘drive’ it. Dr. Pickens helps keep track of where the scope is positioned inside the GI tract and how we should manipulate the scope to get it to go where we need it to go.”

For Pickens, this is a trip southwest of the Metroplex that she enjoys making.

“I work with dogs and cats, but I like exotics,” Pickens said. “Sometimes these guys call me over to help, which is lots of fun. I have worked with Dallas Zoo also, and one of the doctors I work with helps out at the Fort Worth Zoo. We are happy to give up our (free) time because it’s a really cool experience for us to take our knowledge from basic dog and cat medicine and apply it to similar species.”

That similarity comes in handy when Pickens is helping out at Fossil Rim.

“This red wolf is basically a big dog for me, although I do deal with some dogs larger than it,” she said. “From an ultrasound and scope perspective, everything looks the same. They are physiologically very similar. When I have worked with the cheetahs here, there are a couple of subtle ways a cheetah looks different from domestic cats.”

She was glad to be helping anyway, but Pickens discovered how exceptional her opportunity to help with red wolves was.

There are several experts in a particular animal field that live in the region and will make the drive to Fossil Rim just to lend a hand on various animal health procedures. Swenson is glad to count Pickens among that group.

“The partnership with Dr. Pickens is wonderful because she has been helping for several years now,” Swenson said. “She brought one of her technicians, Joel, with her, who knows exactly how to assist her. All of the procedures run more smoothly because we are well-acquainted with her.”

It is true that Fossil Rim’s veterinarians usually play the role of teacher and not student, but sometimes they flip the script.

“For zoo medicine, there is always more information coming out,” Swenson said. “You are never at a point where you feel like you’ve gained all the knowledge. So, having the opportunity to bring in a specialist who can help train us in something very specific is extremely useful, plus it’s a great reminder that a good veterinarian needs to continue to learn over the course of his or her career.”

Fossil Rim’s animal health department enjoys being helpful for research purposes whenever possible, and when helpful meets practical it is an ideal situation.

“Fossil Rim plays a very unique role in research projects,” Swenson said. “Many institutions have the researchers, but may not have the species that the study is about. They have the technology and the support staff to do the actual diagnostics and laboratory sections, while we have the animals. Especially in situations like these involving anesthesia when we can combine a periodic exam with getting study samples, it is an easy sample source for the people who are doing the research that they otherwise wouldn’t have access to.

“Red wolves are critically endangered, so it is more difficult to do research with them, especially in the wild. It is easier to control the research variables with a wolf in a captive situation. We want to gather the most information we possibly can, so that animal then only has to go under anesthesia once instead of twice.”

To her point, these red wolves needed a physical exam, so that was addressed on this morning while the research samples were also collected in a single swoop with minimal stress on the animals.

Many of the “institutions” with an interest in these samples collected at Fossil Rim are actually universities that educate the veterinary preceptees who will eventually travel to learn at the wildlife center during their fourth year.

“Fossil Rim works with a lot of universities such as Texas A&M, Kansas State, Wisconsin, Miami, and Florida on research – particularly universities with veterinary schools,” Swenson said. “They help with our diagnostic testing, while we provide the samples.”

When two veterinarians are responsible for the care of approximately 1,100 animals, it makes sense they would count on the support of dependable, dedicated experts and institutions across Texas and beyond.