Omnivores put the “O” in opportunistic 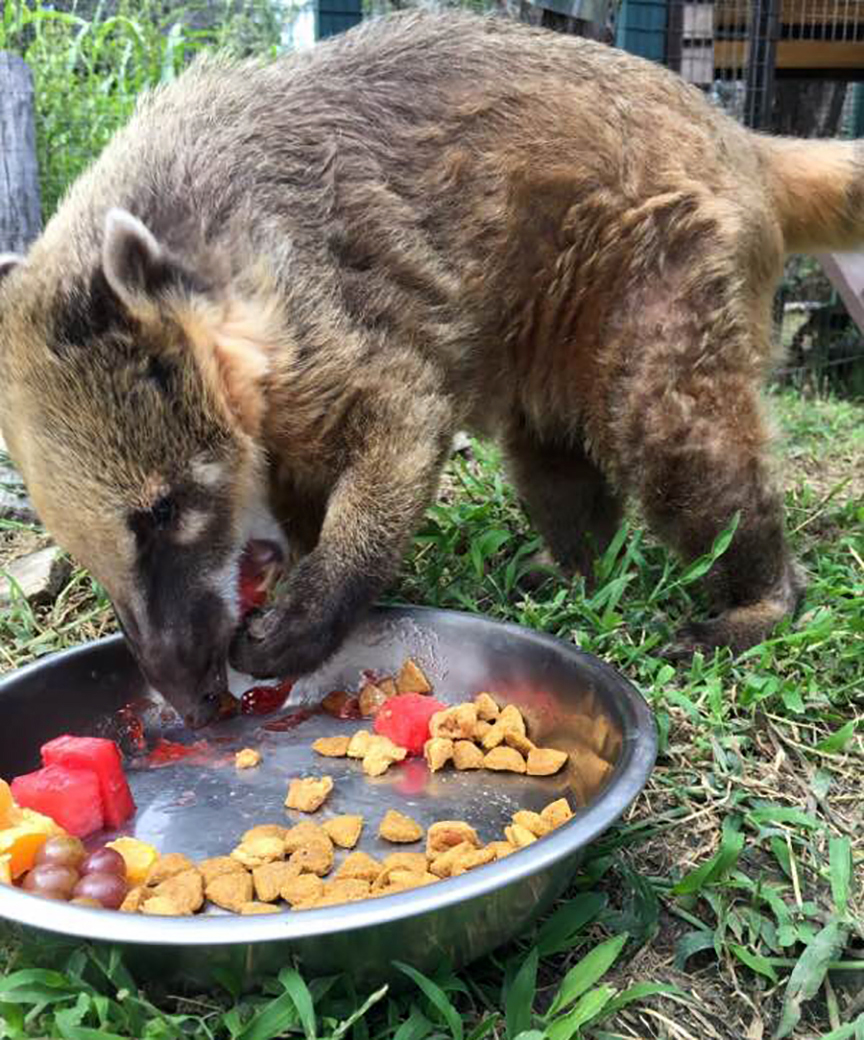 Omnivores might loom larger in the overall animal kingdom than they do at Fossil Rim Wildlife Center, but the facility is still home to a number of animals that count on both plant and animal matter for their nutrition.

“Fossil Rim is a very herbivore-heavy park, but being an omnivore is very common in the animal kingdom,” said Associate Veterinarian Dr. Julie Swenson.

It does make sense that having more options for nutrition sources would give an animal a better chance to survive.

“Not just focusing on meat or plants can give an omnivorous animal more opportunity to eat and survive,” said Carnivore Curator Jason Ahistus. “There is more seasonal variability in their diet, so they aren’t stuck searching for one prey animal or plant. A large number of mammals are omnivores.”

Look no further than “Mork”, a 13-year-old brown-nosed coati who can be seen on a Behind-the-Scenes Tour, at least when he is feeling social.

“A normal coati eats a variety of fruits and vegetables, as well as a variety of proteins,” Ahistus said. “Our coati is an ex-pet. We rescued him, so he isn’t a ‘typical’ coati; he’s very picky. To have him in a setting where he eats a well-balanced diet is difficult because he doesn’t want to eat everything we want him to.

“We supply him with dog kibble, different prey items, and eggs to cover his protein. One of his favorite food items are grapes, plus he gets a variety of melons and other fruits. He gets some dried fruits like raisins and plums, as well as a variety of nuts.

“We try to feed fruits that are in-season. They taste better, so it’s more likely he’s going to eat it. The wide variety gives us more options in the winter when fruits and vegetables don’t taste as good, but he still likes the ones he is used to enough to eat them.”

Some of these items he would encounter in the wild, and some he would not.

“A lot of coatis will eat ground meat, as our wolves and cheetahs do, but Mork doesn’t like it,” Ahistus said. “Regardless of the animal, we at least want to attempt to create a natural, nutritious diet to the best of our abilities.”

“In the wild, Mork would be eating eggs, insects, small mammals, small birds, plus berries and fruits he finds,” he said. “He is getting older, so we do everything we can to make his life the best it can be. Coatis can live up to 20 years.”

Ahistus and the carnivore department also care for maned wolves, which are actually omnivores like coatis and can also be seen on a Behind-the-Scenes Tour.

“Maned wolves are even pickier eaters than coatis,” Ahistus said. “At some point, they’ll stop eating certain items, so you want a lot of options. They have a tendency to eat something really well for a short period of time, and then not want to eat it.

“You have to be willing to try different things. In the wild, maned wolves are very seasonal eaters.

“They only eat one plant species during certain times of year, while at other times they will eat only prey items or other protein. We try to mimic that variability, but we don’t have the same resources they do in (South America).”

One of the major items for wild maned wolves is the fruit of the lobeira plant, also known as the wolf apple.

“The lobeira is a member of the tomato family,” Ahistus said. “It is actually similar to nightshade, which is toxic to a lot of animals. We don’t have access to lobeira for our maned wolves.

“It is difficult to study the diet of maned wolves in the wild because they are so secretive. Most of what we know about their diet is from scat.”

All of Fossil Rim’s wolves get eggs from time to time, but maned wolves receive them more often like Mork. The eggs are either hard-boiled or raw to provide some variety in their consistency.

Too much animal protein can be especially problematic for male maned wolves, as far as causing blockages in their urinary tract.

“Mazuri, an exotic animal feed company, created a maned wolf kibble that is primarily based on plant proteins instead of animal proteins,” Ahistus said. “That way, they don’t have as many issues with cysteine crystals forming, but still get most of the protein they need. Their diet is just really complicated, and it’s been a struggle since maned wolves have been in captivity. With that being said, the current diet plan we use for maned wolves is one of the better ones we’ve had in a long time.”

“The SSP (Species Survival Plan) for maned wolves has a nutrition advisor who is willing to help with specific cases,” Ahistus said. “It’s tough to have a species-wide diet for them because they are so variable as individuals. As opposed to the other animals cared for by our carnivore department, not all maned wolves have the same diet. At one point, we had 10 maned wolves and fed about six different diets – mainly dictated by the health issues of each animal.”

With both omnivorous species in his department being so selective in their food choices, Ahistus and his staff personally select their food sources.

“We go buy the groceries for the animals from the store,” he said. “We know what they do and don’t like, plus we’ll try new items from time to time throughout the year because of seasonal variability.”

Swenson said maned wolves are one of Fossil Rim’s best examples of omnivores.

“They are in the order Carnivora, but they evolved to eat a huge percentage of fruit in their diet, which is really unusual,” she said.

The Vietnamese pot-bellied pig – such as “Hamlet” at the Children’s Animal Center – is another prime omnivore example.

“Pigs are the quintessential survivor animals,” Swenson said. “They can survive in almost any habitat, and part of their flexibility is that they take whatever nutrition is present. An omnivore gives itself a great chance to survive with all the things it can eat in the colder months of the year.

“Hamlet is probably our most traditional omnivore. Pigs in general are a great omnivore example because they’ll eat anything they can. Pig and human gastrointestinal systems are very similar.”

“Almost all the birds we have here are true omnivores that eat everything,” she said. “In the wild, ostriches eat more meat than they do here and of our birds they are the most known for eating meat, but it’s not the primary component of their diet. The same goes for emus and cranes; they’ll eat a mouse or a frog if they can catch it, but most of the time they don’t have that opportunity.

“Diets for our emus and ostriches have the correct level of protein, so even though we aren’t feeding them meat we are still accommodating that high-protein need. Alfalfa is very high in plant protein, so ostriches and many of our other animals get it as a protein source.”

Attwater’s prairie chickens actually shift their diet over the course of their lives.

“As young chicks, they eat a lot more insects, and as older birds they eat a lot more plant matter,” Swenson said. “They make a shift from carnivorous to herbivorous, but are actually omnivorous throughout their lives. The chicks eat mealworms, crickets and a balanced, pelleted diet specific to their species that has a high amount of protein to replace the amount of insects they would eat in the wild. Wild insects are a healthier food source than those commercially produced.”

Swenson said the parrots at the Children’s Animal Center are herbivorous, while the park’s turkey vultures and roadrunners are carnivorous.

Fossil Rim may be best known for herbivores like giraffes and rhinos, as well as carnivores like cheetahs, but do not forget about those animals that can really broaden the spectrum of the nutrition they need to survive and thrive.